Excluding skin cancer, colorectal cancer (CRC) is the third most frequent cancer in the United States, with an estimated incidence of 140,250 patients in 2018, with an estimated 43,030 cases being rectal cancers (1). Moreover, CRC is the third most common cause of mortality among both sexes. However, the incidence of CRC has been steadily decreasing, largely related to colorectal screening. Gilbertsen et al. reported in 1978 that annual proctosigmoidoscopic examination and polyp removal prevented 95% of anticipated rectal cancer and, of the cancers that were identified, 80% were minimally invasive with submucosal involvement only (2). Subsequently, the National Polyp Study Workgroup published a reduction in incidence of CRC with colonoscopic polypectomy (3). Consequently, with implementation of screening colonoscopy in 1997, rectal cancer incidence has decreased overall. However, in recent studies, it has been shown that the incidence of CRC has increased among patients younger than 50 and decreasing among older patients (4). Per the National Cancer Institute (NCI), the number of young-onset (<50 years old) CRC cases have increased by about 51% since 1994 (5) Patients born around 1990 have quadruple the risk of rectal cancer compared to those born in 1950, with an incidence rate ratio of 4.3 (95% CI: 2.2–8.5) (4).

Furthermore, younger patients diagnosed with CRC tend to present with hematochezia, obstruction, and abdominal discomfort (6), and may have a 1.4 fold delay in time to diagnosis, compared to older patients (7). Additionally, younger patients with colon cancer tend to have more aggressive pathological features, including: lymphovascular invasion, T3/T4 tumors, lymph node metastases and stage III disease (8), hence they are more often diagnosed with advanced disease (9).

Until recently, CRC screening was recommended to start at the age of 50 (10,11). However, given the concerning rise in incidence of CRC among young adults, the American Cancer Society (ACS) recently updated their recommendations to start screening patients at 45 years old for individuals with average risk (12). The purpose of this study is to further investigate disparate incidence trends among young rectal cancer patients using the Surveillance, Epidemiology, and End Results Analysis (SEER) database and then evaluate survival outcomes using both the SEER and National Cancer Database (NCDB) databases. We present the following article in accordance with the STROBE reporting checklist (available at http://dx.doi.org/10.21037/jgo-20-197).

The NCDB is a database that records cancer data from >1,500 Commission on Cancer (COC)-accredited facilities nationwide. The database encompasses >70% of newly diagnosed cancer cases and reports a number of clinical parameters, including: demographics, staging, course of treatment and overall survival (OS).

In contrast, the SEER Program collects and publishes cancer incidence and survival data from population-based cancer registries covering approximately 34% of the US population. The SEER 9 (1975 to 2016) and SEER 18 (2000 to 2016) registries were used for incidence and annual percent change (APC) calculations. The specialized Radiation/Chemotherapy Database (SEER 18 Custom Data, November 2017 Submission) was used for clinical outcomes analysis (13).

The selected cohort consisted of young (<50), white or African American patients with International Classification of Disease for Oncology, 3rd Edition (ICD-O-3/WHO 2008) diagnosis of ‘Rectum’ cancer. Patients with missing or <3 months of follow-up, multiple cancers and nonmalignant pathology were excluded (Figure 1).

Patient characteristics were evaluated before and after matching by using a combination of Chi square analysis and standard mean difference (SMD), with a SMD >0.1 determined to be imbalanced (17). Univariate analysis (UVA) of clinical parameters effect on OS was performed using the Kaplan-Meier (KM) method, with the log rank method to assess for significance (18). Statistical significance was accepted at P<0.05 and 2-sided tests were used for all analyses. The following clinical parameters were evaluated: age, facility type, insurance, income, percent with no high school diploma, population density, Charlson/Deyo Comorbid Conditions (NCDB only), marital status (SEER only), percent under poverty level (SEER only) sex, year of diagnosis, grade, stage, circumferential margin status, chemotherapy, radiation therapy, and surgery.

All statistics were completed using SEER*Stat (v8.3.5, The Surveillance Research Program of the Division of Cancer Control and Population Sciences, National Cancer Institute), Joinpoint Regression Program (v4.7.0.0, Statistical Research and Applications Branch, National Cancer Institute), SPSS (v24, IBM), RStudio (v1.2.1335). The following R packages were used: survminer, survival, ggplot2, tableone, ipw, IPWsurvival, and olsrr. The study was conducted in accordance with the Declaration of Helsinki (as revised in 2013). The SEER and NCDB registries provide de-identified data. Consequently, this study does not require Institutional Review Board (IRB) review or approval. R markdown and data for all analyses are available upon request. 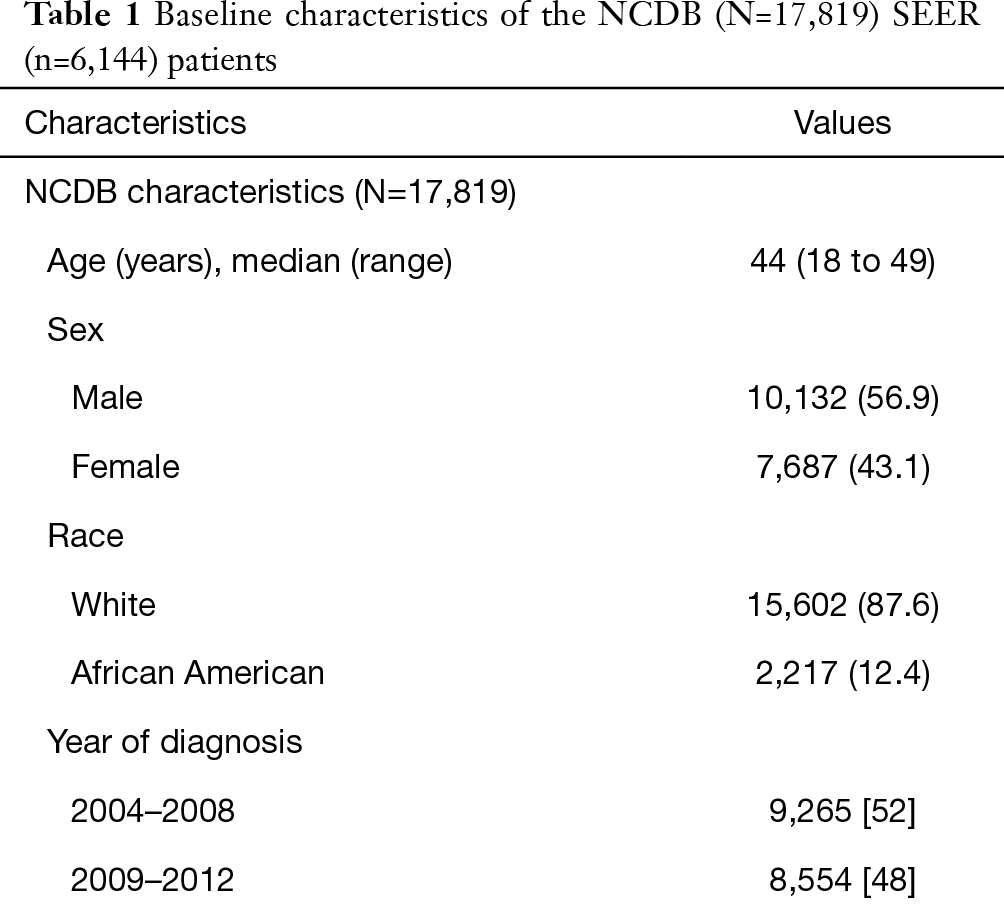 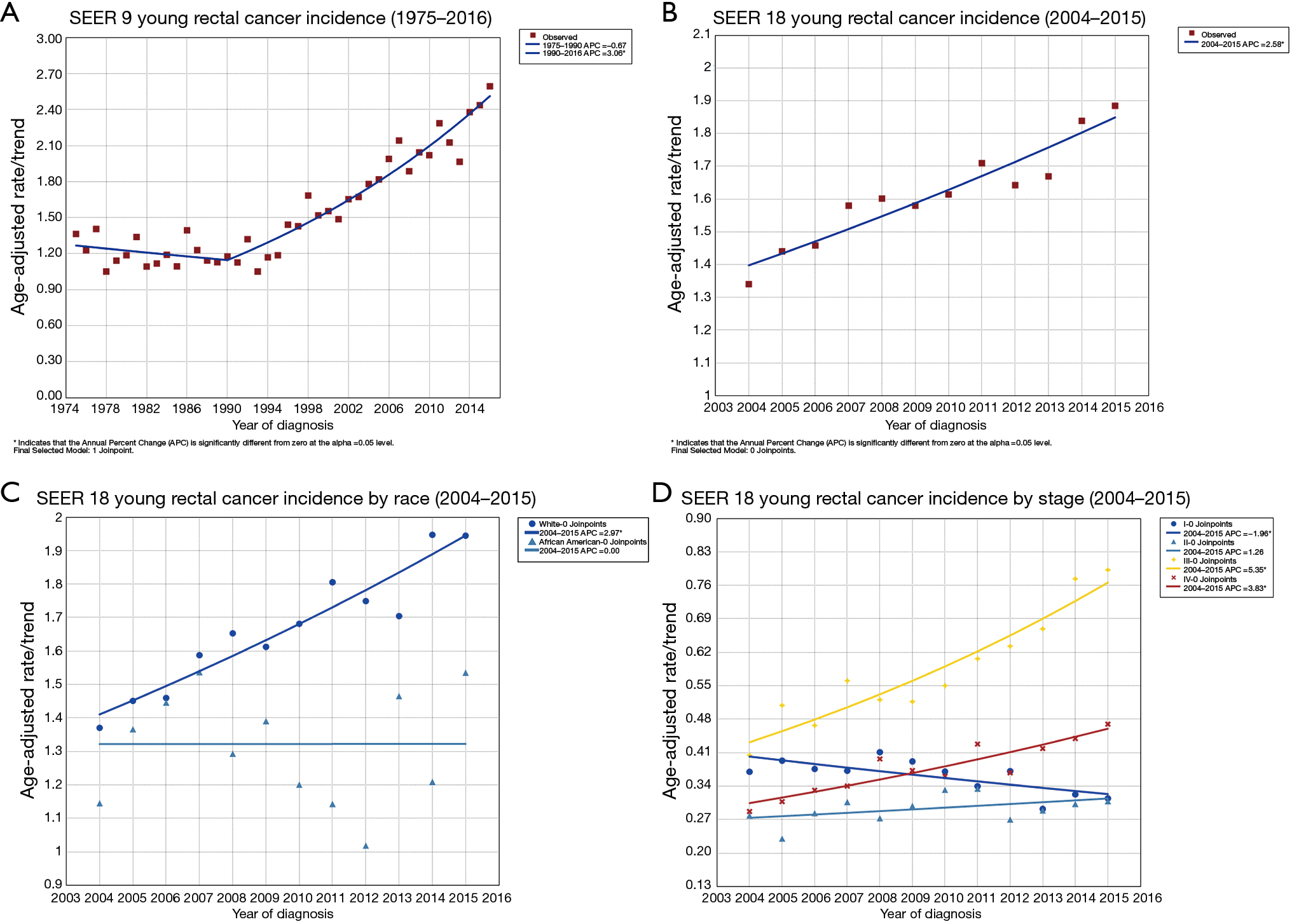 Figure S1 Age-adjusted annual percent change of incidence in young rectal cancer using the SEER 18 registry for white (A) and African American (B) patients, stratified by stage at diagnosis.

The baseline characteristics among young white and African American patients in the NCDB and SEER cohorts are depicted in Tables S2,S3, respectively. After PS matching and IPTW-adjustment, baseline factors were comparable between both databases. 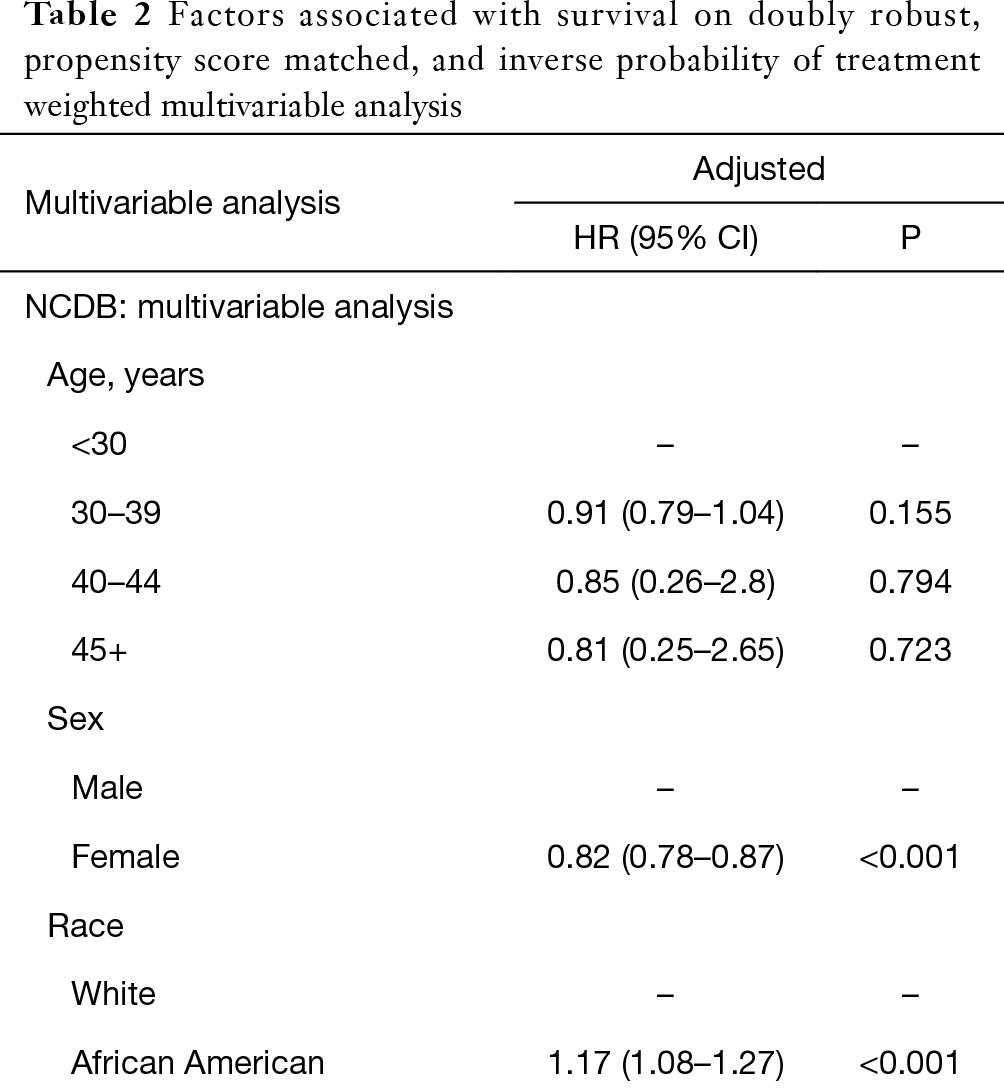 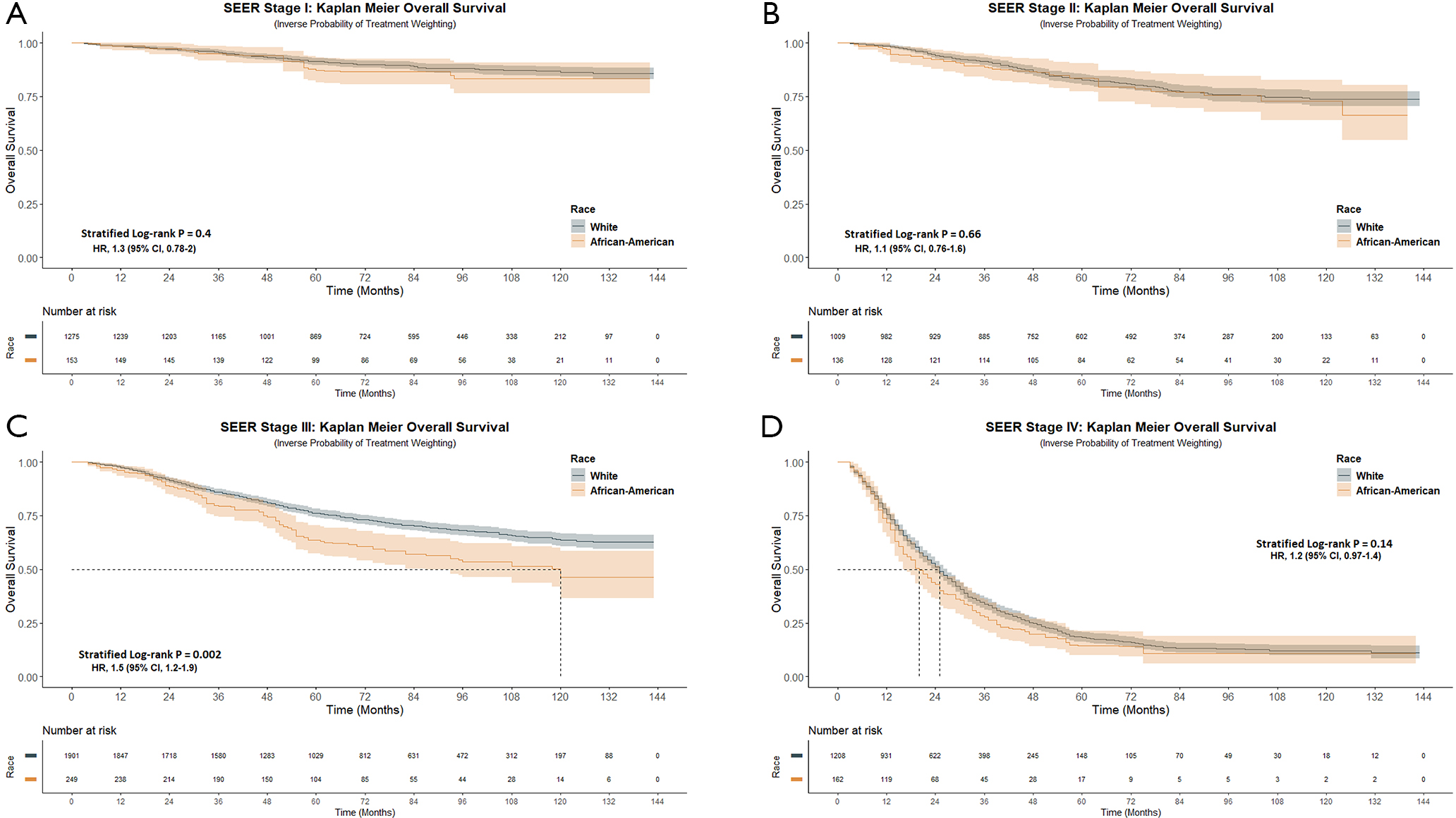 Figure S2 Cancer-specific survival for young rectal cancer patients in SEER 18, stratified by stage I (A), II (B), III (C), and IV (D) after propensity score matching with inverse probability of treatment weighting.

In addition to race and stage, there were a number of other patient and treatment characteristics that portended worse overall survival, many of which are possibly surrogates for overall socioeconomic status and performance status. Specifically, Medicare (which for the cohort analyzed would only be available to patients receiving social security disability insurance or who have end-stage renal disease or amyotrophic lateral sclerosis), CDCC index, and median income <$48,000 were all associated with worse OS, even on IPTW-adjusted MVA. Moreover, patients that did not receive surgery and those with close/positive CRM margins (0–1 mm) had worse outcomes.

Recently, Virostko et al. published an NCDB analysis of trends in age of CRC from 2004–2015 (24). They noted younger patients were more likely to have stage III/IV disease compared to older patients (52% vs. 40%). Notably, this study is unable to capture true epidemiologic metrics as the NCDB does not collect population data. Crosbie et al. evaluated SEER and New Jersey State Cancer Registry and identified an increase in rectal cancer incidence among young patients in both cohorts (25). While both of these studies provide important insight into the trends and incidence of CRC among young patients, neither evaluated outcome disparities.

African Americans are reported to have increased incidence of CRC and worse OS compared to whites (26). Indeed, Rahman et al. reported on increased CRC incidence among young minorities and worse OS among African Americans compared to whites (5-year OS 56% vs. 66%, P<0.0001) (27). However, this study reported on raw survival outcomes and provided point-estimates at 1- and 5-year. Holowatyj published a SEER analysis comparing racial/ethnic survival disparities among young patients with CRC (28). They also identified an improvement in both OS and CSS among young white compared to African American patients. In contrast, Kolarich et al. analyzed the NCDB (2004 to 2014) and noted that African American young rectal cancer patients had worse OS on univariate analysis, but not on multivariable analysis (HR 1.1, 95% CI: 0.8–1.5) (29). Nevertheless, covariate adjustment via Cox proportional hazards modeling yields HRs that are estimates of a conditional effect, and do not necessarily reflect marginal effects at the population level (30).

In contrast to the above SEER and NCDB analyses, the strength of the current study is the combined analysis of both databases and the ability to estimate marginal HR via propensity score matching and inverse probability of treatment weighting. Importantly, the incidence trends in the SEER 9 and SEER 18 registries were validated in the non-population based NCDB cohort. Furthermore, after adjusting for confounding factors, all baseline characteristics were similar among both cohorts, thus allowing for adjusted univariate and doubly robust multivariable analyses to further understand the impact of race on OS and CSS. These robust statistical analyses identified young African American patients to have worse OS (doubly robust HR 1.4, 95% CI: 1.2–-1.6, P<0.001) compared to young white patients. These findings were further validated using the NCDB database, in which the doubly robust HR was 1.2 (95% CI: 1.1–1.3), P<0.001. Another strength of the current study is a focused analysis on rectal cancer as these tumors have very different treatment approaches and outcomes.

There are multiple hypotheses that attempt to explain the underlying force responsible for the striking increase in rectal cancer incidence among young patients. Recently, Liu et al. reported on the association of obesity and early-onset CRC using The Nurses Health Study II. They found that for every 5-point increase in BMI, there was an associated 20% increase in CRC (31). Notably, obesity in the US has increased significantly from 1980 to 2000 and 2003 to 2004 (32). Indeed, a recent report of the National Health and Nutrition Examination Survey identified age-adjusted prevalence of obesity of 36.5% and 40.8% for men and women, respectively (33). Unfortunately, neither the NCDB or SEER databases record information on height, weight, or BMI. Metabolic syndrome and insulin resistance, both of which are highly correlated with obesity, also seem to be associated with an increase in CRC incidence (34). Likewise, poor nutrition (35) and a sedentary lifestyle (36) have also been associated with increased incidence of CRC. Recently, Willauer et al. showed that the molecular background of tumors are different in adults vs. young patients (37). Moreover, tumors were molecularly distinct among subsets of young adults.

SEER and NCDB data have a tremendous quality control mechanism. Nevertheless, the data are dependent on precise coding as well as reporting, and are at risk for reporting bias. Furthermore, despite attempts to control for confounding variables, there are likely multiple unmeasured and unknown confounders that cannot be adequately controlled for. For instance, family history of cancer, BMI, diet, genetics and comorbid medical conditions are not recorded and, therefore, cannot be used to adjust for confounding. As reported, age-adjusted obesity is more prevalent among African Americans compared to whites for all ages (48% vs. 37%), 20–39 years old (43% vs. 32%), 40–59 years old (54% vs. 41%), and 60+ years old (47% vs. 40%) (33). Nevertheless, this study is one of the largest studies to date, and to our knowledge, the only combined SEER/NCDB cohort analysis demonstrating consistent outcomes in both databases.

The current study adds to the growing body of literature demonstrating an alarming increase in incidence of rectal cancer among young patients. Moreover, the incidence appears to be increasing particularly among young white patients and driven by stage III disease. After controlling for confounding variables, we identified outcome disparities among young African American patients with stage III rectal cancer, compared to matched white patients. The etiology of this disparity remains to be characterized but may relate to observed trends in nutrition and obesity however other risk factors can play a role. Further research into the link between obesity and rectal cancer is greatly needed and may further inform a risk-adapted screening program.

Reporting Checklist: The authors present the study in accordance with the STROBE reporting checklist. Available at http://dx.doi.org/10.21037/jgo-20-197

Conflicts of Interest: Both authors have completed the ICMJE uniform disclosure form (available at http://dx.doi.org/10.21037/jgo-20-197). The authors have no conflicts of interest to declare.

Ethical Statement: The authors are accountable for all aspects of the work in ensuring that questions related to the accuracy or integrity of any part of the work are appropriately investigated and resolved. The study was conducted in accordance with the Declaration of Helsinki (as revised in 2013). The SEER/NCDB registries provide de-identified data. Consequently, this study does not require Institutional Review Board (IRB) review or approval.