Pancreatic cancer is the fourth leading cause of cancer mortality in the United States, with a 5-year survival rate of 8% (1). Complete surgical resection remains the only curative treatment for resectable tumors. However, only about 15–20% of tumors are considered candidates for surgical intervention at the time of diagnosis (2). Current recommendations by the National Comprehensive Cancer Network (NCCN) for resectable pancreatic cancer is to perform definitive surgery followed by adjuvant therapy (3).

The use of adjuvant therapy has been shown to be advantageous in its ability to improve overall survival (OS) and decrease tumor recurrence rates following surgical resection (4-8). However, adjuvant therapy has its associated disadvantages, largely attributed to patients who are unable to complete the planned therapy course due to treatment related co-morbidities and local and distant disease progression (9,10). This is an aggressive cancer associated with early micro-metastases. One study found that approximately 38% of patients who underwent complete pancreatic tumor resection had recurrent disease due to possible micro-metastases not identified preoperatively, leading to significantly shorter OS compared to patients without early recurrence (9.3 vs. 26.3 months) (11).

Though its effectiveness is still being debated, neoadjuvant therapy seeks to combat these shortcomings of the current standard of care. Neoadjuvant therapy has been shown to potentially improve resection rates through tumor down-staging, subsequently increasing the number of eligible candidates for curative surgery. Also due to post-operative complications and chemotherapy associated toxicities, the use of adjuvant therapy may be delayed or even prevented leading to consequential disease progression. The utilization of neoadjuvant therapy will allow more patients to receive all necessary multimodal treatments. Neoadjuvant therapy has also been shown to target occult micro-metastases that can significantly contribute to disease recurrence. Importantly this treatment sequence can also improve patient selection by excluding those that would not benefit from curative resection due to undetected metastatic disease or aggressive disease (9,10,12).

With multiple studies demonstrating improved survival rates with the emerging application of neoadjuvant therapy compared to adjuvant therapy, it becomes increasingly important to determine the ideal treatment sequence and modality (2,10,13,14). There is currently little data to support an optimal treatment regimen when utilizing neoadjuvant chemotherapy (NCT) agents (with or without radiation, ± RT). Our goal is to identify the impact of single agent (SAC) vs. multi-agent (MAC) chemotherapy ± RT on the survival of patients with resectable pancreatic cancer.

This retrospective study was approved and deemed exempt by the Sarasota Memorial Hospital institutional review board (16-ONC-03). The National Cancer Database (NCDB) is a database that collects patient data from >1,500 commission-accredited cancer programs centers in the United States. More than 70 percent of this data represents newly diagnosed cancer cases nationwide. We queried the NCDB for patients with a diagnosis of adenocarcinoma of the pancreatic head who underwent upfront surgery (UFS) as well as those who received NCT ± RT (NT + RT and NT − RT respectively) followed by surgery.

Baseline univariate comparisons of patient characteristics between the UFS, NT + RT, and NT − RT patients were made for continuous variables using both the Mann-Whitney U and Kruskal Wallis tests as appropriate. To compare categorical variables a Pearson’s Chi-square test was used when appropriate. OS was defined as the time of diagnosis to death or last contact. Survival time was censored for patients alive at the end of the study period. Survival outcomes were analyzed using Kaplan-Meier method which generated OS curves and estimated median survival with 95% confidence intervals for each group. The log-rank test was used to compare survival distributions across groups.

Propensity score matching (PSM) was used to correct for baseline differences among treatment groups to match for age, tumor size, and facility volume. Neoadjuvant therapy (N=2,686) served as the case group and UFS (N=23,877) the control group. Matching occurred on a 1:1 basis and only exact matches were allowed. All statistical tests were two-sided and α (type I) error <0.05 was considered statistically significant. Statistical analysis was performed using SPSS® version 24.0 (IBM®, Chicago, IL, USA). 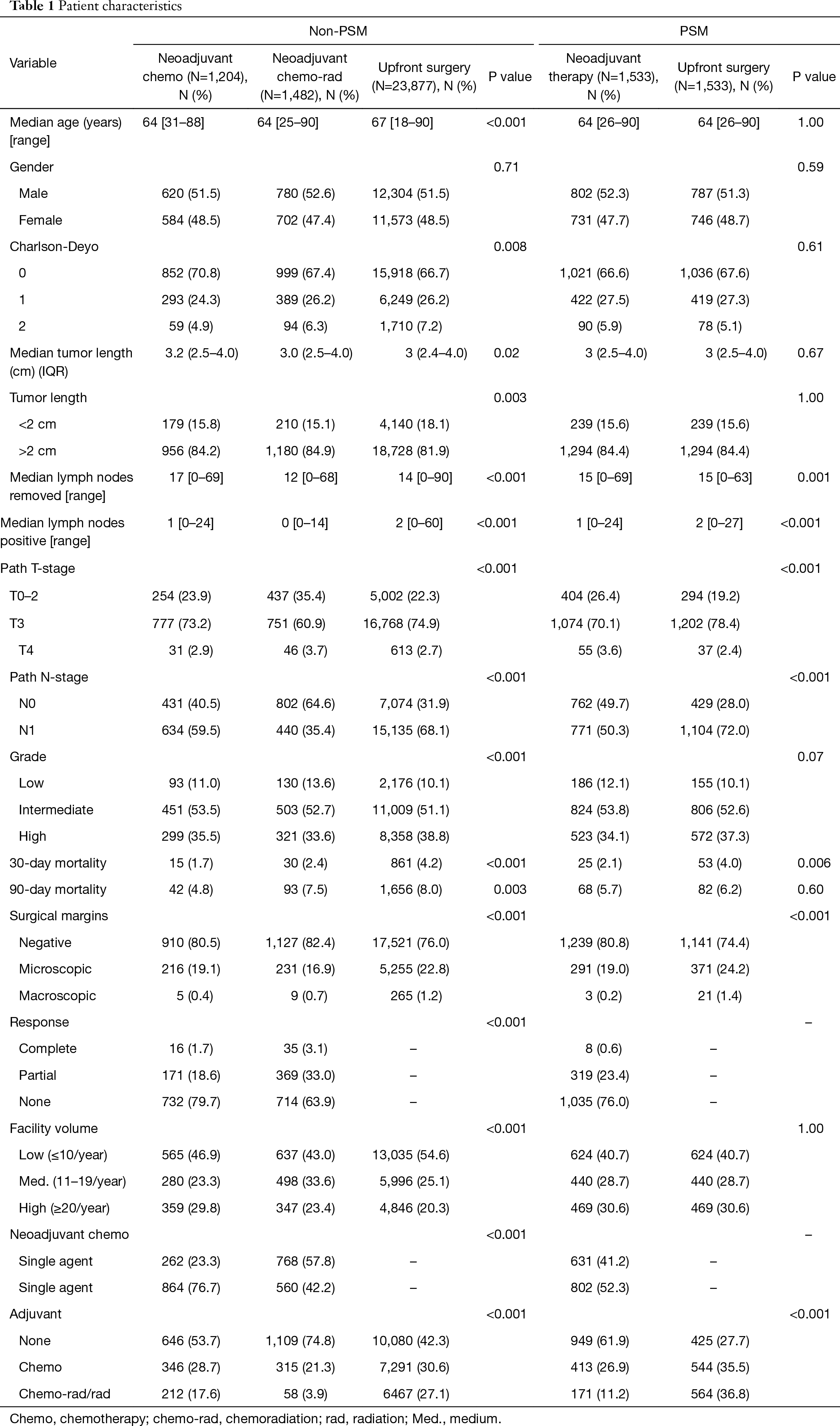 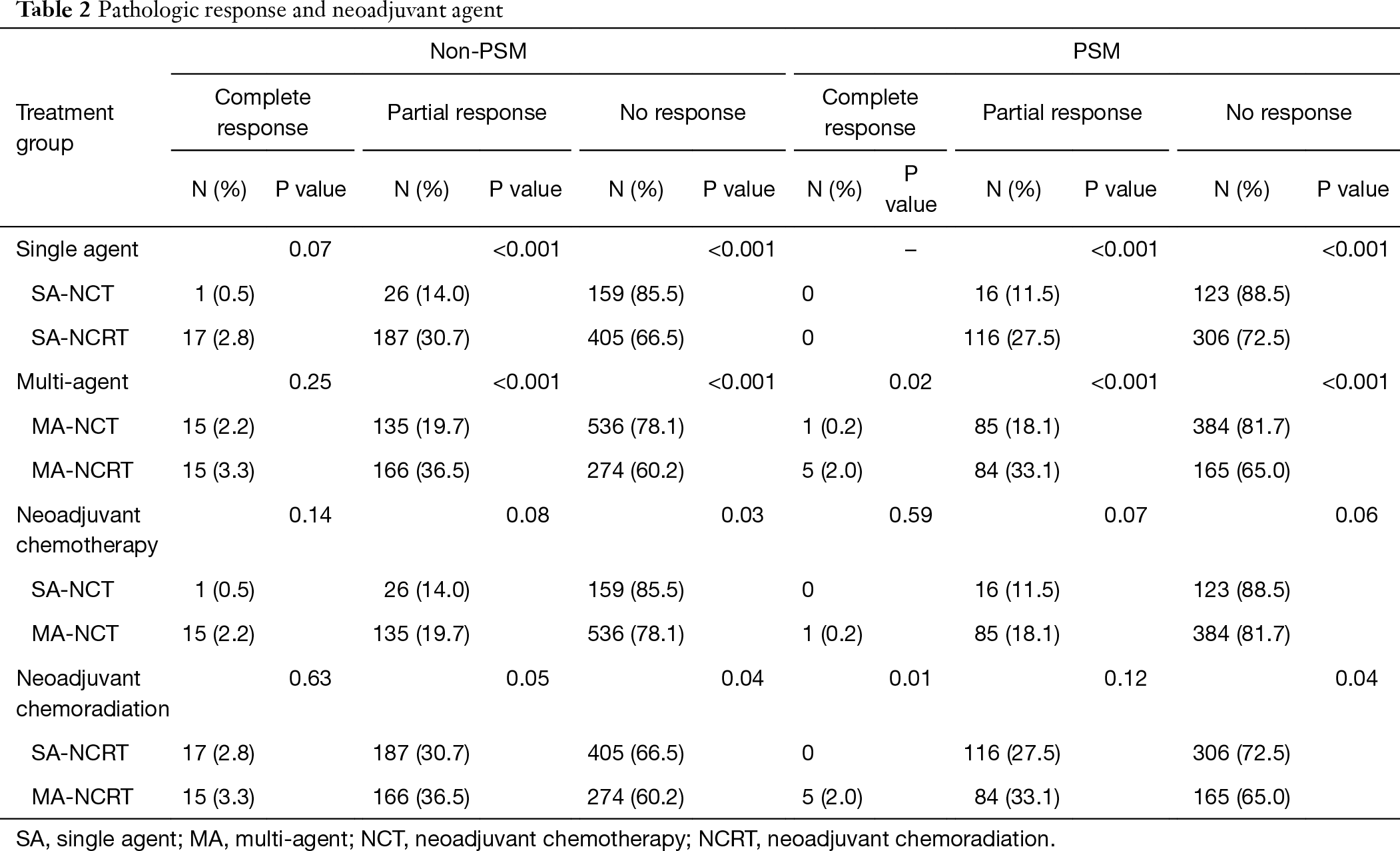 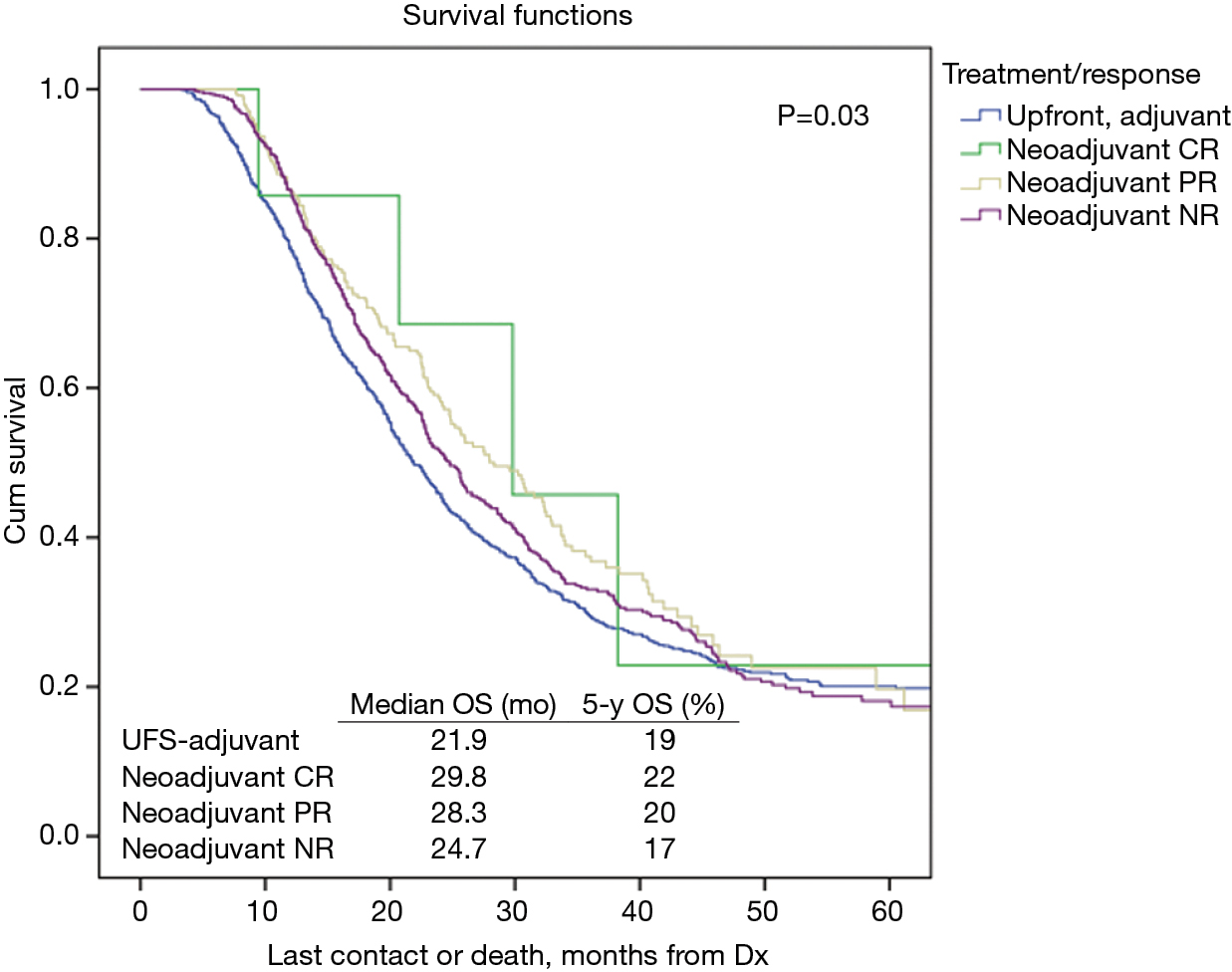 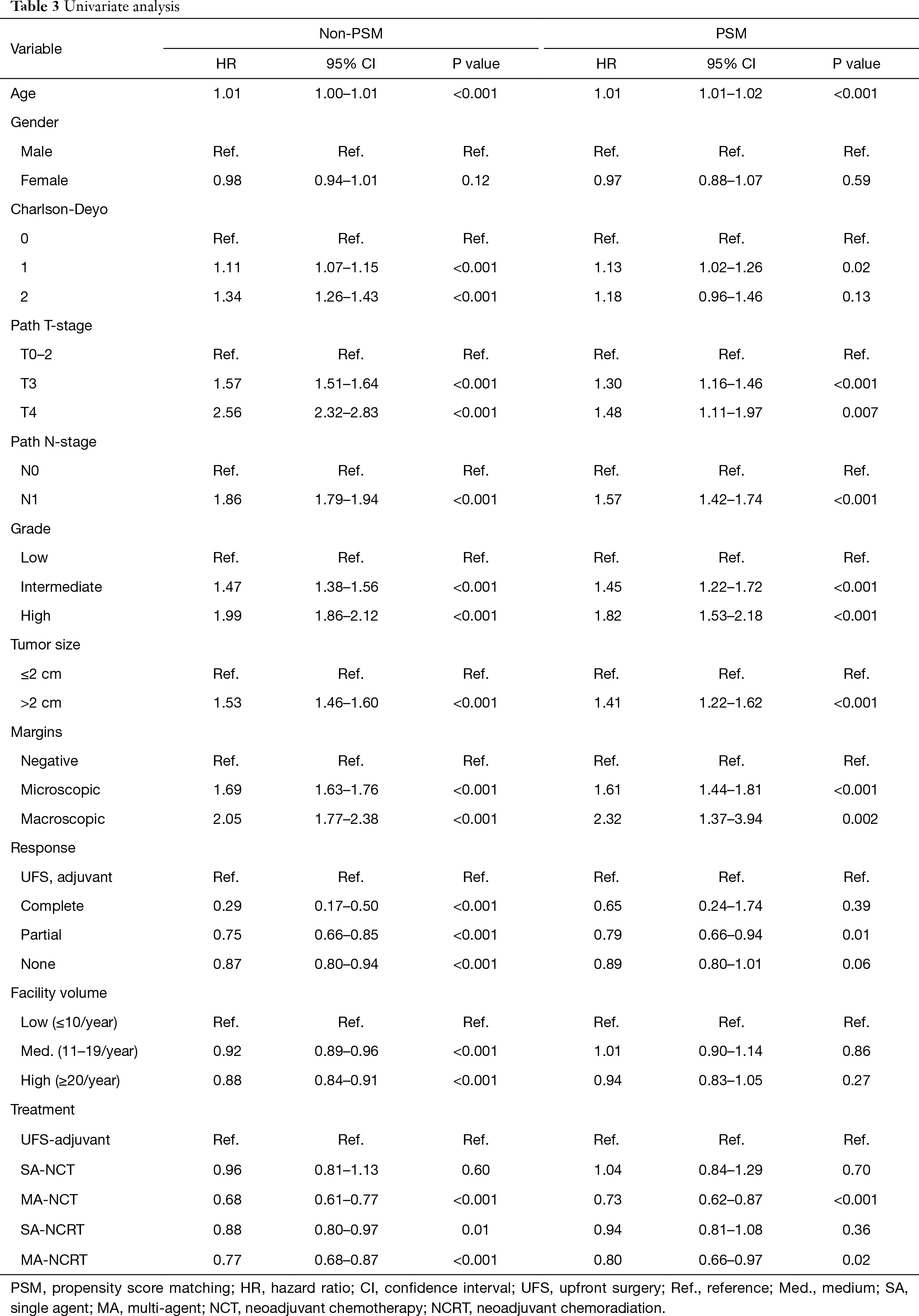 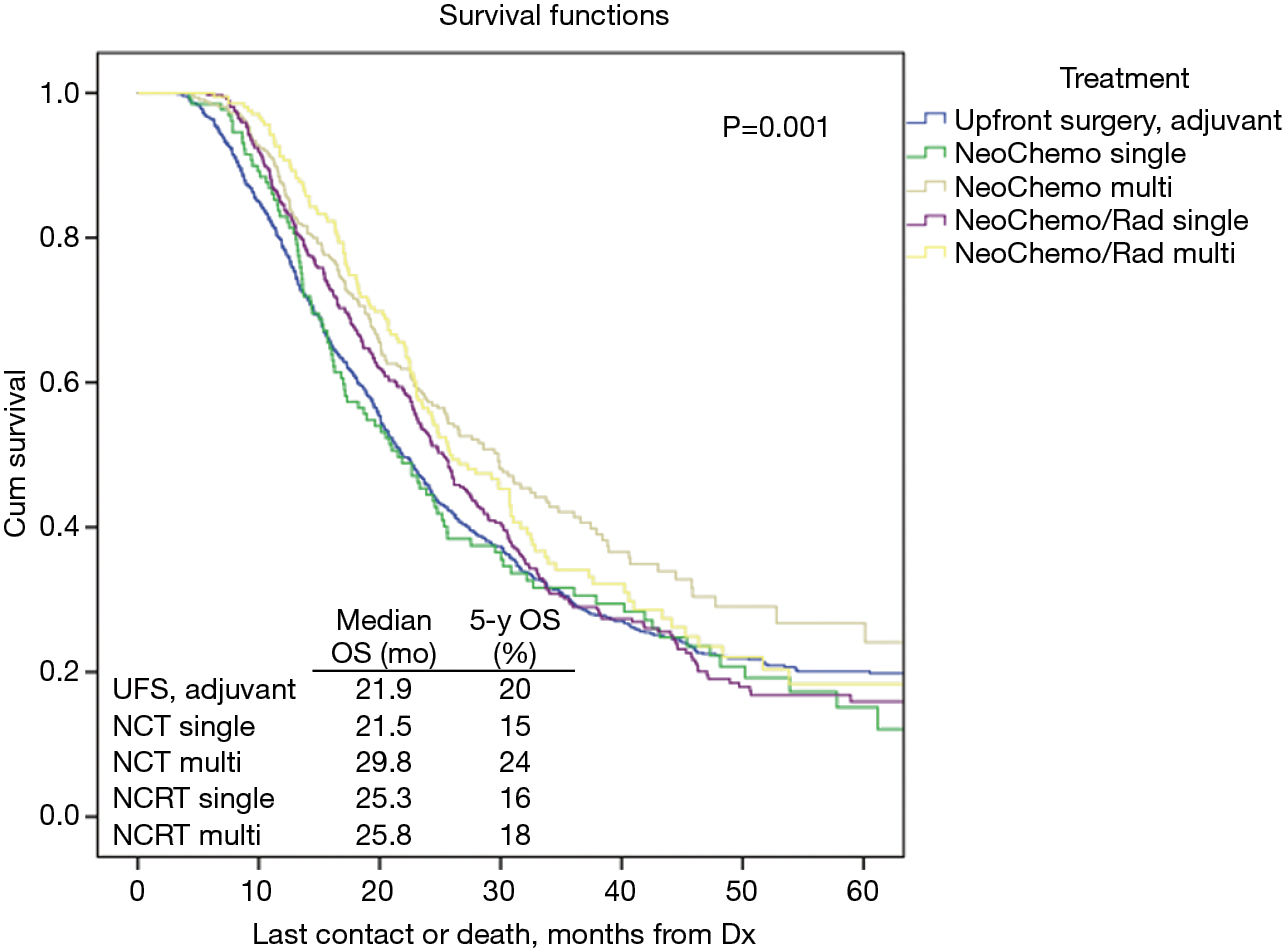 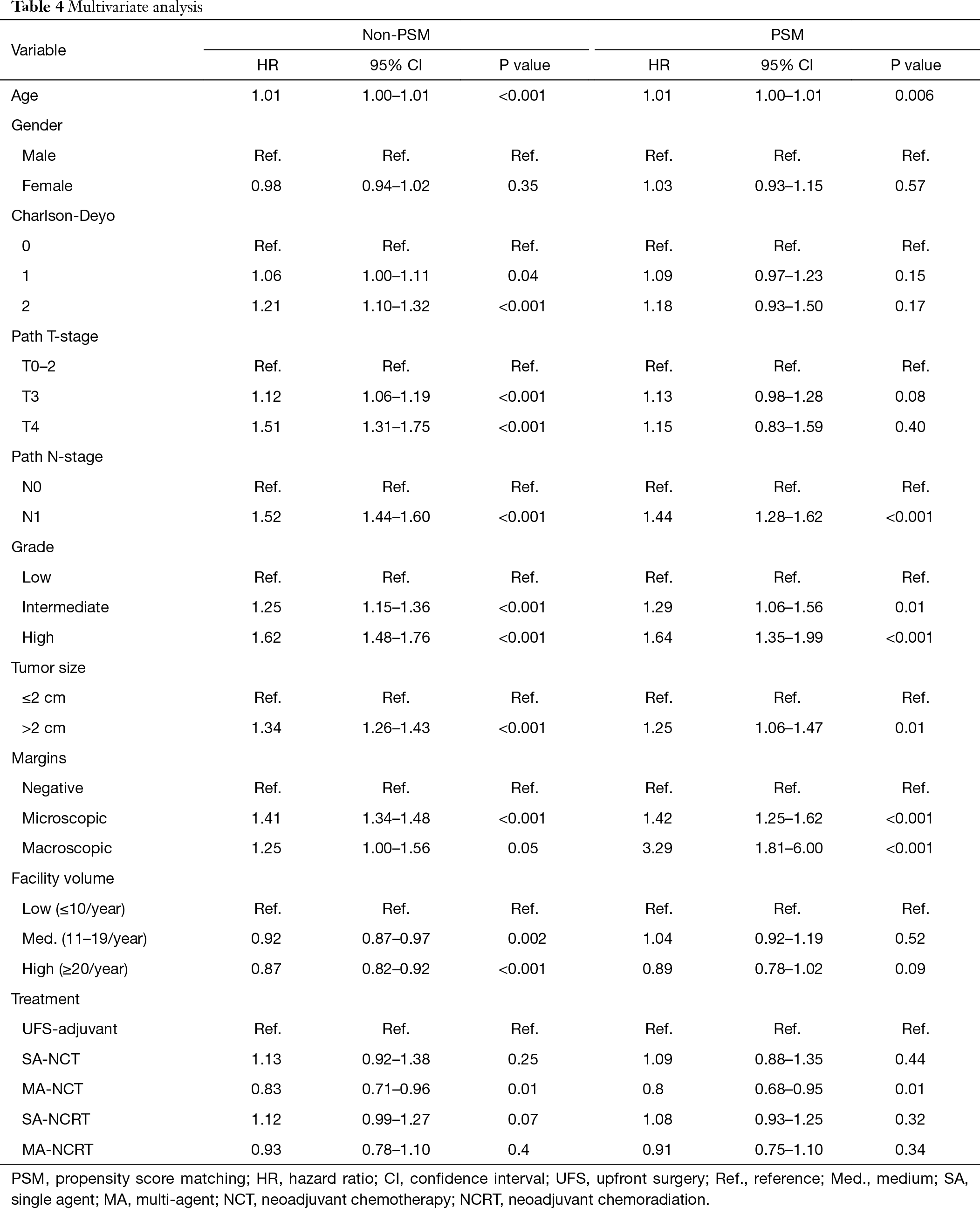 The current management recommendation for resectable and borderline resectable pancreatic cancer remains upfront surgical resection followed by adjuvant chemotherapy; radiation may be considered in patients with nodal disease and close or positive margins (3). Gemcitabine has been the standard adjuvant agent for over a decade. PRODIGE, a randomized phase III clinical trial that compared FOLFIRINOX (5-fluorouracil plus leucovorin, irinotecan and oxaliplatin) to gemcitabine in 493 patients with resectable tumors, found that adjuvant therapy with FOLFIRNOX demonstrated an improvement in median OS (54.4 vs. 34.8 months, P=0.003). However, FOLFIRNOX was associated higher rates of severe side effects (76% vs. 53%) (15). While this established treatment sequence has shown promising results, it fails a significant proportion of patients who are unable complete all of the necessary adjuvant treatment largely due to post-operative complications and chemo-related toxicities. In the aforementioned PRODIGE study, only 66% and 79% of patients received all cycles of adjuvant FOLFIRNOX and gemcitabine treatments, respectively (P=0.002). This has been corroborated by other authors who support surgical resection followed by adjuvant therapy, though significant selection bias is present due to the exclusion of patients who were not able to receive the entire adjuvant treatment course (up to 60% in some studies) due to complications (16-19).

Though neoadjuvant therapy remains controversial, it has several theoretical benefits to address the obstacles seen in a surgical resection and adjuvant therapy approach. PREOPANC-1, an ongoing randomized phase III clinical trial with 246 patients, compared preoperative chemoradiation therapy to immediate surgery and has demonstrated that preoperative interventions improved median OS (17.1 vs. 13.7 months, P=0.74), delayed disease recurrence (9.9 vs. 7.9 months, P=0.023), and had higher two-year survival rates (42% vs. 30%). In patients whose tumor was completely removed, the median OS was significantly higher in the pre-operative chemoradiation group (42.1 vs. 16.2 months) (20). Our data revealed that all four neoadjuvant modalities that we examined (SAC ± RT and MAC ± RT) demonstrated an improved median OS rate versus upfront surgical resection followed by adjuvant therapy.

Another potential benefit of a neoadjuvant approach is the possibility of downsizing tumors that are considered borderline resectable. A neoadjuvant approach potentially increases the rates of resectability. This remains important given the fact that a limited proportion of patients are considered to have a resectable tumor at the time of diagnosis and surgical resection remains the only curative measure (2). Lim et al. included five prospective neoadjuvant trials that contained borderline resectable pancreatic tumors and found that the surgical resection rates of these tumors ranged from 33–64% with R0 sections ranging between 87–100% (23-28). Though the sample size of these studies were small (ranging from 15–40 patients each), it demonstrates the potential for secondary resectability and achievement of R0 resection in a greater number of patients.

Negative margins and negative nodal involvement are established predictors of improved survival in patients with pancreatic cancer who underwent curative resection (29-34). Our study demonstrated higher R0 resection rates in patients who received neoadjuvant therapy compared to those who underwent UFS (MAC 82.4%, SAC 80.5%, and surgery 76%). We also demonstrated less N1 disease and fewer positive lymph nodes compared to UFS. The presence of micro-metastasis can contribute to locoregional recurrence or distant metastasis leading to poor OS after resection (11). Recognizing this indicates that pancreatic cancer is, in many cases, a systemic disease and therefore necessitates a systemic approach. A potential benefit from a neoadjuvant approach is to allow micro-metastatic disease to declare itself during the course of therapy thereby preventing patients from underdoing a morbid operative without curative benefit.

The optimal neoadjuvant therapy course remains poorly defined. When comparing SA vs. multi-agent treatment modalities, we found that MAC with and without radiation had a superior survival benefit. MAC without radiation was also found have the greatest improvement on median survival and 5-year survival across all treatment groups. In a randomized phase III study with 342 patients, Conroy et al. compared FOLFIRINOX to gemcitabine alone in patients with metastatic pancreatic cancer and found that the MAC group had significantly improved median OS vs. monotherapy (11.1 vs. 6.8 months, P<0.001) (35). Similarly, in a larger randomized phase III study with 861 patients, Von Hoff et al. concluded increased median OS with nab-paclitaxel plus gemcitabine compared to gemcitabine alone (8.5 vs. 6.7 months, P<0.001) (36). We also found significant survival benefit in patients when MAC neoadjuvant approach was adopted.

Our study is clearly limited due to the nature of a retrospective analysis. We attempted to limit the selection bias by including PSM. Our study is also limited in the ability to standardize data input across institutions and monitoring the guidelines used for data collection in the NCDB. Additionally, while we recognized that MAC prolonged median OS, our data does not include which specific chemotherapy regimens were utilized in treatment of our patient population as this data is not included in the NCDB.

With the relatively low survival rate, even in patients who undergo curative surgical resection, it becomes important to determine the ideal timing and modality of chemotherapeutic and radiation treatment regimens for patients with resectable pancreatic cancer. Adjuvant therapy significantly improved survival for those who complete all of the therapy at the recommended doses. However, those who cannot complete adjuvant therapy due to toxicities or post-operative complications have significant hindrance in their survival. Neoadjuvant therapy potentially addresses these shortcomings. This data supports the use of neoadjuvant MAC without radiation to provide the greatest improvement in the median OS of patients with resectable pancreatic tumors. Ongoing clinical trials will further corroborate our findings and clarify the management of pancreatic cancer.

Ethical Statement: The authors are accountable for all aspects of the work in ensuring that questions related to the accuracy or integrity of any part of the work are appropriately investigated and resolved. This study was reviewed by the Sarasota Memorial Hospital Institutional Review Board (16-ONC-03) and determined exempt because it does not meet the definition of human subject research.