Midgut neuroendocrine tumors (NETs) are relatively uncommon oncologic entities, as they represent less than 2% of all gastrointestinal malignancies (1). Due to the indolent nature of the disease there is a significant discrepancy between the reported incidence and prevalence of NETs. However, according to data from the National Cancer Institute’s surveillance, epidemiology, and end results (SEER) program, the incidence of these rare tumors has increased 6.4-fold from 1973 to 2012 (2). This increase in incidence may be attributed to improved diagnostic tools and measures resulting in greater detection of early stage disease, along with an increase in awareness of the disease among patients and health care providers. Despite the growing number of patients obtaining the correct diagnosis, advancements in therapeutics for NETs have been modest at best. As a tertiary referral center which specializes in the multidisciplinary care of NETs, our electronic research database has over 2,000 NET patient records, with about 78% of patients presenting with stage IV disease. In fact, most of our patients with stage IV midgut NETs had a combined boggy mesenteric lymphadenopathy and hepatic metastasis (Figure 1). 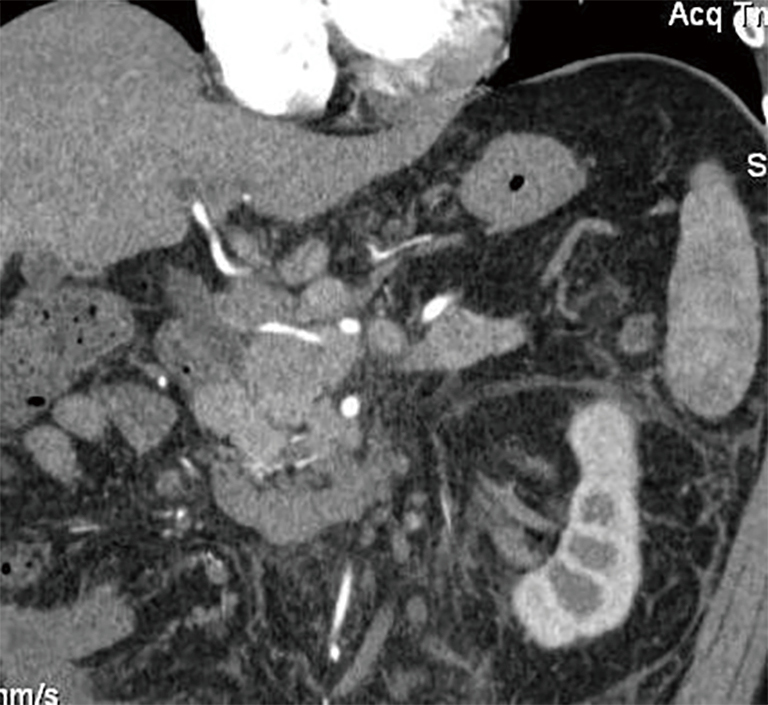 Midgut NETs primarily are indolent in nature with a slow progression of disease and often a low Ki-67 proliferative index. Due to the slow growth rate of the tumor in conjunction with vague clinical presentations, patients are often diagnosed late in their disease course. Previously, we showed improved survival and local disease control with aggressive tumor debulking, even in patients with stage IV disease (3). However, despite thorough dissection of the tumor bed, the chances of residual micro-metastatic disease remain a legitimate concern (Figures 2,3). 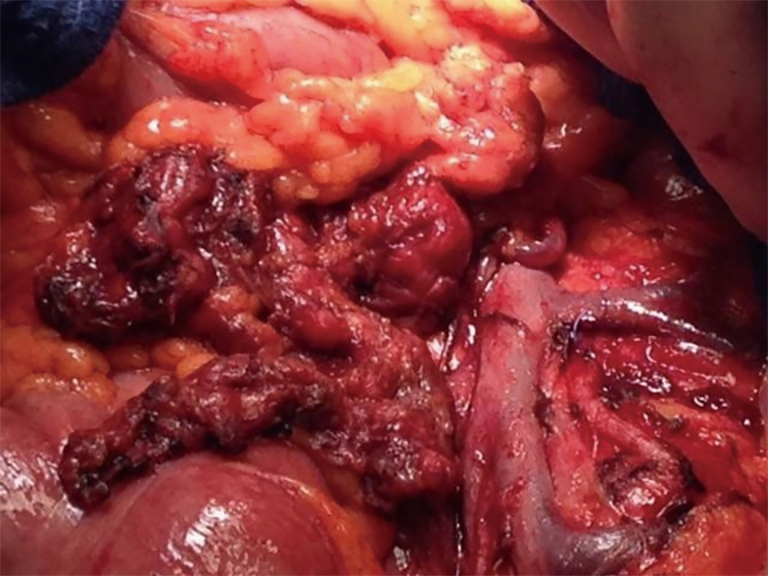 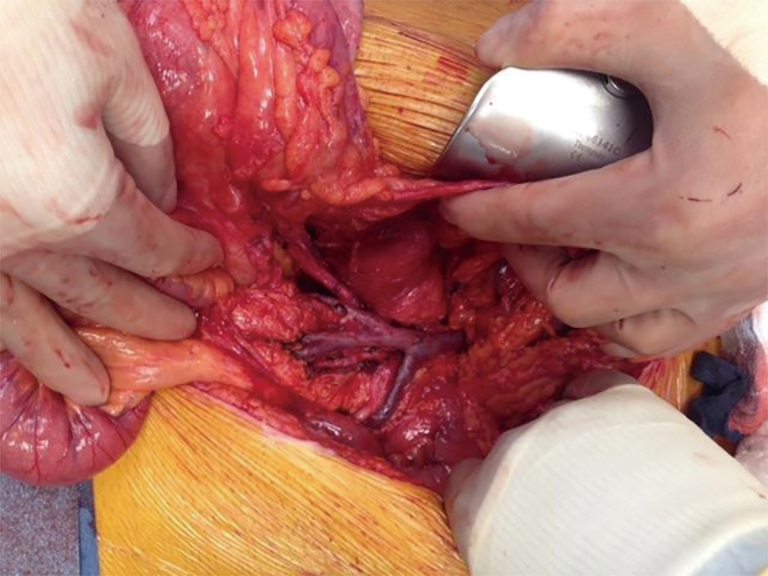 To address the possibility of residual disease, we innovated a technique in which adjuvant intraoperative chemotherapy is used to minimize residual post-dissection micro-metastatic disease (4). Lyons et al. found that 5-fluorouracil (5-FU) was the most effective drug when applied to midgut NET samples directly in vitro compared to twenty-three other agents (5). These results served as the basic rationale for the selection of 5-FU as the chemotherapeutic agent of choice. In a pilot study, we analyzed a cohort of 62 midgut NET patients and found that the application of 5-FU into the tumor resection bed intraoperatively resulted in a reduction of local/regional tumor recurrence in the resection bed (4). This promising outcome encouraged us to conduct a more robust and longer-term data analysis to evaluate the survival benefit of this novel technique.

All patients included in the study were evaluated by at least two team physicians as having advanced midgut NETs and were deemed to be good surgical candidates. All underwent open laparotomy for a maximum cytoreduction of tumor. With the aid of lymphatic mapping, resection margins were carefully defined (6). After removal of the primary tumor and mesenteric lymph nodes (Figures 2,3), the mesenteric defect was then closed layer by layer. A total of 100 mg of 5-FU was mixed with 100 cc of normal saline. Sheets of Gelfoam (Gelfoam®; Pfizer, New York, NY, USA) were soaked in this solution for 5 to 10 minutes. The strips of 5-FU soaked Gelfoam were placed into the tumor resection bed and mesenteric defects after extensive debulking of the tumor. The Gelfoam was secured in place with suture closure of mesenteric (and/or liver resection) defects (Figure 4). 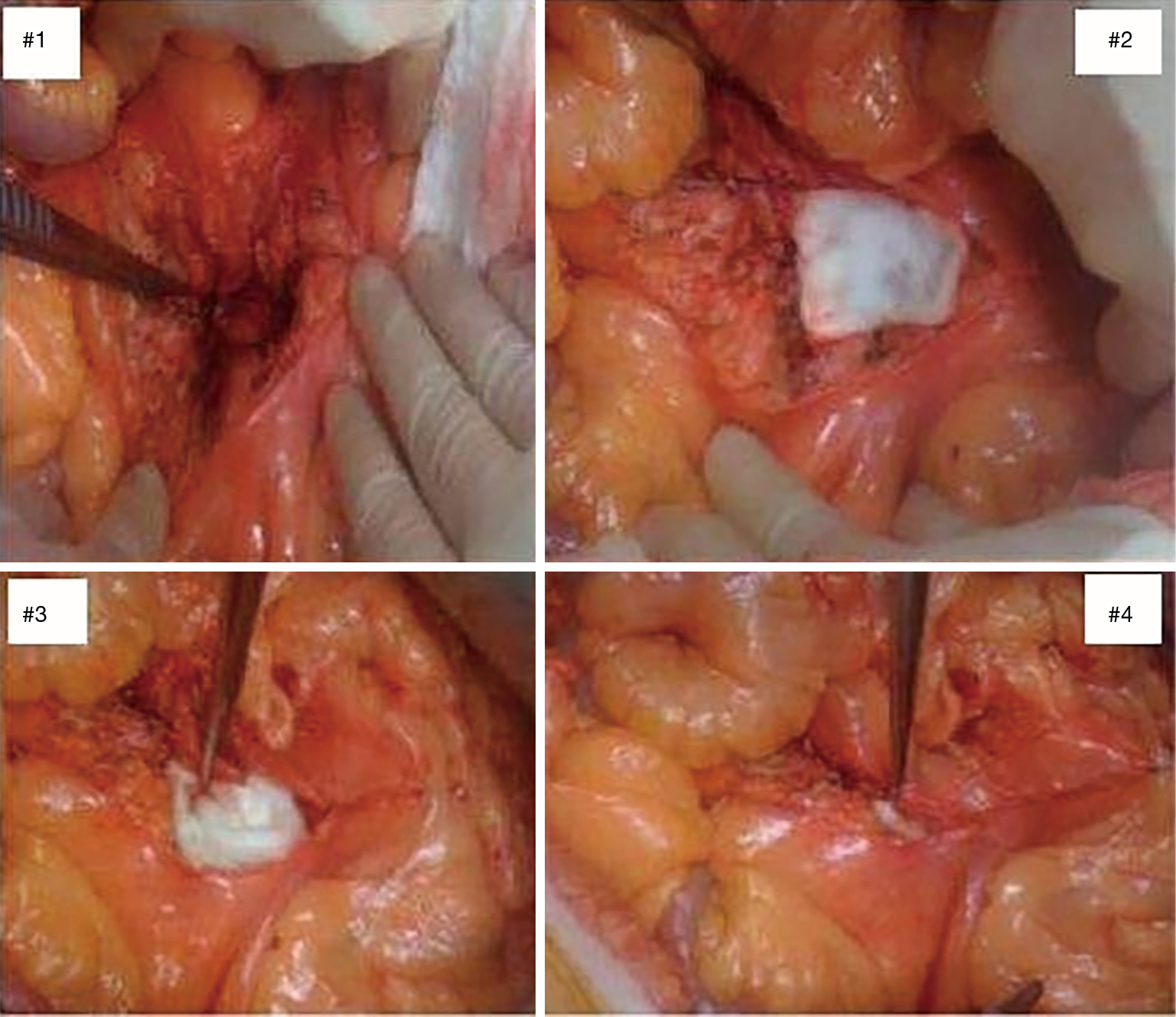 After obtaining institutional review board (IRB) approval, surgical records of NET patients at our institution from 2003 to 2012 were reviewed and we found 189 patients who underwent extensive cytoreductive surgeries for stage IV, small bowel NETs with boggy mesenteric lymphadenopathy. At the surgeon’s discretion, eighty-six patients who had Gelfoam strips saturated with 5-FU secured into their mesenteric resection defect served as the study group (86/189, 46%), and one hundred three matched patients who did not receive such intraoperative chemotherapy after mesenteric resection served as the control group (103/189, 54%).

Kaplan-Meier survival analysis was performed using the time of diagnosis to the time of patient death and post-operative complications between the two groups were compared. For all univariate Kaplan-Meier survival analyses, statistical significance was determined using a Log-rank test. A P value <0.05 was considered statistically significant. Statistical analyses were performed using MedCalc for Windows, Version 15.6.1 (Medcalc Software, Ostend, Belgium). Clavien-Dindo grading was used to assess post-operative morbidity and mortality (7). Grade I and II were considered minor complications and grade III and IV were grouped under major complications. Grade V was death.

There was no selection bias between the control and treatment cohorts. Patient demographics for both the control and treated group are similar and well matched as shown in Table 1. A total of 58% (109/189) of our study population were females. There were 176 (93%) Caucasians, 12 (6%) African-Americans, and 1 (1%) other. The mean age [± standard deviation (SD)] at diagnosis was 55±11 years. 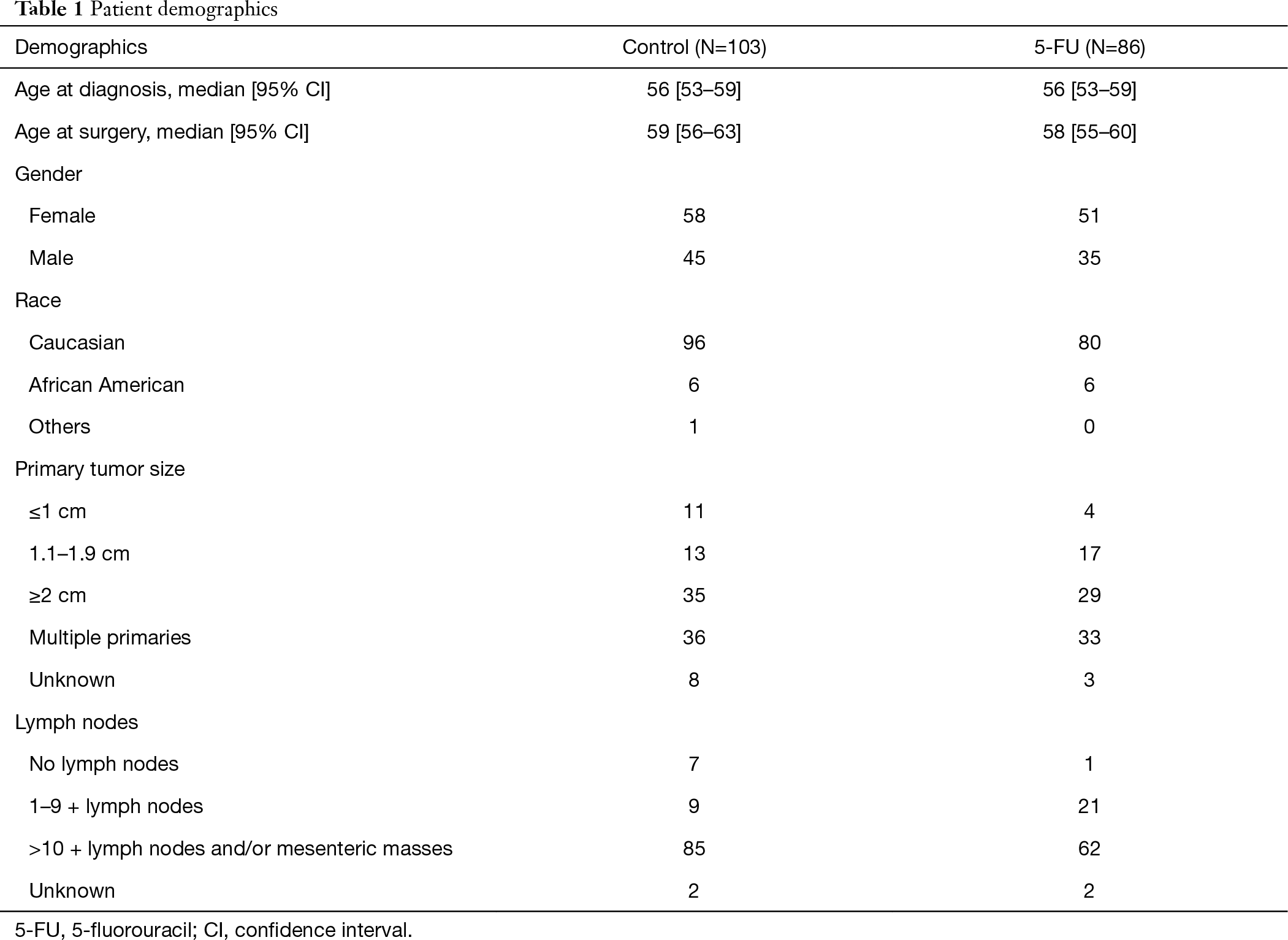 All patients in our clinic get the same follow-up surveillance based on our protocol with tumor markers every 3 months and imaging scan every 6 months. As the way we set it up, there is no difference in follow-up between the groups. The mean follow-up time (± SD) from the date of diagnosis was 56±50 months. Minor complications (Clavien-Dindo grade I and II) at 30, 60 and 90 days post-operatively were 12, 0, 0 for the study group and 9, 3, 3 for the control group. Major complications (grade III and IV) at the same time intervals were 0, 0, 1 for the study group in contrast to 2, 3, 2 for the control group (see Table 2). 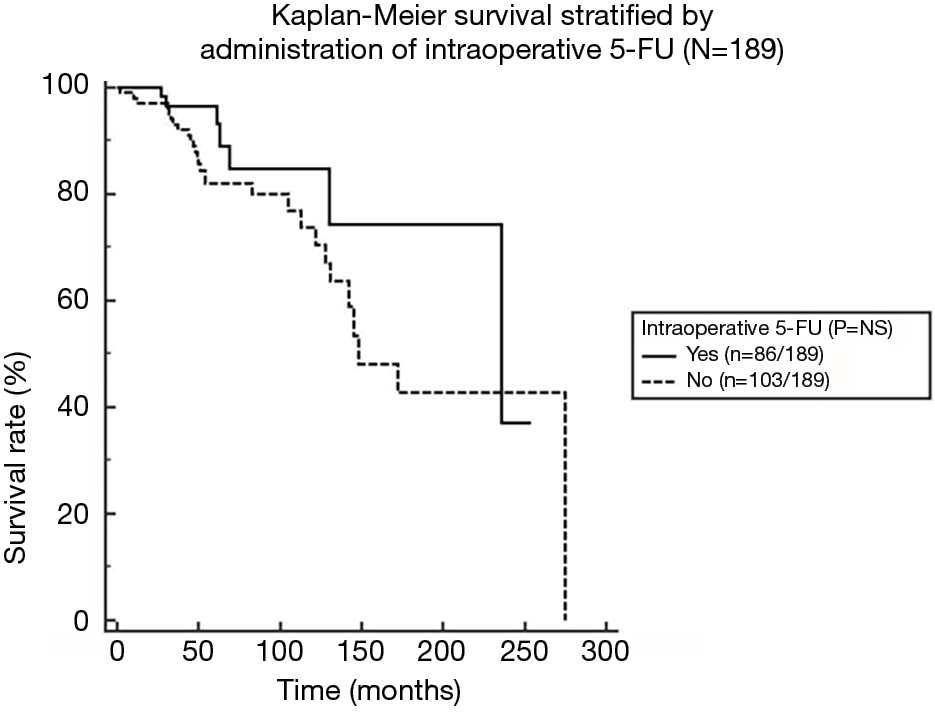 Midgut NETs are uncommon neoplasms, comprising less than 2% of all gastrointestinal malignancies (1). Due to the indolent natural history of NET disease progression and the fact that clinical presentations tend to be vague, patients are diagnosed typically at advanced disease stages. It is common to find patients with mid-gut NETs having extensive boggy mesenteric lymphadenopathy and/or liver metastasis at the time of diagnosis (6). Due to the poorly understood natural history of midgut NETs in combination with the misconception of dealing with a “benign” or indolent rare malignancy, the “wait and observe” approach has been a generally accepted practice (8,9). As a consequence, many patients present with advanced disease making the tumor unresectable.

Boggy massive and extensive mesenteric lymph node metastasis from midgut NETs can be debilitating for patients and a daunting task to resect for the treating surgeons. The lymphadenopathy-related encasement of the mesenteric vessels can prevent NET patients from obtaining sufficient nutrition due to the postprandial pain, malabsorption, bloating or diarrhea secondary to intestinal angina or bowel ischemia. Left untreated, strangulation with bowel perforation or necrosis can ensue which can lead to death.

A few promising therapies have been developed in recent years for treatment of metastatic disease in NET patients. Even with these therapies, the only durable option in treating the primary tumor and advanced regional lymphadenopathy is still surgical resection and debulking of the tumor. In a single institutional analysis of 154 NET patients, the conclusion was that surgical intervention, primarily tumor debulking, played the most important role in curative treatment and should be considered even when a cure is unlikely (10). Similarly, Ohrvall et al. (11) recommended dissection of mesenteric carcinoid tumors after reporting marked symptom improvement in 56 patients who underwent mesenteric debulking procedures, even in those deemed inoperable previously (11). Another study found an increase in survival and a reduction in tumor-related symptoms after successful debulking of the primary tumor and excision of mesenteric lymph nodes (12).

However, debulking and resection of mesenteric lymph nodes is an extremely difficult and potentially dangerous procedure. Unwanted consequences of this surgery can be massive bleeding, vascular thrombosis, and worsening bowel ischemia due to disruption of the well-established collateral circulation. However, even with the most successful cytoreduction by applying a careful, extensive and delicate dissection, micro or macro residual disease remains a distinct possibility (Figures 2,3). Conceivably, these micro-metastatic residual foci could lead to local recurrence or serve as a nidus for further distant spread of the disease.

Well-differentiated tumors are in general poor candidates for systemic chemotherapy due to the paucity of duplicating cells within the tumors that can be targeted by chemotherapy agents. Yet, we showed that 69% of NET cells are sensitive to 5-FU when directly placed into culture media of cancer cells in vitro (5). The results of this study indicate that local delivery of 5-FU into the tumor resection bed might have tumoricidal or tumoristatic activity. Therefore, in our pilot study, patients who received chemotherapy in the tumor bed at completion of an extensive mesenteric resection or debulking demonstrated a reduction of local recurrence, decreasing from 30% to 6.25% compared to controls (4). We think that chemotherapy placed in the local resection bed aids in suppressing the growth of residual disease, thus delaying or preventing local recurrence.

Placing chemotherapy directly in the tumor resection bed provided a much higher dose of chemotherapy (60–100 mg of 5-FU) in a very small area within the surgical defect/cavities. In contrast, systemic therapy utilizes a dose of 5-FU ranging from 200–600 mg/sq meter with the highest dose not to exceed 800 mg/sq meter. We chose Gelfoam as the media to carry the 5-FU simply because it is an extremely porous contact hemostatic agent that is reabsorbed within 6 weeks of placement without any discernible residual side effects. Thus, the use of Gelfoam can achieve a slow, sustained release of a chemotherapeutic agent into the post-resection tumor bed. In addition, both Gelfoam and 5-FU have hemostatic capabilities (13,14) and when used in combination they enhance hemostasis within the tumor resection bed (13).

In assessing any novel chemotherapy protocol, the beneficial treatment outcomes must outweigh the toxicity/side effects profile of the agent and approach. In our initial study, we clearly showed the beneficial effects of this simple, inexpensive, and effective intra-operative maneuver to reduce local/regional recurrence. In this follow-up study with a larger patient cohort, we showed not only a survival advantage, but a comparable or decreased number of side effects in the treated compared to control group. The results of the present study support the fact that local application of a chemotherapeutic agent onto post-resection tumor bed is both effective and safe (4).

We attribute the therapeutic effect of 5-FU on this well-differentiated neoplasm, known to have extremely low mitotic activity, to the fact that the traumatic insult from surgery to the residual tumor cells and subsequent healing/repairing process activates residual cancer cells into biologically active cells which become chemo-responsive. We further credit the low toxicity profile of this treatment to the fact that the extensive surgical dissection made tumor resection bed relatively ischemic thus preventing this local chemotherapy from leaching into systemic circulation to create any notable systemic side effects. These two hypotheses will need further clinical and laboratory studies to confirm.

This study’s impact is limited since it was a single institutional study which was not randomized. Also, despite a median follow-up of nearly five years, long-term outcomes are difficult to determine due to the slow-growing nature of this malignancy. Although not statistically significant, the advantage of 88 months (7.3 years) in overall median survival seen in patients who received intraoperative 5-FU, supports our hypothesis that local application of chemotherapeutic agents after tumor resection can minimize residual disease and perhaps enhance overall survival.

Intraoperative tumor resection bed chemotherapy is a safe adjuvant without discernible toxicity. This approach may provide substantial survival benefits to patients with midgut NET and extensive mesenteric lymphadenopathy who undergo extensive cytoreductive surgery. The trend for potentially increasing overall survival with a simple addition to the routine surgery is very encouraging and warrants further investigation. A prospective randomized study will help to further confirm our hypothesis and validate safety and efficacy of intraoperative chemotherapy.

Ethical Statement: The authors are accountable for all aspects of the work in ensuring that questions related to the accuracy or integrity of any part of the work are appropriately investigated and resolved. This study was approved by the institutional review board (IRB) approval (No. LSUHSC IRB #7723 “Utilization of Online Carcinoid Database to Enhance Clinic Performance”).