Genetic alterations through a multistep process have an essential part in the development of CRC. Therefore, characterizing the genetic origin of the cancer pathway is an ongoing exploration necessary in the development of a standardized treatment guideline based on molecular studies (2).

Early diagnosis of CRC, identification of standard prognostic factors, and proper management with multimodality treatments (surgery, chemotherapy, and targeted therapy +/− radiotherapy) have contributed to the improved outcomes in these patients.

Although the TNM (tumor-node-metastasis) classification is useful for staging cancers and facilitating treatment decisions, it is not sufficient because some patients with the same disease stage may have different disease behaviors and outcomes. Hence, other prognostic factors, based on either clinical factors (obstruction or perforation) or laboratory tests (tumor grade, venous invasion, perineural invasion, 18q deletion), have to be considered to select the optimal therapy for patients with CRC. In the era of molecular-based interventions, more effort is needed to understand the underlying causes of different disease behaviors in patients with CRC, especially those with metastatic CRC (mCRC).

In 1975, Arrington et al. (3) recognized HRAS and KRAS as the first 2 RAS genes from the revisions of 2 viruses initiating malignancy (Harvey sarcoma virus and Kirsten sarcoma virus). The human isoform was then identified in 1982, leading to the establishment of the three recognized subtypes: NRAS, HRAS, and KRAS. In all human cancers, KRAS mutations had the highest incidence (21.6%), whereas NRAS and HRAS mutations had a much lower incidence at 8.0% and 3.3%, respectively (4).

RAS gene mutations have been identified in different malignancies, such as pancreatic cancer (90%), thyroid cancer (55%), lung cancer (35%), and rhabdomyosarcoma (35%). The KRAS mutant type has been recognized in 30–50% of CRC cases, and it is associated with aggressive behavior, rapid disease progression, and poor survival.

Polymerase chain reaction (PCR) is a real-time investigation used to quantitatively detect the mutational status of exon 2 (codons 12/13) and exon 3 (codon 61) of the KRAS gene. Although point alterations in codon 12 are the furthermost KRAS mutations in CRC, this test can detect up to 19 KRAS mutations (5).

Aim of the study

This study is a retrospective, multicenter chart review carried out to compare the disease behavior, therapy outcomes, as well as progression-free survival (PFS) and overall survival (OS), according to KRAS mutational status (wild or mutant) in patients with mCRC.

This multicenter retrospective study analyzed the diagnostic and monitoring workup of 360 patients with mCRC treated at three oncology hospitals (King Fahad Specialist Hospital in Saudi Arabia in collaboration with King Faisal Specialist Hospital in Riyadh and Zagazig University Hospitals in Egypt) from February 2011 to December 2015. Data were collected from the following assessments:

KRAS mutational status was recorded in this study to determine the effects of mutation on patient outcomes. KRAS mutation analysis with real-time PCR detects the wild-type sequence and seven known mutations associated with two codons (codons 12 and 13) of the KRAS oncogene.

Real-time PCR with eight primer sets was used to amplify the region of the KRAS gene containing codons 12 and 13. A set of eight probes was used to detect the KRAS type (wild type or mutant) and had the ability to identify mutations up to 1% in a wild-type background.

For statistical analysis, patients in this study were categorized into two groups on the basis of the KRAS mutational status: KRAS wild type and KRAS mutant type.

The study protocol was approved by the Institutional Review Board of King Fahad Hospital, Saudi Arabia (ONC0310) and was conducted in accordance with the Helsinki Declaration of 1964 (revised 2008). Due to the retrospective nature of this study, the need for informed consent was waived.

SPSS version 17.0 was used for statistical analysis. Quantitative data are presented as means and standard deviations. Parametric and non-parametric t-tests were used for comparison of two independent groups. The Kaplan-Meier analysis was performed to assess OS. Log-rank assessment was performed to compare survival between groups and was used to calculate P values for the differences between groups. 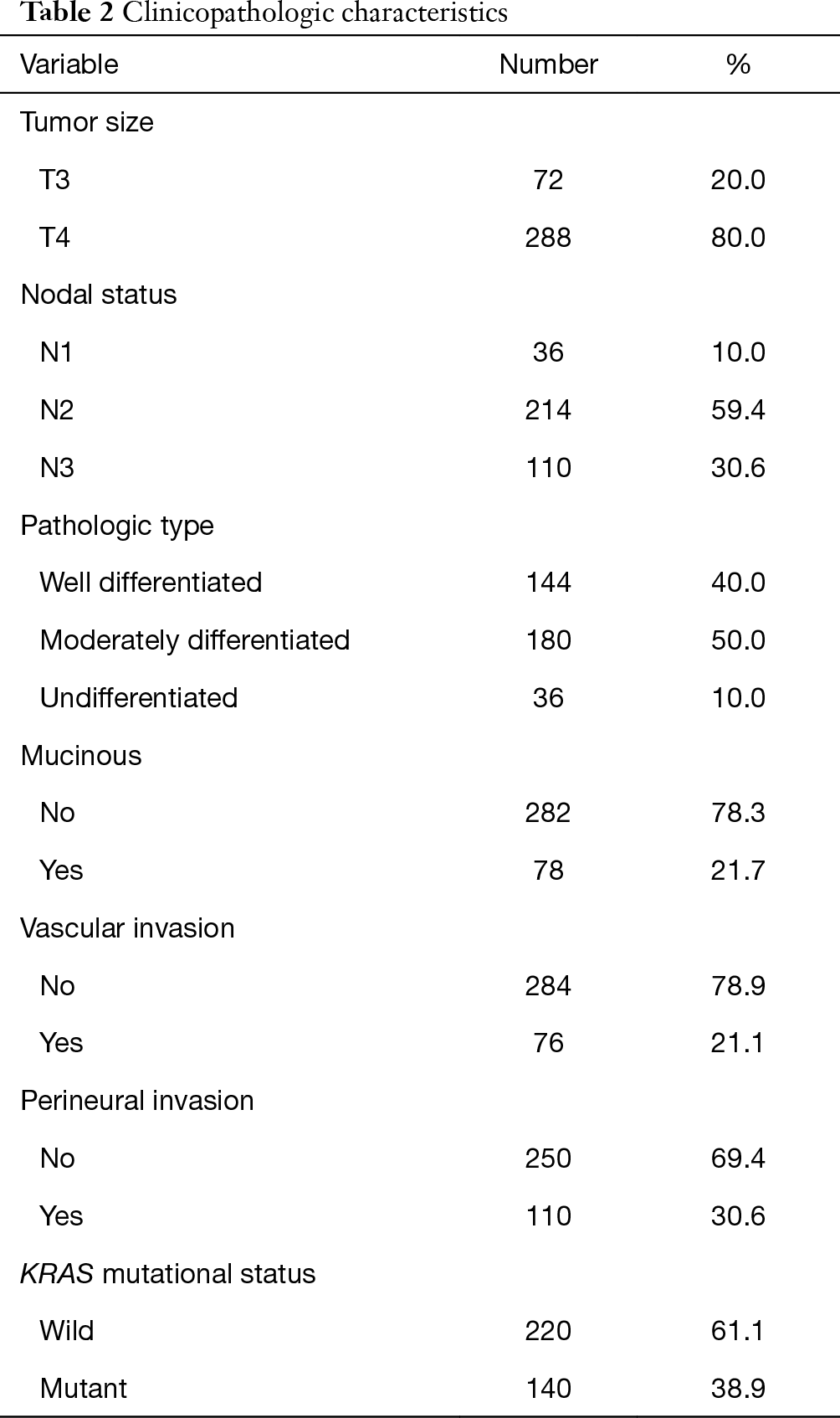 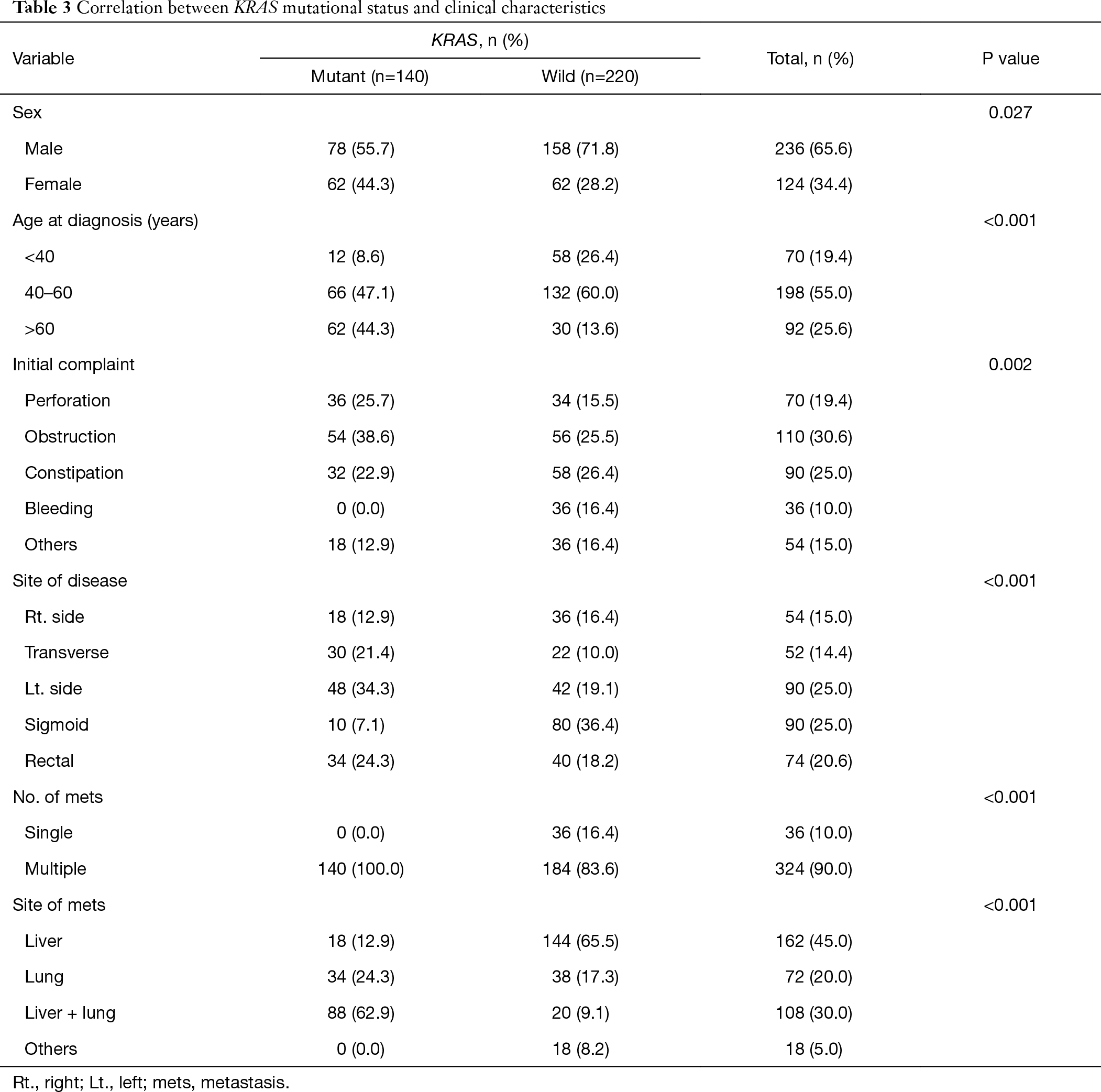 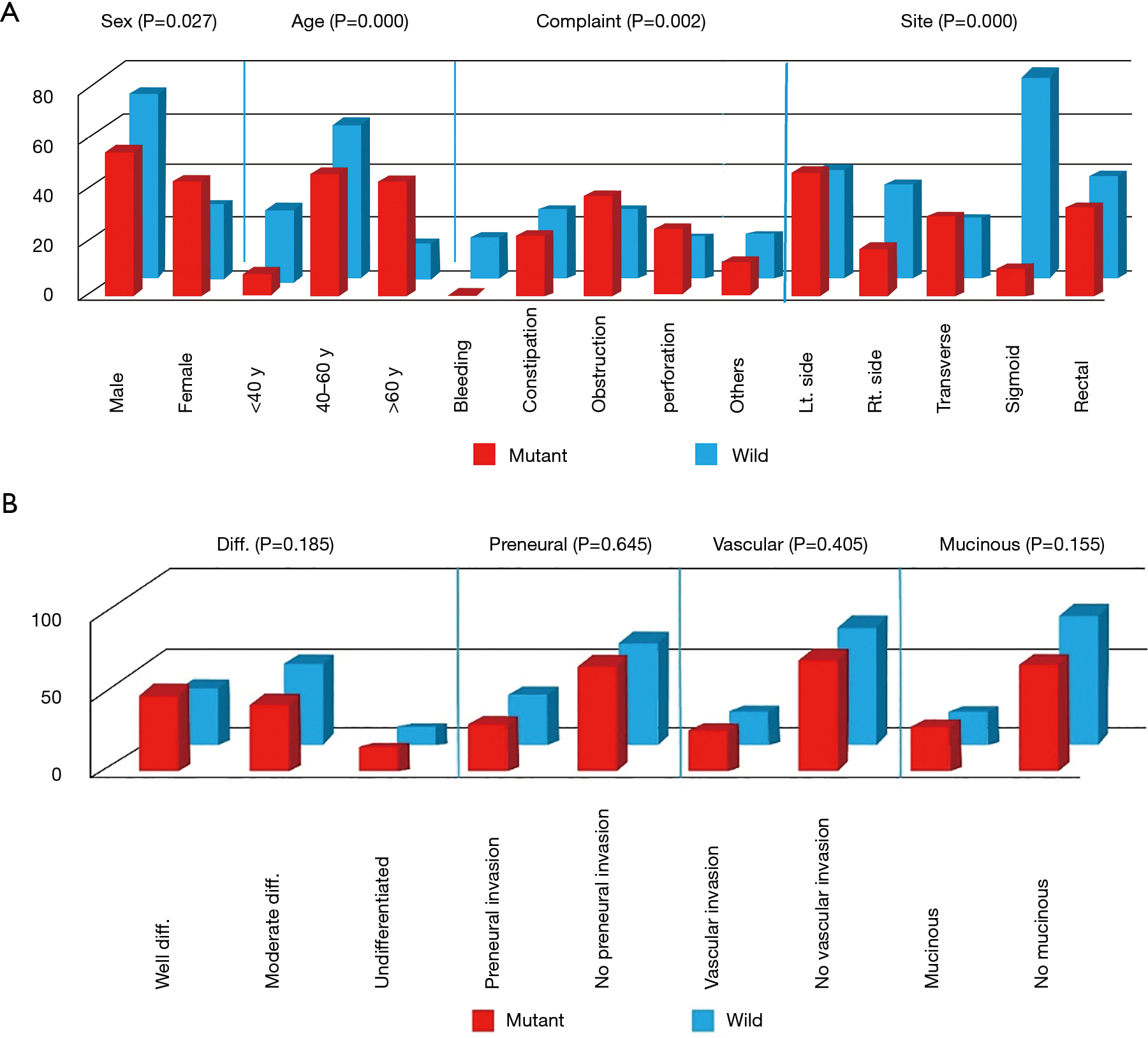 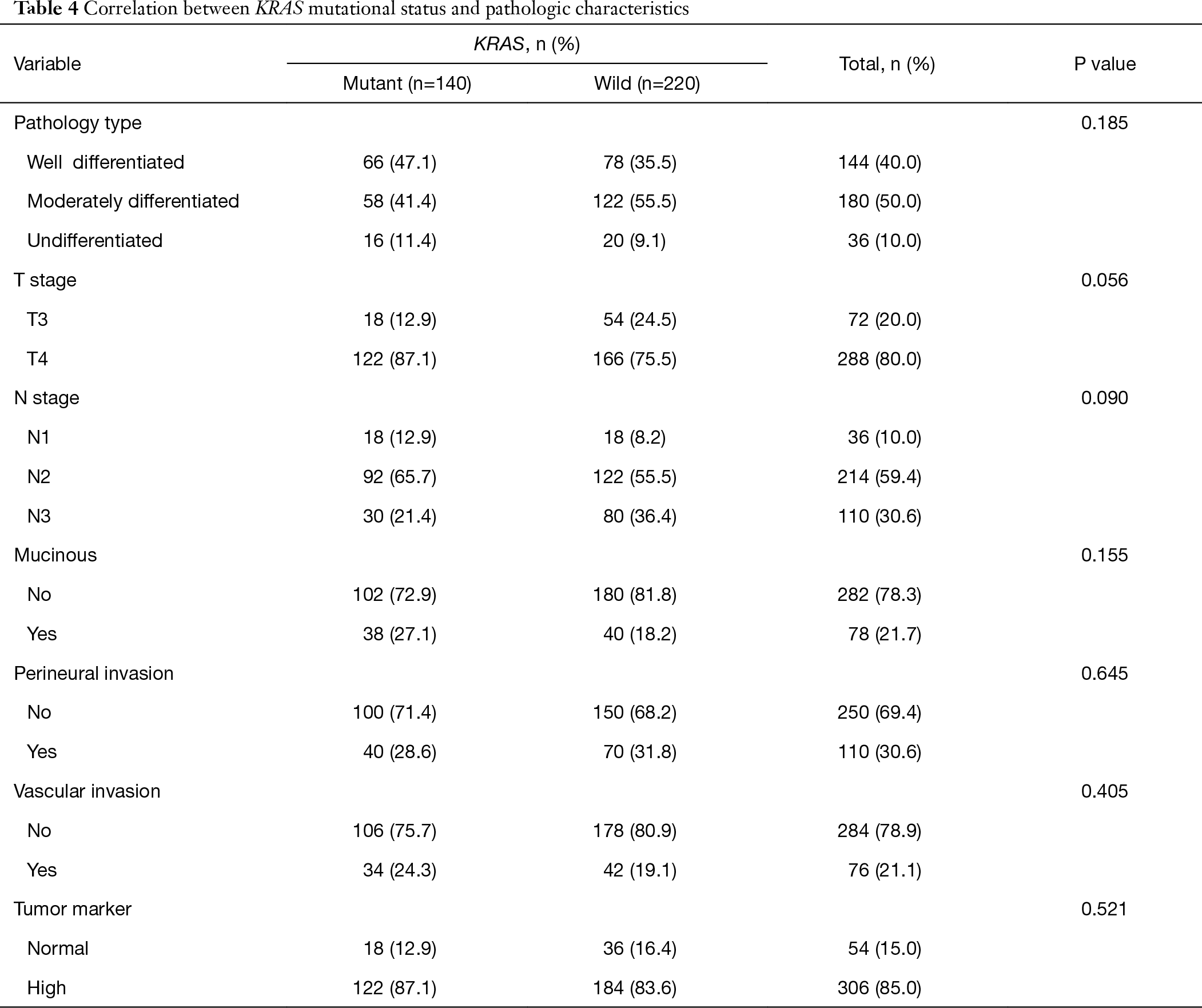 Cancer-related death occurred in 132 cases, and most of these cases had a KRAS mutation (P=0.001). A statistically significant relationship was seen between the KRAS mutation type and PFS and OS, with a P value of 0.001 and 0.002, respectively (Table 5). 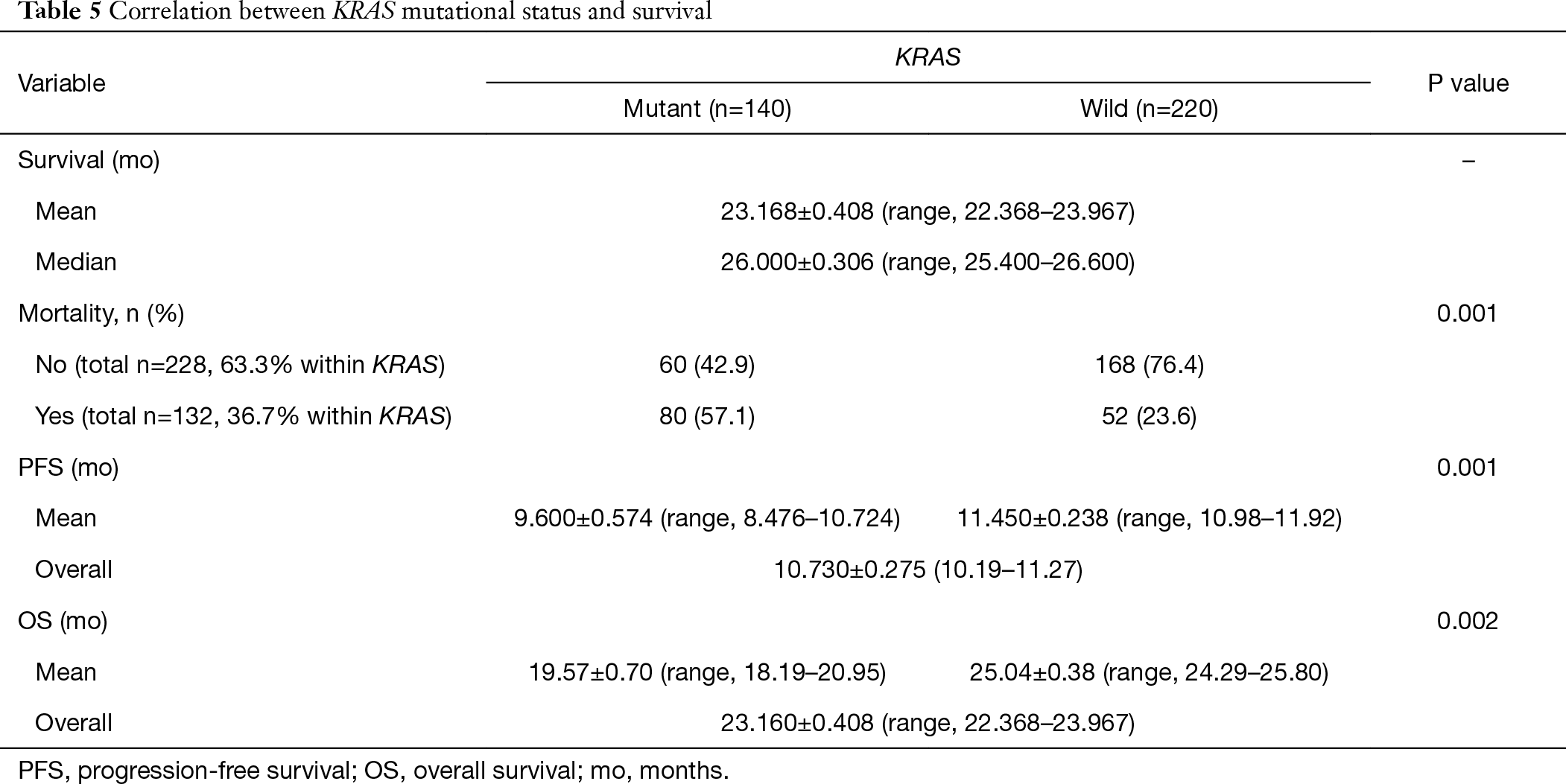 Colorectal malignancies account for most of the malignancy-related mortality worldwide among male and female patients. In 2016, 1,344,900 new CRC cases were detected in the United States, and an estimated 491,900 persons died of CRC (6).

Since 2000, a decrease in the incidence and mortality rates of CRC was noted. This decrease is attributable to lifestyle changes including reduction in red meat consumption, increase in the use of aspirin, and decrease in smoking, as well as increased utilization of screening tests and improvements in treatment, especially targeted therapy.

An interesting international study by Andreyev et al. (8) evaluated 2,721 patients with CRC from 22 research groups in 13 different countries. This study, known as the RASCAL study, clarified the relationship between KRAS mutational status and outcomes. The authors concluded that the presence of a KRAS mutation was significantly associated with a poorer prognosis.

In oncology, any improvement in survival is considered an appropriate measurement of the clinical outcome and is considered the most important endpoint. On the basis of the Food and Drug Association guidelines, OS was defined as “the time from randomization until death from any cause”, and it was measured in the intention-to-treat population, whereas PFS was identified as “the time from randomization until objective tumor progression or death”.

A statistically significant relationship was seen among patient characteristics (age and sex), cancer site, and an initial presentation with KRAS mutation status. Our findings are comparable to those of previously reported studies. Imamura et al. (9) evaluated KRAS mutation in codons 12/13 in 1,261 patients. Similar to that in our study, these mutations were detected in 36% of patients and a high mortality was noted in this group. Kim et al. (10) reported on 143 patients in whom the incidence of liver metastases was higher than that of metastases at other sites (P<0.001); however, the incidence of KRAS mutation was higher in patients with lung metastasis (P=0.003). Finally, Huang et al. (11) studied KRAS mutation in 205 patients and found the mutation in 42% of the patients. Higher OS and PFS were observed in patients with wild-type KRAS than in those with mutant KRAS (OS: 23 vs. 18.7 months; PFS: 10.2 vs. 7.9 months).

The results of our study are in contrast to those of the study by Karapetis et al. (12) which was performed in 393 patients. In this study, KRAS mutation was found in about 41% of patients, with these patients being treated with either cetuximab or best supportive care only. Zocche et al. (13) also reported similar findings in a study analyzing 149 patients with stage IV disease treated with FOLFOX-4 or a modified FOLFOX-6 regimen as a first-line treatment. The main difference between our study and these two studies was the way in which the data were analyzed. In our study, the patients’ age was analyzed in three groups, rather than in only two groups. Another contributing factor may be that we analyzed the data based on four anatomical locations (proximal colon, transverse colon, distal colon, and rectum), as opposed to only the colon and rectum. Furthermore, in our study, we classified the metastatic sites as either single or multiple sites; however, in the other studies, more metastatic subgroups were analyzed.

On the contrary, we found that KRAS mutation had no significant association with different pathologic findings except for T stage (with a strong tendency toward statistical significance, P=0.056). Birgisson et al. (14) and Huang et al. (11) also reported similar findings, except for T stage and vascular invasion. A possible explanation for this finding could be that most of the patients in these trials had stage T3 (71.7%) cancer, whereas most of the patients in the current study had stage T4 (80.0%) disease.

The main cause of mortality in cases with CRC is related to distant metastasis. In approximately 33% of the cases, the metastatic site was the liver (15,16) and the metastases may be present as synchronous metastases in about 25% of patients at the time of primary presentation. Nearly 50% of patients who underwent major dissection of CRC developed distant disease later. Santini et al. (17) revealed that KRAS C12V mutations were more frequently associated with hepatic metastasis.

Furthermore, a new trial on 143 Korean patients with metastatic or recurrent CRC showed that the lungs are the primary locations of distant metastasis in mutant KRAS cases. In this study, the metastatic site was significantly correlated with the KRAS mutational status, similar to the findings reported by Kim et al. (10).

A statistically significant relationship was found between KRAS mutational status and survival. This finding has been previously reported in the landmark RASCAL study on CRC (18), which found that cross mutations may indicate an unfavorable prognosis in CRC, especially in the advanced stages, which might lead to disease recurrence and mortality.

In conclusion, in patients with mCRC, KRAS molecular testing is a good prognostic and predictive tool. Additional molecular studies are needed to further explain the heterogeneity of the disease, in order to select the optimal treatment on the basis of molecular evaluation.

Ethical Statement: The study protocol was approved by the Institutional Review Board of King Fahad Hospital, Saudi Arabia (ONC0310) and was conducted in accordance with the Helsinki Declaration of 1964 (revised 2008). Due to the retrospective nature of this study, the need for informed consent was waived.