Cholangiocarcinomas arise from the epithelial cells of intrahepatic and extrahepatic bile ducts. These malignancies are rare in the United States accounting for approximately 3 percent of all gastrointestinal malignancies, and 10 percent of all primitive liver cancers. The incidence in the general population is one to two cases per 100,000 (1). The incidence of intrahepatic cholangiocarcinomas (ICC) has been rising over the past two decades in Europe, Asia, Australia, Japan, and North America for unclear reasons.

Cholangiocarcinomas generally have a very poor prognosis. Due to its location the tumor rarely produces any symptoms until late in its course and is generally diagnosed at an advanced and unresectable stage. For those diagnosed at an early stage, surgery remains the only possibility for cure and yet still only provides patients with a 20-30 percent five-year survival. Treatment options for advanced disease are limited. Systemic chemotherapy is increasingly being used however many studies report a dismal median survival of approximately 6 months (2).

Literature on specific chemotherapy regimens is limited because most series are small. The most active agents include 5-FU, gemcitabine, oxaliplatin and cisplatin. No single drug or combination has been able to demonstrate a consistent and significant increase in survival.

Sorafenib is a multikinase inhibitor that inhibits tumor growth and angiogenesis by inhibiting intracellular Raf kinases (CRAF and BRAF) as well as cell surface kinase receptors (VEGFR-1, VEGFR-2, VEGFR-3, PDGFR-beta, FLT-3, and RET). It is FDA approved for the treatment of hepatocellular carcinoma and renal cell carcinoma. It has also shown some activity in angiosarcoma, gastrointestinal stromal tumors, and thyroid cancer. The potential efficacy of this agent for treating cholangiocarcinoma is largely unknown but early studies to date have not shown a clear benefit over commonly used chemotherapy agents and combinations (3,4).

Here we describe a case of locally advanced cholangiocarcinoma who was treated with sorafenib as a 4th line agent after progressing on some of the more commonly used chemotherapy agents. 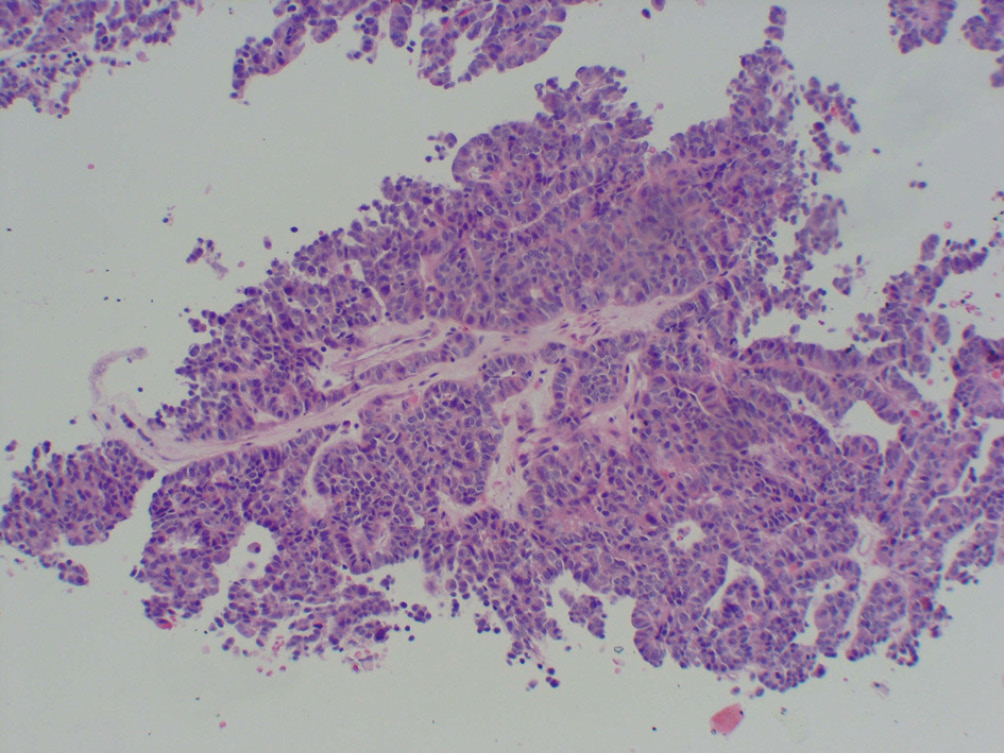 With evidence of invasion into the right branches of the portal vein the patient was deemed unresectable after consultation with both local and University Hospital hepatobiliary and transplant surgeons. Treatment was initiated in February 2008 with a combination of gemcitabine and oxaliplatin (GEMOX). After an initial period of disease stability, an MRI after his 12th cycle of GEMOX in September 2008 showed disease progression. He remained on gemcitabine but with progressive disease, the oxaliplatin was changed Capecitabine. A MRI after only 4 cycles in December 2008 showed continued local progression. In January 2009 his chemotherapy was again changed to 5-FU and Leucovorin. A follow up MRI after only 2 months, in March 2009, again revealed progressive disease with an ill defined enhancing hypovascular mass in segment VII on the liver, associated with segmental biliary dilatation, representing intrahepatic extension of the cholangiocarcinoma.

After progressing on three of the most commonly used chemotherapy regimens, the patient was started on Sorafenib in May 2009 based on initial phase II trials and case reports suggesting a possible benefit of the drug in cholangiocarcinoma (5). The patient had jaundice with a peak total bilirubin of 4.1 mg/dL prior to initiating treatment with Sorafenib. Soon after starting sorafenib his jaundice resolved and his bilirubin has been within normal limits since Jan 2010 with his latest value being 0.7 mg/dL in December 2012. Since initiating Sorafenib, imaging of the liver has been performed every 3-4 months with a MRI and continually revealed stable disease. The most recent imaging was a PET/CT in October 2012 which continues to show a stable ill-defined space occupying mass in the liver with no focus of hypermetabolic activity within the mass or anywhere else in the body.

Overall, the patient has tolerated treatment very well. He was started on the standard dosing of 400 mg twice a day. He experienced mild diarrhea that has been well controlled with the use of lomotil. He initially developed a mild desquamating rash and grade I hand-foot syndrome has improved over time and well managed with topical moisturizers. In December 2009 he experienced an episode of mild epistaxis secondary to thrombocytopenia, requiring the cessation of the drug for a period of 7 days. It was resumed at a lower dose of 200 mg twice a day. Attempts to increase the drug dosage have resulted in recurrent thrombocytopenia and the patient has remained on 200 mg twice a day since June 2011. The patient’s disease has now remained stable for 44 months, far exceeding any reports that we were able to find in the current literature.

Sorafenib is a small molecule that inhibits tumor-cell proliferation and tumor angiogenesis and increases the rate of apoptosis in a wide range of tumor models. It acts by inhibiting the serine-threonine kinases Raf-1 and B-Raf and the receptor tyrosine kinase activity of vascular endothelial growth factor receptors (VEGFRs) 1, 2, and 3 and platelet-derived growth factor receptor β (PDGFR-β) (6).

In cholangiocarcinoma cells, it interferes with the STAT3 signaling pathway, reduces cellular expression of Mcl-1 and sensitizes cells to TRAIL mediated apoptosis (7). It may also work by inhibiting the VEGF stimulation produced by the cholangiocytes (8).

Sorafenib has not gained FDA approval for use in advanced cholangiocarcinoma. Despite showing some early promise (9), results of trials using Sorafenib have been rather disappointing with response rates and median overall survival similar to commonly used chemotherapeutic agents.

A phase II trial using Sorafenib as a single agent in advanced cholangiocarcinoma and gall bladder cancer failed to demonstrate a clinically significant objective response, but did show a positive impact on survival that is comparable to most active chemotherapy agents (4). A more recent trial reported a progression free survival of 2.3 months, with median overall survival of 4.4 months (10).

The role of Sorafenib in cholangiocarcinoma remains uncertain. There is an ongoing trial evaluating its potential benefit when combined with gemcitabine and oxaliplatin in patients with advanced cholangiocarcinoma. Our patient has derived a very impressive benefit from the drug with a progression-free-survival approaching 4 years. The side effect profile has been very manageable and he has maintained an excellent quality of life. We hope our patient provides promise that in the future we may be able to selectively identify individuals that may derive a similar benefit.