A 55 year-old Caucasian male presented to his family practitioner with the complaint of a chronic cough and underwent a chest X-ray. The X-ray indicated a lung nodule and he was subsequently referred for a CT of the chest. This revealed no lung parenchymal abnormalities. However, a mass in the tail of the pancreas was incidentally found. A pancreas protocol CT 3 mm slice three phase was ordered which showed a 2.6 cm × 2.4 cm enhancing mass in the tail of the pancreas close to, but not involving the splenic artery and vein. No pancreatic ductal dilation or adenopathy was noted (Figure 1). Based on these findings, the patient was referred to multidisciplinary clinic and surgical oncology. 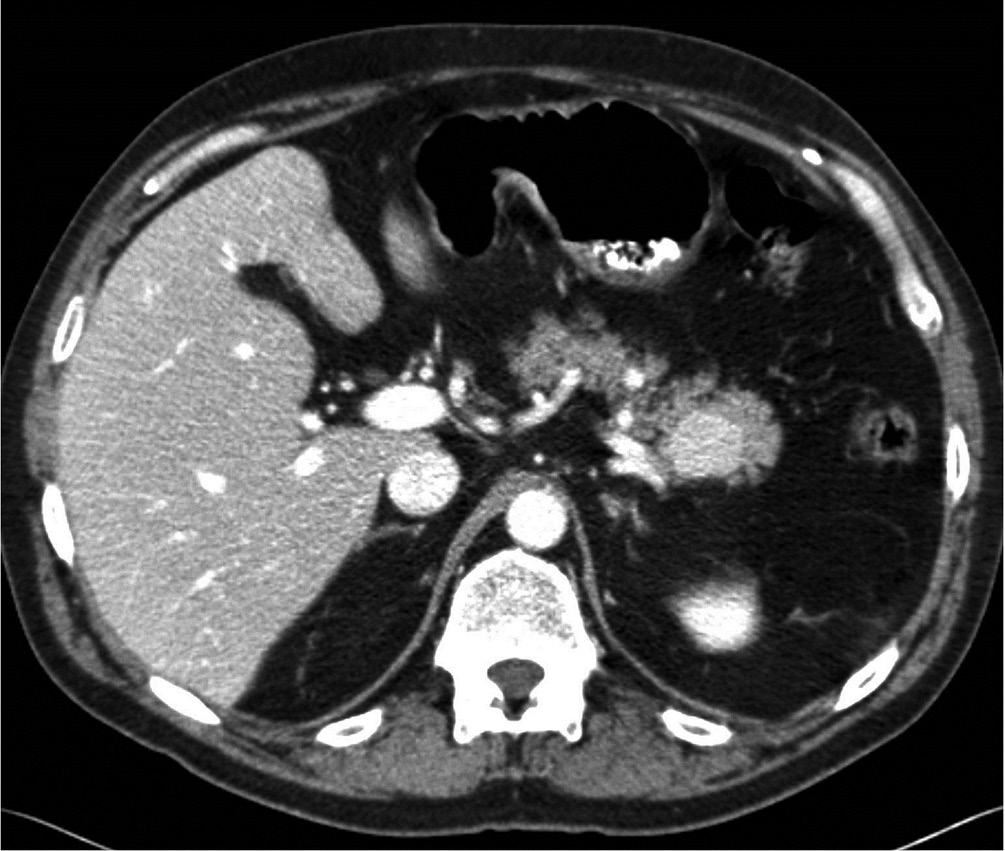 Upon this presentation, the patient was asymptomatic. His medical history included a remote history of seizures and well-controlled hypertension. He had had no prior surgeries. His family history included prostate and breast cancer at ages greater than 50. On physical examination, he was afebrile with stable vital signs, no significant adenopathy, and no abdominal findings. Lab results indicated normal AST, ALT, and alkaline phosphatase values, a CEA of 0.8, a CA 19-9 of 6, a Chromogranin A of 11.8, and normal electrolytes.

Differential diagnoses included nonfunctioning neuroendocrine tumor, mucinous cystadenoma, mucinous adenocarcinoma, serous cystadenoma, intraductal papillary mucinous neoplasm (IPMN), solid pseudopapillary tumor, and uncommonly, a metastatic lesion. The patient was offered endoscopic ultrasound evaluation but he declined and elected to proceed with surgical resection. After receiving proper vaccines, the patient was taken to the operating room and underwent an uncomplicated laparoscopic distal pancreatectomy and splenectomy. Intraoperative frozen section demonstrated a benign intrapancreatic accessory spleen (IPAS) (Figure 2). The patient recovered well from the operation and was seen to be in good condition on his one and only follow-up visit. 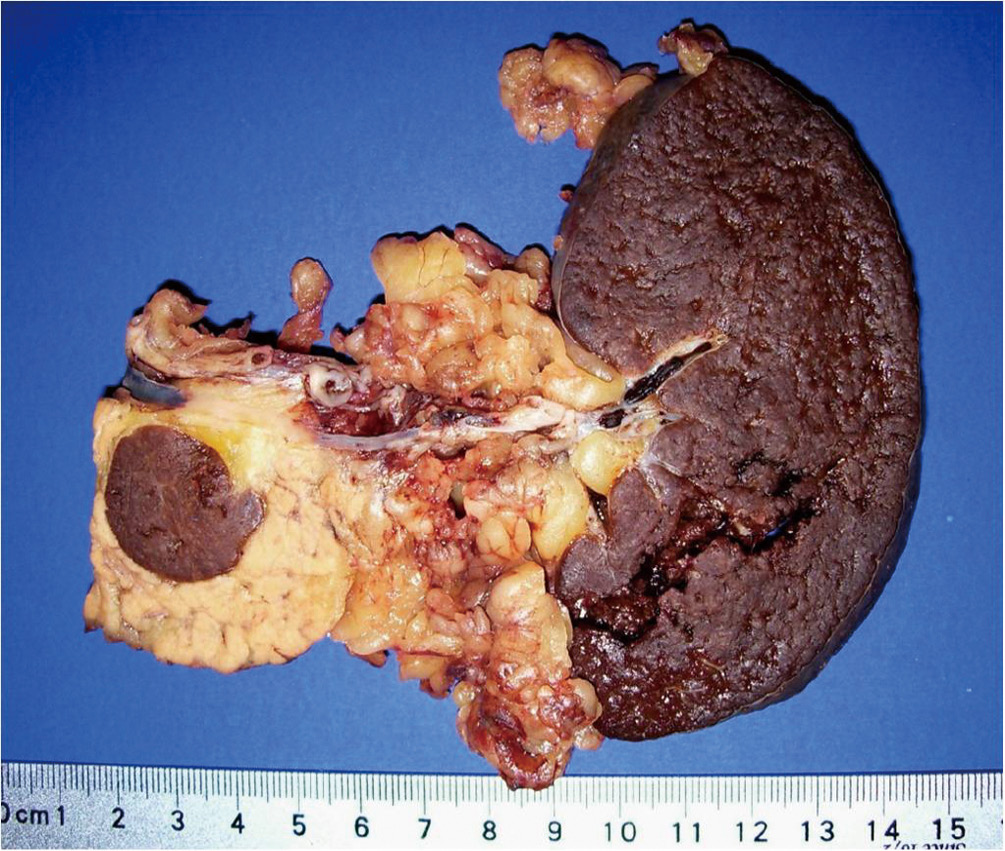 As part of a work-up for sinus surgery, a 64 year-old Caucasian female underwent a CT scan of the chest, which demonstrated a questionable pancreatic tail mass of approximately 3 centimeters in size. She subsequently underwent a pancreas protocol 3-phase 3 mm slice CT scan of the abdomen, which revealed a mass near the posterior margin of the tail of the pancreas. It demonstrated greater homogeneity than the pancreatic tissue, but similar attenuation as the spleen, making IPAS high on the differential diagnosis. As such, the patient underwent a Liver-Spleen Tagged Red Blood Cell scan, which demonstrated a normal uptake pattern in the spleen and the liver, but no uptake in the mass.

The patient was referred to surgical oncology and underwent further workup. A pancreatic protocol CT of the abdomen demonstrated a 2.8 cm × 3.0 cm centimeter questionable region in the tail of the pancreas, unchanged since the previous CT scan of the abdomen, without a clear distinction between a true lesion and abnormal pancreatic morphology. An EUS with fine-needle aspiration was subsequently performed, which demonstrated lymphatic material suggestive of an accessory spleen.

While the evidence from CT and EUS made an accessory spleen the likely diagnosis, the negative nuclear medicine scan in this patient produced a dilemma in which IPAS could not be definitively diagnosed and malignancy could not be entirely excluded. After discussion with the patient, she elected to proceed with surgery. An uncomplicated laparoscopic distal pancreatectomy with splenectomy with mobilization of the splenic flexure was performed. Final pathology demonstrated an IPAS. The patient did very well postoperatively and was discharged to continued care by her primary care physician.

Intrapancreatic accessory spleens are typically about one to two centimeters in diameter (2,4). Structurally, they are indistinguishable from the spleen and obtain their blood supply from branches off of the splenic artery (5). A necropsy study conducted by Halpert and Györkey found that lesions that affected a patient’s spleen typically affected their accessory spleen(s) as well, due to their anatomic similarity (4).

Accessory spleens appear similar to hypervascular pancreatic tumors including acinar cell carcinomas and neuroendocrine tumors on radiologic studies including ultrasound, magnetic resonance imaging, and computed tomography (2). Additionally, patients with accessory spleens are usually asymptomatic. Both patients presented here had no symptoms relating to their accessory spleens, which were discovered incidentally.

Several diagnostic studies have been used to define IPAS. Table 1 and Table 2 Ota et al. used Single Photon Emission Computed Tomography (SPECT) images of the spleen using heat-damaged red blood cells labeled with technetium 99m to confirm a diagnosis of IPAS on a suspicious pancreatic mass (3). Brasca et al. confirmed the usefulness of this procedure and similar procedures over other nuclear medicine tests including In-111 Octreoscan (9). In another study, Ota et al. confirmed the usefulness of contrast enhanced ultrasound using Levovist (Bertox, Canada) as a contrast agent by performing the procedure on a patient who had already been diagnosed with IPAS per Technetium 99m SPECT (7). Kim et al. came to the same conclusion in a separate study, noting on the early vascular phase (7 sec) a distinct, inhomogeneous enhancement pattern, a similarity of enhancement with the spleen on the postvascular phase (areterial 30 sec and portal 90 sec), and on the hepatosplenic parenchymal phase (3-5 mins), a lengthened enhancement (10). In a separate retrospective study of seven patients, Kim et al. demonstrated the usefulness of superparamagnetic iron-oxide (SPIO)-enhanced Magnetic Resonance Imaging (MRI) in diagnosing IPAS and claimed it as being a more useful diagnostic tool than Tc-99 scintigraphy. SPIO has a greater tissue specificity for reticuloendothelial tissue and thereby causes a significant decrease in the MRI signal intensity for spleens, but not for tumors, thereby helping differentiate between the two (6). Boraschi et al. used a contrast medium specific for reticuloendothelial systems (RES) based on iron-oxide with MRI to successfully diagnose IPAS in a patient, as a signal decrease was observed in the spleen, liver, and accessory spleen within the pancreas (8). Computed Tomographic Arteriography (CTA) proved useful in IPAS diagnoses in a study conducted by Miyayama et al. CTA results on patients with IPAS demonstrated inhomogeneous enhancement patterns in the accessory spleens as well as a deep cleft between the lesion and the pancreas showing the lesion as having originated extrapancreatically, pointing to a diagnosis of IPAS. This method provides better results when diagnosing small lesions, as the cleft may not show on a CTA of a larger lesion (5). Additionally, endoscopic ultrasound (EUS) has an important role in the evaluation of pancreatic lesions. Schreiner et al. recently reported three cases in which EUS and FNA were used to make the diagnosis of IPAS (11).

IPAS is a challenging diagnosis to make. Recognizing this diagnosis in the differential for enhancing pancreatic masses especially in the tail is important because its identification precludes surgical resection. Numerous diagnostic studies have demonstrated utility in defining these lesions. If the lesion remains in question, EUS and FNA may be helpful and this literature is evolving. Clearly, if the diagnosis is in doubt, surgery is warranted.