Gastric cancer is one of the most prevalent cancers, with more than one million cases diagnosed worldwide annually (1). It was reported that males are more susceptible to developing gastric cancer from birth to age 74 compared with females (1). Gastric cancer accounts for 8.3% of all cancer-related deaths (2). The 5-year survival rate was shown to vary in patients with different stages during surgical intervention, with 94% at stage IA, 88% at stage IB, and only 18% at stage IIIC (3). Therefore, it is of great importance to identify key biomarkers for evaluating gastric cancer progression, as well as exploring potential therapeutic targets for gastric cancer therapy.

Carboxypeptidase A4 (CPA4) is a member of the Zn-containing metallocarboxypeptidase (MCP) family. It catalyzes the release of carboxy-terminal amino acids. It has been confirmed that CPA4, an important regulator of inflammation, plays an important role in tumor microenvironment (TME) formation and distant metastasis in tumor (4,5). CPA4 has been shown to be upregulated in several cancers, and is speculated to be involved in regulating the progression of several cancers, including non-small cell lung cancer (6), pancreatic cancer (7), bladder cancer (8), colorectal cancer (9), hepatocellular carcinoma (10), and breast cancer (11). For example, CPA4 expression was associated with poor prognoses by promoting cell proliferation in hepatocellular carcinoma (10). Upregulated CPA4 expression was an independent prognostic factor for patients with liver cancer (12). Sun et al. (13) demonstrated that CPA4 is associated with poor prognosis in patients with gastric cancer. However, the regulatory role of CPA4 in gastric cancer is still unknown.

In the present study, we explored the effects of CPA4 on gastric cancer progression in vitro. This study may provide a foundation for further study into therapeutic targets for gastric cancer. We present the following article in accordance with the MDAR reporting checklist (available at https://jgo.amegroups.com/article/view/10.21037/jgo-22-987/rc).

Construction of lentiviruses for CPA4 knockdown

According to the significantly dysregulated proteins in shCPA4 compared with shCtrl cells, a PPI network of CPA4 was generated. Analysis of the interaction network was performed using the STRING database (https://string-db.org/).

AGS cells in logarithmic growth phase were subjected to cell trypsin digestion (#25200-720; Gibco), resuspended, then counted. About 500 cells/well were seeded in a 6-well plate, and each sample was performed in triplicate. After culture for 14 days, the cells were washed with phosphate-buffered saline (PBS), fixed with 4% paraformaldehyde for 30–60 min, and washed with PBS again. Then, the cells were stained with impurity-free crystal violet staining solution for 10–20 min, washed with ddH2O, and photographed under a fluorescence microscope (XDS-100; Caikon, Shanghai, China).

AGS cells in logarithmic growth phase were subjected to cell trypsin digestion (#25200-720; Gibco; Thermo Fisher Scientific, Inc., USA), resuspended, then counted. Approximately 2,000 cells/well were seeded in each well of a 6-well plate and cultured at 37 ℃ with 5% CO2. Celigo® Image Cytometer (Nexcelom) was used to evaluate the number of cells by scanning green fluorescence daily for 5 days at room temperature (15).

The Transwell assays were applied to evaluate the cell migration and invasion of cells. A 24-well Transwell chamber and 8.0-µm pore membranes (Corning, USA) coated with Matrigel (BD Biosciences) were used for the cell invasion assay. Approximately 1.0×105 cells/well in 100 mL serum-free Dulbecco’s modified Eagle’s medium (DMEM) were seeded in the top chamber for 6 h at 37 ℃. Then 500 mL medium containing 30% fetal bovine serum (FBS) was placed into the lower chamber. The Transwell was washed, fixed with 4% paraformaldehyde, and stained with 0.1% crystal violet. Eventually, 5 visual fields were randomly selected, and the cell numbers were counted under a 400× microscope. The cell migration assay was similar to that of invasion assay except that the chamber was not coated with Matrigel.

About 5.0×105 cells were added into a 6-well plate and maintained at 37 ℃ with 5% CO2 until the cell growth coverage reached 70%. The cells were collected, washed with pre-chilled D-Hanks, and treated with 1× binding buffer. Then, the cells were stained with Annexin V-APC for 10–15 min and observed under a fluorescence microscope (IX71, OLYMPUS, Tokyo, Japan).

About 2.0×106 cells were seeded into a 6-cm dish after lentiviral infection for 5 days. The dishes were maintained at 37 ℃ for 40 h until the confluence of cells reached about 80%. The cells were washed with pre-chilled D-Hanks (pH 7.2–7.4) and fixed with 70% ethanol overnight at 4 ℃. After digestion with RNaseA, the cells were labeled with a solution of 40× PI, 100× RNase, and 1× D-Hanks at a ratio of 25:10:1,000 and were analyzed with Cell Lab Quanta Beckman Coulter to measure fluorescence. The cell cycle was analyzed by ModFit LT 3.2 (Verity Software House).

GraphPad Prism 8 (San Diego, CA, USA) was used for the statistical analysis and graph drawing. Student’s t-test or one-way ANOVA was performed for comparative analyses depending on the number of groups. Data are exhibited as mean ± standard deviation (SD). P<0.05 indicated that the difference was statistically significant. *, P<0.05; **, P<0.01; ***, P<0.001.

The expression of CPA4 was significantly upregulated in the gastric cancer cell lines AGS, SGC-7901, MGC-803, and BGC-823, with the highest expression level in AGS cells and the lowest in MGC-803 cells (Figure 1A). After lentivirus transfection with shCPA4, the mRNA and protein expression levels of CPA4 were significantly decreased (P<0.01; Figure 1B,1C), which demonstrated the successful construction of knockdown samples. 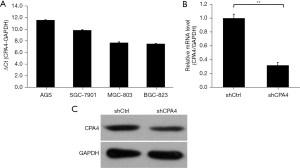 Overexpressed CPA4 is associated with induction of EMT

The role of CPA4 in gastric cancer was assessed by testing the expression levels of EMT-related markers in transfected cells. In the western blot analysis, we found that E-cadherin was upregulated, while N-cadherin and Vimentin were downregulated in shCPA4 cells (Figure 2A), indicating that overexpressed CPA4 was associated with the induction of EMT. As transcription factors of EMT, p-NFκB-p65, Slug, Twist, and Snail protein expression levels were significantly downregulated in shCPA4 compared with shCtrl cells (Figure 2B). These results demonstrated that CPA4 promotes EMT processes in gastric cancer cells. 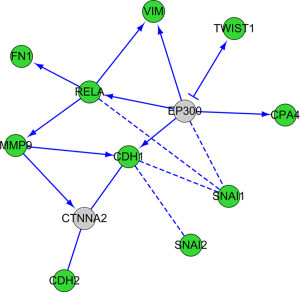 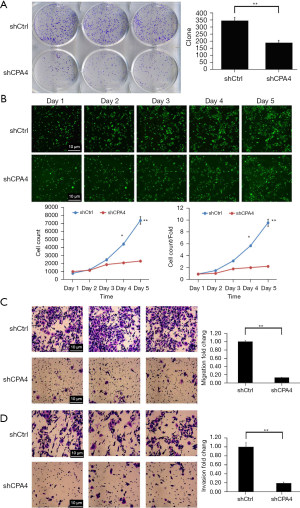 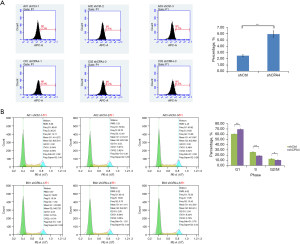 As mentioned above, CPA4 regulates cancer through various signaling pathways. However, in the present study, we also found that EMT processes were induced. EMT is an important process for vertebrate embryonic development, driven by transcription factors such as SNAIL1, TWIST1, and ZEB1 in mesenchymal programs during embryogenesis, and deletion of SNAIL1 in mice results in embryonic lethality with impaired mesoderm development (17,18). In the present study, the expression levels of SNAIL and TWIST were significantly downregulated by shCPA4. The EMT-related biomarkers E-cadherin, N-cadherin, and Vimentin were dysregulated by shCPA4. These results demonstrated that CPA4 induces EMT in gastric cancer cells. EMT is involved in the progression of many cancers. It may also be involved in gastric cancer progression by arresting the cell cycle at G1 phase. Lovisa et al. (19) found that transgenic expression of either TWIST or SNAIL is sufficient to promote prolonged TGF-β1-induced G2 arrest of tubular epithelial cells, limiting the cells’ potential for repair and regeneration. SNAIL can block the cell cycle and confers resistance to cell death (20). Yang et al. (21) demonstrated that the role of cell cycle state in the regulation of TGF-β-induced EMT and apoptosis, and also confirmed that TGF-β induced EMT via a cell cycle-dependent mechanism. Therefore, we can assume that EMT is regulated by cell cycle arrest caused by the dysregulation of CPA4. Altogether, CPA4 was upregulated in gastric cancer cells, and overexpressed CPA4 promotes cancer cell progression through EMT by inducing cell cycle arrest. We speculate that administering a molecule that can specifically inhibit the transcription or translation of the CPA4 gene in tumor cells, or specifically inhibit the expression or activity of the CPA4 protein, may inhibit the growth, proliferation, differentiation, and/or survival of tumor cells. However, the regulation process is a complex scientific issue that requires more experiments for verification, as in vivo experiments are lacking.

The present study confirmed the role and function of CPA4 in gastric cancer in vitro. It has revealed that CPA4 was significantly upregulated in AGS gastric cancer cells, and knockdown of CPA4 was related to inhibited cell progression via arresting the cell cycle and inducing EMT.

Funding: This study was supported by the Medical Scientific Research Foundation of Zhejiang Province (No. 2021KY594); and Beijing Bethune Charitable Foundation of China (No. WCJZL202111).

Reporting Checklist: The authors have completed the MDAR reporting checklist. Available at https://jgo.amegroups.com/article/view/10.21037/jgo-22-987/rc

Conflicts of Interest: All authors have completed the ICMJE uniform disclosure form (available at https://jgo.amegroups.com/article/view/10.21037/jgo-22-987/coif). The authors have no conflicts of interest to declare.