The number of patients undergoing allogeneic hematopoietic stem cell transplantation (aHCT) has significantly increased worldwide in the last 3 to 4 decades (1,2). This, coupled with an improving survival of these patients with time, has warranted an increased focus on the long-term complications of allogeneic HCT, especially secondary malignancies. Secondary malignancies form an important part of the long-term complications after aHCT and are a prominent cause of late mortality (3).

The risk of developing secondary solid tumors has been reported across studies to be 2 to 6 times higher than the age and gender-matched general population (4,5). The risk of developing esophageal carcinoma (Ca) after aSCT is thought to be much higher than the risk of developing other types of secondary solid tumors. The EBMT study by Kolb and colleagues showed a standardized incident ratio (SIR) of >30 for esophageal cancer in patients after allogeneic HCT (6) while studies in the Japanese population (known to have a lower risk of chronic Graft versus host disease), showed an SIR ranging between 8.5–23.4 (7,8). This increased risk was also found to persist life-long, warranting a need for continued surveillance for these malignancies (7).

Esophageal carcinoma after aHCT has mostly been described as part of large registry-based studies or in the form of case reports or small case series. There is very little data focusing entirely on esophageal cancers after allogeneic HCT with information on the staging, treatment modalities, causes of death, and other survival parameters in this rare cohort of patients. We conducted this study to describe the baseline characteristics, treatment received and outcomes of patients who developed esophageal cancer after allogeneic HCT. We present the following article in accordance with the STROBE reporting checklist (available at https://jgo.amegroups.com/article/view/10.21037/jgo-22-700/rc)

For this retrospective case series, records of adult (≥18 years) patients who underwent aSCT at Princess Margaret Cancer Centre, University Health Network, Toronto from Jan 1990–Dec 2020 were screened to identify patients who subsequently developed primary esophageal cancer. Patients with cancer of the oral cavity or stomach extending into the esophagus were excluded. Patients with genetic syndromes predisposing them to secondary malignancies (e.g., dyskeratosis congenita) were also excluded. The study was conducted in accordance with the Declaration of Helsinki (as revised in 2013). The study was approved by institutional ethics board of University Health Network , Toronto, Canada and individual consent for this retrospective analysis was waived.

Disease and treatment characteristics including previous hematological malignancy and transplantation details, details of esophageal cancer including treatment received and outcomes were collected from electronic patient records. Tumor–node–metastasis classification was done according to the International Union against Cancer (UICC) criteria (9).

Estimates of survival were calculated using the Kaplan-Meier method. Overall survival (OS) was defined as the time from diagnosis of esophageal cancer to date of death from any cause or date of the last follow-up. SIR was defined as the ratio of the observed number of cancer cases to the expected number of cases multiplied by 100. All analysis was done using SPSS v22.0.

Baseline and transplant characteristics of all patients are summarized in Table 1. During the 30-year study period, a total of 2,883 allogeneic hematopoietic stem cell transplants were performed at our institute. In this population, 10 patients were diagnosed to have esophageal cancer after aHCT. The incidence rate per year would be 10.41 per 100,000 population. Thus the SIR of esophageal cancer after aHCT would be 1.96. This is in comparison to incidence in province of Ontario Canada (5.3 cases per 100,000 population) (10).

Among the 10 patients with esophageal Ca, males were 60% (n=6) and the median (range) age at the time of Allo HCT was 53.5 [39–70] years. The most common indication of transplant was acute myeloid leukemia (AML) in 50% (n=5) patients followed by acute lymphoblastic leukemia (ALL) in 20% (n=2) patients. Six patients (60%) received a myeloablative conditioning regimen and four patients (40%) received a reduced intensity conditioning regimen. Seven patients (70%) received total body irradiation (TBI) as part of their conditioning regiment. The most common GVHD prophylaxis used was cyclosporine—mycophenolate in 50% (n=5) patients followed by cyclosporine methotrexate in 20% (n=2) patients. Grade 2-3 acute GVHD (aGVHD) was seen in 60% (n=6) patients and most common site of aGVHD was skin (83.3%; n=5) followed by gastrointestinal (50%; n=3). All except one patient (90%; n=9) had chronic GVHD (cGVHD). The common sites affected by cGVHD were mouth (100%) and skin (88.9%). Chronic GVHD was severe in 88.9% (n=8) of patients and mild in one patient (11.1%).

All patients underwent treatment for esophageal cancer with surgery, chemotherapy, and/or radiation therapy. Esophagectomy was part of the therapeutic armamentarium in 50% (n=5) patients with 2 patients (20%) having surgery as their only treatment. The remaining 3 patients received neoadjuvant chemo-radiotherapy as part of the CROSS protocol (11) before undergoing Esophagectomy. Two patients (20%) were treated with palliative intent with radiation therapy +/− chemotherapy. Remission was defined as no evidence of disease by imaging 6 weeks after the end of planned treatment. At the end of planned treatment, 70% of patients (n=7) achieved remission while 1 patient had progressive disease with new brain metastasis. This patient was subsequently treated with a palliative intent. Others (n=2) achieved only partial disease control which subsequently progressed. All patients of esophageal cancer who underwent surgery (including patients treated under CROSS protocol) went into remission at end of treatment. There were no cases of relapse of the disease once remission was achieved. Individual patient characteristics, disease particulars, and treatment received by all the patients with esophageal cancer after allogeneic HCT are summarized in Table 2. 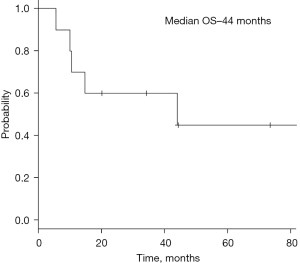 The mechanism of development of esophageal Ca after aHCT has not been extensively studied. The pathogenesis for esophageal SCC is thought related to chronic irritation and inflammation of esophageal mucosa (13). cGVHD is thought to predispose to SCC by chronic injury and inflammation of the mucosal epithelium (17). This, coupled with the decreased anti-tumor immunity conferred by long-term immunosuppressive agents possibly leads to SCCs of the esophagus (8). There is scant data on the biological and genetic differences between de novo malignancies and secondary malignancies after aHCT. Akiyama and colleagues studied the genetic profile of a single patient with esophageal Ca after aHCT. They proposed that cGVHD and prolonged used of immunosuppressives led to accumulation of mutations (including TP53), which in turn led to epigenetic modifications, and impairment of checkpoint and DNA repair mechanisms leading to esophageal SCC (22). The additive role played by other risk factors (smoking, alcoholism, achalasia, etc.) has not been studied separately in patients after aHCT and needs to be explored further.

Large population-based cancer registry studies from Japan did not show a difference in survival between patients with de novo esophageal ca versus esophageal ca after aHCT (7,25). The EBMT study by Tichelli and colleagues showed however, that there was a significant decrease in expected mortality in esophageal cancer patients after aHCT when compared to patients from the general population (SMR 0.49; 95% CI: 0.33–0.68) (26). Despite being poly-treated for primary malignancy with chemotherapy and aHCT, the survival of patients with esophageal ca after aHCT seems comparable (if not better) to that of the general population. One possible explanation for the same may be that most centers across the world, including our own, mandate annual visits to a dentist, and with a transplant physician focused on looking for long-term complications after HCT. These visits facilitate timely reporting of symptoms and may trigger a diagnosis of secondary malignancies including esophageal cancer in their early stages, thus leading to aggressive treatments and favorable outcomes.

Our study is limited by a small heterogenous cohort of patients with esophageal cancer evaluated over a long period of time, increasing the possibility of patients who were lost to follow-up, and subsequently developed esophageal cancer. A significant proportion of patients undergoing aHCT may die due to transplant related causes and may not live long enough to develop secondary cancers (including esophageal). Thus the incidence rates may be underestimated figures, despite being higher than the general population.

In conclusion, there is an increased risk of developing esophageal cancer after aHCT, especially in patients with chronic oropharyngeal GVHD. The prognosis of patients with esophageal GVHD may be comparable to that of the general population. Our data shows that aggressive treatment regimens are tolerated by patients after aHCT especially with diagnosis in the early stages of the disease. With existing data suggesting a continuing increase in the risk of developing these malignancies after aHCT, there is a need for life-long follow-up and surveillance of these patients. Although there is no evidence for routine/surveillance endoscopy after aHCT, patients presenting with symptoms of non-cardiac central chest pain, dysphagia, odynophagia or unexplained weight loss, should be evaluated thoroughly with barium swallow and upper gastrointestinal endoscopy. This will also facilitate early diagnosis of other common esophageal pathologies after aHCT including ulceration, webs and scleroderma-like dysmotility syndromes. Early diagnosis and treatment in the early stages of disease, improves the outcomes of therapy in esophageal cancer after aHCT.

We would like to acknowledge the contribution of the Allogeneic BMT data coordinators, especially Ms. Carol Chen for the accurate documentation of BMT data.

Reporting Checklist: The authors have completed the STROBE reporting checklist. Available at https://jgo.amegroups.com/article/view/10.21037/jgo-22-700/rc

Ethical Statement: The authors are accountable for all aspects of the work in ensuring that questions related to the accuracy or integrity of any part of the work are appropriately investigated and resolved. The study was conducted in accordance with the Declaration of Helsinki (as revised in 2013). The study was approved by Institutional ethics board of University Health Network, Toronto, Canada) and individual consent for this retrospective analysis was waived.