Pancreatic adenocarcinoma (PC) is a lethal malignancy: predictions expect 60,430 new diagnoses of the disease in 2021 with 48,220 estimated deaths, and only 10% of patients are expected to live up until the 5-year mark (1). By 2030, PC is on track to be the second cause of malignancy-related deaths in the US (2). This disease does not impact all patients equally, as healthcare outcomes for patients with PC vary by race and ethnicity as well as socioeconomic factors.

Disparities in PC have been documented by race (3-5), age (6), sex (6), income (7,8), insurance (7,8), and location (9-11). More specifically, inequities exist in how patients are cared for and treated during the early stages of the disease. For example, it is known that Black and uninsured patients have lower rates of curative intent surgery (3,4,12-14). Additionally, Black patients and racial minorities are less likely to receive adjuvant chemotherapy (13,15-16). However, it is not fully understood what impact social determinants of health (SDH), such as income, education, race, and insurance status, have on the diagnosis of PC and survival of patients with Stage IV disease, for which no curative treatments exist. Moreover, one of the limitations of some previous studies is the lack of inclusion of education as a predictive factor (8,17,18). Given that some social risk characteristics are modifiable, the study of SDH could improve the early diagnosis rate and survival of patients with pancreatic cancer.

For this reason, our study aims to evaluate if health inequities in patients with PC are more prominent before or after the diagnosis of advanced disease. We hypothesize that SDH, such as income, education, race, and insurance status, are (I) associated with stage of diagnosis of PC (Stage IV vs. other stages) and (II) associated with overall survival (OS) in Stage IV patients.

In our study, we sought to answer two key questions. First, what factors are associated with late-stage (Stage IV) PC diagnoses? Specifically, are a patient’s race, insurance status, neighborhood income level, and/or neighborhood education level associated with late-stage diagnoses? Second, among those diagnosed with Stage IV PC, are these factors associated with survival? We present the following article in accordance with the STROBE reporting checklist (available at https://jgo.amegroups.com/article/view/10.21037/jgo-21-788/rc).

The National Cancer Database (NCDB) was queried for this retrospective observational cohort study. The NCDB encompasses 70% of hospital-based cancers diagnosed in the US. NCDB data is deidentified. Eligibility included patients 18 years and older newly diagnosed with PC in the US between January 1, 2004 to December 31, 2016. We excluded cases with more than one cancer diagnosis and cases in which the treatment was administered at a facility different from the reporting one, as this might create bias. A complete case analysis method was used for handling missing data. Cases with missing data on predictors, outcomes, and confounders were eliminated (Figure S1). 230,877 cases were selected for the final analysis. The editions 6th and 7th of the American Joint Commission on Cancer (AJCC) editions were used, depending on year of diagnosis. AJCC analytic stage group is a variable in NCDB. It is assigned the value of the pathologic stage. Clinical stage is used if pathologic information was not available. The study was conducted in accordance with the Declaration of Helsinki (as revised in 2013).

Multivariable models were adjusted for age, sex, and Charlson-Deyo comorbidity score. Age was included in the analysis in ordinal categories by deciles. Sex was included as a binary variable, male vs. female. The Charlson-Deyo comorbidity index is calculated from diagnosis codes, applying weight for type of comorbidity, then summed for a score from 0 to 25. Values were then collapsed into four categories: a score of 0, 1, 2, or greater than 3, with higher score representing more comorbidity.

Baseline characteristics for our cohort were first summarized by early vs. late-stage (Stage 0-III vs. Stage IV). A univariate logistic regression analysis was done to analyze the impact of each variable on a diagnosis of Stage IV PC (vs. Stages 0-III). We adjusted a multivariable logistic regression model for age, sex, Charlson comorbidity index (CCI), race, insurance, income, and education. A description of the models can be found in Table S1. Finally, we did univariate and multivariable Cox proportional hazard regression models to analyze predictors associated with survival of patients with Stage IV PC. Kaplan-Meier curves were generated to illustrate differences in survival times between the categories of each of the four social determinants. Statistical analyses were done with Stata IC/SE version 16 (College Station, TX, USA). Significance was defined by P≤0.05.

We repeated the multivariable Cox proportional hazard regression model to document predictors associated with survival of PC patients of all stages.

Demographic characteristics of patients with a diagnosis of pancreatic cancer

Univariate and multivariable analysis, odds of being diagnosed with Stage IV pancreatic cancer (vs. Stages 0–III) 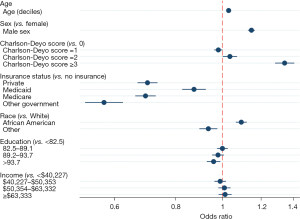 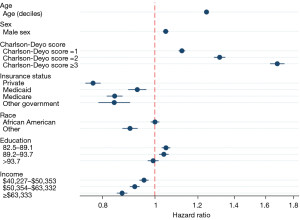 In a sensitivity analysis, we evaluated the association of SDHs in the survival of patients with any stage of PC. Education, income, and insurance were associated with improved survival. Race was not significantly associated with survival (Table S2).

Our study showed that patients diagnosed with Stage IV PC were more likely to have lower education levels, be without insurance and be Black. Once diagnosed with metastatic disease, patients without insurance and those living in lower-income neighborhoods had shorter survival. Race and education did not have a significant impact on survival for those with Stage IV PC. These findings suggest that disparities in rates of late-stage diagnosis differ meaningfully from disparities in cancer survival. The absence of insurance was the most important factor along the continuum of PC care, from diagnosis to treatment.

To our knowledge, this is the first study to show that education is an impactful factor in earlier diagnosis of PC. It is possible that more educated patients readily recognize concerning symptoms of PC such as weight loss, early satiety, and abdominal pain. These findings put an onus on public health policymakers to evaluate education tools in the community and develop strategies for disseminating knowledge about pancreatic malignancy signs and symptoms. Alternatively, higher education may be a surrogate for access to resources which facilitate follow-up on symptoms, risk factors or family history. While education was associated with early diagnosis, there were no differences in survival according to education for patients with metastatic disease. This suggests that despite the importance of any knowledge about the condition, once the disease is incurable, survival outcomes are superseded by other factors and resources, such as insurance and income.

Prior studies have shown that race is an independent predictor of a late diagnosis of PC and poor survival in all stages (20-24). In these studies, the survival differences by race were driven largely by differences in surgery and treatment rates in early stage or potentially curative disease settings (3,4,12,25). However, our analyses were instead focused on those with metastatic disease, eliminating the administration of curative intent treatments as mediators. Our study demonstrates that there is no impact of race on survival in the metastatic disease setting, suggesting that the racial disparities in PC survival in prior studies may be partially due to treatment differences and access to care in early and potentially curative stages. Race was also not associated with differences in survival in a study done in an integrated healthcare system, when patients with PC had equal access to curative intent and palliative interventions (26).

Finally, the present study's finding that uninsured patients are most likely to have stage IV at diagnosis and have worse survival is compatible with results by other investigators (7,15,27). Some studies have shown that improving insurance coverage can mitigate disparities in PC treatment, at least at the state level, as this can increase access to curative treatment (28). Our research builds upon prior research by demonstrating the importance of insurance coverage for those with late-stage PC across the care continuum, from initial diagnosis to treatment.

The current study results demonstrated that poor education, Black race, and being uninsured are predictors of a late diagnosis of PC. Once diagnosed and being treated with palliative goals, the two most important socioeconomic predictors of survival are income and insurance. Given that PC is expected to be the second cause of cancer-associated deaths by the end of this decade, these findings have important implications for public health policy. Our study suggests that education is an important factor at diagnosis. This is an argument in favor of community-level educational interventions. It shines a light on the importance of disseminating knowledge about symptoms of PC. For example, a person can easily dismiss abdominal pain, depending on the degree or chronicity. Similarly, new onset adult diabetes can also herald an underlying pancreatic pathology. Perhaps if we emphasized these points, patients and caregivers might be more empowered to seek attention sooner.

Regardless of education and empowerment, our study demonstrated that insurance coverage is the most important factor in the diagnosis and survival of patients with PC, suggesting the importance of expanding access to care through regional or national health policies. Reducing disparities in cancer care will require the collective effort of many key stakeholders, including policymakers, public health officials, and healthcare providers.

Our study has several limitations. First, though the dataset was from accredited CoC institutions, there is the risk of misclassification bias when using the dataset from the NCDB. Furthermore, because the NCDB is a hospital-based database, the generalizability of the study may be limited and subject to some degree due to regionalization and by selection bias whereby patients needed to access a hospital in order to be captured by the NCDB. While this may introduce some limitations in our patient sample, it is unlikely to influence our results substantially, as the NCDB includes 70% of the US’s hospital-based cancer population with representation by all states and Puerto Rico. Second, some of the variables, such as income and education, do not represent granular data. Instead, they are ecologic variables, assigned according to the patient’s primary residence zip code, matched to the American Community Survey. Although this precludes the assignment of individual causation, it gives us an approximate idea of the importance of the different socioeconomic factors. Third, when analyzing race, there is some residual confounding in the analysis of patients of Black race. For example, some of the Black patients included in this study were of Hispanic descent, and others were not. Hispanics have a heterogeneous ancestry, including Indigenous, Caucasian, and African ancestry. Since other studies have evaluated this ethnic group (24,29), we chose to focus on the differences between Black vs. White patients irrespective of ethnicity, as we believe this would partially eliminate biases from heterogeneous ancestry. We acknowledge this is not the generally accepted standard evaluation of race/ethnicity and that even black ancestry has significant heterogeneity. Fourth, to handle missing variables, we used complete case analysis under the assumption that variables were missing at random. While this may not be an accurate assumption, complete case analysis is an accepted statistical technique to handle missing data.

The late diagnosis of PC is a death sentence for most patients with an increasing burden on the healthcare system and communities. Our study adds to the collective body of knowledge relating key SDH that impact the continuum of care for patients with advanced pancreatic cancer, including stage at diagnosis and overall survival.

Reporting Checklist: The authors have completed the STROBE reporting checklist. Available at https://jgo.amegroups.com/article/view/10.21037/jgo-21-788/rc

Ethical Statement: The authors are accountable for all aspects of the work in ensuring that questions related to the accuracy or integrity of any part of the work are appropriately investigated and resolved. The study was conducted in accordance with the Declaration of Helsinki (as revised in 2013). The NCDB file was provided to the authors for analytical purposes and was exempt from institutional review board review.