The Wnt/β-catenin signaling pathway plays an essential role in cancer progression through initiating cell proliferation, migration, invasion, metastasis, stemness, and drug resistance (6,7). Activation of the Wnt/β-catenin pathway occurs in various tumors, including those of liver and intestinal cell origin (8,9). β-catenin is the core component of this pathway, and the multiprotein β-catenin degradation complex tightly controls its accumulation and nuclear translocation. Cytoplasmic β-catenin is phosphorylated by 2 Ser/Thr kinases, namely glycogen synthase kinase 3 (GSK-3) and casein kinase 1 (CK1), and is then recognized by ubiquitin ligase β-transducin repeat-containing protein (β-TrCP), which mediates β-catenin proteasomal degradation (10). Disruption of the degradation complex can prevent β-catenin degradation, resulting in accumulated β-catenin translocating to the nucleus. β-catenin, which is located in the nucleus, interacts with transcription factors of the lymphoid enhancer factor/T-cell factor (LEF/TCF) family and initiates the transcription of several protooncogenes, such as c-Myc and cyclin D1 (8,9,11). Accumulating evidence has demonstrated that aberrant activation of Wnt/β-catenin contributes to sorafenib resistance, and inhibition of Wnt/β-catenin eliminates sorafenib resistance and enhances sorafenib sensitivity (12-14). For this reason, identiﬁcation of the regulator of Wnt/β-catenin involved in sorafenib resistance and targeting this regulator will be useful for improving the clinical outcome of sorafenib treatment.

Obg-like ATPase 1 (OLA1), an identified member of the Obg family and the YchF subfamily of p-loop GTPases, is affiliated with the translation-factor-related (TRAFAC) class and is highly conserved from bacteria to humans (15,16). P-loop GTPases are involved in monitoring various cellular processes, such as intracellular transport, signal transduction, protein translation, stress responses, and cell proliferation (17-20). OLA1 also works as an intrinsic stress response regulator, including oxidative stress (21) and heat shock (22,23). OLA1 was shown to be highly expressed in most cancers, lowly expressed under DNA damage, and reduces doxorubicin sensitivity in colon cancer cells (24). More evidence showed that reduction of OLA1 suppressed breast cancer cell migration and invasion, and was involved in epithelial-mesenchymal transition (EMT) in different tumor cells (25,26). OLA1 could be a potential biomarker of endometrial cancer (27). A recent study showed that OLA1 was also overexpressed in HCC and OLA1 promoted HCC development (28). However, there is no study showing whether OLA1 is related to HCC sorafenib resistance. A previous study reported that OLA1 can bind to GSK-3β and phosphorylate GSK-3β at Ser9, which is an inactivate form, failing to phosphorylate β-catenin and resulting in β-catenin accumulation (26). Previous works showed that β-catenin activation contributed to chemoresistance and inhibition of β-catenin signaling enhanced by sorafenib sensitivity (29,30). The phosphorylation of β-catenin at Thr41, Ser37, and Ser33 by GSK-3β was reported to promote β-catenin degradation, prevent β-catenin nuclear translocation, and inhibit β-catenin transactivation (31). OLA1 phosphorylated GSK-3β at Ser9 and blocked its activation (26,32). Evidence also showed that GSK-3β/β-catenin contributed to sorafenib resistance, blocking GSK-3β/β-catenin signaling to overcome sorafenib resistance and enhance sorafenib sensitivity (10,33). Therefore, we hypothesized that OLA1 may contribute to sorafenib resistance in HCC by activation of GSK-3β/β-catenin signaling.

In the current work, we showed that OLA1 was positively correlated with sorafenib resistance by activating the GSK-3β/β-catenin signaling pathway in HCC. Our data suggests that targeting OLA1 can improve the sensitivity of sorafenib in HCC. We present the following article in accordance with the MDAR reporting checklist (available at https://jgo.amegroups.com/article/view/10.21037/jgo-22-458/rc).

The survival rates of HCC patients who received sorafenib treatment were analyzed by Kaplan-Meier plotter (https://kmplot.com/analysis/index.php?p=service&cancer=liver_rnaseq) (34). OLA1 low or high expression group was divided by the best separation of survival.

HCC cells Huh7 and HCCLM3, along with HEK293T cells, were obtained from the Cell Bank of Type Culture Collection of the Chinese Academy of Sciences (Shanghai, China), and maintained in Dulbecco’s Modified Eagle Medium (DMEM) (Hyclone, Cat#SH30243.01) supplemented with 10% fetal bovine serum (Hyclone, Cat#SV30087.03) and 1% penicillin-streptomycin (MCE; Cat#HY-K1006) at 37 ℃ with 5% CO2.

Two specific sequences targeting OLA1 were inserted into the pLKO.1 vector to generate OLA1 short hairpin RNA (shRNA) plasmids: shOLA1-1, 5'-GCCTTGGAACTCAAGTTGCAA-3'; shOLA1-2, 5'-CCAGATGAAAGGTTTGACTTT-3'. The lentivirus constructs and packaged plasmids (pMDL, VSV-G, and REV) were transfected into HEK293T cells to produce lentivirus using HighGene Transfection reagent (Abclonal; Cat#RM09014) according to the manufacturer’s instructions. At 48–72 h after transfection, lentiviruses were collected and then contaminating cells were removed by centrifugation for 30 min at 2,500 rpm. Huh7 and HCCLM3 cells were transfected with the virus plus 10 µg/mL of polybrene (MCE; Cat#HY-112735). Stable OLA1-knockdown cell lines were selected by puromycin (1 µg/mL). WB was used to confirm the knockdown efficiency.

Cell viability was measured by the CCK-8 assay. Briefly, 5,000 control and OLA1 knockdown Huh7 and HCCLM3 cells were seeded into 96-well plates overnight, then the medium was changed with or without sorafenib (10 µM). After 24 h incubation, CCK-8 (10 µL) solution was added into each well and maintained for 1 h. Optical density (OD) values were measured at 450 nm wavelength.

A total of 500 control and OLA1 knockdown Huh7 and HCCLM3 cells were seeded into 6-well plates overnight, and the medium was changed with or without sorafenib (10 µM) lasting for 2 weeks. The sorafenib incubation medium was renewed every other day. At the end of treatment, 0.1% crystal violet was used to stain the cells, and then the cell numbers were counted.

OLA1 was positively correlated with clinical sorafenib resistance in HCC

Owing to the serious side effects, the use of sorafenib to treat HCC has been limited. Previous work reported that OLA1 was overexpressed and promoted tumorigenesis in HCC (28). To clarify whether OLA1 contributes to sorafenib resistance in HCC, we analyzed the survival of HCC patients treated with sorafenib according to different expression profiles of OLA1 in a public database (https://kmplot.com/analysis/index.php?p=service&cancer=liver_rnaseq) (35). The survival plot exhibited that patients who expressed high levels of OLA1 had a shorter overall survival (OS) (Figure 1A), recurrence-free survival (RFS) (Figure 1B), and disease-specific survival (DSS) (Figure 1C) than those who expressed low levels of OLA1. These results indicated that OLA1 may promote sorafenib resistance in HCC.

To evaluate the effects of OLA1 on sorafenib treated HCC cells, OLA1 knockdown Huh7 and HCCLM3 HCC cell lines were established and then stimulated with sorafenib (10 µM) for 24 h. Cell viabilities were detected by the CCK-8 assay. As shown in Figure 2A,2B, OLA1 knockdown enhanced HCC cancer cell proliferation inhibition induced by sorafenib in Huh7 (Figure 2A) and HCCLM3 cells (Figure 2B). In addition, the clone formation abilities were analyzed by the clone formation assay. The results showed that OLA1 knockdown cells formed markedly fewer clones compared with control cells both with or without sorafenib treatment in Huh7 (Figure 2C) and HCCLM3 cells (Figure 2D). These results suggested that reduction of OLA1 augmented HCC cell proliferation inhibition induced by sorafenib. 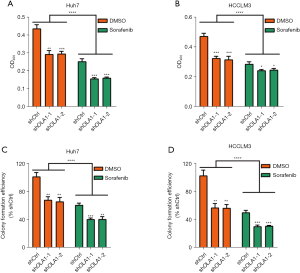 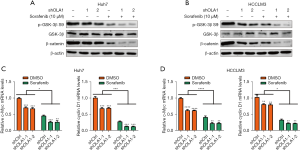 Accumulating reports have shown that OLA1 is highly expressed in most cancers, such as HCC and breast cancer (28,38,39). Given the essential functions of OLA1 in stress responses, it is reasonable to suggest that OLA1 may be a potential therapeutic target for cancer. A key hallmark of cancer cells is the de novo or acquired resistance to diverse stresses such as drug treatment, heat shock, and hypoxia (21,22,38). HIF1α activation-induced by hypoxic conditions contributed sorafenib resistance in HCC, inhibition of HIF1α attenuated sorafenib resistance (40,41). Liu et al. (42) reported that OLA1 induced HIF1α activation in colorectal cancer. So HIF1α activation may also involve in OLA1-induced sorafenib resistance. To evaluate the functional role of OLA1 in sorafenib resistance, we determined the impact of loss-of-function of OLA1 on sorafenib-induced cell proliferation inhibition and cell death. Our data indicated that knockdown of OLA1 enhanced sorafenib sensitivity in HCC, with increased cell proliferation inhibition and cell death. Previous studies have shown that OLA1 mediates the phosphorylation of GSK-3β at Ser9 (26,32,43). β-catenin is phosphorylated by GSK-3β at Ser33, Ser37, and Thr41 (31), and then the phosphorylated β-catenin is specifically recognized by E3 ubiquitin ligase β-TrCP and broken down by the proteasome system (44,45). In the present work, we discovered that sorafenib reduced the phosphorylation of GSK-3β at Ser9 in both Huh7 and HCCLM3 HCC cells. Concurrently, we also observed a decrease of β-catenin, thus preventing β-catenin nuclear translocation, where it is involved in LEF/TCF mediated transcription (8). c-Myc and Cyclin D1, which are the major targets of β-catenin, were also reduced in OLA1 knockdown cells. OLA1 knockdown could enhance the changes induced by sorafenib, indicating that OLA1 is involved in sorafenib resistance through GSK-3β/β-catenin signaling.

Reporting Checklist: The authors have completed the MDAR reporting checklist. Available at https://jgo.amegroups.com/article/view/10.21037/jgo-22-458/rc

Conflicts of Interest: All authors have completed the ICMJE uniform disclosure form (available at https://jgo.amegroups.com/article/view/10.21037/jgo-22-458/coif). The authors have no conflicts of interest to declare.