Discovered in 2012, ferroptosis is an iron-dependent form of nonapoptotic-mediated cell death (1,2). Studies have shown that ferroptosis differs from other well-known forms of cell death, such as apoptosis, necrosis, and autophagy, in terms of morphology, biochemistry, and genetics (3-5). Unlike apoptosis, ferroptosis is induced by the deficiency of glutathione (GSH) or the inactivation of glutathione peroxidase 4 (GPX4) function (6,7). In addition, during ferroptosis, unique changes in mitochondrial morphology occur, mainly the loss of structural integrity, which manifests, for instance, in smaller than normal mitochondria, condensation of mitochondrial membrane density, reduction or disappearance of mitochondrial cristae (8), and the rupture of the outer mitochondrial membrane (9). Ferroptosis is hypothesized to be caused by an excessive iron-dependent accumulation of lipid peroxidation products. Therefore, small-molecule lipophilic antioxidants and iron chelators may be able to prevent ferroptotic cell death, a role that the other types of cell death inhibitors outlined above cannot perform. Erastin, a ferroptosis inducer, was found to improve the efficacy of a few chemotherapeutic drugs for breast cancer and brain cancer, such as temozolomide, cisplatin, cytarabine/ARA-C, and doxorubicin/adriamycin (10-12). These findings show that activating ferroptosis in cancer patients may be a unique approach in treatment. Additionally, a number of US Food and Drug Administration (FDA)-approved therapeutic drugs, including sorafenib and sulfapyridine, have been shown to elicit ferroptosis in a variety of cancer cells, demonstrating the feasibility of ferroptosis in preclinical and clinical settings.

Gastric cancer (GC) is one of the most common types of cancer in the world, ranking fifth in terms of incidence and fourth in terms of fatality in 2020. Furthermore, GC has the greatest incidence of gastrointestinal cancers, with high cancer-related mortality rates being reported in east Asia, including China (13-15). The prognosis for individuals with GC has improved significantly over the last few decades as a result of comprehensive treatment that includes curative surgery, chemoradiotherapy, targeted therapy, and immunotherapy. However, the majority of patients are detected at an advanced stage, with a 5-year overall survival rate of less than 40% (15-17). Regarding GC therapy, a previous study has established the critical role of ferroptosis in the treatment and prognosis of GC, which includes the facilitation of perilipin 2 in regulating the proliferation and apoptosis of gastric carcinoma cells through intervening in the ferroptosis pathway (18). Moreover, little literatures explored the relationship between ferroptosis and GC. Therefore, it is urgent to investigate the underlying effect of ferroptosis on GC and the promising value on cancer therapy.

ADP ribosylation factor 6 (ARF6) belongs to the Rat sarcoma virus (RAS) superfamily and encodes small guanine nucleotide-binding proteins (GTP-binding protein). ARF6 is involved in a variety of cellular processes, including autophagy support, lipid-modifying enzyme activation, increase of actin polymerization, and innate immunity (13). Additionally, ARF6 has been shown to influence cancer cell invasion, metastasis, and proliferation (14). Notably, ARF6 has been found to direct downstream transport and recycling of cargo following clathrin-mediated and clathrin-independent endocytosis (15,16). These results suggest that ARF6 may play a variety of roles in cell physiology by regulating the breakdown and recycling of a diversity of functional proteins. One study indicated that the Kirsten rat sarcoma viral oncogene (Kras)/extracellular signal-regulated kinases (ERK) pathway might stimulate ARF6, resulting in the formation of a positive feedback loop between ARF6 and c-myc, which in turn could promote GC proliferation and induce the Warburg effect (17). According to a recent study, c-myc may prevent ferroptosis via modulating the expression of lipid metabolic genes (18). If Kras and c-myc both regulate ferroptosis, it is critical to determine whether ARF6, the protein that connects Kras and c-myc, regulates ferroptosis and what effect this regulation has on the development of GC.

In this study, we investigated the potential impact of ARF6 on ferroptosis in GC cells. We found that ARF6 did not directly regulate the generation of lipid peroxidation, but did affect the sensitivity of erastin-induced ferroptosis. Further results revealed that ARF6 aggravated capecitabine by inhibiting ferroptosis and capecitabine-related metabolic proteins, DCK and hENT1. We present the following article in accordance with the MDAR reporting checklist (available at https://jgo.amegroups.com/article/view/10.21037/jgo-22-341/rc).

The study was conducted in accordance with the Declaration of Helsinki (as revised in 2013). The study was approved by Ethics Committee of Shengjing Hospital of China Medical University (No. JC20200935) and informed consent was taken from all the patients.

BODIPYTM 581/591 C11 was used to detect lipid peroxidation (D3861; Thermo Fisher Scientific, Waltham, MA, USA). In brief, cells were trypsinized and then resuspended in 400 µL of serum-free medium with BODIPYTM 581/591 C11 (2 µM). Following this, cells were incubated at 37 ℃ for 30 minutes in a cell culture incubator. The samples were subsequently analyzed using a flow cytometer, with the data being gathered from the FL1 channel. A minimum of 10,000 cells were evaluated for each condition. Additionally, BODIPYTM 581/591 C11 (2 µM) was incubated directly in adherent cultivated cells for 30 minutes at 37 ℃, and the fluorescence was detected using confocal microscopy.

Clinical tissue samples were gathered with from patients diagnosed with GC at Shengjing Hospital of China Medical University. Antibodies against ARF6 and ACSL4 were used to stain paraffin-embedded tissues using normal IHC methods. Anti-ACSL4 (ab155282; Abcam) and anti-ARF6 (ab77581; Abcam) antibodies were employed at a 1:100 dilution factor. Positive proportion and intensity were quantified semiquantitatively in a manner described previously (20).

Because lipid peroxidation is a critical part of ferroptosis, we measured the quantity of MDA, which is a product of lipid peroxidation. Intriguingly, silencing ARF6 had no effect on the MDA level in either the BGC-823 or MGC80-3 cell lines, but this did increase the level of erastin-induced MDA (Figure 2A,2B). Following this, we tested a fluorescent probe to identify the oxidized lipids directly. When this probe attaches to oxidized lipids, the fluorescence appears green. Confocal scanning imaging confirmed that erastin increased the amount of oxidized lipids in ARF6-knockdown cells (Figure 2C). 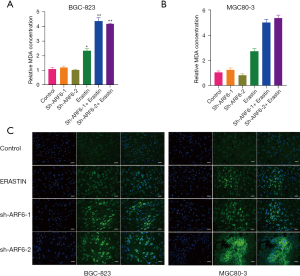 ARF6 regulated the lipid peroxidation sensitivity to erastin via GPX4

Since erastin directly targets GPX4 and our findings suggest that ARF6 has an effect on the severity of lipid peroxidation produced by erastin, we then examined whether ARF6 is involved in the regulation of GPX4 expression. The results showed that the level of GPX4 protein was increased in ARF6-knockdown cells (Figure 3A). Moreover, after erastin stimulation, ARF6-knockdown cells exhibited a significant increase in GPX4 messenger RNA (mRNA) (Figure 3B). We then aimed to determine whether ARF6 has an effect on erastin sensitivity via the inhibition of ACSL4. The subsequent experiments demonstrated that the knockdown of ARF6 significantly reduced the downregulation of GSH after erastin stimulation (Figure 3C). Furthermore, cells in which ARF6 was knocked down showed lower elevation of reactive oxygen species (ROS) after erastin stimulation (Figure 3D). GSH, ROS, and lipid peroxidation are significant markers of ferroptosis, and our experiments soundly confirmed that knockdown of ARF6 reduced the extent to which erastin induced ferroptosis in the GC cell lines. 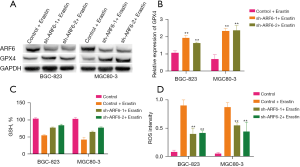 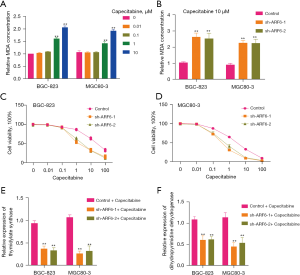 ARF6 and GPX4 expression was negatively correlated in patients with GC

Ras superfamily members are required for normal cellular function, and their mutations or aberrant activation promotes cancer formation (22,23). On the basis of sequence identity and function, the Ras superfamily can be separated into 5 distinct families: Ras, Rho, Rab, Arf, and Ran (24). RAS (KRAS, HRAS, NRAS) is the most frequently mutated oncogene in human cancer, occurring most frequently in gastric, colon, and lung malignancies. Furthermore, RAS mutations are associated with a poor prognosis and resistance to therapy, while there are currently no effective medicines for tumors that express mutant versions of the RAS oncoprotein (25). As a result, it is critical to identify chemicals that are specifically deleterious to RAS-mutant tumor cells. To this end, researchers examined tens of thousands of chemicals in order to identify those that were capable of killing RAS mutant cancer cells. Those that were eventually discovered as suitable (including erastin) were dubbed RAS-selective lethal (RSL) compounds, and their underlying mechanisms were described in further detail. Additionally, the researchers discovered that these chemicals destroyed cells in a novel, iron-dependent manner that was distinct from apoptosis (3,4). This type of cell death was further described in 2012, characterized by iron dependency and lipid peroxidation, and consequently named ferroptosis (26). Erastin is one of the classic inducers of ferroptosis, as it inhibits the Na+-independent cystine/glutamate antiporter (system xc−) and specifically targets GPX4 (27).

ARF6, one of several members of the integrin superfamily, has a significant and intricate effect on cells. However, the link between ARF6 and ferroptosis is not well understood. We discovered that ARF6 suppressed sensitized erastin-induced ferroptosis; although the process through which this occurs remains unclear. It is possible that in GC, an active trans-sulfuration mechanism is present that can counteract the erastin-induced cystine shortage (28). However, additional research is required to verify this. We then demonstrated that silencing ARF6 had no effect on the degree of lipid peroxidation, which is the primary hallmark of ferroptosis. Surprisingly, ARF6 suppressed erastin-induced peroxidation. Further investigation indicated that silencing ARF6 increased the level of GPX4 protein and mRNA. These results suggest that ARF6 may be able to regulate GPX4 at the posttranslational stage. ACSL4 has been shown to control the sensitivity of erastin- or GPX4-depleted ferroptosis by modifying the cellular lipid composition to one that can be easily oxidized.

Ferroptosis offers a wide range of clinical applications. For example, it has been demonstrated that drug-resistant cancer cells are susceptible to ferroptosis (29). One study has been conducted in this area with the goal of employing nanomaterials as drug carriers to deliver ferroptosis inducers to cancer cells in vivo (30). Additionally, blocking or activating ferroptosis has been found capable of altering cisplatin sensitivity (31). We thus searched for a link between ARF6-regulated ferroptosis and capecitabine. We discovered that silencing ARF6 increased capecitabine sensitivity in GC, although this impact was not entirely due to ferroptosis activation. The capecitabine-related metabolic proteins, TS and DPD, may also be involved in this process, as ARF6 silencing was also found to increase the TS and DPD mRNA levels.

Some limitations to this study should be noted. First, our study did not specifically examine how ARF6 regulates GPX4. One previous report indicates that ARF6 is localized to the plasma membrane and vesicle membrane in the cytoplasm, where it functions in the internalization of ligands and recycling endosomes, the regulation of endocytic membrane trafficking and actin remodeling, the promotion of autophagy, and other processes (32). Since GPX4 was enriched in plasma membrane, we guessed that ARF6 silenced might inhibit the degradation by decreasing the transport to lysosome, for ARF6 has been reported to determine the destination of the cargo in endosome: to be recycled or to be degraded by lysosome (13).

In conclusion, this study establishes a role for ARF6 in erastin-induced ferroptosis and capecitabine-resistant GC cells and provides a preliminary understanding of the underlying mechanism.

Reporting Checklist: The authors have completed the MDAR reporting checklist. Available at https://jgo.amegroups.com/article/view/10.21037/jgo-22-341/rc

Conflicts of Interest: Both authors have completed the ICMJE uniform disclosure form (available at https://jgo.amegroups.com/article/view/10.21037/jgo-22-341/coif). The authors have no conflicts of interest to declare.

Ethical Statement: The authors are accountable for all aspects of the work in ensuring that questions related to the accuracy or integrity of any part of the work are appropriately investigated and resolved. The study was conducted in accordance with the Declaration of Helsinki (as revised in 2013). The experimental protocols were approved by the Ethics Committee of Shengjing Hospital of China Medical University (No. JC20200935). All participants have acknowledged and signed consent for gastric cancer biopsy usage in this study.