Effectiveness of telerehabilitation on short-term quality of life of patients after esophageal cancer surgery during COVID-19: a single-center, randomized, controlled study

Esophageal cancer is the sixth leading cause of cancer death globally (1). While the primary curative treatment for patients is surgical resection of the esophagus (2), the occurrence of postoperative complications may lead to a delayed postoperative recovery and an obvious decline in physical function in the first 3 months after surgery (3). Esophagectomy patients often complain of fatigue, appetite loss, sleep disturbance, trouble with swallowing saliva, and choking, which may result from altered cardiopulmonary function, generalized muscle weakness, and malnutrition (4). Multiple prior studies have demonstrated that better postoperative rehabilitation was associated with reduced postoperative complications and improved the quality of life (QOL) for patients after esophageal cancer surgery (4-6). Traditionally, patients receive face-to-face rehabilitation training, especially during the first three months after surgery. Unfortunately, the outbreak of COVID-19 posed physical and emotional obstacles for patients returning to hospitals after surgery, which sometimes made face-to-face rehabilitation consulting and training impossible.

To investigate the effectiveness of telerehabilitation consulting and training, a cohort of 86 patients who received minimally invasive esophagectomy between September 2020 and January 2021 was randomly divided into two groups. One group received common consulting whenever they returned to the thoracic surgery clinic, and the other received regular telerehabilitation consulting and training. Herein, we report our observations in this cohort. We present the following article in accordance with the CONSORT reporting checklist (available at https://dx.doi.org/10.21037/jgo-21-385).

A cohort of 86 patients who received minimally invasive esophagectomy for pathologically diagnosed esophageal cancer between September 2020 and January 2021 were recruited from the surgical wards of the Department of Thoracic Surgery, Fujian Medical University Union Hospital. The inclusion criteria were: age ranging from 18 years old to 75 years old; patients who had undergone minimally invasive esophagectomy; patients who were discharged within 30 days of surgery; the estimated survival time was over 90 days. Exclusion criteria for both telerehabilitation and control groups included a diagnosis of severe cardiopulmonary diseases before surgery, a diagnosis of severe postoperative complications such as postoperative chylothorax or anastomotic fistula, a need for professional medical equipment which was provided only at hospital, or refusal to participate in follow-up assessments. Eventually, 80 patients who received minimally invasive esophagectomy agreed to participate and signed written informed consents. The trial design type was two-parallel and a method of simple randomization was applied. Briefly, a series of random numbers were generated using the SPSS Software and assigned into two groups in a 1:1 ratio ahead of the first patient’s admission in the study. The two groups were: (I) a telerehabilitation group who received additional telerehabilitation consulting and training; (II) a control group receiving standard consultation whenever they returned to the thoracic surgery clinic. Subsequently, patients who agreed to participate in the study were received a random number and assigned into the two groups at discharge. The following-up telerehabilitation intervention and clinical assessments were performed by different groups of researchers (Study flowchart in Figure S1). The study protocol was approved by the ethics committees of Fujian Medical University Union Hospital (No.: 2020KY0160). The study was conducted in accordance with the Declaration of Helsinki (as revised in 2013) and was registered on the Chinese Clinical Trial Registry (ChiCTR21000049186). The full trial protocol can be accessed on the Chinese Clinical Trial Registry website (https://www.chictr.org.cn/).

Telerehabilitation intervention was provided by a medical care group which included the head of the nursing department in thoracic surgery, at least one doctor who participated in the surgery, and three experienced nurses. Participants in the telerehabilitation group received a 3-month home-based telerehabilitation intervention after discharge, and a WeChat group including the medical care group, the patient, and the patient’s family was created at discharge. The telerehabilitation intervention included the following: (I) precautions for nutritional support; (II) swallowing function training; (III) respiratory function training; (IV) guidance and feedback on matters such as patient’s current vital signs, wound status, medication, and sleep status. The intervention was delivered using daily small tips, training videos, and regular online consulting. Patients, accompany by their care givers, were asked to receive training on schedule. The attendance rate on regular online consulting was also be followed.

The European Organization for Research and Treatment of Cancer Quality of Life (QOL) Questionnaire Core 30 (EORTC QLQ-C30) scale (version 3.0) (11), which contains scales and items addressing functional aspects of QOL and symptoms that commonly occur in patients with cancer, and its esophageal cancer supplementary scale EORTC QLQ-OES18 (12) were used for the assessments of QOL. Assessments were performed face-to-face at discharge and at 3 months post-operation by another group of trained researchers. Scores were calculated to the 100-point system in accordance with instructions in the EORTC QLQ-C30 scoring manual (13). The primary outcome was measured by the score changes at three months post-operation compared to the baseline at discharge.

Statistical analyses were performed using SPSS version 25.0 (SPSS Inc., Chicago, IL, USA). Quantitative measures were summarized with descriptive statistics, such as mean and SD, and categorical data were expressed as n (%). Chi-square tests were performed to determine if the two groups had the same distribution. The student’s t-tests were performed to compare differences between two groups for measurement data. The normality of variables was tested using Kolmogorov-Smirnov test before the use of student’s t-tests. Variables without normality were compared using Mann-Whitney U tests. P values were two-tailed with a significance level of 0.05.

Demographic and clinical characteristics of the study cohort

The study flowchart and clinical follow-up schedule were displayed in Figure S1. The demographic data of participants is summarized in Table 1. Briefly, most were male, with an average age around 59.6±6.5 and 59.8±7.0 in the telerehabilitation and control groups, respectively. No differences were revealed in risk factors, including hypertension, diabetes, and smoking, and the dominant pathological pattern in both groups was squamous cell carcinoma, with one adenocarcinoma in the telerehabilitation group. The tumors in both groups were mostly located at the middle thoracic level, and most patients were in the early stages of disease, with no differences between the two groups. 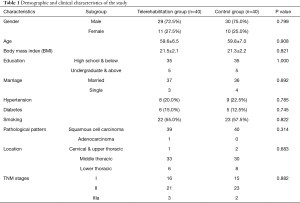 Table 1 Demographic and clinical characteristics of the study
Full table

Baseline assessments were performed at discharge for each participant, and as is shown in Table 2, there was no significant difference in the EORTC QLQ-C30 and QLQ-OES18 scores between groups. 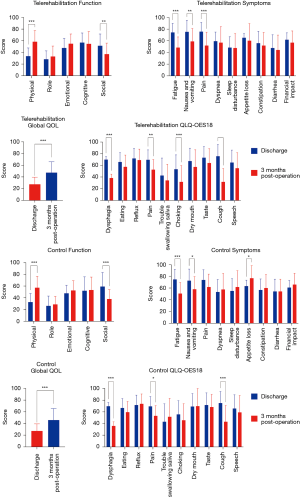 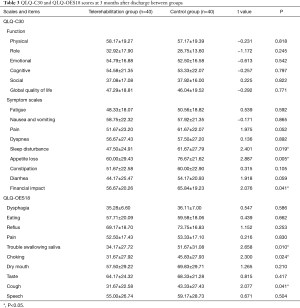 The comparison of the QLQ-C30 and QES-18 score changes at three months after discharge was revealed in Figure 2. Similar to results in the horizontal comparison of the QLQ-C30 and QES18 score at 3 months post-operation, though there was no significant difference in function area between groups, more score changes were noticed in the emotional, cognitive, and role function part (Figure 2A). Moreover, nearly all aspects in the telerehabilitation group displayed more score changes with significant changes in the appetite loss and pain part (P<0.001 and P=0.04, respectively, Figure 2B). The score changes in QLQ-OES18 revealed significant improvement in swallowing saliva (P=0.02), as well slight improvements in choking, dry mouth, taste, and cough without significance (Figure 2C). 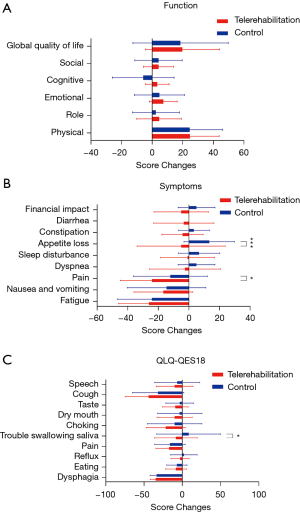 Surgical resection of the esophagus is associated with multiple short-and long-term adverse effects, including high rates of postoperative complications, decreased muscle strength, altered cardiopulmonary function, emotional impact, and mortality. Whether preoperative functional training can benefit postoperative recovery after esophageal surgery is controversial (14,15). Several studies have demonstrated that preoperative inspiratory training and nutrition optimizing improves perioperative functional capacity (16,17). However, other studies queried the effectiveness of preoperative functional training (18-20), which may make post-operation rehabilitation more important. Since the outbreak of COVID-19, the disease has spread rapidly with high contagiousness and mortality (21), and the risk of infection in attending hospitals has made many patients hesitate to return for face-to-face post-operation consulting and rehabilitation. Herein, we investigated the effectiveness of telerehabilitation consulting and training in a cohort of 86 patients who received minimally invasive esophagectomy between September 2020 and January 2021. Using EORTC QLQ-C30 and QLQ-OES18 scales, we found patients’ QOL could be significantly improved at 3 months after surgery. However, additional telerehabilitation consulting and training may also help in pain-relief and solving problems in sleeping and appetite loss.

The EORTC QLQ-C30 contains 30 items in total, including 15 areas: five functional areas (physical, role, emotion, cognition, and social function), one global QOL subscale, and nine symptom areas (pain, fatigue, nausea and vomiting, dyspnea, sleep disturbance, loss of appetite, constipation, diarrhea, and financial impact) (11). The OES18 is a supplementary symptom scale for esophageal cancer, which specifically includes 18 items such as dysphagia, eating, reflux, pain, saliva, choking, dry mouth, loss of appetite, cough, and speech (12). Many clinical trials, including trials conducted in a Chinese population, have proven that the combined application of QLQ-C30 and QLQ-OES18 can more accurately reflect the relationship between the symptoms of esophageal cancer patients and their QOL (22,23).

In our study, the telerehabilitation group showed improvements mostly in pain relief, appetite loss and sleep disturbance. We assumed this was because telerehabilitation provided a platform for patients to share both their stories of discomfort and methods of coping, which could reduce their stress to some extent. This contrasts with the traditional method of rehabilitation, where patients must cope with their problems until returning to the clinic. Moreover, we found the patients in the telerehabilitation group coped with swallowing saliva better. Telerehabilitation can overcome the inconvenience of having to travel to the clinic and reduce the risk of exposure to coronavirus infection. The reduction in face-to-face consultations may also reduce costs associated with physical attendance to the clinic and allows more freedom for patients to return to work or engage in other activities. However, this study was conducted in a single institution with limited sample size, and the subjective scale was only evaluated at discharge and 3 months after operation. Multicenter studies with larger sample studies and longer follow-up durations are required to verify the results.

In conclusion, our study demonstrated that telerehabilitation was at least an important supplement to traditional face-to-face consulting and training for patients after esophageal cancer surgery, especially during the COVID-19 period. However, not all areas in patients’ QOL improved, which suggests a need for modifying the procedures and contents of telerehabilitation.

We would like to thank all participants for their cooperation in this study.

Funding: This work was supported by the Financial Special Project of Fujian Province (Grant number: 2020CZ011).

Reporting Checklist: The authors have completed the CONSORT reporting checklist. Available at https://dx.doi.org/10.21037/jgo-21-385

Conflicts of Interest: All authors have completed the ICMJE uniform disclosure form (available at https://dx.doi.org/10.21037/jgo-21-385). All authors reported that this work was supported by the Financial Special Project of Fujian Province (Grant number: 2020CZ011). The authors have no other conflicts of interest to declare.

Ethical Statement: The authors are accountable for all aspects of the work in ensuring that questions related to the accuracy or integrity of any part of the work are appropriately investigated and resolved. The study was conducted in accordance with the Declaration of Helsinki (as revised in 2013). The study protocol was approved by the ethics committees of Fujian Medical University Union Hospital (No.: 2020KY0160) and written informed consent was obtained from all patients.