Development and validation of a Surveillance, Epidemiology, and End Results (SEER)-based prognostic nomogram for predicting survival in elderly patients with gastric cancer after surgery

Gastric cancer (GC) is the fifth most common malignancies worldwide with approximately 783,000 deaths in 2018, ranking third in deadly cancer (1-3). Both incidence and mortality of GC are featured by geological, diet and infection factors. Improved knowledge of prevention on Helicobacter pylori infection and related risk factors of GC have considerably reduced the overall incidence (4,5). However, increasing incidence of GC in cardia has been noticed during the past decades up to over 7-fold as many (1). Moreover, several classification systems, such as Lauren classification and an alternative one (papillary/tubular/mucinous/poorly cohesive), do not fully demonstrate clinical utility (6).

Increasing notice of heterogeneity intrigues the genomic exploration of GC, which is of essence to the full picture. The Cancer Genome Atlas (TCGA) study revealed that, comparing to classic tumor-node-metastasis (TNM) classification from WHO system, GC could be divided into four groups, including Epstein-Barr virus (EBV) positive (recurrent PIK3CA mutation and extreme DNA hypermethylation), microsatellite unstable (MSI, high mutation rates), genomically stable and chromosomal instability groups (6,7). Interestingly, TCGA indicates that genomically stable GC are more enriched at an earlier age (median age 59 years) whereas MSI tumors are found at a relatively older age (median age 72 years) (7). Another nation-wide investigation reports that age-specific trends vary significantly between older and younger groups across the United States (8). Incidence (per 100,000) drops significantly from 19.8 to 12.8 in GC patients with age 60 to 84 while increases from 0.27 to 0.45 in GC with age 25 to 39 years (8). Our previous study reported an effective prognostic nomogram for young GC (9). Only tumor size and tumor site were included for the establishment of nomogram in this study given the comparably limited sample size (276 cases as training set) (9).

Elderly GC (ELGC) remains one of the intensively investigated topics during the last decades. It is defined as GC patients over 70 years (10-12). ELGC is more correlated to intestinal type, expansive tumor growth and synchronous multiplicity with comparable poor survival outcome (11). Another study indicates that ELGC is more likely to present advanced TNM stage and larger tumor size with less odds in distant metastasis (12). Therefore, to establish a comprehensive nomogram for effective clinical practice and assessment is of significance. Noteworthy, Roberto et al. reported a prognostic nomogram for ELGC using 143 cases aged over 80 years (13). Given the shortage of large sample size in GC, it is more reliable to conduct a prognostic nomogram using public-available Surveillance, Epidemiology, and End Results (SEER) database from the National Cancer Institute (14-16). Therefore, in this study, ELGC cases from SEER database were retrieved for the establishment of nomogram. We present the following article in accordance with the TRIPOD reporting checklist (available at http://dx.doi.org/10.21037/jgo-20-536).

The study was conducted in accordance with the Declaration of Helsinki (as revised in 2013).

All the ELGC cases were retrieved from the SEER database (2004–2016) using ID 16595-Nov2019 (17). The criteria of inclusion were as follow: (I) stomach confirmed in “Site and morphology, site recode ICD-3/WHO 2008”; (II) age above 70 (including); (III) complete American Joint Committee on Cancer (AJCC) TNM information; (IV) only one primary tumor; (V) with surgery performed. Moreover, histologic type ICD-O-3 was retrieved to not only adenocarcinoma but other types of malignancies were covered, such as mixed tumor (malignant NOS). Clinical information, including age, sex and numerous variables were collected for characterization and further univariate/multivariate analysis. Total ELGC cases were randomized into training and validation groups equally. Overall survival (OS) and cancer-specific survival (CSS) were listed as primary and secondary endpoints, respectively. Moreover, x-tile program (Yale University, United States) was utilized for the optimal cutoff value of consecutive variables, including age and tumor size (18).

Univariate and multivariate analysis of all recorded clinical variables was performed. Those variables with statistically significance were extracted for the establishment of nomogram model both in OS and CSS. Next, the validation group was analyzed for assessment using the concordance index (C-index) and calibration plot. Moreover, the predict power of this nomogram was also assessed by ROC and decision curve analysis (DCA) curves. All analysis was performed by R software 3.6.0 (Vienna, Austria).

Patient recruitment and characterization of cases 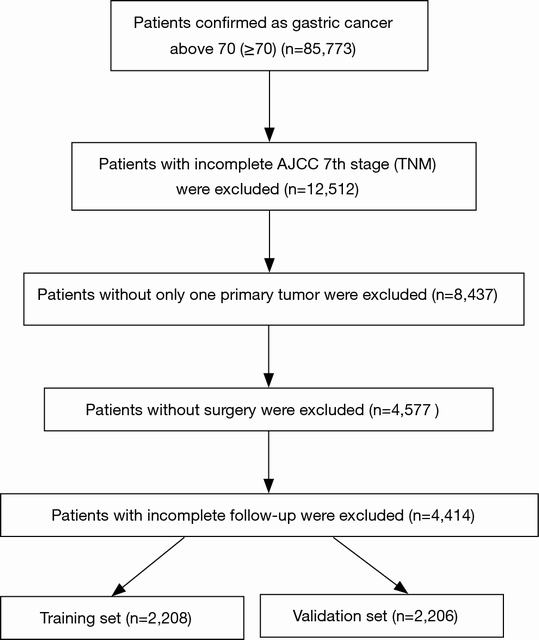 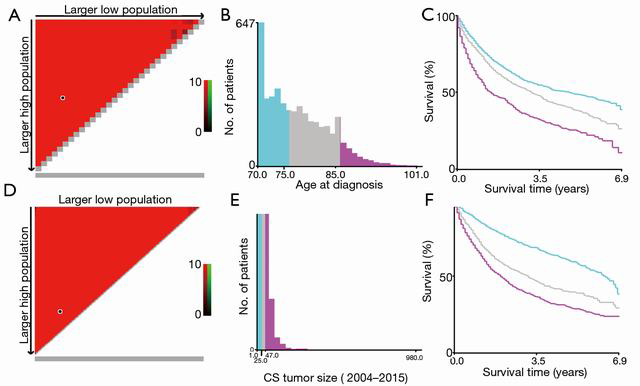 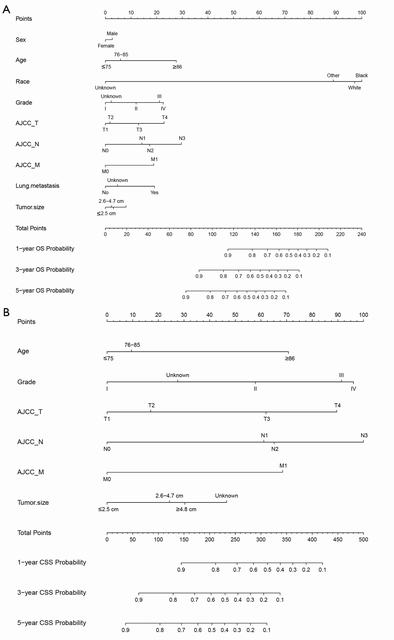 Validation of the established nomograms 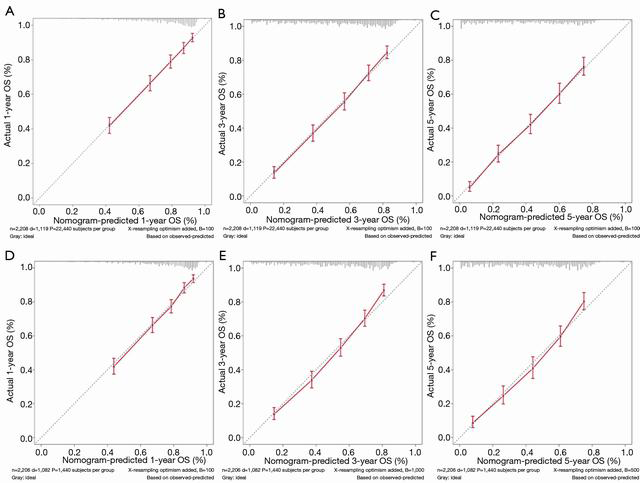 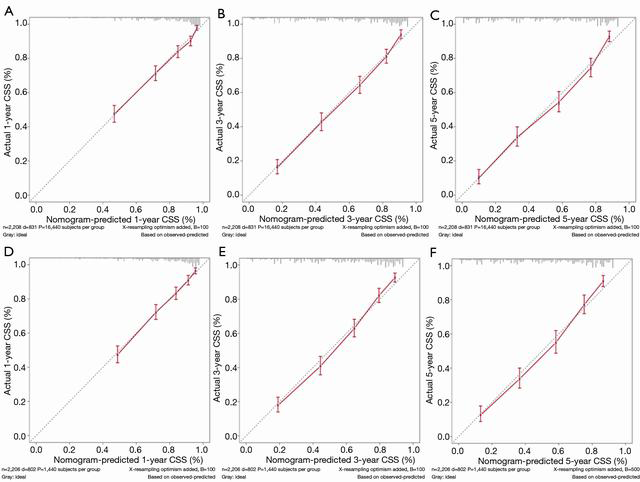 In DCA, nomograms of OS and CSS performed better than AJCC TNM stage (Figure 7). In fact, the both OS and CSS nomograms showed higher statistic power over the AJCC stage (Table 5, Figures 8,9). 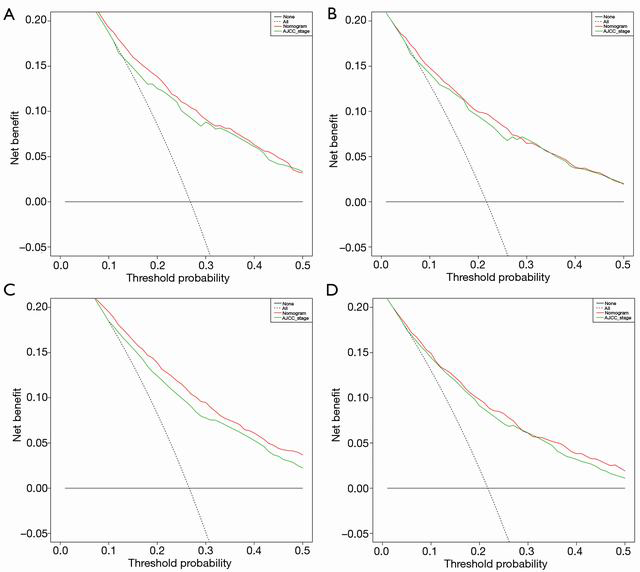 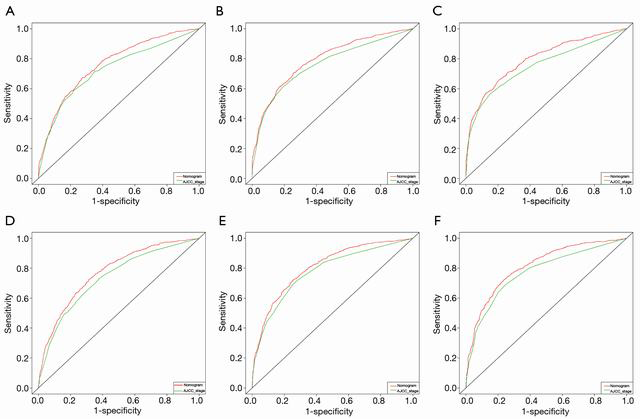 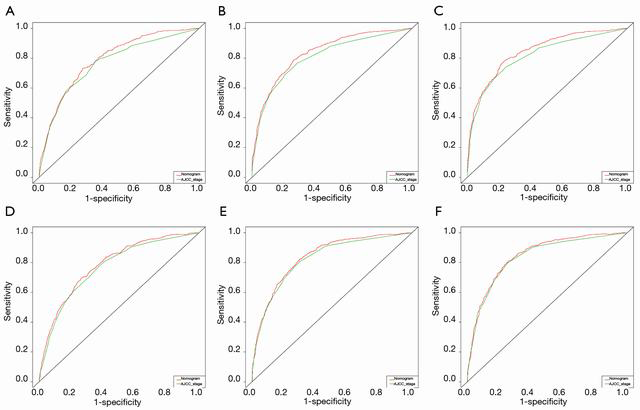 By now, this is the first study highlighting the potential value of nomograms targeting ELGC with population dataset. For consecutive variables like age and tumor size, x-tile software was utilized for the optimal cutoff. There are a few points that should be discussed prior to conclusion.

First, although univariate analysis of OS and CSS have identified variables with significance (P<0.05), we believe a proper extension of cutoff P value (P<0.2) is reasonable and applicable. Second, sex and marital status are not included at the nomograms of OS and CSS in this study. In fact, the role of marital status in GC had been investigated (19). Qiu et al. reported that unmarried GC tended to have higher risk of cancer specific mortality (19). Our study showed no significant role of marital status associated with ELGC, indicating a possible close association of marital status to young GC rather ELGC. Third, among all four classic distant metastasis lesions, lung, brain, bone and liver, only lung metastasis was identified as a contributor to OS nomogram while none of distant metastatic lesions was associated with CSS nomogram. A similar study focusing on the nomograms of metastatic gastric adenocarcinoma with palliative gastrectomy reported that metastasis was one of the major contributors (20). However, distant lymph node metastasis and visceral metastasis were mainly evaluated. Our study complements the finding of previous study by highlighting the role of lung metastasis in the prognosis prediction of OS.

Similarly, there were numerous studies that focused on the age of GC using nomograms (21). Zhou et al. reported a prognostic nomogram to predict the OS of elderly GC using SEER data resource. However, there are several differences in between. First, the period of included cases in Zhou et al. was between 2005 and 2014 while the prognostic data of resources from our study were updated to 2016. Second, the inclusion criteria were different with only 1,445 cases in Zhou et al. results while we included 4,414 cases. The definition of ELGC was above 75 in Zhou et al. while above 70 years old in our study. In fact, we have solid evidence to support the definition (10-12). Third, both OS and CSS study were included in our study compared to Zhou et al., enhancing the distinct clinical values of the nomogram models in our results. Moreover, compared to the variables of nomogram in Zhou et al., sex, age, race, lung metastasis and tumor size also demonstrated remarkable influences on nomogram of OS, especially age itself. We believe the nomogram to predict the prognosis of ELGC opens up an opportunity to notice the significant role of age with much more subtle classification, such as patients between 70–75 years old, between 76–85 years old and patients ≥86 years old.

This study established and validated novel nomogram models of OS and CSS for ELGC based on population dataset.

Reporting Checklist: The authors have completed the TRIPOD reporting checklist. Available at http://dx.doi.org/10.21037/jgo-20-536

Conflicts of Interest: Both authors have completed the ICMJE uniform disclosure form (available at http://dx.doi.org/10.21037/jgo-20-536). The authors have no conflicts of interest to declare.