We present the following article in accordance with the CARE reporting checklist (available at: http://dx.doi.org/10.21037/jgo-20-478).

A 59-year-old woman presented to the emergency room in March 2019 with acute abdominal pain (Figure 1). She was in otherwise good health, and past medical history consisted only of a chondrosarcoma of the cranium, diagnosed in 2013, which was resected, radiated, and remained in remission through surveillance. There was no significant family medical history. On presentation in 2019, CT demonstrated a mass with solid and cystic components in the tail of the pancreas with no evidence of metastatic disease. FDG-PET showed intense uptake (SUV 12) in the pancreatic mass and no evidence of metastases. An EUS-guided FNA biopsy was highly suspicious for carcinoma. Both CEA and CA19-9 were within normal limits. 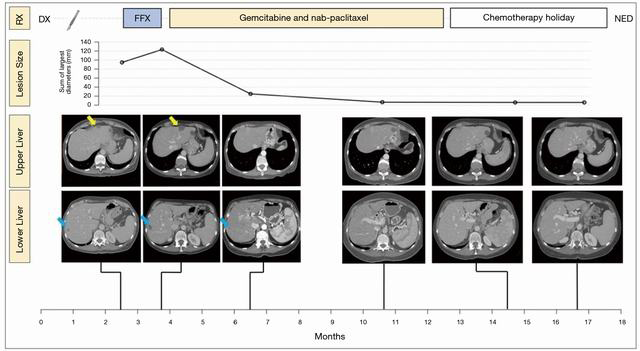 In April 2019, she underwent a robotic distal pancreatectomy with findings of a 1.6 cm invasive carcinoma with negative margins but with lymphovascular and perineural invasion and 1 of 35 nodes with malignant involvement. Surgical pathology review demonstrated sheets of monomorphic epithelioid cells with eosinophilic cytoplasm and a faint rhabdoid appearance but without glandular architecture, thus prompting consideration of a wide differential of non-adenocarcinoma neoplasms. Synaptophysin and chromogranin were negative, providing no support for neuroendocrine differentiation. There was no expression of p63, lending no support for myoepithelial or squamous differentiation. ERG and CD34 were negative, providing no support for vascular differentiation. HMB45 negativity ruled out perivascular epithelioid cell tumor (PEComa). Lack of Sox-10/S100 and CD45RB expression, refuted metastatic melanoma or hematolymphoid differentiation, respectively. Given the patient’s prior chondrosarcoma, that histology was compared to the pancreatic specimen, but the morphology was not similar. CK19 and CK7 were positive while CDX2 was negative, consistent with a pancreatic neoplasm. Immunohistochemical staining was broadly positive for pan-cytokeratin CKmix, consistent with epithelial differentiation. Stains for INI1 (SMARCB1) demonstrated a complete loss of nuclear expression in the neoplastic cells (Figure 2). Additional molecular studies showed intact mismatch repair proteins, PD-L1 expression with CPS of 20, and HER2 IHC was negative. Targeted tumor mutational profiling with the Stanford Tumor Actionable Mutation Panel identified a KRAS G12D mutation and variants of unknown significance in EPHA2 C376F and a KDR L1095 frameshift, consistent with a low tumor mutational burden. Multigene testing for inherited mutations identified no abnormalities. The overall findings were that of a stage IIb (pT1c N1 M0) primary pancreatic INI1-deficient undifferentiated rhabdoid carcinoma. 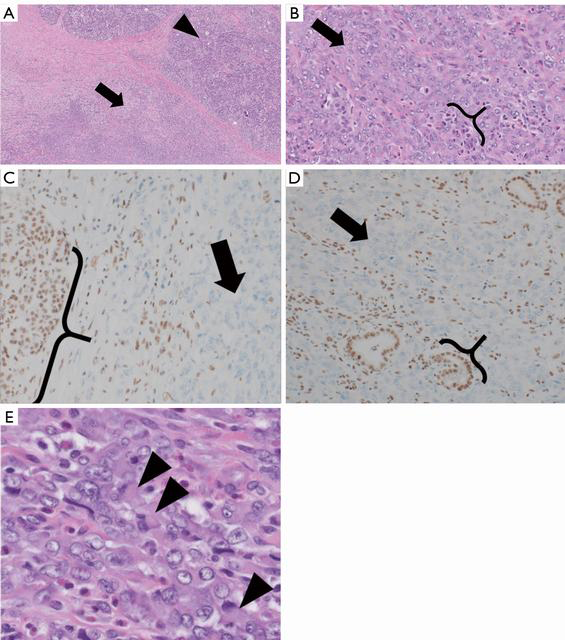 Prior to a planned course of adjuvant chemotherapy, a CT in June 2019 demonstrated multiple [6–7] new liver metastases, the largest of which was 1.9 cm. FNA of one of the lesions confirmed metastatic disease of similar histology. An attempt to grow organoids from the biopsy was unsuccessful.

She then received three doses of mFOLFIRINOX but due to progressive increase in right upper quadrant pain, a CT scan was ordered prior to a planned 4th dose, which demonstrated an increase in size and number of liver metastases (Figure 1) warranting change in therapy.

In July of 2019, she was switched to gemcitabine 850 mg/m2 with nab-paclitaxel 100 mg/m2. Treatment on cycle 1 day 15 was held due to cytopenia. A short interval scan in August 2019, after receiving day 1 and day 8 of treatment, showed no new hepatic lesions and size stability of all known liver lesions. Treatment frequency was reduced to every other week dosing on account of the cytopenia.

Following two months of therapy, she had a dramatic clinical improvement, reporting that her abdominal pain had decreased to a level of 1–2 out of 10 and she had stopped taking all analgesics. She said that she felt as well as she did before her illness. Follow-up CT CAP in October 2019 showed marked reduction in the size of multiple hepatic metastases. She continued biweekly therapy. By November 2019, her abdominal pain had resolved completely. She developed peripheral neuropathy for which the nab-paclitaxel dose was reduced, and a rash, which was managed with prednisone. CT scan in December 2019 showed continued response, with all remaining liver disease subcentimeter in size. She started planning a long-distance vacation. By late January, CT no longer identified any lesions in the liver. In March of 2020, she began a chemotherapy holiday, and at scan and follow-up in August 2020, she remained without radiographic or clinical evidence of disease, and continues on surveillance off treatment at the time of submission.

All procedures performed in studies involving human participants were in accordance with the ethical standards of the institutional and/or national research committee(s) and with the Helsinki Declaration (as revised in 2013). Written informed consent was obtained from the patient.

Chromatin accessibility is a tightly regulated process and an integral determinant of gene expression. Disruption of chromatin remodeling can promote tumorigenesis (7,8). The gene INI1, also known as SMARB1, for SWI/SNF-related matrix-associated actin-dependent regulator of chromatin subfamily B member 1, encodes for proteins involved in relieving repressive chromatin structures, thus acting as a tumor suppressor gene (9). Its carcinogenicity is in part linked to is dysregulation of cyclin-dependent kinase inhibitor p16, Wnt signaling, and E2F factors, among others (10). Following diagnosis in any age or organ, nearly all SMARCB1/INI1-deficient malignancies typically follow an aggressive clinical pattern and have a poor prognosis (1).

On presentation, the patient was 59 years old, with excellent performance status after her operation. Lacking specific guidelines to inform therapy selection in this rare histology, chemotherapy was chosen based on extrapolation for pancreatic ductal adenocarcinoma. Thus, first-line therapy with FOLFIRINOX was chosen, which is associated with a median overall survival of 11 months in patients with metastatic pancreatic adenocarcinoma (11). The cancer immediately progressed through first line therapy. Gemcitabine with nab-paclitaxel was chosen for second-line therapy, and the patient had an immediate response. The lack of long-term follow-up is a limitation of this case report. Nevertheless, the response thus far achieved was remarkable: two studies have explored the response rate of second-line gemcitabine with nab-paclitaxel in metastatic pancreatic ductal adenocarcinoma following FOLFIRINOX therapy: (I) in a study of 30 patients, including 11/30 (37%) who had progressive disease on FOLFIRINOX, there were 0/30 patients on gemcitabine with nab-paclitaxel who then achieved a complete response and only 4/30 (13%) achieved a partial response (12); and (II) among 57 patients, including 16 of 57 (28%) who had progressive disease on FOLFIRINOX, there were 0 of 57 patients achieving a complete response and only 22 of 57 (39%) achieving a partial response (13). Thus, while primary refractoriness to FOLFIRINOX is not rare (37%, and 27%), achieving a complete response to gemcitabine with nab-paclitaxel has not been previously reported and thus this case is exceptional.

The underlying mechanism explaining the complete clinical response to gemcitabine with nab-paclitaxel despite rapid progression on FOLFIRINOX is not clear. We speculate that the excellent response achieved with gemcitabine and nab-paclitaxel may be related to the different mechanism of action of the latter, which may better synergize with INI1 deficiency-mediated defects in chromatin remodeling. We note an established link between defects in chromatin remodeling and mitotic spindle function (14), suggesting a role for synergism or synthetic lethality when combining INI1 deficient neoplasms with microtubule inhibitors. Combining HDAC inhibitors with other therapeutics in pancreatic cancer is an area of active investigation (15), but has met with limited success. For example, trials in pancreatic ductal adenocarcinoma using HDAC inhibitors along with gemcitabine have largely been disappointing (8). It has been shown that HDAC inhibitors potentiate topoisomerase I-mediated DNA damage (16) and exploiting the rationale that HDAC inhibitors may sensitize tumors to topoisomerase inhibitors is an area of active study (17). As an alternative explanation, we note that while CPS score is not commonly used as a predictive biomarker in pancreatic cancer, the CPS score in this case was 20, suggesting a robust degree of immunogenicity of the tumor; perhaps this PD-L1 staining immune compartment primed an immune response for second-line therapy. Ultimately, a greater mechanistic understanding is needed to identify predictive biomarkers of response for this rare pancreatic neoplasm.

In conclusion, while the optimal treatment for INI1-deficient undifferentiated rhabdoid carcinoma of the pancreas is not known, this clinical case report highlights an exceptional response to gemcitabine with nab-paclitaxel, despite initial failure of FOLFIRINOX, which may rightfully influence first-line treatment selection in this rare malignancy.

Reporting Checklist: The authors have completed the CARE reporting checklist. Available at: http://dx.doi.org/10.21037/jgo-20-478

Conflicts of Interest: All authors have completed the ICMJE uniform disclosure form (available at: http://dx.doi.org/10.21037/jgo-20-478). George Fisher reports personal fees from Merck, Taiho, Roche, Terumo and Ipsen; and has served data safety monitoring boards for Astra Zeneca, Hutchison Pharma and Cytom X and Silenseed. The other authors have no conflict of interests to disclose.

Ethical Statement: The authors are accountable for all aspects of the work in ensuring that questions related to the accuracy or integrity of any part of the work are appropriately investigated and resolved. All procedures performed in studies involving human participants were in accordance with the ethical standards of the institutional and/or national research committee(s) and with the Helsinki Declaration (as revised in 2013). Written informed consent was obtained from the patient.