Gastric carcinoma (GC) is the fifth most prevalent lethal malignancy and third leading cause of cancer-related death worldwide (1). Improvements in diagnostic technology over recent decades has resulted in more effective and comprehensive treatment and a decrease in the mortality rate of GC, yet the treatment cure rate and 5-year survival rate remain low (2). Although the etiology of GC is complex and remains unclear, increasingly studies have shown that gene expression dysfunction is one of the main factors in its pathogenesis (3,4). Recently, gene sequencing technologies have increasingly attracted the attention of oncologists. The emergence of genome-wide association studies has resulted in the identification of several susceptibility loci associated with the mechanisms underlining cancer initiation and progression (5). Therefore, identifying molecular markers closely related to the occurrence and development of GC has become a pressing concern.

Thrombospondins (THBSs) are known to be multidomain matricellular glycoproteins secreted by stromal fibroblasts, endothelial cells, and immune cells (6). THBS family members consist of five highly homologous glycoproteins (7). The THBSs of mammals play many complex tissue-specific roles in tumor development and progression, such as cell migration, proliferation, and tumor growth (8). THBSs have a tissue remodeling function in humans, and have expression differs in various types of human malignancies, like GC (9), colorectal (8), urological (10), and breast cancer (11). Recent studies have demonstrated that a component of THBSs may be related to patient’s survival in some types of cancer and could serve as cancer diagnostic or prognostic biomarkers. For instance, Berger et al. have found that THBS2 is a potential prognostic and diagnostic marker in pancreatic cancer (12). In addition, Marisi et al. demonstrated that THBS1 could be utilized as a biomarker in patients with metastatic colorectal cancer receiving bevacizumab (13). Increasing studies have disclosed that THBSs could promote tumor cell proliferation, migration, invasion, and metastasis as well as a poor prognosis in patients with GC (9,14). However, whether the THBS gene family can be a potential prognostic marker for GC and its underlying mechanism is still unknown.

In this study, we systematically analyzed the expression and clinical outcomes of THBS family members in GC based on different online databases. This analysis may provide new insight into the diagnosis and treatment of patients with GC.

We present the following article in accordance with the REMARK reporting checklist (available at http://dx.doi.org/10.21037/jgo-21-54).

The study was approved by the Academic Committee of First Hospital of Gannan Medical University and conducted in accordance with the Declaration of Helsinki (as revised in 2013).

The cBioPortal for Cancer Genomics is a Web resource with visualization and analysis capabilities (www.cbioportal.org) (19,20). We chose the GC dataset (TCGA, Provisional) which contains the data of 478 GC patients for analyses of the relationship between THBSs in GC patients and alteration frequency. Selected genomic profiles included mutations, copy-number variance from GISTIC, and mRNA expression z-scores (RNA Seq V2 RSEM) with a z score threshold of ±2.0. Network analyses were also performed online using this method (21).

The correlation between mRNA expression of THBS family members and overall survival (OS) in GC was evaluated by the Kaplan-Meier plotter (www.kmplot.com) (24). We then analyzed THBS family genes prognostic values associated with clinic stages using this database. Log rank P value and hazard ratio (HR) with 95% confidence intervals were summarized from the KM plotter webpage.

SPSS v. 22.0 (SPSS Inc., Chicago, IL, USA) was used for statistical analyses. All values obtained from the studies were presented as mean ± SE. The expression levels of THBSs were compared between cancer specimens and normal controls by performing student’s t-test. The calculation of OS was carried out using Kaplan-Meier plotter analyses and log-rank test. P<0.05 were considered statistically significant. 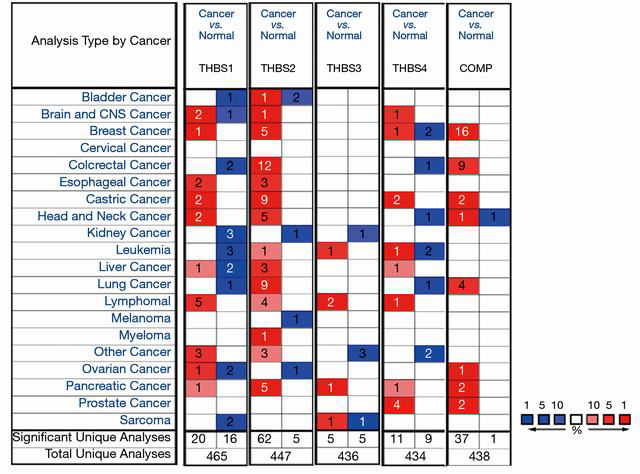 Figure 1 The mRNA expression of THBS family members in different cancer types. THBS gene family expressions (cancer vs. normal tissue) analyzed with ONCOMINE database. The graphic demonstrates the numbers of datasets with statistically significant mRNA over-expression (red) or down-expression (blue) of the target gene. The P value threshold is 0.01. The number in each cell represents the number of analyses that meet the threshold within those analysis and cancer types. The gene rank was analyzed by percentile of target gene in the top of all genes measured in each research. Cell color is determined by the best gene rank percentile for the analyses within the cell. THBS, thrombospondin. 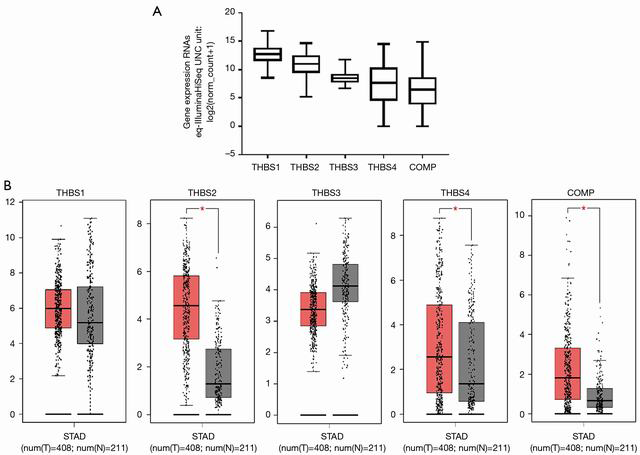 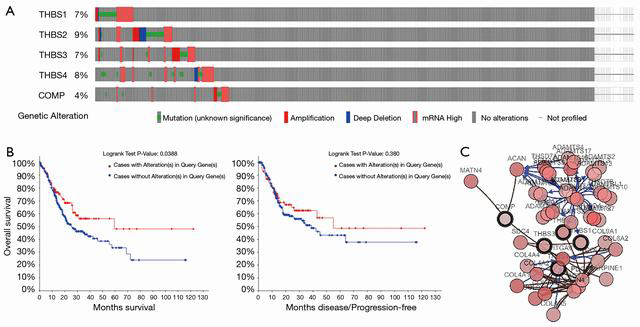 Figure 3 Analysis of THBSs’ alterations in GC. The analysis was performed using the cBioPortal database. (A) Oncoprint in cBioPortal represented the proportion and distribution of cases with THBS alterations; (B) the Kaplan-Meier plot comparing overall survival (OS) and disease-free survival (DFS) of GC patients with THBS alterations and without THBS alternations; (C) gene-gene interaction network among THBS family members and 50 most frequently altered neighboring genes. THBSs, thrombospondins; GC, gastric cancer.

Functional enrichment analysis of THBSs in patients with GC

To further understand the mechanism and function of THBSs and the 50 hub genes, gene ontology (GO) biological processes (BP) and Reactome gene sets were applied using Metascape (Figure 4A,B and Table 1). Among the top 19 clusters with their representative enriched terms (one per cluster), there were 15 items of GO biological process, and four items of Reactome Gene Sets. The results showed that the THBSs and their neighboring genes were mainly involved in BP such as cell-substrate adhesion, blood vessel development, and platelet degranulation. The Reactome pathways that these genes were involved in were O-glycosylation of TSR domain-containing proteins, extracellular matrix (ECM) organization, Syndecan interactions, and RAF/MAP kinase cascade. Moreover, to further investigate the relationship between THBSs and GC, a PPI network was constructed according to information from the Metascape online database. PPI network and MCODE components identified in the gene lists are shown in Figure 4C and the top two modules with high scores were obtained from the PPI network. As shown in Figure 4D, the biological functions mainly related to MCODE 1 were malaria, signaling by PDGF, and ECM-receptor interaction, while in MCODE 2 these were anchoring fibril formation, crosslinking of collagen fibrils, and laminin interactions. 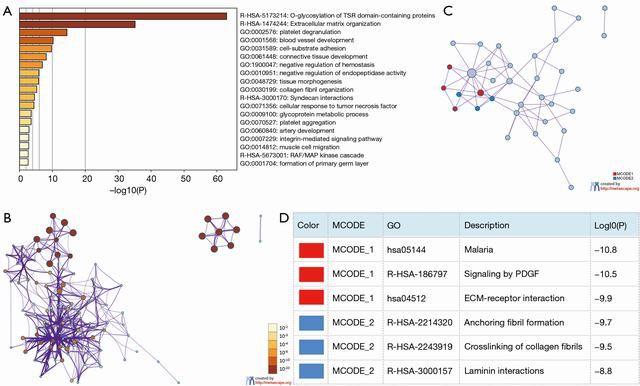 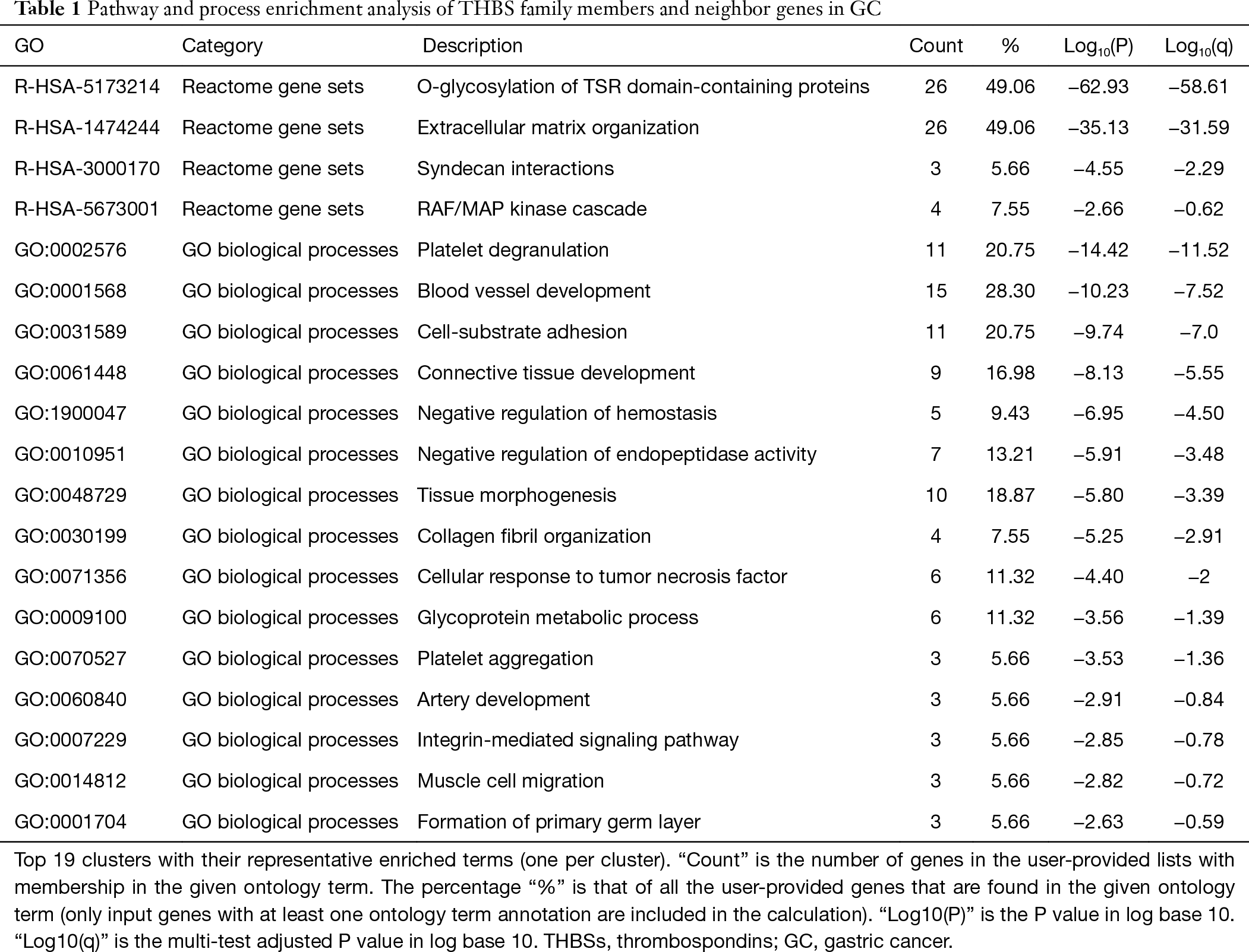 We used Kaplan-Meier plotter analysis to assess the potential prognosis of THBS family members in GC patients. The results showed that mRNA levels of THBSs were strongly related to worse OS in GC patients (P<0.05) (Figure 5). To further explore the critical role of THBS family genes in the prognosis of patients with GC, we also investigated the relationship between THBS family genes and clinical stages. The mRNA overexpression of THBSs indicated poor OS in stage III/IV GC and high THBS1, THBS3, THBS4, and COMP expression were related to worse OS in stage II GC. Moreover, THBS3 and THBS4 were also significantly correlated with poor OS in stage I GC (Table S1). 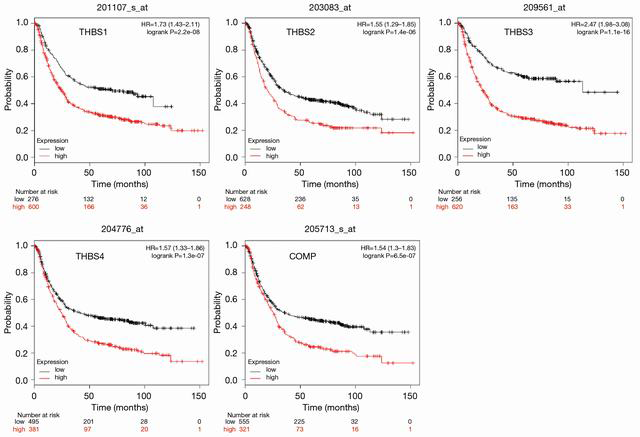 Gastric cancer is a significant public health problem in Asia and efforts to improve its treatment and prognosis are highly sought. Recent studies have demonstrated that genetic changes play a strong role in the development of GC (25). However, the underlying mechanism of gene expression differences in the development of tumors remains poorly understood. Therefore, it is essential to find new prognostic markers to improve the clinical outcome of GC patients.

Numerous studies had shown the significant role of THBS in distinct types of cancer (26,27). A recent study reported that the low expression of THBS1 correlated with a more advanced grade of liver and lymph node metastases and significantly worse OS than strong THBS1 expression (28). Animal studies have also revealed that bone metastases were abolished when THBS2 was actively reduced in prostate cancer (PCa) cells (29). Moreover, patients with increased COMP expression presented with poorer OS compared to patients with no change or reduced COMP expression (26). In addition, over-expression of THBS4 enhanced hepatocellular carcinoma (HCC) migration and vascular invasion, and targeting THBS4 may provide a promising therapeutic strategy for treatment of advanced HCC (30). However, research on the role of THBS3 in cancer is limited. Although the roles of distinct members of THBS in many cancers have been partially confirmed, there has been no comprehensive analysis of the role of THBS family members in GC to date. Our study is the first to explore the expression profiles and prognostic significance of different THBSs in GC based on available databases. Our results showed that THBS2, THBS4, and COMP were significantly higher in GC tissues than in corresponding normal tissues, and indicated worse OS in GC patients. By using cBioPortal for cancer genomics, it was determined that the alteration frequency of THBSs in GC is not low (25%) and varied from 14.29% to 18.18% for five different types of stomach adenocarcinoma based on the TCGA Provisional database. Moreover, GC patients with alterations of THBSs were found to have much worse OS compared to those without alterations in any query gene. Finally, to better understand the function and carcinogenic mechanism of THBSs for GC, we performed a functional enrichment analysis and our results suggested that THBS family members might play critical roles in the development of multiple tumors. Whilst it is clear that dysfunction of THBS genes is closely correlated with the prognosis of many different types of cancer, there is presently little knowledge of its potential mechanism, function, and prognostic value in GC. More studies on the role of THBS genes are required to understand their significance to GC therapy.

We are grateful to Dr. Zhan Zhang for revising the figures.

Funding: This work was supported by the Youth Foundation of Jiangxi Provincial Education Department (Grant No. GJJ13671).

Reporting Checklist: The authors have completed the REMARK reporting checklist. Available at http://dx.doi.org/10.21037/jgo-21-54

Conflicts of Interest: All authors have completed the ICMJE uniform disclosure form (available at http://dx.doi.org/10.21037/jgo-21-54). The authors have no conflicts of interest to declare.

Ethical Statement: The authors are accountable for all aspects of the work in ensuring that questions related to the accuracy or integrity of any part of the work are appropriately investigated and resolved. The study was approved by the Academic Committee of First Hospital of Gannan Medical University and conducted in accordance with the Declaration of Helsinki (as revised in 2013).