The assessment of intraoperative technique-related risk factors and the treatment of anastomotic leakage after esophagectomy: a narrative review

Table 1 Comparison of the incidence of anastomotic leakage after esophagectomy: OE versus MIE
Full table

Table 2 Comparison of the incidence of anastomotic leakage after esophagectomy: CEA versus IEA
Full table

The management of anastomotic leakage after esophagectomy

Intrathoracic anastomotic leakage after esophagectomy is accompanied by high morbidity and mortality. Indeed, the intrathoracic manifestation of cervical anastomotic leakage occurs in more than 50% of patients and immediate and sufficient drainage is required to prevent further contamination of the content of the gastrointestinal tract (38). Drainage includes naso-leakage drainage and pleural drainage. In circumstances in which percutaneous abscess drainage is technically impossible or ineffective, naso-leakage drainage plays an important role. A naso-leakage tube is placed through the anastomotic leakage at the bottom of the abscess cavity under the guidance of an ultra-slim electronic gastroscope or using the interventional radiology technique. The naso-leakage tube is connected to a negative vacuum device for drainage and irrigation. When the abscess cavity diminishes, the drainage appears clean, and after confirmation that the leakage is healing through upper gastrointestinal radiography using diatrizoate meglumine, the naso-leakage tube can be gradually removed. Shuto et al. examined 25 patients who underwent naso-esophageal extraluminal drainage accompanied with enteral nutrition. Of the patients, 21 (84%) patients had major leakages, 1 (4%) had a minor leakage, and 3 (12%) had tube necrosis. None of the naso-esophageal drainage cases (100%) required reoperation or reintervention, and all patients were completely cured (100%) during hospitalization without any death (39).

In addition to being minimally invasive, naso-esophageal drainage and concomitant enteral nutritional support have been shown to be effective and reliable methods for treating major leakages after esophagectomy (39,40). In our experience, adequate drainage is key to the successful treatment of anastomotic leakages, while naso-leakage extraluminal drainage with or without pleural drainage combined with fasting, water, antibiotics, and enteral nutrition is safe and effective. From 2010 to the present, all patients with anastomotic leakages after esophagectomy have been cured with naso-leakage extraluminal drainage, and the mortality rate has been 0. Figure 1 shows a major leakage, by interventional radiology, whereby a naso-leakage tube was placed into the abscess cavity through the leakage. After three months of naso-leakage drainage, the anastomotic leakage healed successfully. 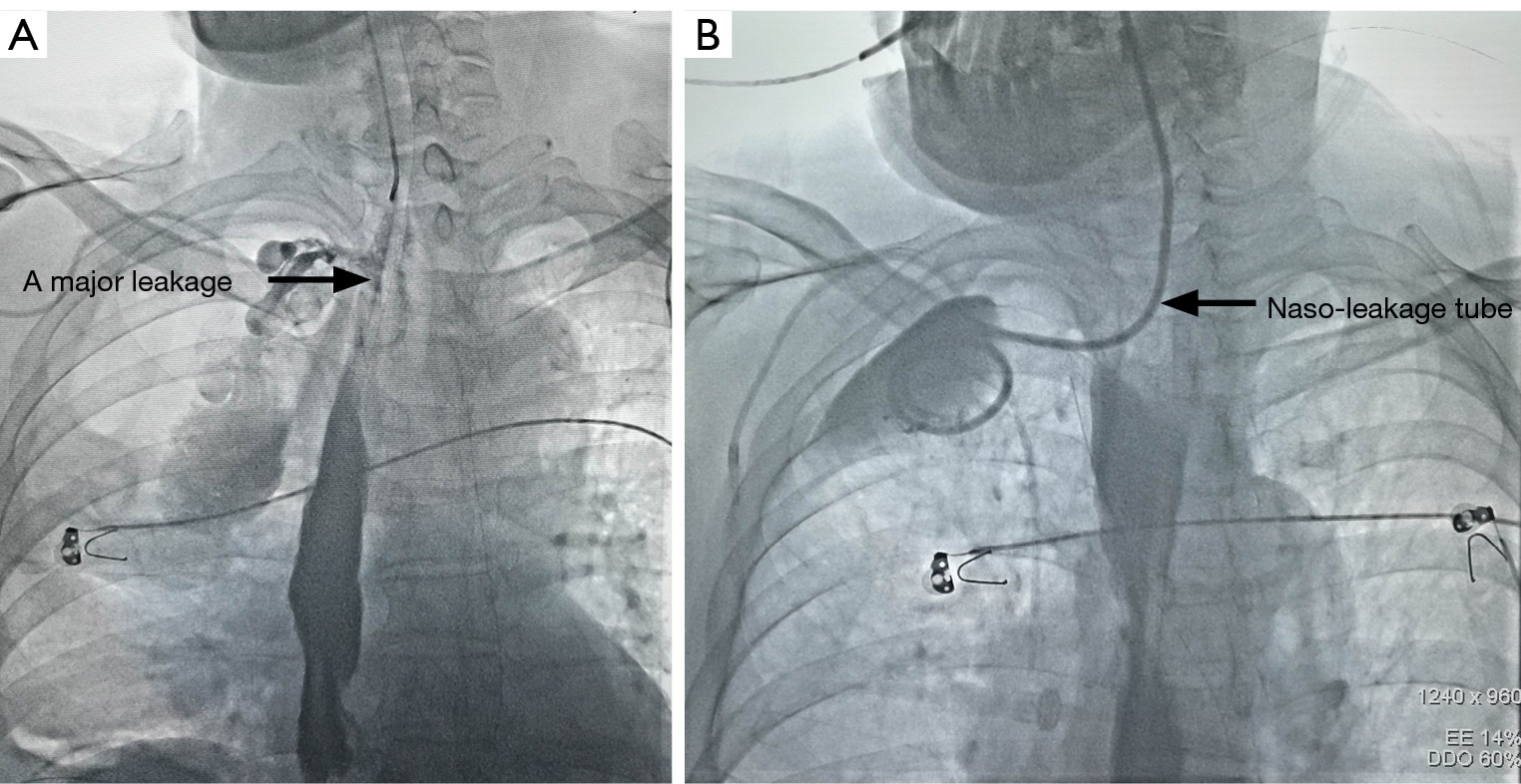 Figure 1 Naso-leakage drainage. (A) An interventional radiology procedure showed a major leakage at the esophagogastric anastomosis; (B) a naso-leakage tube was placed into the abscess cavity through the leakage.

Stent implantation is another method of non-surgical treatment. It can significantly reduce the morbidity and mortality associated with intrathoracic leakages (but not cervical leakages) after esophagectomy. Cervical leakages can be treated by opening the wound in the neck; however, the intrathoracic manifestation of cervical anastomotic leakages requires further treatment. Types of stents include partially and fully covered self-expanding metal stents (SEMS) and self-expanding plastic stents (SEPS). Stents are used to diminish the extra-anastomotic contamination of the pleura and mediastinum and promote leakage healing. However, the application of a stent may be accompanied by some complications, including bleeding, stent migration, leakage deterioration, tissue ingrowth, gastric-tube wall perforation, and death from aorto esophageal fistula. Schweigert et al. reported that endoscopic stent implantation increased the incidence of postoperative aorto esophageal fistulas due to the stent-related erosion of the thoracic aorta, and that the mean time of aorto esophageal fistula occurrence after stent insertion was approximately 26 days (41). Thus, the risk of life-threatening complications after stent implantation needs to be acknowledged (41).

Dasari et al. reported that endoscopic stent treatment is safe and effective for esophageal anastomotic leakages and perforations accompanied by adequate pleural and mediastinal drainage (42).Thus, stent applications are usually limited to patients with 30% leakages around the esophageal circumference and without extensive necrosis of the gastric tube. Further, stent applications should be used in combination with drainage to prevent the aggravation of the infection and anastomotic tissue necrosis. If a stent treatment does not lead to any clinical improvement, the removal of the stent or surgical re-exploration should be considered.

Recently, endoscopic vacuum-assisted closure (E-VAC) therapy was introduced as a novel treatment for anastomotic leakages after esophagectomy; however, it has not been widely used due to a lack of corresponding equipment and experience (43,44). We conducted a search for a number of terms, including “esophagus,” “esophageal,” “esophagectomy,” “anastomotic leakage,” “endoscopic VAC,” “negative pressure therapy”, in the PubMed database, and found that only a few articles on E-VAC have been published. In a VAC acts, a vacuum device is applied to the wound via a vacuum-sealed sponge. The vacuum drainage can be positioned through the defect into the extraluminal wound cavity. The intraluminal vacuum drainage is connected to an electronically controlled vacuum device, and a continuous negative pressure of 100–125 mmHg is maintained for several days. The esophageal lumen or wound cavity then collapses around the drainage, resulting in an intraluminal evacuation and the closure of the defect. The sponge continuously removes wound secretions and interstitial edemas, improves microcirculation, promotes granulation tissue formation, and thus results in the healing of leakage. E-VAC is an effective treatment method for intrathoracic anastomotic leakages and has been shown to be more effective than stent implantation (45,46). The combination of E-VAC and stent application represents a successful and novel method for improving the healing rates of intrathoracic anastomotic leakages (47). However, E-VAC is more suitable for early and relatively small anastomotic leakages and perforations (48). Further, it should be noted that the efficacy of E-VAC in treating anastomotic leakages requires further study.

Conflicts of Interest: All authors have completed the ICMJE uniform disclosure form (available at http://dx.doi.org/10.21037/jgo-21-45). The authors have no conflicts of interest to declare.