Colon neuroendocrine tumors (C-NETs) are a series of rare and highly heterogeneous neoplasms, accounting for approximately 0.3% of all colon malignancies (1). Neuroendocrine tumors (NETs) are derived from the diffuse neuroendocrine cell system which is made up of cells that release hormones in response to signals from the nervous system. The clinical course of these diseases varies widely from asymptomatically indolent lesions to fatally aggressive ones with carcinoid syndrome. Most patients are small in size and have no obvious symptoms. If the tumor grows to a certain size or grows in a special location, it can often cause intestinal dysfunction, abdominal pain or obstruction symptoms of different degrees. However, these symptoms were not significantly different from those caused by colorectal adenocarcinoma in the same location.

Therefore, a precise staging system is pivotal for perfecting outcomes by more accurately stratifying, hence more appropriately and correctly delivering treatment to high-risk patients to prevent recurrence or mortality. However, the current widely-used TNM staging system proposed by two societies, the European Neuroendocrine Tumor Society (ENETS) and the American Joint Committee on Cancer (AJCC), roughly classifies C-NETs into two groups, N1 or N0. The classification is with the presence or absence of regional lymph node (LN) involvement, instead of giving precise N staging information (2,3). Obviously, prognostic heterogeneity should not be neglected among individual patients (e.g., N1 stage); yet, further precise stratification of patients in this group is warranted. Recent studies on many other NETs and solid tumors, including gastrointestinal and breast cancers, have unequivocally validated the importance of the number of positive lymph nodes (LNs) and the ratio between positive nodes and removed nodes (LNR) in determining patient outcomes (4-8). However, it remains unclear whether these two factors provide additional prognostic information for patients with C-NETs owing to the low intrinsic incidence of this disease. In this study, we hypothesized that higher LNs and LNR levels are associated with worse prognosis, and we used the National Cancer Institute’s Surveillance, Epidemiology, and End Results (SEER) database to investigate the predictive power of these two parameters among patients with C-NETs.

We present the following article in accordance with the STROBE reporting checklist (available at http://dx.doi.org/10.21037/jgo-20-444).

The study cohort was found from the SEER registry of the National Cancer Institute. Our cohort was restricted to patients with histologically confirmed NETs of the colon (C18.0–C18.9, excluding the appendix), corresponding SEER ICD-O-3 histology codes 8150 to 8156, 8240 to 8250, and 9091 (4,9,10). To eliminate most of the pediatric tumors, we omitted patients aged 18 and younger from the analysis. We also excluded patients with prior history of malignancies; those are receiving neoadjuvant radiotherapy or those with unknown neoadjuvant radiotherapy status; cases from nursing homes, autopsies, and death certificates; those with distant metastasis; and cases that lack detailed information on regional lymph nodes, including the number of LNs harvested and the number of LNs involved. We further limited our analysis to surgically resected (segmental, hemicolectomy, or total colectomy) cases and excluded those who had no cancer-directed surgery or those with no information on whether cancer-directed surgery performed, and those who had local excision. To identify the surgery procedure, we reviewed the SEER data using the SEER “site-specific surgery” variables for 1988 to 1997 (surgery codes 30–70) and “surgery of primary site” variables for 1998 to 2011 (surgery codes 30–80). Please refer to Table S1 for more details. Finally, 1,242 patients were included, forming 391 stage N0 patients and 851 stage N1 patients. Patients with N0 constituted the reference group. We also found stage IV patients as another reference group. After excluding the patients with primary lesions located in the appendix, those younger than 18 years of age, and those with a previous history of other malignancies, we had another control group with 1,032 patients. Individual stages were assigned for each patient after combining T, N, and M categories with ENETS/AJCC proposed TNM staging classification. Colon cancers are further divided into the proximal colon (cecum, ascending colon, hepatic flexure, and splenic flexure) and distal colon (descending and sigmoid colon) (11). The patient selection flow chart is shown in Figure 1. The institutional ethics review board approved this study of HwaMei Hospital (Ningbo No. 2 Hospital), Ningbo, China. The study was conducted in accordance with the Declaration of Helsinki (as revised in 2013). 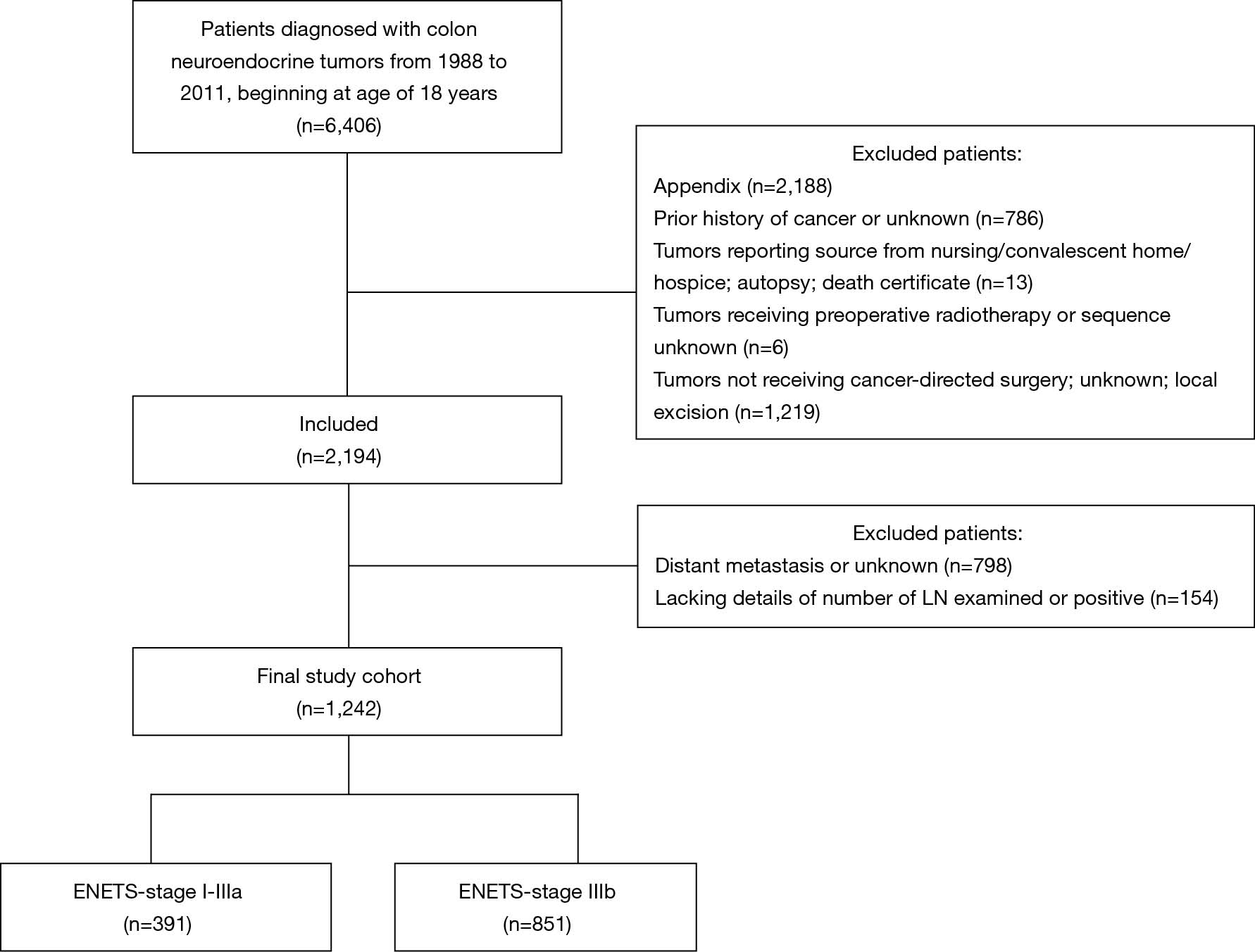 The distribution of continuous variables is reported as the mean value and standard deviation. Categorical data are presented as numbers and proportions. The optimal thresholds of LNs and LNR were calculated by Harrell’s C statistic (C-index) (12,13), and we suggested ≤4, >4–10, >10–13, and >13 for LNs-based classification (Table S2); and ≤0.51, >0.51–0.71, and >0.71 for LNR-based categories (Table S3) Since we could not find the optimal cutoff number for LNs harvested, we categorized it into three groups as ≤10, >10–15, >15, according to a previous study (6). Comparisons among subgroups of continuous data were tested with the Kruskal-Wallis rank-sum test for any non-normal distribution. Chi-square test or Fisher’s exact tests were used for categorical data comparisons, as necessary. The cancer-specific survival (CSS) was considered the primary endpoint of this study. Kaplan-Meier method and log-ranking tests were used to evaluate the difference in survival time among curves, and after excluding missing data on demographics and pathology results, a stepwise Cox proportional hazard regression was performed for multivariate survival analysis. All tests were two-sided and statistical significance was set at P<0.05. All the statistical analyses were performed using R software ver. 3.1.3 (http://www.R-project.org) with libraries for survival, rms, dynpre, and compare C and SPSS version 17.0 for Windows (SPSS Inc. Chicago, IL, USA). 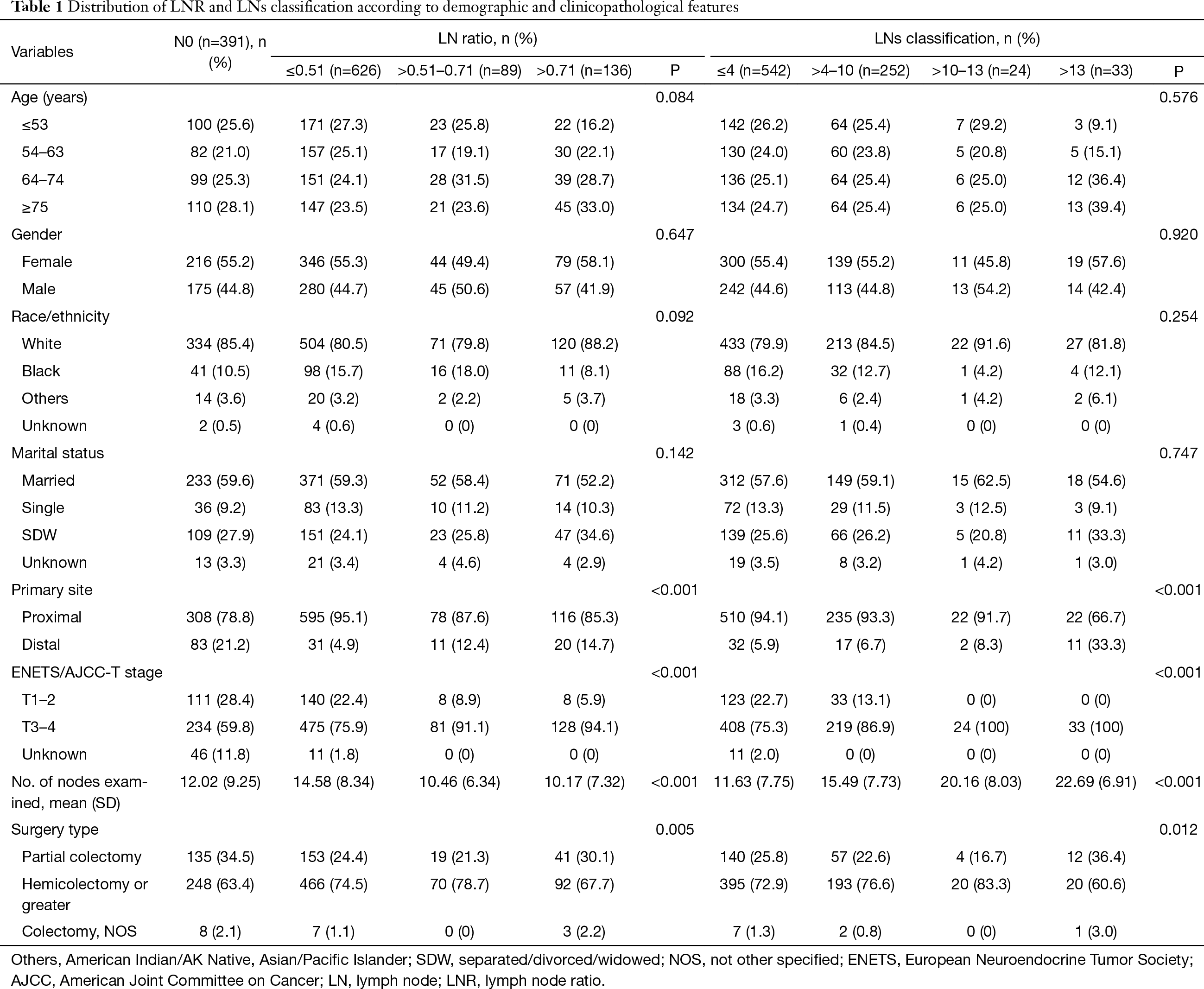 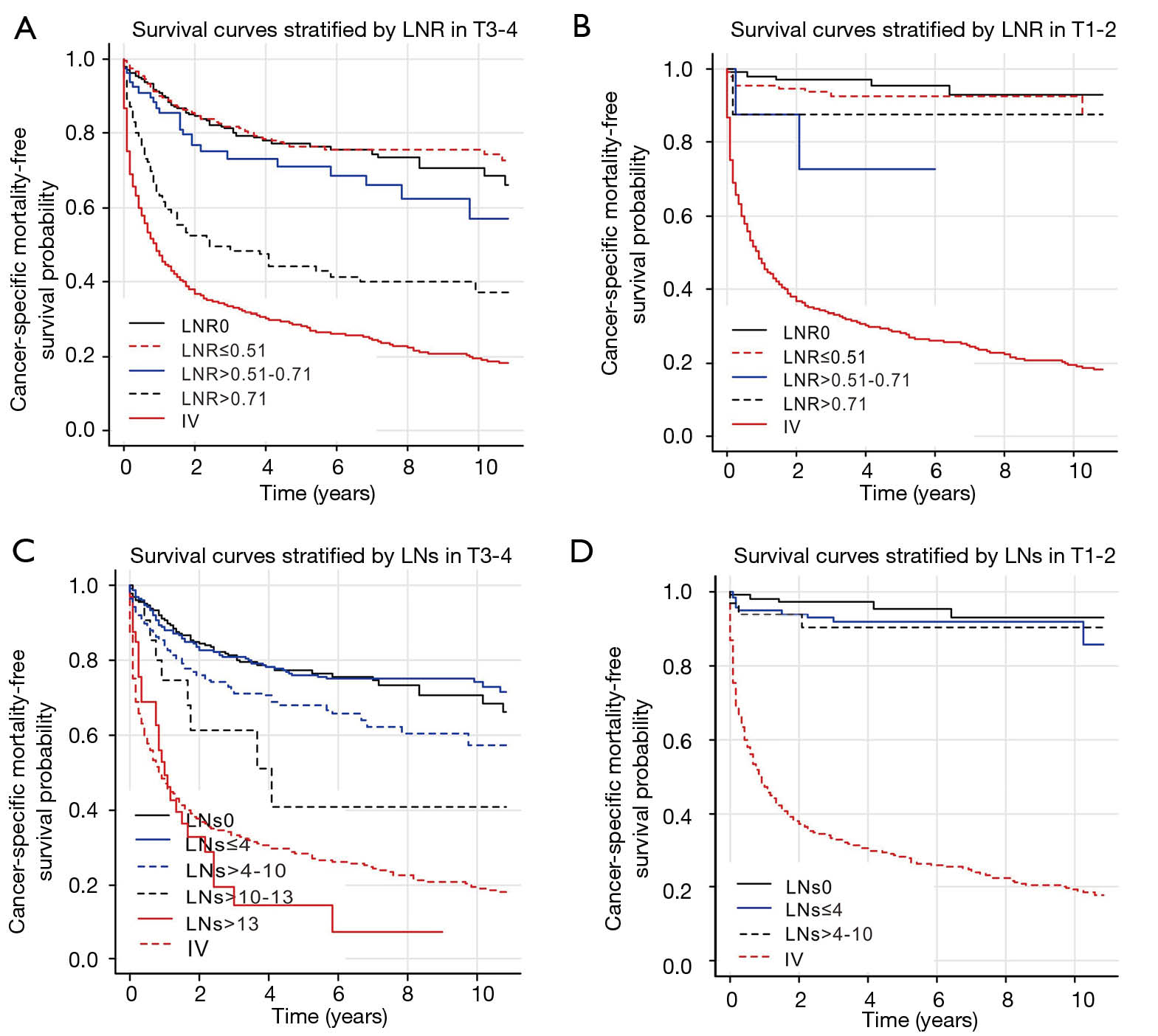 We surmised it was essential to evaluate the possible effect of the number of LNs removed or harvested on the survival rate. However, whereas to the earlier studies, we failed to demonstrate any positive effect (i.e., the greater the number of LNs resected, the better the prognosis). Therefore, an LNR-based system does not show higher prognostic validity than an LNs-based classification (Figure 4).

Currently, the presence of lymph node involvement has been demonstrated as a poor predictor for outcomes of C-NETs, and the two widely accepted tumor-node-metastasis staging systems uniformly classify patients with lymph node involvement into the stage IIIB group. However, advanced stratification of metastatic lymph nodes is indispensable for correct staging and prognostic estimation in clinical practice.

There is rapidly increasing evidence the number of positive LNs and LNR is an important determinant of prognosis in gastroenterological cancer. The current 7th edition of the AJCC staging system uses the number of positive lymph nodes further to divide the pN stage into many solid cancers. However, there has been no earlier report addressing the relationship between the extent of lymph node involvement and prognosis in C-NETs. To our knowledge, this is believed to be the first and largest retrospective study showing a prognostic significance of LNs and LNR for colon NETs patients.

LNR, as a reproducible and reliable prognostic indicator, was first described in gastric cancer studies (7,14-17). Recent evidence also implicated the LNR as a prominent prognostic factor, and it should be taken into consideration in the future for stratification schemes. Bando et al. (15,16) also demonstrated LNR-based classification, presented a superior capability of precisely staging and predicting survival compared with both the AJCC and JGCA proposed pN-based categories. The prognostic value of LNR in the colon was first proved by Berger et al. (6), who analyzed 3,759 stage II–III colon adenocarcinomas and stratified patients into four groups on quartiles (LNR ≤0.05, 0.05–0.19, 0.2–0.39, and >0.4). The 5-year cancer-specific survival rates were 79%, 73%, 63%, and 52%, respectively. Concerning NETs, Kim et al. (4) analyzed 2,984 patients with small intestinal NETs at the AJCC/ENETS IIIB stage and reported 10-year NET-specific survival as 85%, 77%, and 74% for patients in the ≤0.2, >0.2–0.5, and >0.5 LNR groups, respectively. Similarly, Tang et al. (5) analyzed 79 gastric neuroendocrine carcinoma patients who underwent D2 lymphadenectomy and reported that LNR was an independent prognostic factor, revealing significantly different prognoses between ≤10% and >10% of LNR. The limitation of using LNR was insufficient specific cutoffs reached by consensus, and the method used to find this threshold varied widely. In our study, a specific statistical method was used to determine the optimal cutoff; a series of log-ranking tests were performed, using successive LNR cutoffs (0.03 to 0.99), and the predictive efficiency of each cutoff was evaluated by the Harrell’s C statistic, which resulted in cutoff values of 0.51 and 0.71.

There have been two controversial views regarding the prognostic role of lymphadenectomy: (I) whether lymphadenectomy is only a tool for achieving more accuracy in staging with no therapeutic value, and (II) whether it is beneficial for prognosis (18). When many LNs were removed, it not only resulted in an incomplete excision of the tumor and draining area but also allowed for a thorough examination of the specimen and more accurate staging, which resulted in the prevention of stage migration, known as the Will Rogers phenomenon (19,20). There is consensus on the retrieval of at least 12 lymph nodes in colon adenocarcinoma. LNR, a single parameter combining both the number of lymph nodes evaluated and the positive nodes, is superior to the AJCC classification, specifically for those patients with inadequate LN resected (7,15,16). In our study, we did not ascertain the number of LNs removed as a significant variable affecting survival. Although the predictive ability of LNR categories was always higher than the LNs categories, the p values between them were insignificant regardless of the minimal number of LNs removed. The LNR-based system also did not show superiority to LNs-based classification even when we limited our analysis to patients with T3–4 (Figure S1).

There are some intrinsic limitations of using the SEER database. First, the database lacks information on preoperative chemotherapy that affects the amount of lymph node metastasis, thereby influencing the lymph nodes removed. Secondly, information on tumor proliferative ability evaluated by either Ki-67 index or mitotic count was unavailable in the database. The goodness of fit for the Cox model and the value of the C-index might be increased after considering these two parameters during multiple analyses. However, these indices were not assessed until 2010 (21), and most NETs located in the colon present a low-level of mitotic count and Ki-67 labeling index, suggesting that these two factors have a limited confounding effect on the entire model. Additionally, external validation using other cohorts is needed.

In general, our findings suggest the LNs-based and LNR-based classifications are significantly critical prognostic factors for NETs in the colon and serve as indispensable tools for further differentiation of the node-positive patients.

Reporting Checklist: The authors have completed the STROBE reporting checklist. Available at http://dx.doi.org/10.21037/jgo-20-444

Conflicts of Interest: All authors have completed the ICMJE uniform disclosure form (available at http://dx.doi.org/10.21037/jgo-20-444). The authors have no conflicts of interest to declare.

Ethical Statement: The authors are accountable for all aspects of the work in ensuring that questions related to the accuracy or integrity of any part of the work are appropriately investigated and resolved. The institutional ethics review board approved this study of HwaMei Hospital (Ningbo No. 2 Hospital), Ningbo, China. The study was conducted in accordance with the Declaration of Helsinki (as revised in 2013). The written informed consent was waived due to the retrospective nature of the study.