Gastric signet-ring cell carcinoma (SRCC) is an exceptional subtype of gastric adenocarcinoma which has abundant intracellular mucin accumulation and the crescent-shaped nucleus are displaced toward one side of the tumor cells (1). According to World Health Organization (WHO) classification: gastric cancer (GC) pathologic specimen with at least 50% of signet-ring cell is defined as SRCC. In recent decades, the overall morbidity of GC decreased worldwide, however, the decline is mainly caused by the decrease of intestinal type, while for diffuse type, especially gastric SRCC, is on the rise (2-4). Usually, SRCC is more prone to invasion and metastasis and have unique chemosensitivities, which led to a worse prognosis (3,5,6). However, SRCC treatment regimen are still controversial as SRCC is not specifically identified in most studies. For diffuse type GC, targeted therapies including anti-HER2 (7) and anti-VEGFR2 (8) provide few benefit in overall survival (OS). Immunotherapy may be a promising treatment as PD-L1 is overexpressed in about 23% of gastric SRCC (5).

CLDN18.2 is a splice variant of the membrane epithelial tight junctions protein Claudin18 (CLDN18) and has been identified as a promising biomarker for targeted therapy (9). CLDN18.2 has a restricted expression profile in normal tissues, it physiologically expresses only in the tight junction supramolecular complex of gastric mucosa. While upon malignant transformation, the changes in cell polarity lead to the exposure of CLDN18.2 epitopes (10), which are suitable for targeted therapy. Prior evidence demonstrates that except for GC, CLDN18.2 is aberrantly expressed in various primary tumors and metastases, including pancreatic, biliary, ovarian, and lung adenocarcinomas (11-14), which makes CLDN18.2 a pan-cancer target. At present, antibody [zolbetuximab (10,15-18), formerly called IMAB362] and chimeric antigen receptor engineered T cells (CAR-T) (19,20) targeting CLDN18.2 has been applied in clinical trials with promising results achieved. Correlation between higher CLDN18.2 expression and better therapeutic benefits has been found through antibody-based clinical trials. Previous studies have reported a relatively high expression rate of CLDN18.2 in diffuse type GC (9,21), however, no study on advanced gastric SRCC has been conducted. Therefore, this study aimed to establish the prevalence of CLDN18.2 expression in advanced gastric SRCC, and to determine the therapeutic value of CLDN18.2 in this specific type of GC.

A total of 105 formalin-fixed, paraffin-embedded (FFPE) tissue specimens with histology of advanced gastric SRCC for the testing of CLDN18.2 expression were collected at Nanjing Drum Tower Hospital. Patients at stage III were all administrated first-line 5-FU-based adjuvant chemotherapy after D2 gastrectomy, while patients at stage IV were treated by first-line 5-FU-based palliative chemotherapy. None of the patients had radiotherapy, chemotherapy or other medical intervention before specimen collection. Samples from stage III patients were curative surgical specimens, while samples from stage IV patients were palliative surgical specimens or gastroscope specimens. OS data was available in 86 cases; 61 of the tissues were selected for NGS.

All tissue samples were stained using rabbit monoclonal anti-CLDN18.2 antibody (Abcam, 222512) at 1/800 dilution. This antibody was designed to recognize human CLDN18.2 aa 1–100. After diluted antibody was added to the whole tissue surface, the slides were incubated at 4 °C overnight. Slides were then rewarmed at room temperature for 10 minutes and sufficiently washed with PBS for three times. Goat Anti-Rabbit IgG H&L (HRP) (Abcam, 205718) were used as secondary antibody, when the slides were dry, secondary antibody were dropped to cover the whole tissue and incubate in a 37 °C incubator for 30 minutes. Nuclear were stained with hematoxylin; 3% hydrogen peroxide were used to block endogenous peroxidases. Each patient’s slides were tested twice.

The pathological diagnosis of SRCC in our study were confirmed by two independent pathologists. The interpretation of IHC results were performed according to the FAST criterion.

SPSS was used for all statistical analysis. GraphPad Prism 7.0 (GraphPad Software) was used for presenting the statistical result graphs. Survival analysis were obtained using the Kaplan-Meier method and compared with the log-rank test. Fisher’s exact test were used to determine NGS results. A P value of less than 0.05 was considered significant.

The study was approved by the Ethics Committee of Nanjing Drum Tower Hospital (No. 2016-196-01). The study was conducted in accordance with the Declaration of Helsinki (as revised in 2013). Because of the retrospective nature of the study, the requirement for informed consent was waived. 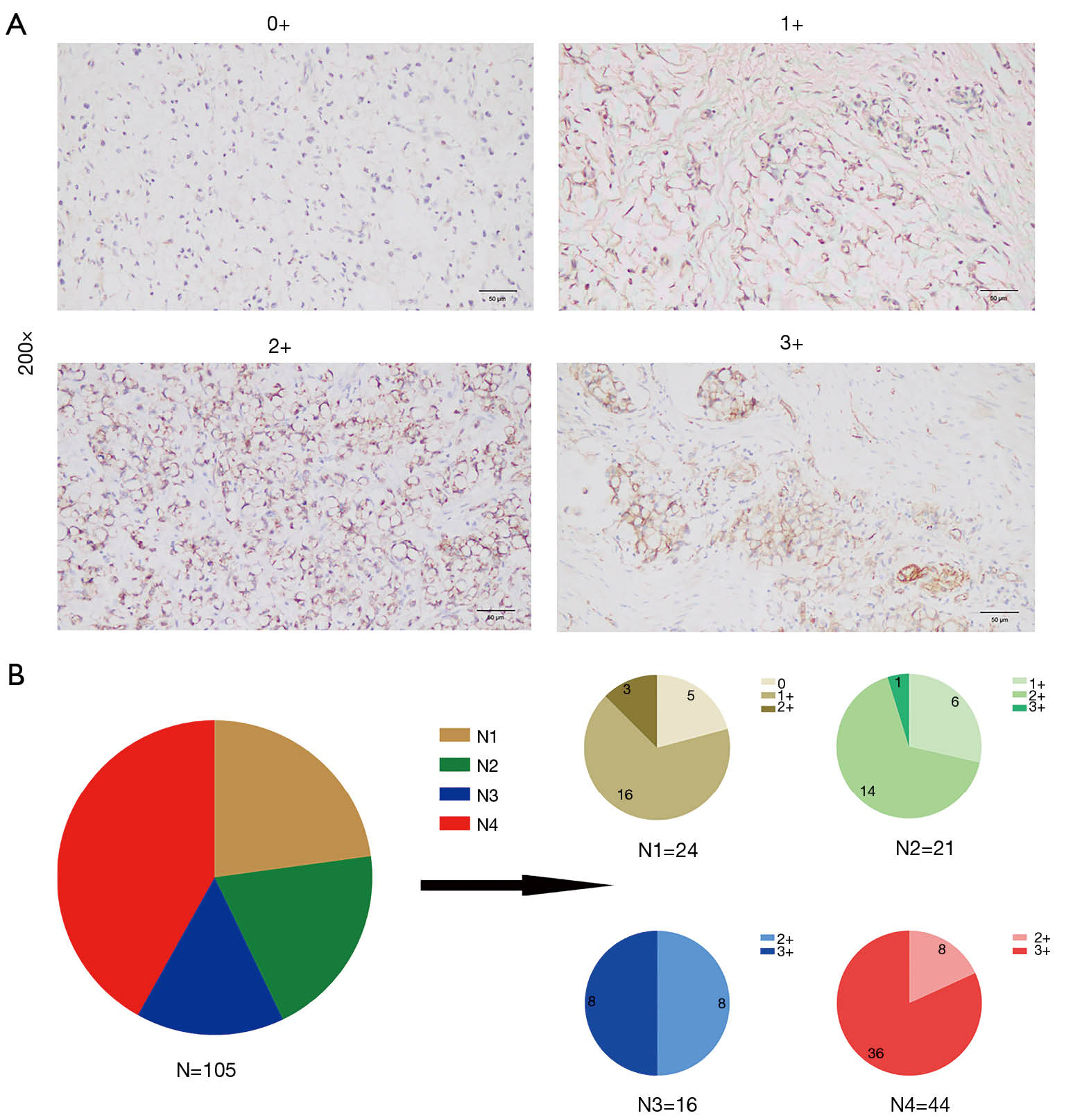 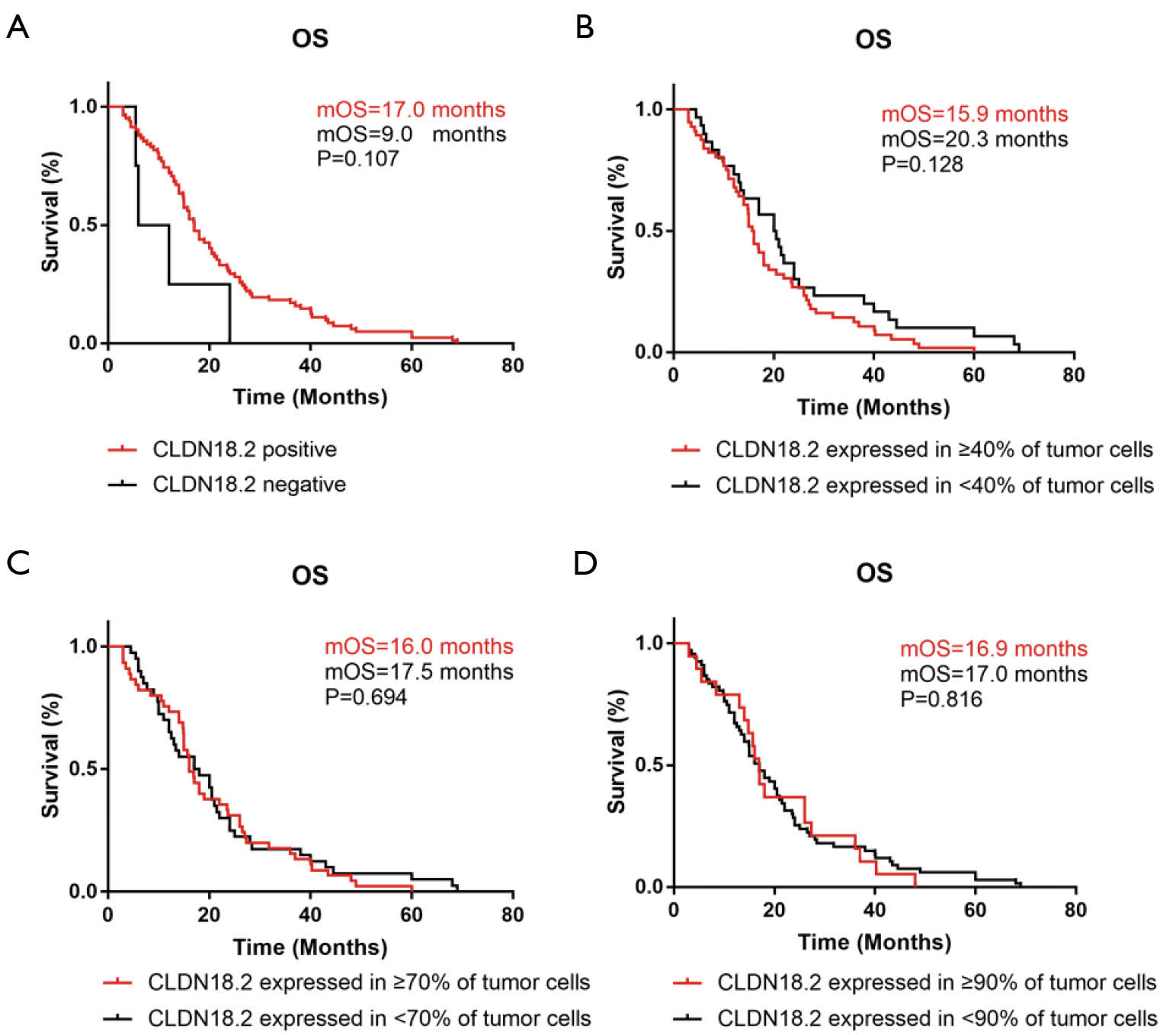 To explore the relation between CLDN18.2 expression and genetic abnormalities, 61 specimens were examined using a gene panel that covers entire exons in 416 cancer-relevant genes (Table S2). Genetic aberrations identified in all 61 samples revealed several common SNVs and CNVs in advanced gastric SRCC (Table S3 and Table S4). Briefly, the top 5 genes with the highest SNVs rate were TP53 (26.2%), CDH1 (19.7%), MED12 (18.0%), PKHD1 (18.0%) and ARID1A (11.5%). The top 2 genes with the highest CNVs rate were NOTCH1 (18.0%) and FLT4 (9.8%). Furthermore, specimens for NGS were divided into two groups based on CLDN18.2 expression. Of them, 15 were CLDN18.2 expressed in <40% of tumor cells, 46 were CLDN18.2 expressed in ≥40% of tumor cells. After the analyses of genetic aberrations in these two groups, one gene named GRIN2A were found significantly different between the two groups (Figure 3, Table S5 and Table S6). Three (20.0%) of the 15 samples that had CLDN18.2 expression in <40% of tumor cells harboring GRIN2A mutation, while only 1 (2.2%) of the 46 moderate-to-strong CLDN18.2 expression samples had GRIN2A mutation (P=0.043), indicating GRIN2A variation was more likely to occur in patients who had lower CLDN18.2 staining. Since anti-CLDN18.2 antibody was not effective enough in CLDN18.2 low expression patients, mutant GRIN2A might be a potential therapeutic target in those patients. Other detected SNVs (MED12, TOP2A, EZH2, RNF43, WRN, STAG2, CDK6, CYLD and GATA6) or CNVs (CDK12, CCNE1, ERBB3, FGFR4 and MED12) were not statistically significant (Figure 3, Table S5 and Table S6). 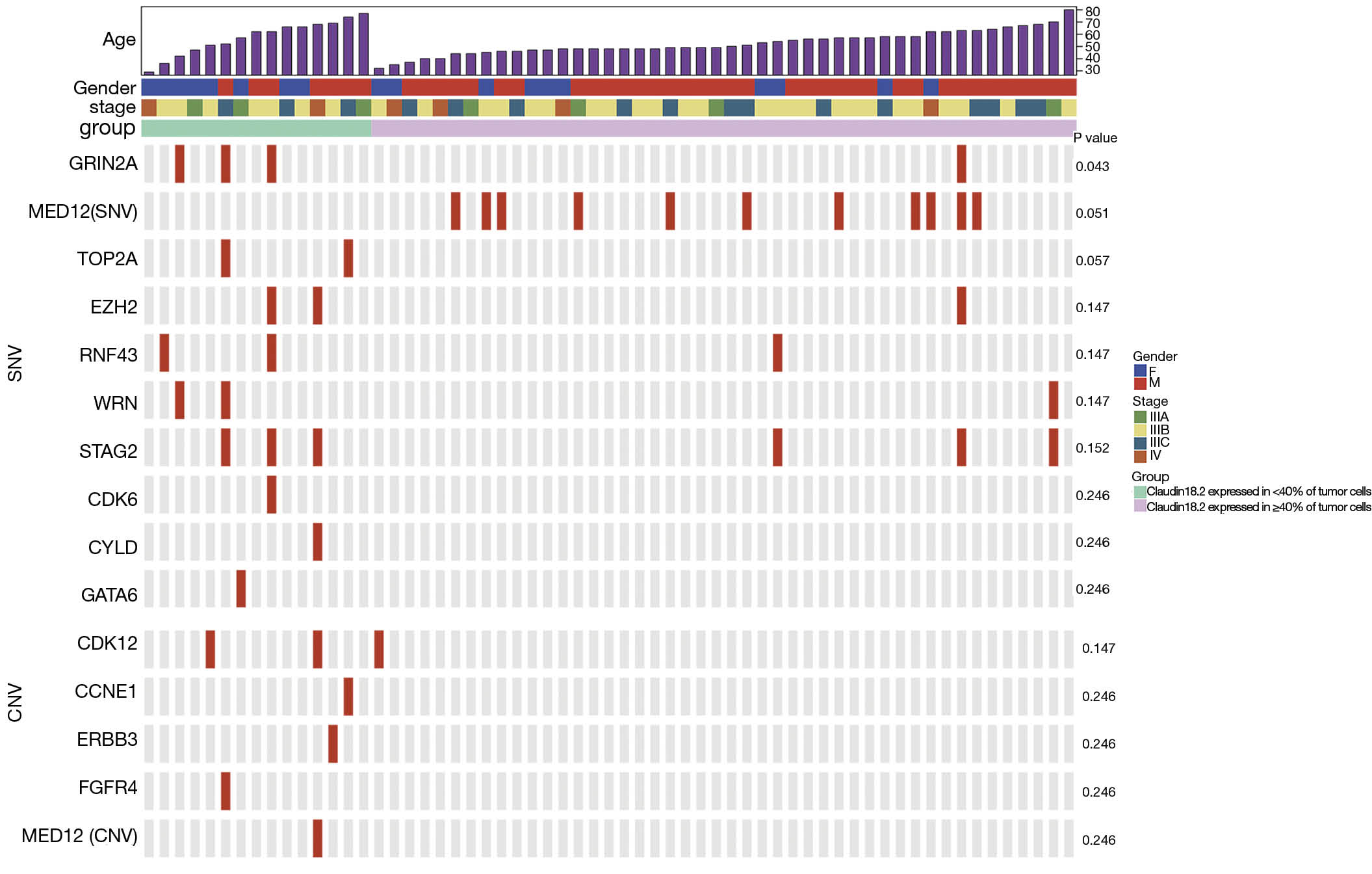 In this study, we first tested CLDN18.2 expression in 105 FFPE tumor tissues from advanced SRCC patients by IHC method. The results demonstrated that CLDN18.2 was highly expressed in gastric SRCC, which made a promising prospect for the clinical use of zolbetuximab in advanced gastric SRCC. Survival analyses based on different grouping patterns showed no significance between CLDN18.2 expression and OS. In addition, NGS found that GRIN2A mutation was related to CLDN18.2 expression level.

CLDN18.2 had been identified as a highly selective cell lineage marker since its expression in normal tissues was strictly confined to differentiated epithelial of the gastric mucosa. Besides, the retained expression of CLDN18.2 had been found in a significant proportion of primary GCs (any positive 77%, ≥2+ in ≥60% of cells 56%) and its metastases (lymph node 66%, ovarian 96%), which made CLDN18.2 become one of the most notable targets in GC studies (9). Zolbetuximab (IMAB362) was a first-in-class monoclonal antibody specific targeted to CLDN18.2, recently, a multicentre phase II clinical study of zolbetuximab found that all responders had ≥70% CLDN18.2 expression in tumor cells, which suggested the correlation between higher CLDN18.2 expression and better therapeutic benefit (17). Besides, another phase II trial (FAST; NCT01630083) had shown that patients with ≥2+ membrane staining intensity in ≥40% tumor cells could get benefits from zolbetuximab therapy (15). In this study, high expression rate of CLDN18.2 in advanced gastric SRCC patients had been found for the first time. Significant difference of CLDN18.2 expression between primary GCs and advanced gastric SRCC (77% vs. 95.24%) hinted that CLDN18.2-based targeted therapy had great potential in the treatment of advanced gastric SRCC. Moreover, since PD-L1 overexpressed in gastric SRCC (5), antibodies targeting PD-1/PD-L1 combined with CLDN18.2 antibody zolbetuximab might be an effective treatment for advanced gastric SRCC.

In the survival analyses, 4 grouping patterns were set up according to the percentage of overall CLDN18.2 positive cells. However, no relationship had been found between OS and CLDN18.2 expression, which exactly indicated that the high expression of CLDN18.2 was irrelevant to a poor prognosis in advanced gastric SRCC. No survival analysis of CLDN18.2 expression in advanced gastric SRCC has been reported before, however, some previous studies on general GC suggested that as disease progressing, the expression of CLDN18.2 decreasing, which contributed to the increased invasive potential of the tumor cells (22,23). However, according to FAST clinical trial and other studies (9,21), no significant correlation between the expression of CLDN18.2 and the progression or prognosis of GC had been found, which consisted with our findings. According to TCGA database (Figure S1), no statistical difference in OS was discovered between CLDN18.2 high and low expression groups as well (P=0.14), however, disease free survival (DFS) was statistically significant in those two groups (P=0.0062), which indicating CLDN18.2 high expression might be related with the progression of the disease. Further studies were needed for clarifying the role of CLDN18.2 in the prognosis of GC.

NGS was performed to explore the genomic landscape for advanced gastric SRCC and to discover the correlated genes in different CLDN18.2 expression groups. Our results confirmed several common gene abnormalities in advanced gastric SRCC, such as TP53, CDH1, MED12, PKHD1, ARID1A and NOTCH1. We also found that CLDN18.2 expression might have some relation with GRIN2A mutation. GRIN2A was the encoding gene of GluN2A, which was a subunit of the N-methyl-D-aspartate receptor (NMDAR) (24), and participated in the transport of calcium ions. GRIN2A was one of the key genes in epilepsy researches, however, only a few researches had been done on GRIN2A in cancer field. The existing studies had shown that GRIN2A mutation was frequently found in melanoma (25) and induced the loss of tumor suppressor function (26,27). Besides, NMDAR signal had been found to be related with brain metastasis of breast cancer (28). Here, in our study, we found for the first time that GRIN2A mutation had some potential relation with CLDN18.2 expression in advanced gastric SRCC. GRIN2A mutation was enriched in patients with lower CLDN18.2 expression, indicating NMDAR inhibitors were probably useful in those patients. However, supporting evidence seems relatively weak due to the small sample size of GRIN2A mutation in our study, further and more comprehensive researches were needed to clarify the relevant mechanism.

We acknowledge and appreciate our colleagues for their valuable efforts and comments on this paper.

Funding: This work was funded by grants from the National Major Projects for Major New Drugs Innovation and Development (2019ZX09301-150) and Fund for Distinguished Young Scholars of Jiangsu Province (BK20190001).

Reporting Checklist: The authors have completed the MDAR reporting checklist. Available at http://dx.doi.org/10.21037/jgo-20-344

Conflicts of Interest: All authors have completed the ICMJE uniform disclosure form (available at: http://dx.doi.org/10.21037/jgo-20-344). The authors have no conflicts of interest to declare.

Ethical Statement: The authors are accountable for all aspects of the work in ensuring that questions related to the accuracy or integrity of any part of the work are appropriately investigated and resolved. All experimental methods were carried out in accordance with the approved guidelines. This study was conducted with the approval of the Ethics Committee of Nanjing Drum Tower Hospital (No. 2016-196-01). The study was conducted in accordance with the Declaration of Helsinki (as revised in 2013). Because of the retrospective nature of the study, the requirement for informed consent was waived.