The inhibitory effects of probiotics on colon cancer cells:in vitro and in vivo studies

Colorectal cancer (CRC) is the most common gastrointestinal malignancy. It is the third most common cancer in the world and the second cause of cancer-related mortality (1). The occurrence of CRC is associated with many factors, including low physical activity, obesity and a high body mass index (BMI), high-fat and low-fiber diets, alcohol consumption, smoking, the use of anti-inflammatory non-steroidal drugs, and family history (2). CRC is a type of solid tumor which tends to occur in older people, and surgery is the main form of treatment. In recent years, in addition to surgical treatment, the research and development of probiotics has provided novel therapies for the treatment of solid tumors.

Probiotics have been shown to have beneficial effects on human health, including antibacterial activity against intestinal pathogens, regulating blood cholesterol levels, reducing the incidence of colitis and inflammation, regulating the immune system, and preventing colon cancer (3). The International Scientific Association for Probiotics and Prebiotics (ISAPP) defined probiotics as “live microorganisms that, when administered in adequate amounts, confer a health benefit on the host” (4). Most probiotics are found in the natural intestinal flora, and the main component of probiotics is lactic acid bacteria (LAB). Lactobacillus and Bifidobacterium are the most common LAB. Many studies have shown that probiotics can treat a range of gastrointestinal diseases, such as acute diarrhea, antibiotic-associated diarrhea, functional digestive disorders, and inflammatory intestinal diseases, by affecting or even changing the intestinal flora (5). It can also participate in the dynamic balance and regulation of the intestinal epithelial system. Moreover, probiotics can affect the quality and quantitative composition of intestinal ecosystems (4).

Research has shown that the immunomodulatory and anti-tumor effects of probiotics are particularly remarkable. There has been increasing evidence to support the feasibility of immunotherapy as a promising therapeutic strategy for the treatment of solid tumors (6). One report showed that the appropriate regulation of intestinal microbiota through the intake of specific probiotics may help to prevent tumor formation (7). L. plantarum has been shown to inhibit the growth of CT26 colon carcinoma cells in subcutaneous tumor-bearing mice, most likely by changing the tumor microenvironment and promoting the migration of CD8 T cells and natural killer (NK) cells to the tumor tissue (8). Another study demonstrated that oral administration of L. casei induced a potent T helper 1 cell immune response and cytotoxic T cell infiltration in the tumor tissue of tumor-bearing mice, resulting in CT26 tumor growth inhibition (9).

We present the following article in accordance with the ARRIVE reporting checklist (available at http://dx.doi.org/10.21037/jgo-20-573).

Composition of the probiotic mixture

A probiotic mixture was provided by Hebei Inatural Biotech CO., LTD for free, that containing 30 billion colony-forming units (CFU)/g was used in these experiments. The mixture was composed of B. longum, B. bifidum, L. acidophilus, L. plantarum, resistant dextrin, isomaltooligosaccharides, fructose oligosaccharides, and stachyose.

The CT26 cells were evenly seeded into 6-well plates at 1×105 cells per well. The cells were then cultured at 37 °C in a 5% CO2 incubator for 14 hours to allow for cell adhesion to the wells. Cells in the probiotic mixture (PM) group were co-cultured with 2 mL of the probiotic mixture (1×108 CFU/2 mL) at 37 °C for 8 hours. The same amount of RPMI-1640 culture media supplemented with 10% FBS was added to the control (CTL) cells. Following co-culture for 8 hours, cells were harvested for further follow-up experiments.

For the colony formation assays, CT26 cells from the PM group and the CTL group were inoculated into 10 mm petri dishes (1,000 cells per dish) and cultured for 2 weeks. Subsequently, colonies were fixed with 4% phosphate-buffered formalin (pH 7.4) and stained with Giemsa’ staining solution (solarbio, Beijing, China) for 20 minutes. Colonies were assessed and quantified.

Following probiotic treatment or control treatment, the CT26 cells were harvested and seeded into 6-well plates at a density of 1×106 cells/well. After 24 hours, a single scratch was made in the layer of cells using the tip of a 200 µL fluid transfer gun. Cells were then rinsed with phosphate buffer saline (PBS). Photographs of cell migration across the scratched line were recorded at 0 and 48 hours using light microscopy.

Cell migration and invasion assays were performed using membranes with 8 µm pores (BD Biosciences, Franklin Lakes, NJ, USA). Prior to the assays, the chambers were taken out of the −20 °C storage environment and placed at 37 °C for 1 hour to allow the matrigel (354480; BD) to melt. Cells were resuspended in serum-free RPMI-1640 medium to give a suspension of 1×105 cells/100 µL. In a 24-well plate, 650 µL of 10% FBS RPMI-1640 medium was added to the bottom of the wells. The chambers were then gently transferred to the 24-well plate, and 100 µL of cell suspension was evenly distributed onto the basement membrane of the chambers and incubated at 37 °C. The chambers were taken out after 24 hours and the medial cells of each chamber were carefully wiped with a cotton swab and fixed with 4% formaldehyde solution. Samples were then stained with hematoxylin and eosin violet. Cells on the outer membrane of the chambers were observed under a microscope (×200 magnification), and the number of cells in 10 random fields of view were counted and averaged. Except for melting of the matrix, all other steps of the migration assay were identical to those of the invasion assay.

Transplanted tumor mouse model and administration of the probiotic mixture

Eight female BALB/c mice (6–8 weeks old, 20–25 g) were randomly separated into two groups with four mice in each group. To generate the transplanted tumor model, 1×106 CT26 cells were injected into the right groin of each mouse.

One group of mice were then administered the probiotic mixture (1×109 CFU/200 µL) by intragastric gavage, and the other group were administered the same volume of PBS. The former group was designated as the CT26 plus probiotic mixture (PM) group, and the latter was designated as the CT26 control group (CTL). All mice were raised in the same environment with adequate food and water.

During the experiment, the survival status of the mice was observed every day. At day 21, the mice were sacrificed by cervical dislocation. Tumor volume was measured using a digital vernier caliper and calculated using the following formula: V=1/2L×W2, where L = length, and W = width (10).

After the mice were sacrificed at the designated time, tissue samples, including the tumor and the spleen, were harvested. Tissue samples were fixed in 10% buffered formalin, embedded in paraffin, and sectioned. The sections were stained with hematoxylin and eosin (HE) and observed under light microscopy.

Cell viability was assessed using the CCK-8 assay kit. The absorbance of the cells was recorded at four different time points and the levels of cell proliferation were evaluated. The absorbance level of cells treated with the probiotic mixture was significantly lower than that of the control group, although the absorbance in both groups showed an increasing trend with time (P<0.05; Figure 1A). Furthermore, after 14 days, the colony formation assay revealed that the number of colonies in the PM group was significantly less than that in the CTL group (P<0.05; Figure 1B,C). These results demonstrated that the probiotic mixture had an effect on the long-term survival of CT26 cells. 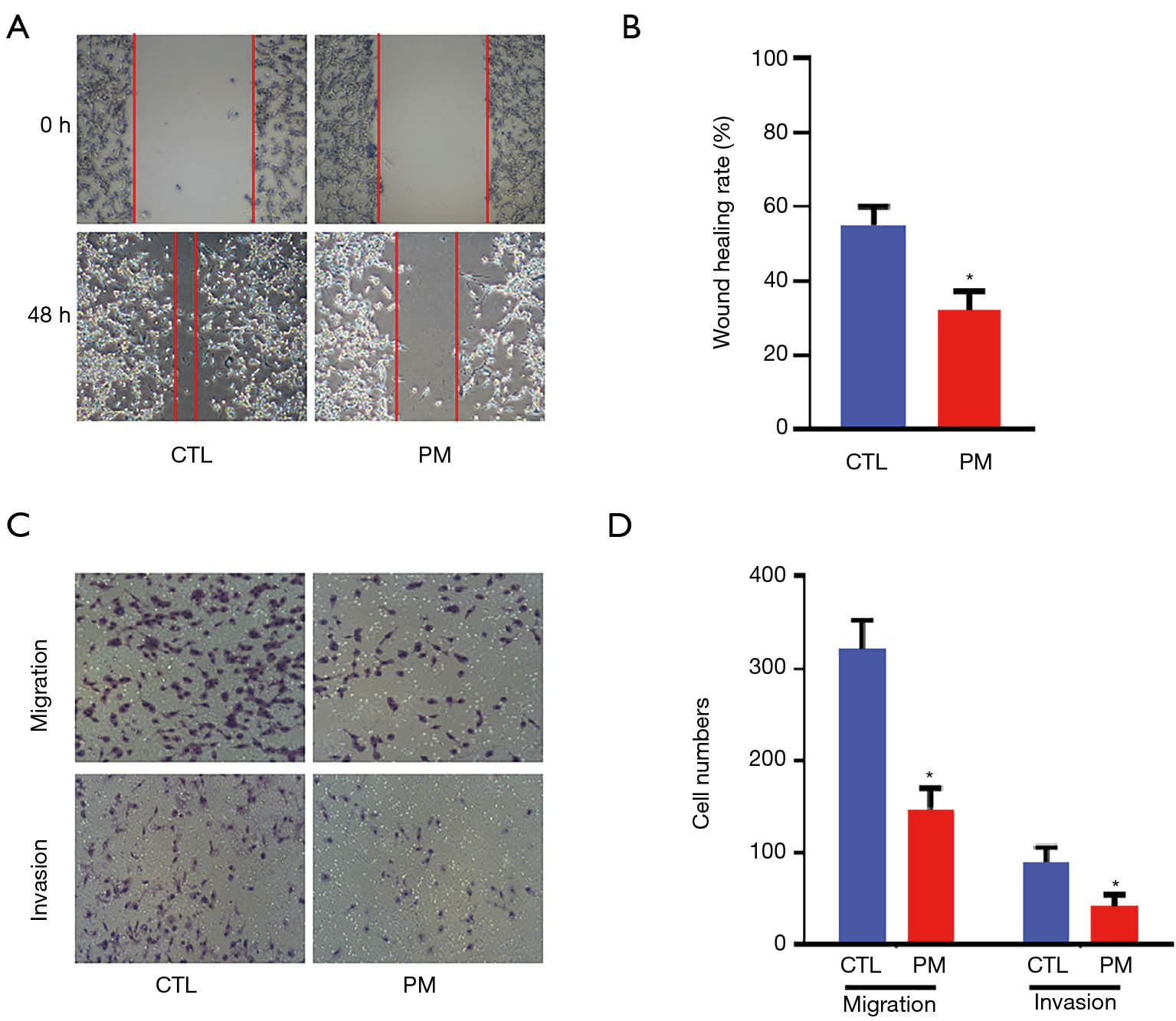 The probiotic mixture inhibited the tumor growth in vivo

The protective effect of the probiotic mixture against CT26-induced colon carcinoma was evaluated. On day 1, 1×106 CT26 cells were injected into the right groin of each mouse. Mice in the PM group received a daily oral dose of the probiotic mixture (1×109 CFU/200 µL) and the CTL group was given 200 µL PBS by gavage (Figure 3A). At day 21, mice from both groups were sacrificed and the tumors were isolated. As shown in Figure 3B and C, the tumors in the PM group were significantly smaller than that in the CTL group. Measurement of the tumor volumes revealed that the tumor volume in the mice treated with the probiotic mixture were significantly suppressed compared to the control mice. 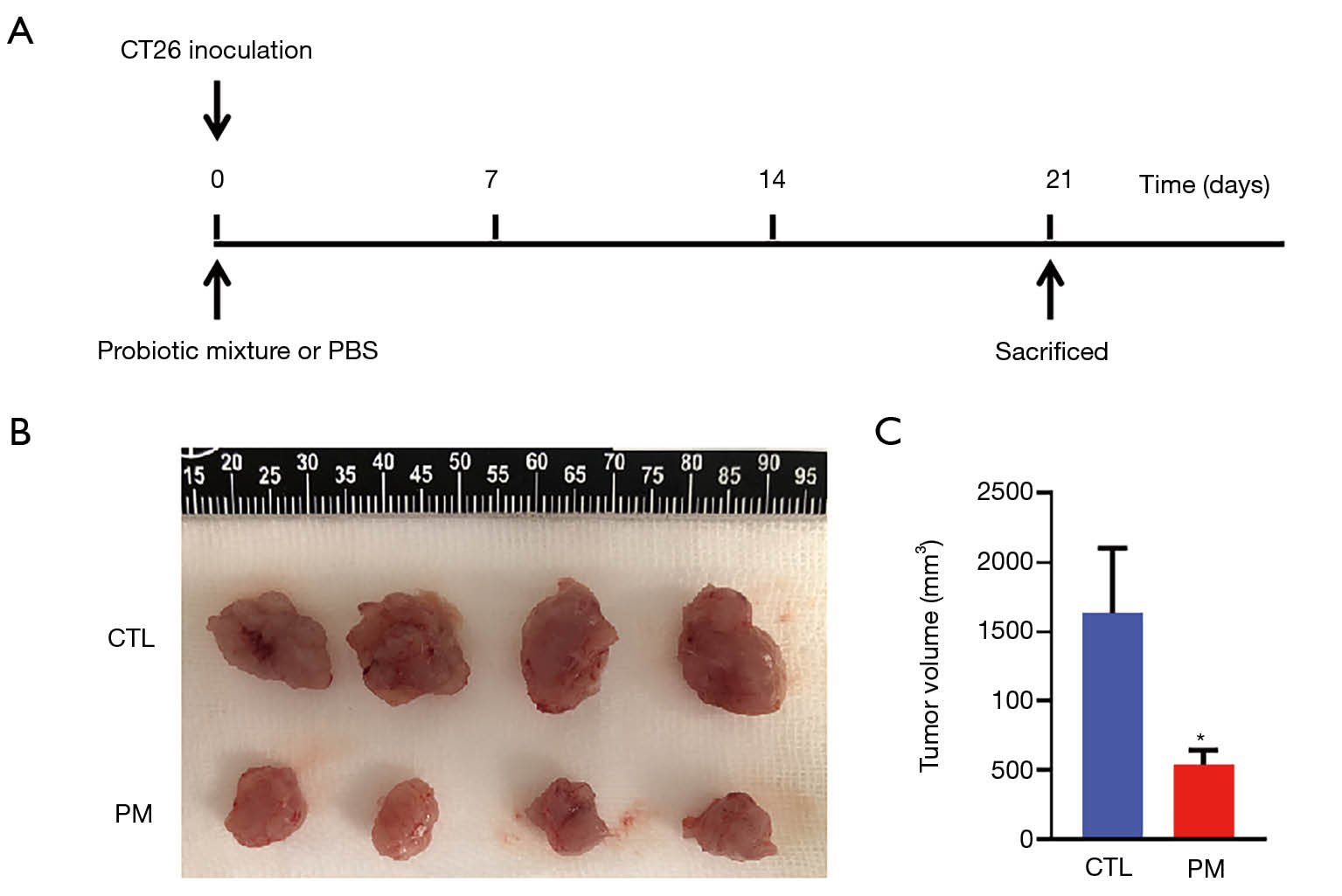 The tumor tissues and spleens were sampled from both groups of CT26 tumor-bearing mice to determine whether the probiotic mixture treatment induced any histopathological changes. HE staining revealed that compared to the control, a higher number of apoptotic cells was observed in the tumors of mice treated with the probiotic mixture (Figure 4A). Furthermore, immunohistochemical analyses of CD8 expression, the expression of CD8 in tumor and spleen were stronger than that in control group (Figure 4B). 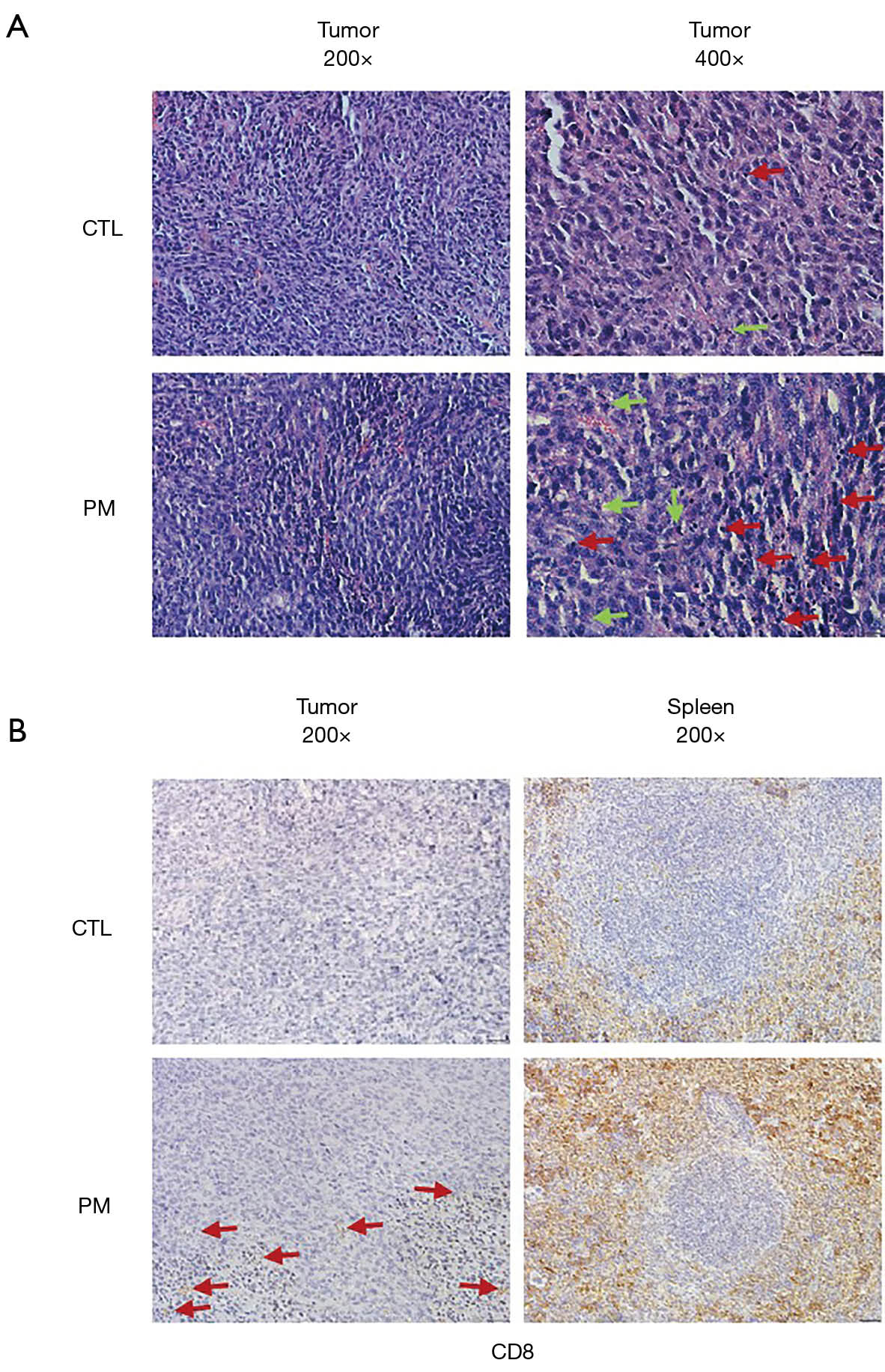 Figure 4 Representative HE and IHC in BALB/c mice tumor-bearing experiment. (A) Histopathological assessment with hematoxylin and eosin staining for tumors from both groups. Representative images of the necrosis of the tumors in each group of mice (200× or 400× magnification); the red arrows indicate tumour-infiltrating lymphocytes (TILs); the green arrows indicate apoptotic cell. (B) Representative images showing CD8 positive staining in the spleen tissues of mice treated with PBS control or the probiotic mixture (200× magnification).

CRC is a life-threatening disease and its rate of fatality remains high. The incidence of CRC has been associated with environmental and genetic factors, and has been linked with inflammatory bowel disease (IBD) and intestinal flora (11). Studies have shown that probiotics can regulate the microbiota of the intestinal tract and inhibit the progression of cancers (12). This suggests that there is a special connection between probiotics and CRC. In fact, numerous studies have demonstrated the anti-tumor effects of probiotics such as L. acidophilus, L. casei, L. plantarum, and B. longum (13,14). However, before a specific probiotic strain can be considered part of a cancer treatment regimen, its function needs to be assessed in detail (15). In this study, a probiotic mixture, including B. longum, B. bifidum, L. acidophilus, and L plantarum, was selected. The effects of this probiotic mixture on CT26 colon carcinoma cells were explored both in vivo and in vitro.

Herein, we demonstrated that the probiotic mixture used in this investigation activated more CD8 cells, and retarded and inhibited the growth of CT26 tumors. Moreover, the probiotic mixture also inhibited the invasion, migration, and proliferation capabilities of CT26 cells. Our results suggested that a variety of probiotics can work together to raise an immune response and inhibit tumor growth, and thus, probiotics may be an effective novel anticancer agent for future therapeutic regimens.

Reporting Checklist: The authors have completed the ARRIVE reporting checklist. Available at http://dx.doi.org/10.21037/jgo-20-573

Conflicts of Interest: All authors have completed the ICMJE uniform disclosure form (available at http://dx.doi.org/10.21037/jgo-20-573). The authors have no conflicts of interest to declare.

Ethical Statement: The authors are accountable for all aspects of the work in ensuring that questions related to the accuracy or integrity of any part of the work are appropriately investigated and resolved. Animal experiments were reviewed and approved by the Animal Committee of the First Hospital of Hebei Medical University (License number 20200326) and guidelines for the care and use of animals were followed.