Intussusception represents an uncommon condition of bowel obstruction in adult patients compared to the pediatric population. The main causes for this condition in childhood are usually benign and primary and the treatment of choice is pneumatic or hydrostatic reduction of the intussusception which is sufficient in 80% of these patients. In adults, only 1-5% of intestinal obstructions are caused by intussusception and in 90% of all patients the main reason for this condition is caused secondarily by a benign or malign pathology. Approximately 65% of intussusceptions are caused by malignancies and therefore a preoperative pneumatic or hydrostatic reduction followed by surgical resection is discussed controversially due to oncological reasons (1-3).

The mechanism of bowel intussusception due to pathological lesions can be explained by the irritation of normal peristalsis initiating invagination of one segment of the bowel into another, resulting in bowel obstruction and consecutive compromised vascular flow in the intussuscepted segment. These conditions lead to bowel obstruction and consecutive bowel ischaemia respectively. The resulting clinical presentations may vary as acute or chronic symptoms in terms of abdominal pain and distension, nausea and vomiting, diarrhea, fever, palpable abdominal mass or bloody stool (3-5). In every case of clinical presentation, bowel intussusception should be kept in mind as a possible differential diagnosis.

In April 2012, a 40-year-old male patient was admitted to the emergency unit of our surgical department with a ten-day history of increasing colicky abdominal pain and constipation associated with nausea and vomiting. His medical history included poorly controlled type-1-diabetes, family history was normal especially for cancer diseases. Physical examination revealed the condition of an acute abdomen in terms of abdominal distension and rebound tenderness with a palpable mass in the right upper abdomen. Lab tests were at normal ranges except of elevated blood sugar, elevated inflammatory parameters and signs of septicaemia. Possible differential diagnoses were acute cholecystitis with or without perforation, colon or duodenal perforation in consequence of diverticulitis or duodenal ulcer. Moreover tumor perforation was kept in mind as a possible condition.

Abdominal X-ray showed an air-fluid-level in the stomach as well as in a bowel loop in the left upper abdomen as first indication for bowel obstruction (Figure 1). Ultrasonography detected a large tumor mass in the right upper abdomen with target signs; the additionally performed CT-scan showed typical signs of an ileocolic invagination with consecutive bowel obstruction of the jejunum and compromised mesenteric perfusion. Figures 2 and 3 demonstrate the terminal ileum and ileocecal valve telescoping into the right half of the transverse colon. Neither ultrasonography nor CT-scan detected possible reasons for intussusception. The clinical presentation of an acute abdomen combined with radiological signs of an ileocolic invagination with compromised vascular perfusion led to emergency surgery. 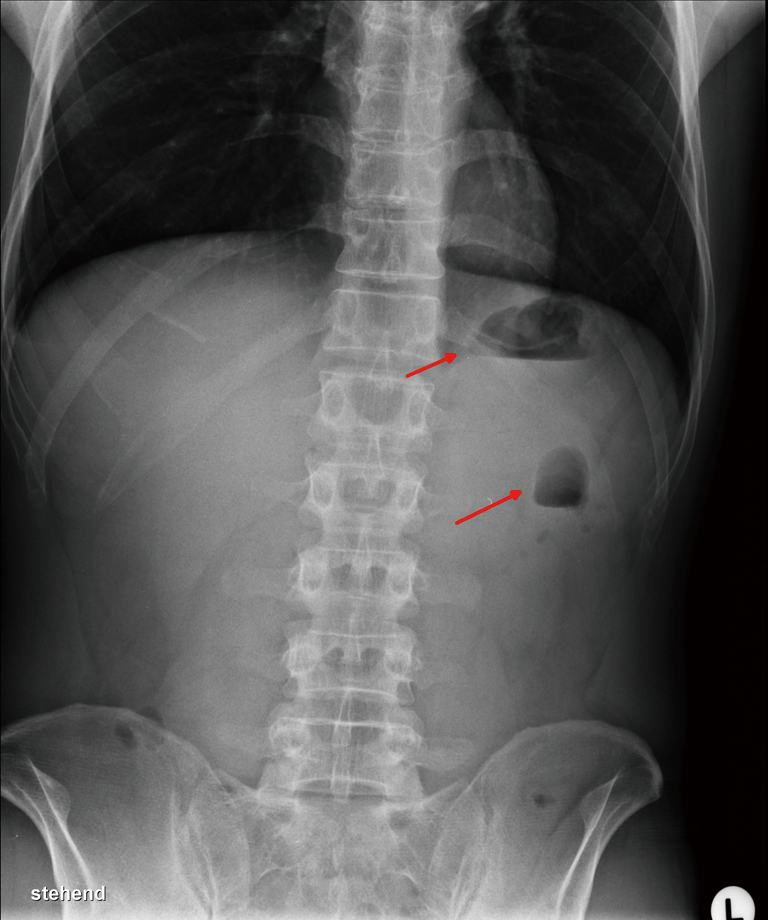 Figure 1 Air-fluid-levels (arrows) in a bowel loop and the stomach as signs of bowel obstruction. 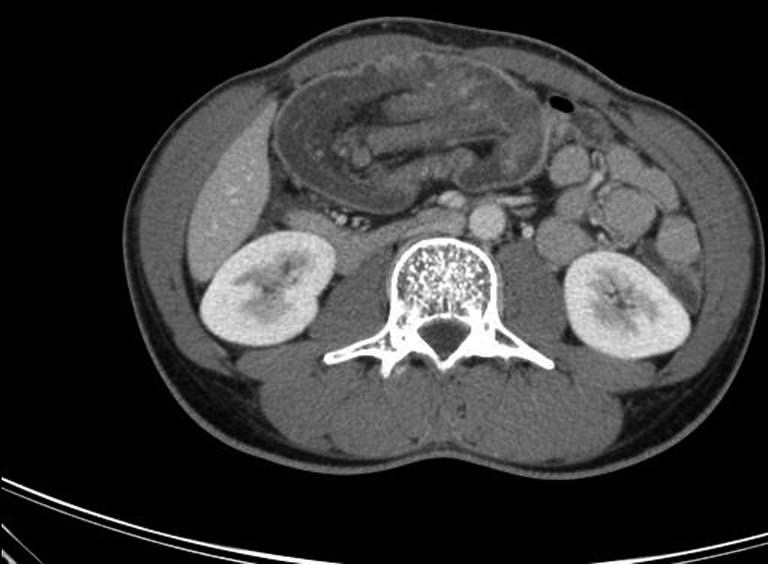 Surgical exploration revealed a massive tumor mass involving terminal ileum, ascending colon and the right part of transverse colon with consecutive ischemia of the involved bowel segments and peritonitis. Terminal ileum and ileocolic valve telescoped into the transverse colon and caused bowel obstruction. Extended right hemicolectomy was necessary to resect the whole intussuscepted bowel mass due to ischaemia and a side-to-side, hand-sewn ileocolic anastomosis was performed. After abdominal lavage and drainage by silicone tubes the abdominal cavity was closed primary and the patient was transferred to the intensive care unit. The postoperative course was unremarkable and the patient was discharged from hospital on the ninth postoperative day.

Histological examination of the specimen identified an adenocarcinoma of the ileocecal valve as underlying pathology of bowel intussusception (Figure 4). According to the International Union Against Cancer (UICC) tumor stage was UICC stage II (G3, pT3, N0, M0) and routinely oncological follow-up was recommended based on the decision of our institutional tumor board. Twenty months after surgery, follow-up examination including clinical examination, colonoscopy, CT-scan and lab tests were unremarkable. 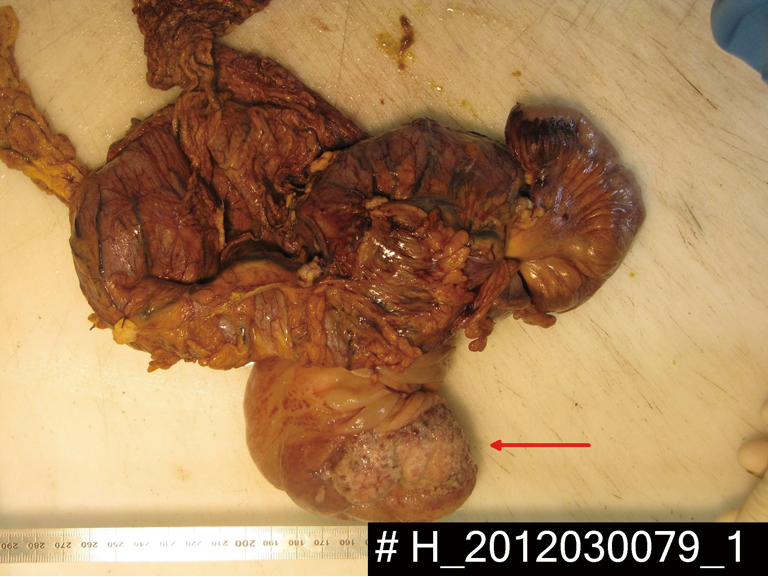 Bowel intussusception represents a very rare and unusual disease in adult patients and is substantially different to pediatric intussusception in regard of its etiology, clinical presentation and treatment strategies. In children intussusception is usually idiopathic and benign whereas almost 90% of adult intussusceptions are caused secondarily by underlying benign or malign pathologies with a significant risk of associated malignancies in 65% of all cases (1,2).

Although symptoms may vary considerably, the classic pediatric manifestation of acute intussusception as the triad of cramping abdominal pain, bloody diarrhea and palpable tender mass can be rarely detected in adult patients (3,6). Wang et al. reported abdominal cramping pain in nearly 80% as a leading symptom, moreover abdominal distension in more than 50%, nausea and vomiting in 45% as well as diarrhea in 20% as predominantly symptoms in a review of 24 patients retrospectively. Clinical signs of a palpable abdominal mass or bloody stool were found in less than 9% of their patients (5). Similar frequencies of dominating symptoms were seen by Wang et al. in a retrospective analysis of 41 cases. Bloody stool and a palpable abdominal mass were seen more often with nearly 27% and 34% respectively (6). The clinical presentations in our case were denoted by a ten-day history of increasing colicky abdominal pain and constipation associated with nausea and vomiting. Moreover physical examination revealed a palpable abdominal mass in the right upper abdomen as a very rare presentation in intussusception. Due to our clinical findings, bowel obstruction was suspected as a result of a large intestinal tumor.

In many cases symptoms often appear nonspecific as subacute or chronic manifestations and different severity. Therefore the correct preoperative diagnosis of intussusception remains difficult and no standardized diagnostic algorithm has been defined. In most cases, abdominal pain due to bowel obstruction is the dominating symptom in adults and leads to further investigations (5,6). Standard abdominal X-ray usually represents the first diagnostic tool demonstrating typical signs of intestinal obstruction or perforation and may provide information regarding the location of obstruction in the gastrointestinal tract. Such radiographic films unfortunately are neither sensitive nor specific for bowel intussusception whereas a sensitivity rate of nearly 100% and a specificity of 88% respectively were reported for ultrasonography (7). Typical target or doughnut signs on the transverse view and pseudo-kidney or hay-fork signs in the longitudinal view can be found by ultrasonography, but undoubtedly ultrasonography may be limited by massive air in case of bowel distension or morbid obesity. Moreover the diagnostic quality in such cases may depend on the experience of the investigating radiologist (2,3,8). In our case abdominal X-ray was the first diagnostic tool showing air-liquid-levels only in the stomach and in a bowel loop in the left upper abdomen. Typical signs of severe bowel obstruction in terms of multiple air-fluid levels and bowel distension were absent probably due to a large tumor mass causing high bowel obstruction which was detected by ultrasonography and CT-scan.

Contrast enhanced CT-scans of the abdomen are considered as the most sensitive diagnostic method to confirm bowel intussusception with a diagnostic accuracy of 58-100% (3,8). The most characteristic signs include target or sausage shaped lesions as a concentric hyperdense double-ring which can be explained by the anatomical constitution of intussusception consisting of the outer intussuscipiens and central intussusceptum. Moreover, mesenteric vessels within the bowel lumen are characteristic on CT-scan. As a consequence of intussusception, signs of bowel obstruction and compromised vascular perfusion in terms of venous stasis, edema and air in the bowel wall due to necrosis or gangrene can be found. The main advantage of CT-scans has to be seen in the possibility to detect severe complications of intussusception like bowel obstruction or compromised vascular flow leading to bowel necrosis as well as in the possibility to detect potential malignancies as underlying pathology. Unfortunately the preoperative detection of the causing factor in many cases remains difficult (2,3,8,9). In our case a typical sausage formed mass associated with compromised mesenteric perfusion was detected, but a possible causing pathology was not visible also in a retrospective review of the CT-scan by an experienced radiologist.

An exact preoperative diagnosis is required to choose an optimal therapeutic procedure. Although surgical resection is recommended in nearly all cases, the optimal treatment is discussed controversially in adult patients. There are several therapeutic aspects that deserve mention. Compared to pediatric patients, bowel intussusception in adults is caused secondarily by a benign or malign pathology in 90% and approximately in 65% by malignancies respectively. Therefore a preoperative pneumatic or hydrostatic reduction followed by surgical resection is discussed controversially due to oncological reasons (2,3). A potential benefit of reduction before resection may be the possibility of a limited extent of resection. On the other hand main drawbacks in cases of malignancies leading to intussusception can be seen in potential intraluminal tumor seeding, venous tumor dissemination, perforation and anastomotic complications due to an edematous bowel wall. Moreover a main problem remains the differentiation of benign lesions from malignancies before reduction (5,10). Wang et al. reported malignancies as causing factor in 100% of colo-colonic intussusceptions and nearly 42% in ileocolic intussusceptions respectively. They considered that intraoperative colonoscopy may help to distinguish between benign and malignant lesions before reduction, moreover that reduction should be performed for patients in whom a benign lesion is identified by endoscopy (5). We think that due to the high incidence of malignancies in adult patients, a reduction should be performed only for histologically confirmed benign lesions, in all other cases an en bloc resection should be the treatment of choice. In our case histological examination of the specimen showed an adenocarcinoma as leading pathology. During surgery, a possible malignancy could not be excluded; moreover the mesenteric perfusion was compromised which led to bowel ischemia. Therefore primary resection en-bloc without reduction was performed.

Intussusception represents an infrequent and challenging condition in adult patients. Preoperative diagnosis and treatment strategies often remain difficult especially in emergency patients. Although there is no consensus about the best treatment in literature, we think that primary reduction followed by surgical resection should only be performed in cases of secured benign or idiopathic intussusceptions. The high incidence of malignancies in adult patients, which require an optimal oncological treatment, should be kept in mind.

Written informed consent was obtained from the patient for publication of this case report and any accompanying images.

Disclosure: The author declares no conflict of interest.