Although rare, the incidence of intrahepatic cholangiocarcinoma (ICC) has increased over the last several decades (1). ICC represents the second most common primary liver malignancy and has an insidious clinical course. ICC is commonly diagnosed at advanced stages with intra- and extra-hepatic metastases and peritoneal carcinomatosis precluding surgical resection. Surgical resection remains the only option for cure. However, in patients who undergo resection, the median survival is only 20–40 months with 5-year survival rates of 20–40% (2-6), highlighting the inadequacy of current surgical resection as the sole treatment modality.

The inclusion of a lymphadenectomy (LAD) as a component of surgical resection is debated. It is well accepted that lymph node (LN) metastasis at the time of the index operation is a poor prognostic factor for ICC (2,4,7-12). Despite this, the role of LAD remains ill defined. While routine LN dissection does not show a survival advantage, proponents of LAD believe it provides an accurate nodal staging, important prognostic information, and assists in the decision making regarding adjuvant treatment (13,14). The recently published 8th American Joint Committee on Cancer (AJCC) staging system made several modifications in order to more appropriately stratify prognosis, which included a new recommendation for the removal of at least six LNs at the time of surgical resection (15). Previously, there was no standardized recommendation on the extent of LAD in the United States. The current National Comprehensive Cancer Network (NCCN) guidelines for ICC state that “a portal lymphadenectomy is reasonable as this provides relevant staging information” (16). The literature reports rates of LAD at the time of index surgery range from 26% to 67% (4,6,17,18). Despite the important prognostic information that nodal status provides, as well as new recommendations to perform a LN dissection, it is unclear if surgeons are currently performing adequate LAD at the time of hepatic resection for localized ICC.

Despite the creation of a specific ICC staging system by the AJCC in 2009 and its recent modifications, it is unclear whether clinical practice or outcomes have changed. Given this, our objectives were to evaluate the current practice trends, clinical outcomes and overall survival (OS) for patients with surgically resected ICC, with specific regard for LAD and chemotherapy.

We used an augmented version of the National Cancer Institute’s Surveillance, Epidemiology, and End Results (SEER) database, including both radiation and chemotherapy data, to identify subjects diagnosed with ICC from 2000 through 2014. The SEER registries provide cancer surveillance for 18 geographic areas and represents 28% of the United States population. The registry collects both patient and tumor characteristics, including age at diagnosis, race, patient sex, primary tumor site, histologic subtype, tumor stage (T stage), tumor size, LN status, tumor grade, LN evaluation, diagnostic confirmation, type of surgery, vital status, and cause of death. We identified patients ≥18 years old who were diagnosed with ICC using the World Health Organization’s International Classification of Diseases, 3rd revision (ICD-3) codes (Table S1). We excluded records of patients with distant- or un-staged tumors based on historical stage. As only de-identified patient data was used, this study was exempt from review by the Institutional Review Board of the University of Minnesota.

To analyze OS we used the Kaplan-Meier method and Cox proportional hazard models. Our Cox proportional hazards models included age at diagnosis, race, tumor size, tumor grade, LN status, and use of chemotherapy. In all models, we performed sensitivity analyses to ensure that the observed effects were not a product of coding classifications such as the use of alternative node evaluation groupings and removal of non-significant factors. Results were considered statistically significant only for a P value ≤0.05 and a 95% confidence interval (CI). For all statistical analyses, we used SAS software, version 9.3 (SAS Institute, Cary, NC, USA).

Table 1 Patient and tumor characteristics for patients from the SEER database with intrahepatic cholangiocarcinoma, 2000–2014
Full table

LAD at the time of resection

We found that 621 patients (49%) underwent LAD, while 603 patients (48%) had no LAD at the time of surgical resection. Based on the new AJCC guidelines for adequate LAD, 39% underwent an inadequate LAD (1–5 nodes assessed), and only 10% had an adequate LAD (Table 1). Although a large proportion of patients did not receive AJCC recommended LAD, the rates of 6 or greater LN assessed significantly increased over time (P<0.05) (Figure 1A). 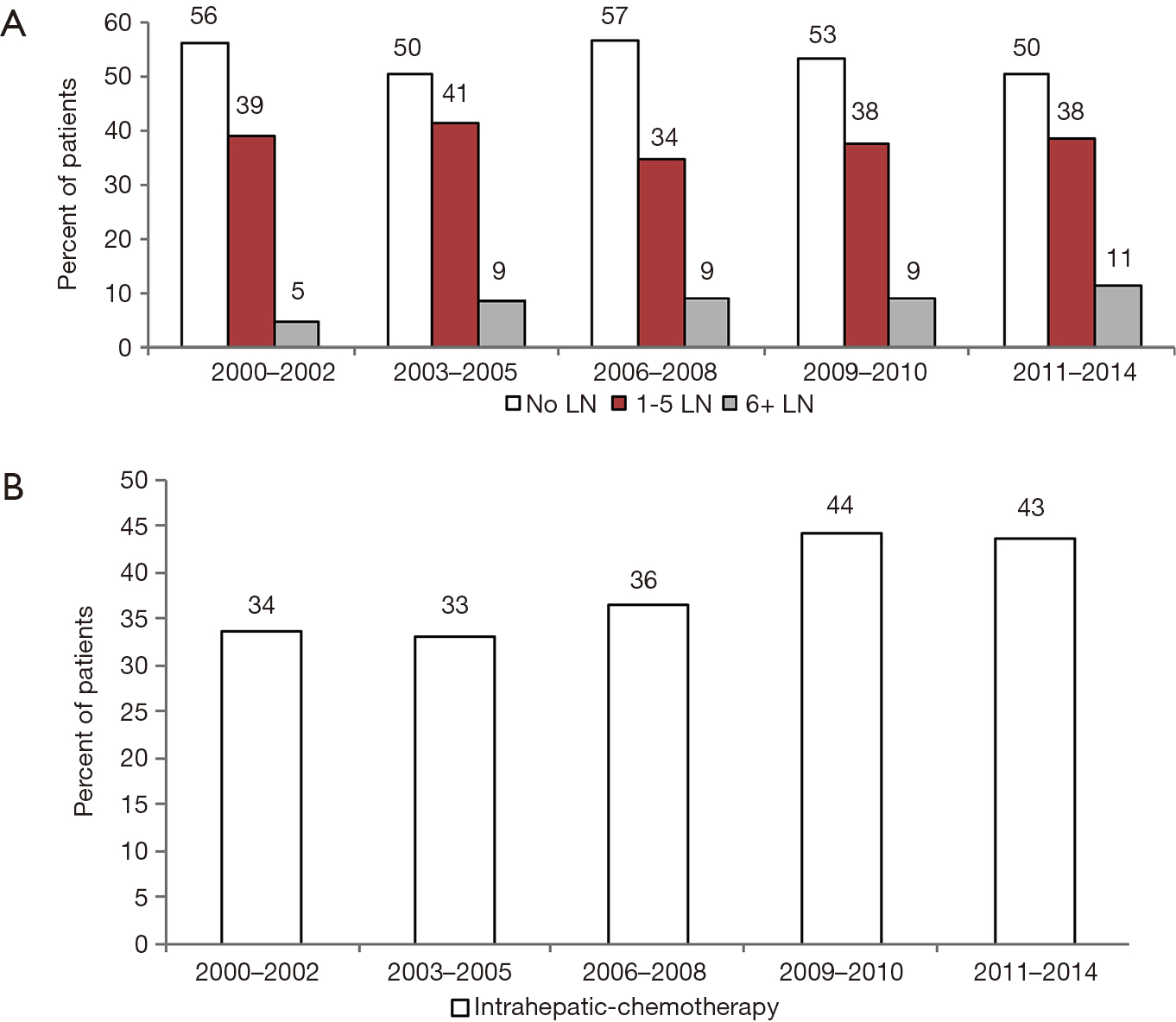 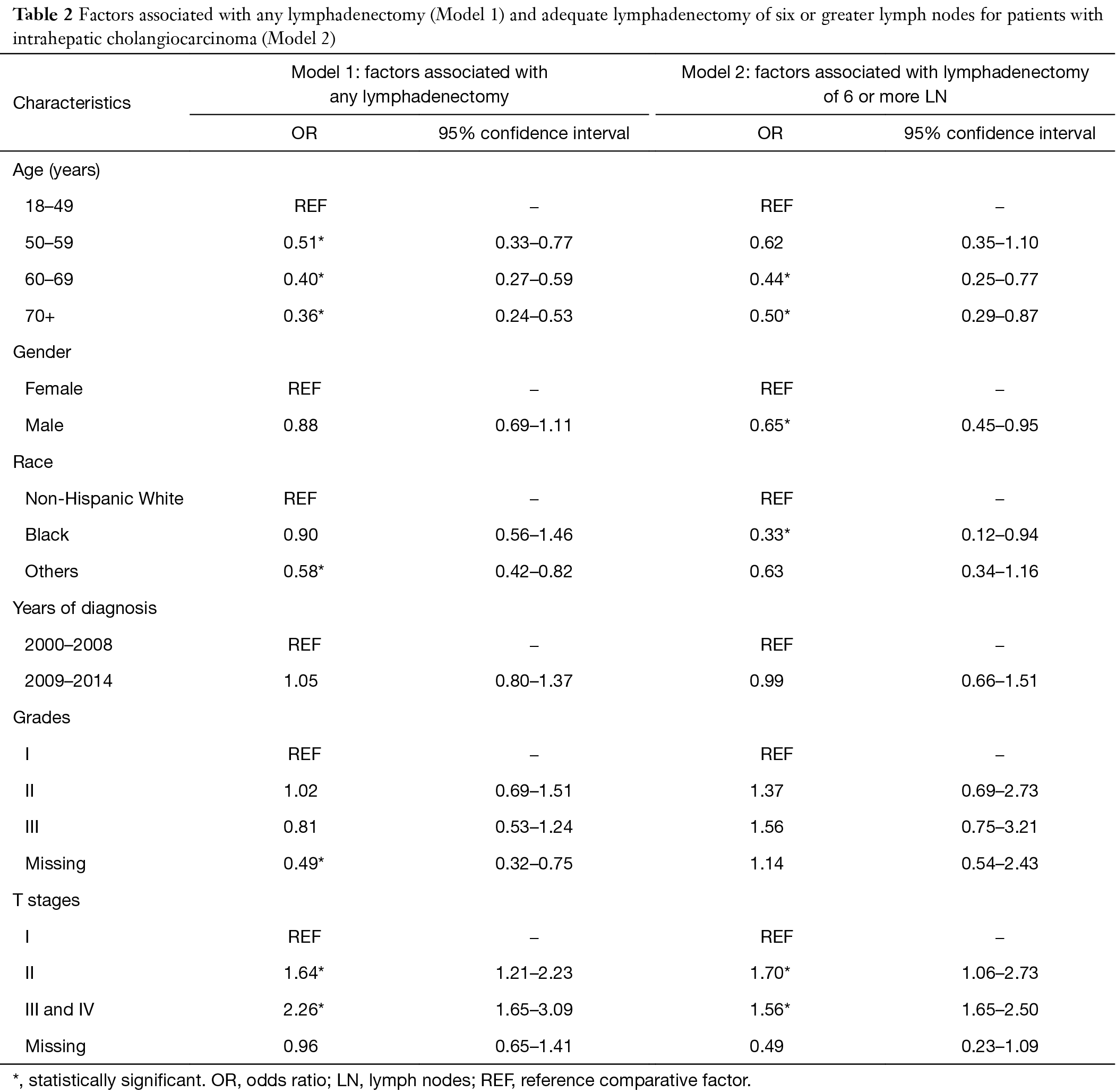 When stratified by time period (2000–2008 vs. 2009–2014), there was an improvement in median survival from 33 to 39 months (Figure 2A). Overall, unadjusted Kaplan-Meier mortality estimates showed significantly lower OS in the earlier time period. Further, nodal status was shown to significantly impact OS, as node negative patients had a median survival of 52 months compared to 20 months for those with node positive disease (Figure 2B). 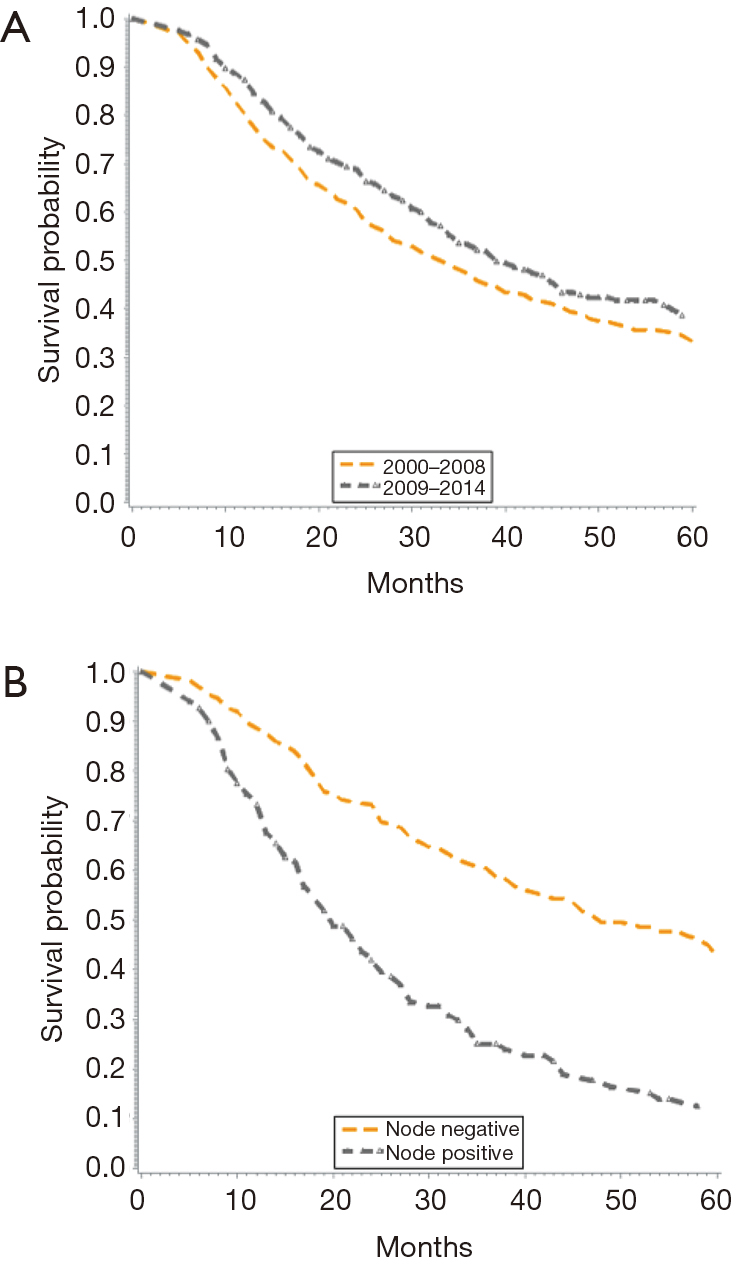 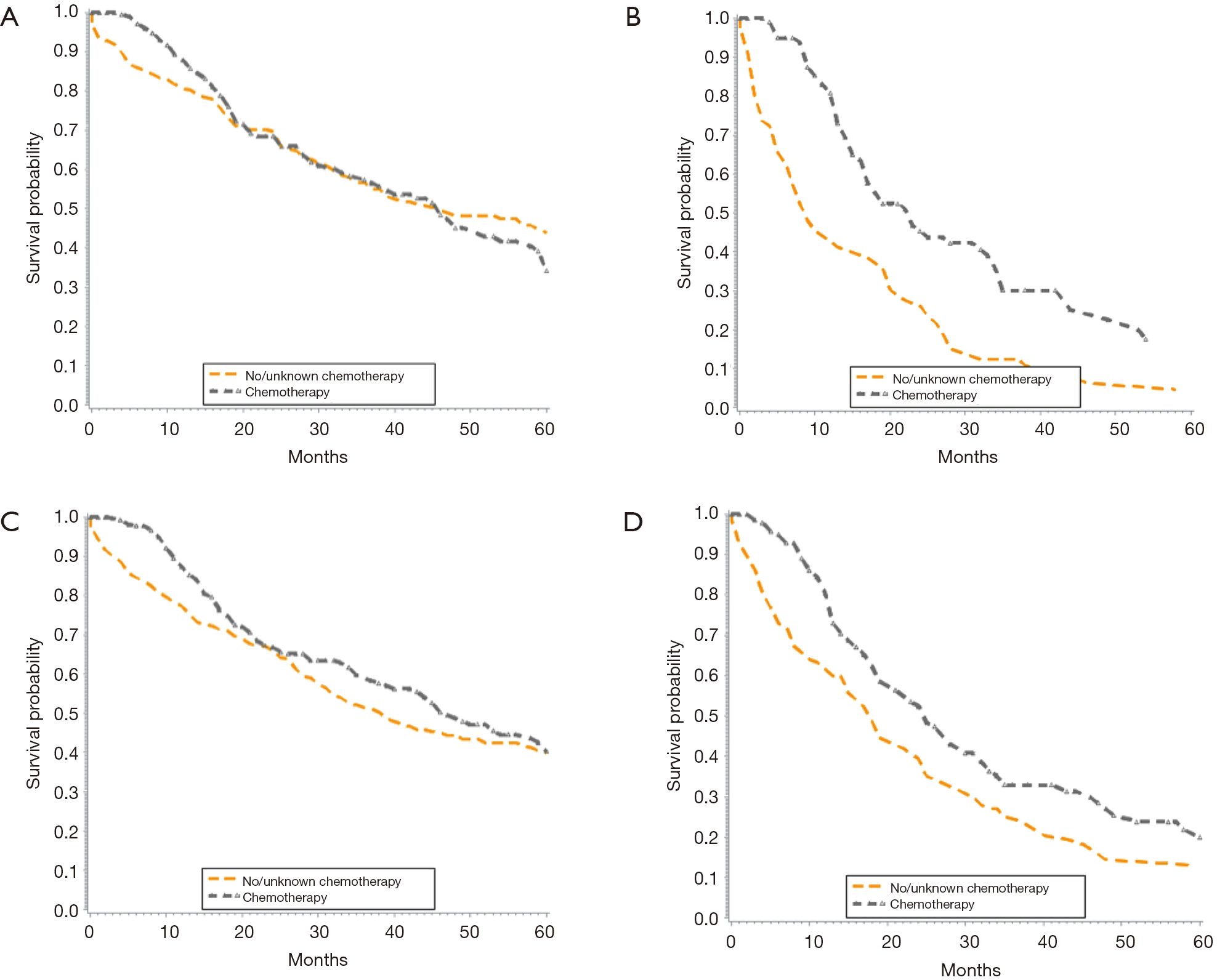 Due to its rarity, there are very few large-scale studies from which to draw meaningful conclusions about appropriate management for patients with ICC. Outcomes for ICC have historically been poor and there is limited evidence to suggest that modern treatment has significantly improved outcomes. Overall 5-year survival for patients with ICC was estimated at less than 5% from 1975 to 1999 (19). However, more recent studies show that for patients with surgically resectable disease, 5-year OS may approach 20–40% with median survival nearing 20–40 months (2-6). In this retrospective review of a national database over a 15-year time period, we found: (I) OS for patients with resected ICC improved; (II) chemotherapy utilization increased; and (III) surgical resection without LAD remained high, >50%. There is no doubt that some patients are being under staged and potentially undertreated with adjuvant therapy.

In the present study, we demonstrated an improvement in OS for patients diagnosed with ICC after the implementation of the initial ICC-specific AJCC staging system in 2009, compared to patients diagnosed prior. A previous review of the SEER database found that median OS for patients with resected ICC from 1992 to 2002 was 22 months (20). Taken together, this demonstrates that continued advances in surgical and medical therapy are slowly making improvements in OS for ICC patients.

With respect to surgical management of ICC, there is ongoing debate as to the extent, if any, of LAD. The recommendation for LAD was added to the 8th edition of the AJCC staging system, despite the evidence that the role of LAD for anything other than prognostication remains uncertain. LN positivity has repeatedly been shown to be a negative prognostic factor in ICC (2,4,7-12,25-27). We found that LAD occurred in 49% of patients which is comparable to previously reported rates from 25% to 67% (2,4,6,17,18). In the current study, 29% of patients who underwent LAD (removal of any number of nodes) were found to have metastatic disease while other studies have reported rates from 20% to 62% (21,28,29). Young age and advanced T stage were associated with LAD, suggesting that the current national practice is selective use of LAD. Perhaps, the node positivity rate for patients who currently do not undergo LAD would be less than the node positivity rates listed above. Nonetheless, node positive disease has a strong negative prognostic implication, as confirmed in this study, and patients undergoing surgical resection should expect to have appropriate nodal staging.

The newest version of the AJCC is the first to recommend that LAD include retrieval of 6 LNs (15). In our study, we found that more than 50% of patients did not undergo any LAD at all, and only 10% of patients received an adequate LAD. While extent of LAD may not entirely impact survival (30), another study showed an improvement in OS for N0 patients who had higher numbers of LN harvested (18). Even if LAD itself does not improve survival, adequate nodal evaluation is necessary for accurate staging and may inform treatment decisions. In the present study, we found that when LN status was excluded from the multivariable logistic regression model, patients who did not undergo LAD were less likely to receive chemotherapy. This suggests that patients who do not undergo LAD are less likely to receive adjuvant chemotherapy, which may result in an OS decrement. Nonetheless, it is clear that current surgical practices in the United States do not adhere to the recent AJCC recommendations for an adequate LAD. Furthermore, since there are no randomized trials to guide treatment for ICC, many recommendations for management of patients with ICC rely on retrospective studies of population based databases. By including inadequately staged patients these recommendations may contain significant bias.

While we provide a large retrospective review of current practice trends in the United States using the SEER database, we acknowledge that there are several potential limitations to this design. This study is an analysis of a retrospective database and, as such, may introduce selection bias. Furthermore, while the SEER database contains a number of useful clinical parameters, there are several important prognostic factors which are missing, such as margin status and comorbidities. Additionally, chemotherapy data from the SEER database is also flawed as it is distributed as a binary variable “yes” or “no/unknown”, making it impossible to accurately distinguish between “no” and “unknown” treatment. Further, the SEER database also lacks details on the specific chemotherapeutic strategy used for treatment, specifically if it is adjuvant or neoadjuvant; however, given limited use of neoadjuvant chemotherapy in this population during the time course studied, it is unlikely that this would impact a large subset of patients. Moreover, we found that the use of chemotherapy observed corresponds with findings in the literature (7,21,29). Finally, SEER cancer registries do not collect information on patient prognostic factors such as margin status, patient comorbidities, patients’ performance status, nutritional status, and surgeon and hospital volume.

In conclusion, this retrospective review of the large SEER database demonstrates that OS for ICC is improving with time. The negative prognostic value of LN metastasis and increased focus on LN evaluation notwithstanding, more than 50% of patients who underwent resection for ICC did not receive a LAD. As chemotherapy has been associated with improved survival in patients with high-risk features and LN metastases, LN evaluation should become a routine component of surgery for ICC for prognostication and stratification purposes, which will inform adjuvant therapy treatment decisions.

Ethical Statement: As only de-identified patient data was used, this study was exempt from review by the Institutional Review Board of the University of Minnesota.