Pancreatic adenocarcinoma remains a notoriously lethal malignancy, currently ranking as the fourth leading cause of cancer related death in the US, despite a relatively low incidence (1). Until recently, gemcitabine and erlotinib were the only agents known to improve overall survival (OS) in patients with unresectable pancreatic cancer to approximately 6 to 7 months (2). In 2011, a non-gemcitabine based therapy, FOLFIRINOX, was shown to improve survival to 11 months when compared with gemcitabine in a phase III randomized clinical trial in the first line setting (3). After failure of first line therapy, however, the options continue to be even more limited. There are currently no widely accepted treatments beyond first line. The only regimen to show evidence of survival benefit in a context of a randomized trial in this setting is oxaliplatin/5-FU/leucovorin (OFF), which improved overall survival to 4.8 months from 2.3 months with best supportive care (4).

Nab-paclitaxel (trade name, Abraxane), is paclitaxel bound to nano-particle albumin, a first drug of this type. Nab-paclitaxel was initially developed to avoid hypersensitivity reactions that resulted from solvents such as cremephor that are used to dissolve paclitaxel. Nab-paclitaxel has been approved by the Food and Drug Administration since 2004 for use in metastatic breast cancer as well as metastatic non-small cell lung cancer (5,6). In addition to eliminating hypersensitivity reaction, it has also been postulated that uptake of albumin by tumor cells may allow improved intra-tumoral delivery of nab-paclitaxel. This may be especially relevant in pancreatic cancer given the dense stromal component of this malignancy that has been postulated as being central to its chemoresistance (7). In fact, a protein present in stroma of many pancreatic adenocarcinomas, secreted protein acidic and rich in cysteine (SPARC), may help serve as an albumin-binding protein that sequesters nab-paclitaxel to concentrate the drug intratumorally (8).

Patients with pancreatic adenocarcinoma at Washington University in St. Louis Siteman Cancer Center, who were treated with nab-paclitaxel monotherapy between January 2009 and July 2012, were eligible for inclusion. A retrospective and prospective registry was established to capture all patients after Institutional Board Review (IRB) approval was obtained. Patients were 18 years of age or older and had pathologically confirmed pancreatic adenocarcinoma. All patients had advanced or recurrent pancreatic cancer which had progressed through at least one earlier line of chemotherapy. Demographic data collected included age, race, gender, ECOG performance status, and prior treatments. Baseline laboratory values were recorded including tumor marker CA 19-9. Data collection was stopped in September 2012. All patients treated with at least one dose of nab-paclitaxel were included for analysis.

Nab-paclitaxel dosing and schedule (every week for two weeks then one week off versus every week for three weeks then one week off) was chosen by the practicing oncologist. The dose and schedule used was recorded for the purposes of this study. Staging imaging (CT or MRI) was obtained per the discretion of the treating oncologists during treatment. When available after at least one month of therapy, the images were analyzed according to the Response Evaluation Criteria in Solid Tumors. Clinic notes were also reviewed for clinician assessment of response and if it differed from radiological assessment, the clinical assessment of response was to be used.

All clinic notes were reviewed for any hospitalizations, dose reductions or cessation of treatment due to adverse events. Laboratory values before and after each treatment cycle were also reviewed to corroborate and document any additional adverse events using complete blood count and comprehensive metabolic panel in each patient. Adverse events were graded using National Cancer Institute Common Terminology Criteria for Adverse Events (version 4.0). Patients who received at least one dose of chemotherapy were included for toxicity evaluation.

A total of 20 patients were registered for this study. Four of the 20 had already finished treatment at the start of this registry and were reviewed retrospectively. The rest were reviewed either completely prospectively or prospectively and retrospectively as appropriate (5 and 11 patients respectively). Patient characteristics are listed in Table 1. Median age of patients was 63.5, with a wide range of 45 to 84 years old. There were equal number of men and women and majority had an ECOG of 0 or 1 (90%). All patients had previously received gemcitabine monotherapy and some had progressed through other additional chemotherapies, including FOLFIRINOX in 8 patients and nab-paclitaxel combined with other agents in 3 patients. Median number of prior lines of therapy was 2, with a range of 1 to 4. Overall, 18 patients (90%) had received at least two prior treatment regimens. 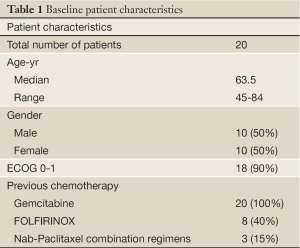 Patients received treatment for a median of 15 weeks, ranging from one to six cycles. Eleven patients (55%) were able to receive therapy for at least 4 months. Patients were started on nab-paclitaxel at 100 or 125 mg/m2, with three patients having doses later decreased to 75 or 80 mg/m2. Roughly half the patients were treated on a three week on, one week off cycle, while the other half were treated on a two week on, one week off cycle. Median dose was 100 mg/m2.

Majority of patients discontinued treatment due to either progression of disease or decline in functional status (15 patients, 75%). Three patients (15%) were still on nab-paclitaxel at the time of closing study data collection.

Best response imaging was available in 17 patients (Table 2). Of these patients, while no patient had a complete or partial response, 65% had stable disease at as their best response on imaging. 35% progressed without any stabilization of disease. There was no discrepancy between response by imaging and clinical impression. Of the 12 patients who had elevated baseline CA 19-9, seven (58%), had a 50% or more decline in levels. The three patients who had uninterrupted CA 19-9 elevation post therapy were all shown to have progressive disease on first imaging. 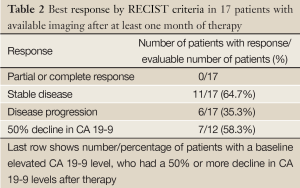 Median progression free survival was 3.7 months. In patients who had a response, median duration of response was 4.7 months. At the end of data collection, 6 out of 19 patients were still living. Median overall survival in the study population was 5.2 months.

Adverse events directly attributed to nab-paclitaxel were the cause of treatment discontinuation in only two patients (10%), both being mucositis, in one concurrently with neutropenia. Grade 2 or worse fatigue was seen in four patients while significant dehydration was seen in one patient (grade 3). Only one patient was hospitalized as a result of therapy. Three patients (15%) developed grade 3 or 4 neutropenia with one also developing neutropenic fever. An unexpected adverse event possibly related to nab-paclitaxel was pneumonitis that occurred in five patients. All cases of pneumonitis were grade 1.

Advanced pancreatic cancer has recently witnessed the introduction of the first regimens to improve on gemcitabine therapy in decades. Two years ago, FOLFIRINOX, a combination regimen consisting of 5-FU, oxaliplatin and irinotecan was shown in a landmark study to improve survival compared with gemcitabine from 6.8 to 11.1 months (3). Earlier this year, combination of gemcitabine with nab-paclitaxel was also shown to improve survival compared with gemcitabine, albeit more modestly from 6.7 to 8.5 months (10). Although these developments are cause for hope in a field which has seen little to be excited about in a long time, they clearly represent modest progress. Patients eventually progress through these regimens and there is a dire need for treatment options beyond first line of therapy.

Here we present a registry study examining nab-paclitaxel monotherapy beyond first line of therapy. 90% of patients included in our study had received at least two other lines of therapy, including nab-paclitaxel combination therapy and/or FOLFIRINOX in some. We found nab-paclitaxel therapy to be relatively well tolerated in this pretreated patient population with good level of clinical activity. The PFS was 3.7 months and OS was 5.2 months, with more than 4 months duration of response in patients who had stabilization of disease. Responses in CA 19-9 were seen along with imaging response.

Our study has the usual limitations of being a non randomized study. Nab-paclitaxel dosage schedule and dose reductions in response to toxicity were at the discretion of the treating oncologist thereby limiting recommendations on a dose schedule. Despite these limitations and the small number of patients, however, our results are consistent with evidence of benefit from nab-paclitaxel monotherapy seen in another small study (11). Furthermore, our study is the first to our knowledge to include patients treated with either nab-paclitaxel combination therapy or FOLFIRINOX. This is significant given that either of these two regimens is now considered a standard treatment option for first line therapy of patients with advanced pancreatic cancer. Our study represents evidence that nab-paclitaxel monotherapy could be an option in these patients upon progression.

The publication was supported by the Washington University Institute of Clinical and Translational Sciences Grant UL1TR000448 from the National Center for Advancing Translational Sciences (NCATS) and KL2TR000450. The content is solely the responsibility of the authors and does not necessarily represent the official views of the NIH.