Adenocarcinoma of the proximal rectum and synchronous non-Hodgkin’s lymphoma

Colorectal cancer is one of the top 5 common cancers in the United States and the second cause of cancer death. In 2012, the American Cancer Society estimated 40,290 new cases of rectal cancer (1). With appropriate screening and treatment, the mortality from colorectal cancer can be reduced significantly across the United States (2). This article illustrates the need of proper staging and investigation of questionable findings, prior to developing a patient’s treatment plan.

A 75 years-old active and healthy gentleman experienced new onset of bright red blood per rectum on defecation and constipation. Colonoscopy revealed a semi-circumferential lesion at about 13 cm from the anal verge. The posteriorly locating mass occupied at least 60% of the lumen. Biopsy showed invasive adenocarcinoma which was moderately differentiated, consistent with a primary rectal cancer. Chest X-ray was negative. CT of abdomen and pelvis with oral and intravenous contrast showed thickening mucosa with narrowing of the lumen by the rectal lesion. The lesion measured 5 cm, locating just distal to rectosigmoid junction with peri-rectal fat stranding and minimal peri-rectal adenopathy, inflammatory versus potential nodal disease. There were also small retroperitoneal adenopathies. CBC and comprehensive metabolic panel values were within normal limits. Tumor marker CEA level was 1 ng/mL. Endorectal ultrasound was not applicable due to the proximal location. Patient’s past medical history consisted of dyslipidemia and coronary artery disease status post one cardiac stent placement. He remained active and continued to work full time in his own business. On examination, patient was well nourished, well developed and slightly overweight. On digital rectal examination, the rectal mass was not reachable. There was no palpable adenopathy in neck, supraclavicular, axillary and inguinal areas. Remainder of the examination was normal. Karnofsky Performance Status was rated at 90%.

A PET-CT was also performed for evaluation of the adenopathies. PET-CT results showed the index rectal lesion with size of 5.4 cm without hypermetabolic peri-rectal adenopathy. The maximal standardized uptake value (suv) of the index lesion was 17.3 (Figure 1). Additionally, a 1.5 cm right inguinal lymph node with suv of 6.3 (Figure 2) were noted. Multiple small lymph nodes with mild PET-avidity in the para-aortic region measuring less than 1.2 cm with suv up to 4.8 (Figure 3) were also noted. No distant metastasis was suspected in the pelvic nodal chains, liver, lung or skeletal system. Although the pattern of potential nodal involvement was atypical for rectal cancer, differential diagnosis of metastatic disease needed to be ruled out. The right inguinal lymph node was assessable to CT-guided biopsy. Patient underwent core biopsy of the right inguinal node by an interventional radiologist. Final pathology revealed a follicular non-Hodgkin’s lymphoma, CD20 positive, as a second primary malignancy. Upon completion of further workup, patient was found to have synchronous diagnoses of a stage II non-Hodgkin’s lymphoma and a cT3 N0 M0 proximal rectal adenocarcinoma with moderate obstruction. The rectal adenocarcinoma was treated as a localized disease with plan for definitive resection. Treatment plan was therefore prioritized to the symptomatic rectal cancer, and the treatment plan for the lymphoma to follow. Treatment for the rectal cancer consisted of neoadjuvant chemoradiation with plan for low anterior resection as the definitive surgery. Patient tolerated the treatment well. 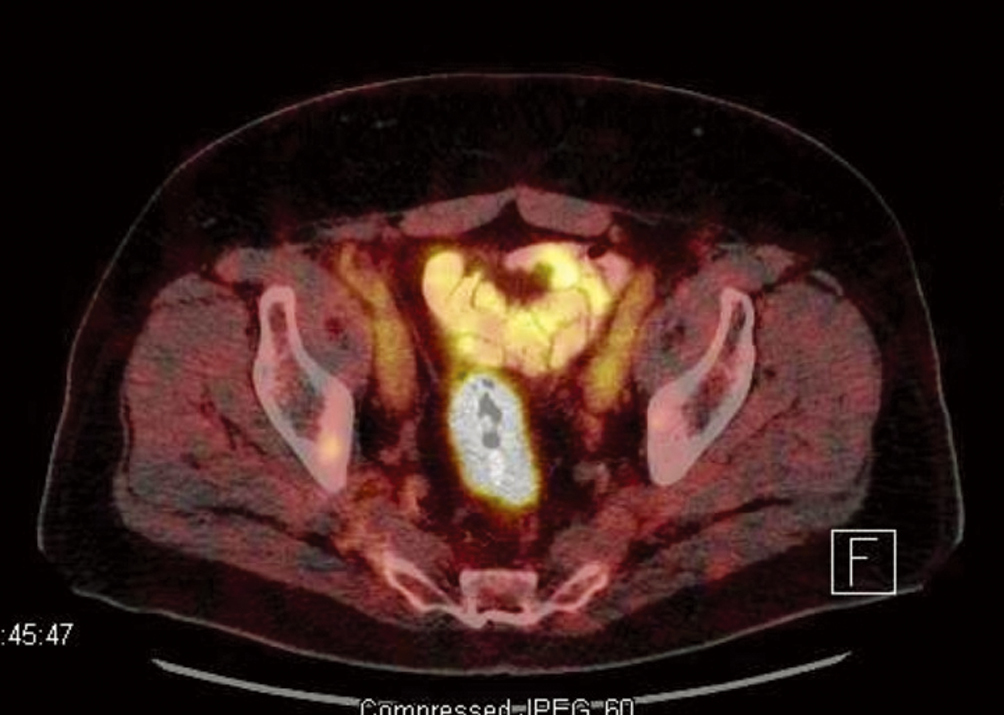 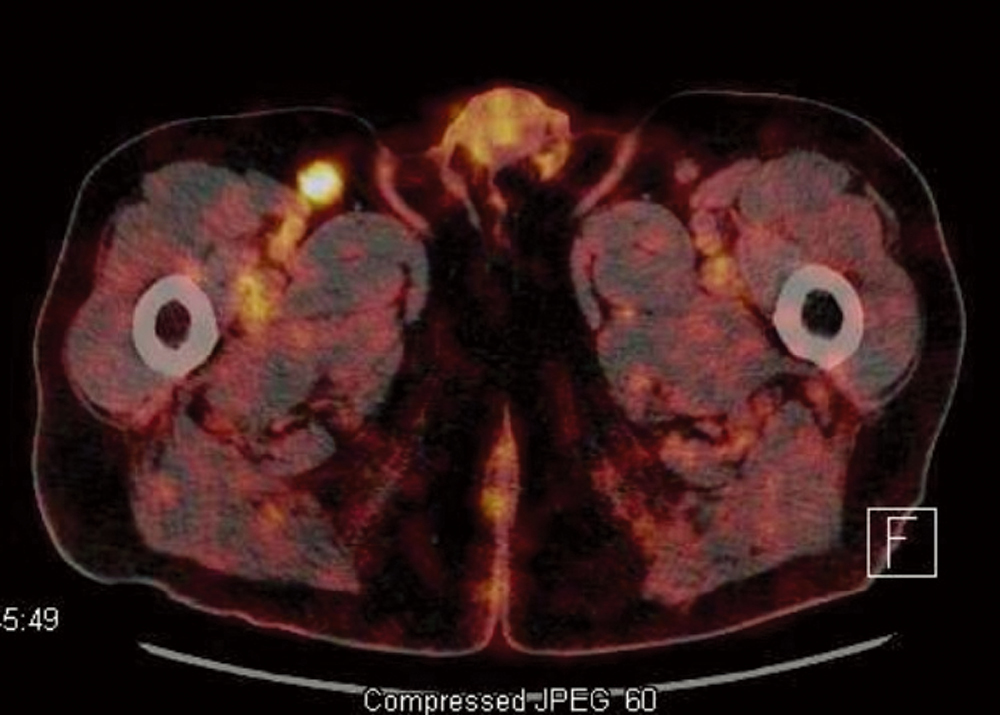 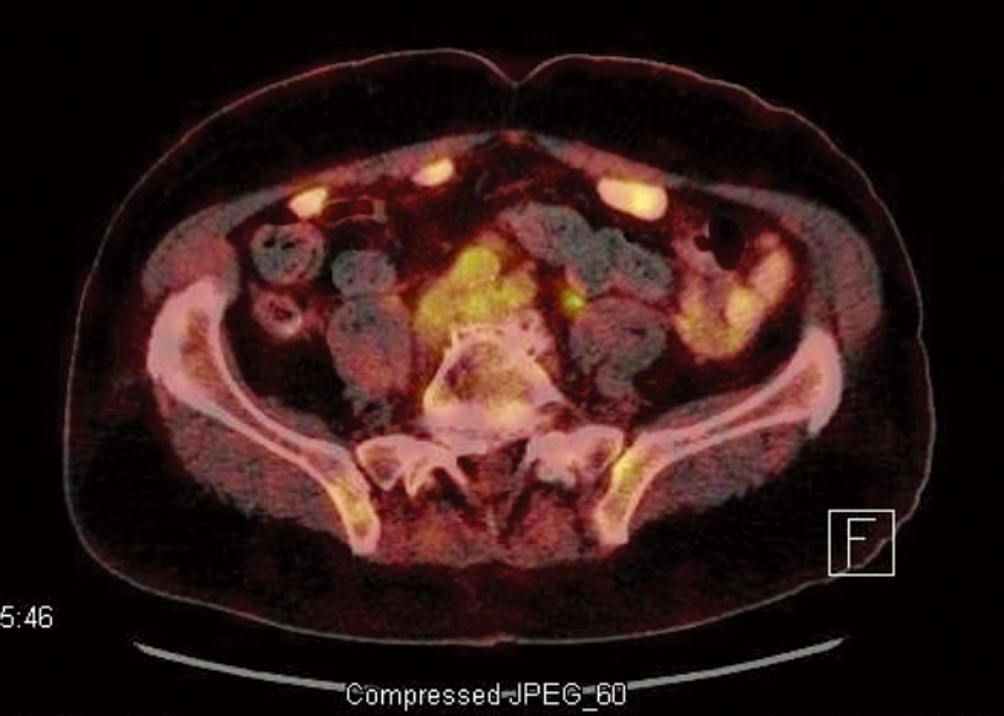 Primary treatment of rectal cancer is definitive resection in conjunction with neoadjuvant or postoperative multimodality therapy as indicated. Common regional nodes for rectal and rectosigmoid cancer include peri-rectal, left colic, sigmoid mesenteric, inferior mesenteric, presacral, internal iliac, superior-middle-inferior hemorrhoidal, lateral sacral and sacral promontory regions. Involvement of external iliac and inguinal nodal regions are rare. Therefore, these regions are not typically included in radiation field design. Exceptions are made for T4 tumors involving anterior structures. Inclusion of the inguinal nodes for tumors invading into the distal anal cancer should also be considered (3). For patients with true metastatic disease to inguinal regions, their prognosis could be poor with median survival of about 12 months in previous retrospective studies (4,5). In cases of stage IV disease, local control of the disease and use of surgery will depend on the general health of the patient as well as clinical symptoms and response to induction chemotherapy. If a patient is deemed to have a stage IV disease, systemic chemotherapy will generally be used for disease control. Surgery and/or radiation would be reserved for symptomatic control in such cases. Should this patient have been deemed stage IV, he would have missed the opportunity for optimal local control without a chance for definitive treatment. By further defining the disease stage of patient’s rectal cancer by defining the histology of the inguinal lymph node, we were able to identify the lymphoma as a second primary malignancy. Therefore, definitive treatment plans were applied for optimal control of both cancers in this healthy gentleman.