Treatment of esophagogastric junction (EGJ) adenocarcinoma (ADC) mostly includes a total gastrectomy (TG) associated to esophagectomy with free resection margins and mediastinal lymphadenectomy, producing high surgical trauma and risk of postoperative complications (1-3). Despite improvements in surgical technique and perioperative management, esophagojejunal anastomotic leakage (EJAL) still constitutes one of the most serious and sometimes life-threatening complication, with reported incidence of 2.9–9% (4-8). It is not only associated with increased mortality rates and prolonged hospital stay but it has been also recognized as a poor prognostic factor in recent series (6-11). Treatment options include conservative treatment, endoscopic therapy or surgery. Nevertheless, optimal management of EJAL remains controversial and it still represents a very challenging event. We present our experience discussing the different options of treatment today available.

A prospectively maintained gastric cancer database identified 198 patients with EGJ ADC consecutively operated from June 1998 to May 2013 in our Department. Surgical treatment varied according to Siewert’s type as previously described (3). Type I tumors underwent transthoracic (TT) en bloc subtotal esophagectomy and TG. In type II tumors a transhiatal (TH) TG with distal esophagectomy was performed. Type III tumors were excluded from the study since esophagojejunal anastomosis is intraabdominal (IA). Extent of lymph node dissection followed the Japanese Gastric Cancer Association guidelines (12). In type I a two-field extended lymphadenectomy (abdominal and thoracic) was performed. In type II en bloc removal of the lower mediastinal nodes together with a D2 lymphadenectomy was performed. Proximal resection margin length was 5-8 cm accordingly to Siewert’s type and intraoperative frozen section margin examination was always performed. The mode of reconstruction was circular-stapled end-to-side Roux-en-Y esophagojejunal anastomosis in all cases. Tumor staging was evaluated according to the 7th edition of the TNM classification system for gastric carcinoma (13). Diagnosis of EJAL was based on a combination of clinical and radiological findings. Endoscopy was performed to obtain information regarding size of the anastomotic defect and integrity of the surrounding tissue. A Computed Tomography (CT) scan was always included to detect the presence of undrained fluid collections. Leakage was classified according to the system proposed by Schuchert et al. (14) with some modifications, including objective endoscopic (degree of anastomotic dehiscence) and clinical (degree of intervention required) parameters. Patients with confirmed anastomotic leaks were classified with the following scale: class 1: radiographic leak only, requiring no intervention; class 2: leak (<10% of circumference) requiring percutaneous drainage; class 3: disruption of anastomosis (10–50% circumference) with perianastomotic abscess requiring endoscopic intervention or surgery; class 4: necrosis with anastomotic separation (>50% circumference), requiring emergency surgery. The study was reported to the ethics committee that ethically reviewed and approved the research. Informed consent was obtained from the patient before the procedures.

Our management algorithm is described in Figure 1. Follow-up information was regularly obtained from outpatient clinical visits, from the time of surgery to June 2013 or death. Median follow-up was 610 days (range, 13–1,600 days). 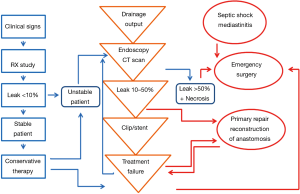 Anastomotic leakage was diagnosed in 14 cases (7%). Table 1 shows demographics and clinical characteristics of the patients. Most (65%) were men and the median age was 63.5 years (range, 49–75 years). According to Siewert’s classification, primary tumors were 8 type I and 5 type II. The remaining case was a small anastomotic recurrence 3 years after TG for a type II cancer. Most tumors were locally advanced with 70% showing positive nodes. Table 2 shows details of the management and results. The median duration from surgery to diagnosis of leakage was 7.5 days (range, 2–13 days). No class 1 cases were observed. Two class 2 cases were low output fistulas with mild clinical and laboratory signs (fever, leucocytosis and abnormal C-reactive protein) confirmed by radiology occurring in postoperative day 9 and 10. They recovered with conservative therapy (i.e., fasting, Total Parenteral Nutrition, somatostatin and broad-spectrum antibiotics) after an average of 15 days. In six class 3 cases occurring in postoperative day 3 to 13, endoscopy showed an anastomotic defect treated with clips placement in 2 (Figure 2) and partially covered self-expandable metal stent (CSEMS) placement in 4 cases (Figure 3). Percutaneous CT-guided drainage was required in 4 cases (Figure 3C). In two patients stent migration occurred requiring repositioning. Fluids were usually allowed 1 day later followed by solid, after radiographic evidence of correct placement and all stents was safely removed at the planned interval time after an average residence time of 4–6 weeks. Other two class 3 cases underwent reoperation respectively in postoperative day 3 and 13 because of IA high output fistula. The first patient was submitted to reconstruction of anastomosis while the second one underwent primary repair. In the remaining four class 4 cases mediastinitis with clinical sign of shock emergency surgery with drainage, total esophagectomy and diversion was required. Mortality occurred in 3 of these last patients. The surviving patient underwent esophageal reconstruction at a later date using the terminal ileum and right colon via retrosternal route (Figure 4). No patient undergoing endoscopic therapy died and overall treatment was successful with complete recovery in 11 patients (78.5%). Follow-up endoscopy was scheduled at 3 and 6 months for the first year, then yearly. Excluding postoperative deaths, nine patients are currently alive between 180 and 1,600 days and two are dead of recurrence at 220 and 575 days respectively. 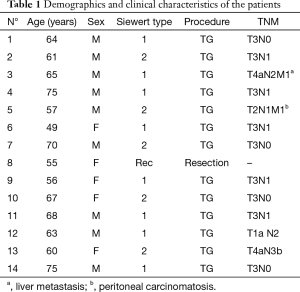 Table 1 Demographics and clinical characteristics of the patients
Full table 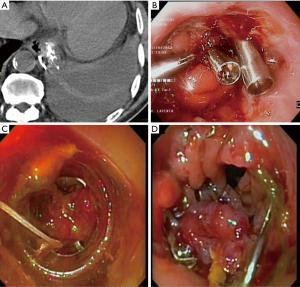 The incidence of EGJ ADC has increased and overall prognosis is still poor. Surgery is the treatment of choice but it associated with significant morbidity particularly concerning EJAL, with reported incidence of 2.9–9% (4-8). It is not only associated with increased mortality rates and prolonged hospital stay but it has been also recognized as a poor prognostic factor in recent series (6-11). In a retrospective multicenter study, anastomotic leak was the cause of death within 30 days for 30% of cases (15). Several risk factors have been described including ischemia, which may be caused by performance status, nutritional parameters, impaired blood supply or oxygen delivery, anastomotic tension, operation time and technique (1,5,7,10,14-18). An accurate comparison between studies is precluded since there is no universally accepted classification and the majority of studies used a combination of clinical and radiographic features leading to confusing results (14,19). We used the Schuchert’s classification since acute mediastinitis is the most fearful condition influencing treatment and usually patients die of multiorgan failure associated with sepsis. Treatment of EJAL is challenging regardless of its origin. Options include conservative treatment, endoscopic therapy or surgery and the choice is made according to patient’s clinical condition, timing of diagnosis, anastomotic level, size of the leakage and margins status. The most aggressive treatment including total esophagectomy with diversion is indicated for large high anastomotic defect (>50% of the circumference) with conduit necrosis accompanied by severe sepsis and/or mediastinitis. These patients should be treated as soon as possible (within 24 h) from the diagnosis in order to avoid high mortality rates up to 65% despite aggressive surgery, as it occurred also in our series (4,8,20). Anastomotic level influences clinical symptoms and particularly the grade of mediastinitis. In IA anastomosis the pleural integrity and presence of close abdominal drains produce a good abdominal draining usually avoiding the onset of a severe mediastinitis. In TT anastomosis with opening of the mediastinal pleura, the leak drains spontaneously in the pleural cavity producing an esophagopleural fistula rarely producing severe mediastinitis because of the presence of a chest drain. In TH anastomosis without pleural opening, the leak carries a higher risk of mediastinitis since pleural integrity doesn’t allow adequate mediastinal drainage because of the different pressure within the pleural cavity. In such emergency cases a total esophagectomy without thoracotomy and enteral nutrition by jejunostomy may be performed. Excluding these seriously ill patients, surgical treatment including primary repair or reconstruction of anastomosis should be considered in those demonstrating clinical deterioration or when endoscopic therapy is ineffective. Size of the leakage also strongly influences clinical symptoms and appropriate treatment. In presence of mild clinical symptoms and laboratory signs (fever, leukocytosis and abnormal C-reactive protein), low output fistulas from the drains and small radiologic leaks (<10% of the circumference) conservative therapy is the treatment of choice with fasting, TPN or Enteral Nutrition, somatostatin-analogue and antibiotics (20-22). Percutaneous radiologic-guided drainage is mandatory in presence of undrained fluid collections. In other cases, available treatment options include endoscopic therapies, such as clip or self-expanding stent (SES) placement, depending on size of the leakage and margins status. The gold standard for endoscopic treatment is a leakage up to 50% of the circumference in absence of conduit necrosis. Biological sealants or clip placement can be considered for small defects (<30% of the circumference) (20,23-25). Concerning sealants, only occasional cases of successful management of EJAL have been reported (25-28). Clip placement is a safe and effective method in the treatment of digestive fistulas. Multiple clips can be placed beginning at either edge of a defect meeting at the center but limitations may be represented by the lack of grap force exerted on the damaged tissue and the partial success in full-thickness perforations. The new Over-The-Scope-Clip (OTSC) system showed less drawbacks and improved results for early leakages (<1 week) without fibrosis in preliminary reports (25,29,30). In cases with larger defect (30–50% of the circumference) without necrosis, partially or fully covered plastic (SEPS) metal (SEMS) stent placement seems to be more effective. An absolute prerequisite for complete healing of the leak is adequate drainage of undrained fluid collections. High sealing incidence rates are reported, especially in case of early and well perfused EJAL but complications may occur in up to 70% of cases, including stent migration and tissue in- or overgrowth (24,25,31-35). In the first study comparing different stent type, van Boeckel et al. (31) showed that efficacy was not different between them and stent choice should depend on expected risk of migration (SEPS) and tissue in- or overgrowth (fully covered SEMS and SEPS). A period of 5–6 weeks was considered safe and effective for anastomotic leak to heal. Since commercially available SES may lead to insufficient sealing of the leaks due to lumen-to-stent size discrepancies particularly at the gastroesophageal junction, successful treatment using a partially covered SEMS with larger diameter has been reported (34). A recent prospective study showed significantly higher successful sealing rates at the first attempt with SEMS but more complications respect to non-stent endoscopic therapy, producing similar overall clinical outcomes (24). Last as for esophageal perforations endoscopic placed vacuum sponge-assisted (VAC) therapy may be a potent supplement in the management of anastomotic leakages with uncompromised local perfusion (25,36). According to most Authors, major clinical factors affecting prognosis are the interval from diagnosis to intervention and size of the leakage (23-25,31,36). In conclusion, esophagojejunal anastomosis leakage is a serious complication associated with increased mortality rates and prolonged hospital stay after surgery for EGJ ADC. No consensus has been reached on the best method of treatment and the rate of failure remains significant. Mortality is still high in patients with severe mediastinitis, despite aggressive surgery. Conservative management is helpful in clinically stable patients with small leakages. Endoscopic therapy with clip or stent placement may allow a complete recovery in many cases. When these measures fail, surgical options are available. Early detection and multidisciplinary approach are the keys to obtain successful results irrespective of the treatment strategy.

Ethical Statement: The study was reported to the ethics committee that ethically reviewed and approved the research. Informed consent was obtained from the patient before the procedures.