Preoperative chemoradiotherapy (CRT) results in local control improvement and downstaging with, subsequently, the increased possibility of sphincter sparing in low rectal tumour and less toxicity in comparison with postoperative chemoradiation (1,2). Pathologic downstaging of a rectal cancer occurs when the final pathologic stage response is less than the preoperative stage of the tumour. A pathologic complete response (pCR) (absence of cancer cells in the resected surgical specimen) can occur after neoadjuvant treatment and this result may confer a survival advantage [overall survival (OS) and disease-free survival (DFS)] (3-12).

The aim of the current study is to assess the pathologic response rates following neoadjuvant CRT and evaluate the influence of response to neoadjuvant treatment on the long-term outcome in patients with locally advanced rectal cancer.

Pre-treatment staging was performed by endorectal ultrasound (ERUS) or magnetic resonance imaging (MRI), in addition to a range of other investigations including computed tomography (CT) of chest and abdomen, colonoscopy, complete blood count, blood chemistry and carcinoembriogenic antigen (CEA). All patients were treated at The Alfred Hospital, Melbourne, Australia, between 2005 and 2010.

Institutional review board approval was granted for this study.

During a median follow-up of 74 months, patients were clinically evaluated (history and examination) and were referred for radiological assessment (chest X-ray, abdominal-pelvic CT scan, colonoscopy and other investigations) as per clinical indications.

Continuous data were expressed as mean (SD), median and the range between parentheses.

Qualitative data are presented as absolute numbers or percentages. Comparative analysis of the quantitative data was performed using the Student’s t-test. The chi-square or Fisher’s exact tests were used for comparing proportions as appropriate. Odds ratio (OR) and 95% confidence interval (CI) were reported for significant associations. Estimates of DFS and OS were calculated using the Kaplan-Meier method. Patient and disease factors were evaluated using log-ranked test, with result reported as median and 95% CI. Statistical significance was defined as P≤0.05.

Fifty percent of the patients were staged by ERUS, 48.4% by MRI and 1.6% had both modalities for staging.

Patients and tumour characteristics are listed in Table 1. 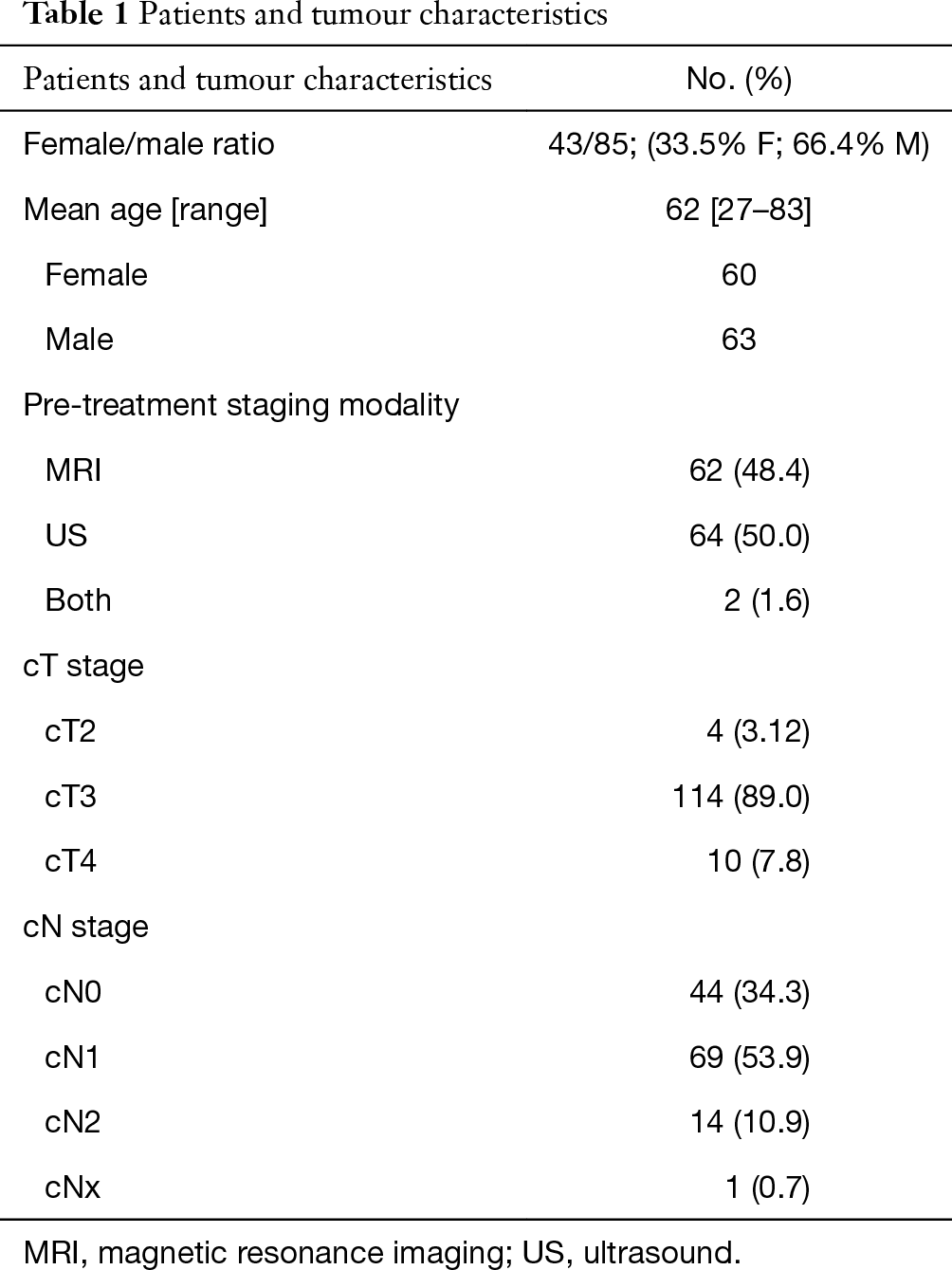 pCR was seen in 14.96% (19 patients) of participants. 58.26% (74 patients) of patients displayed partial response and TN staging did not change in 26.77% (34 patients). There was no significant association between patients and tumour characteristics and response to treatment (Table 2). 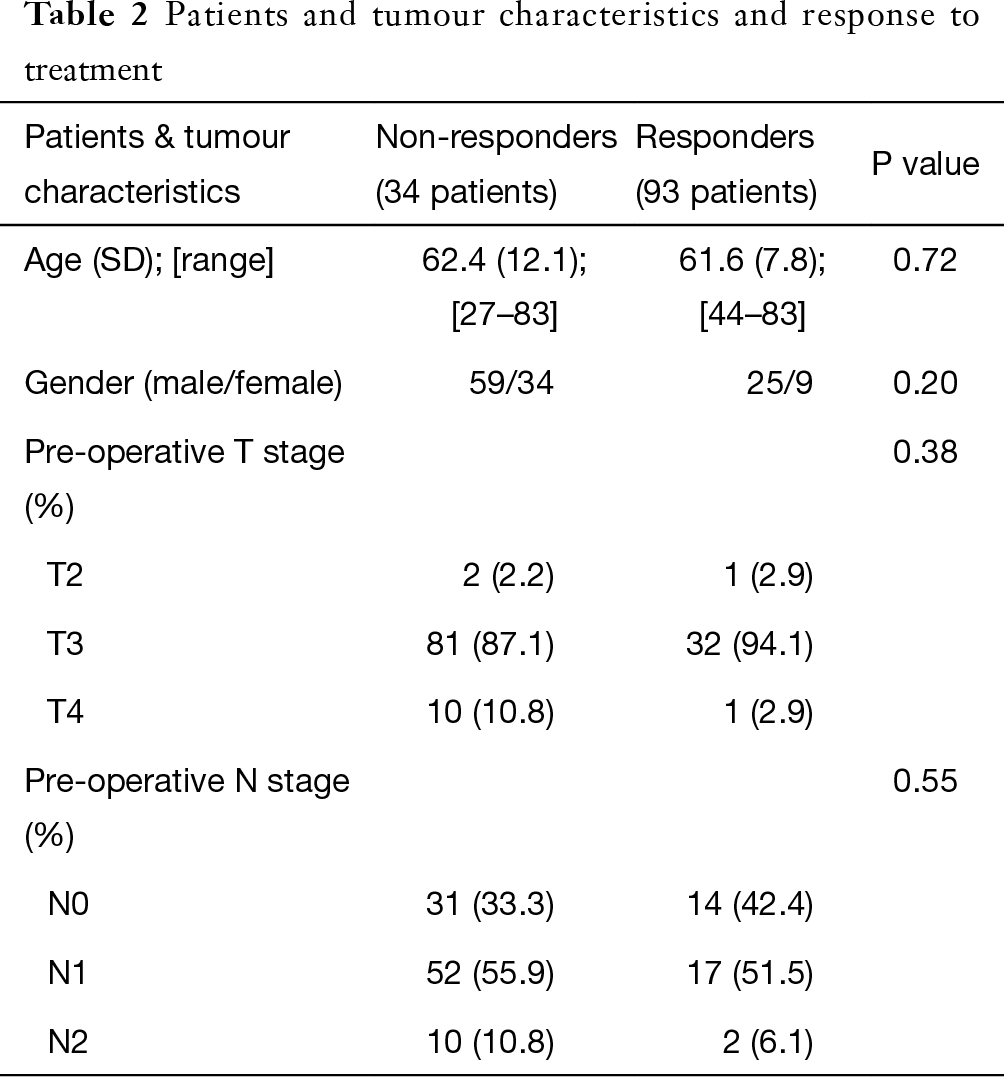 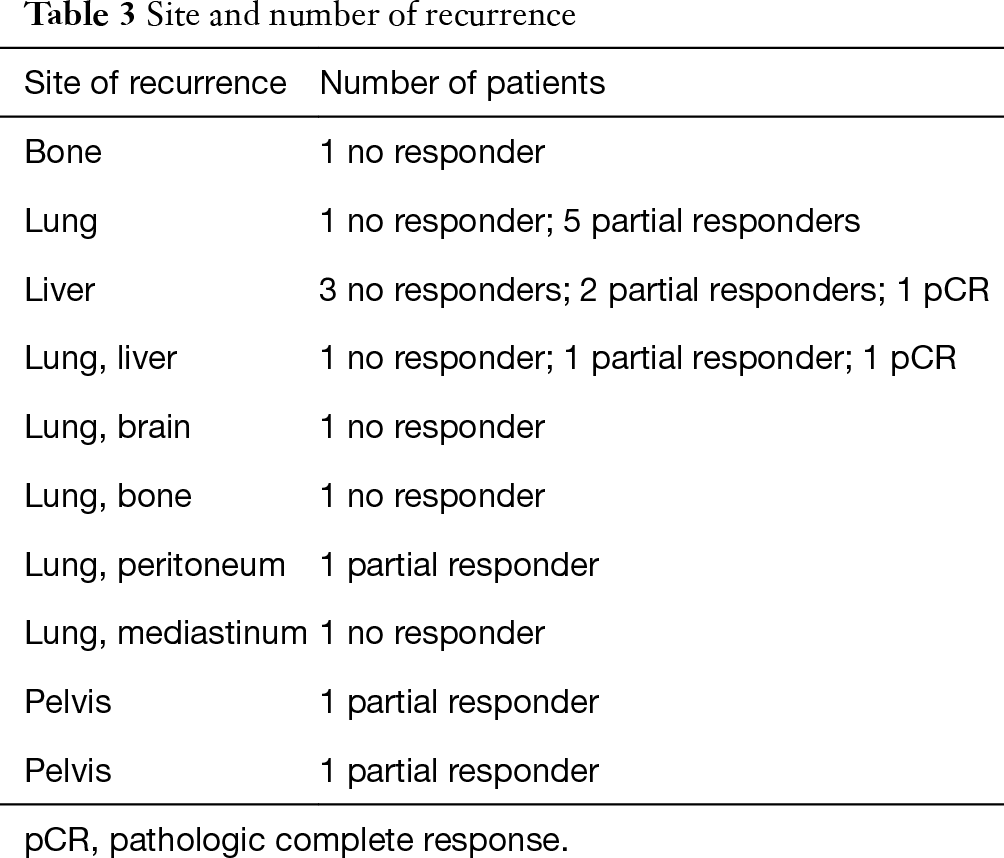 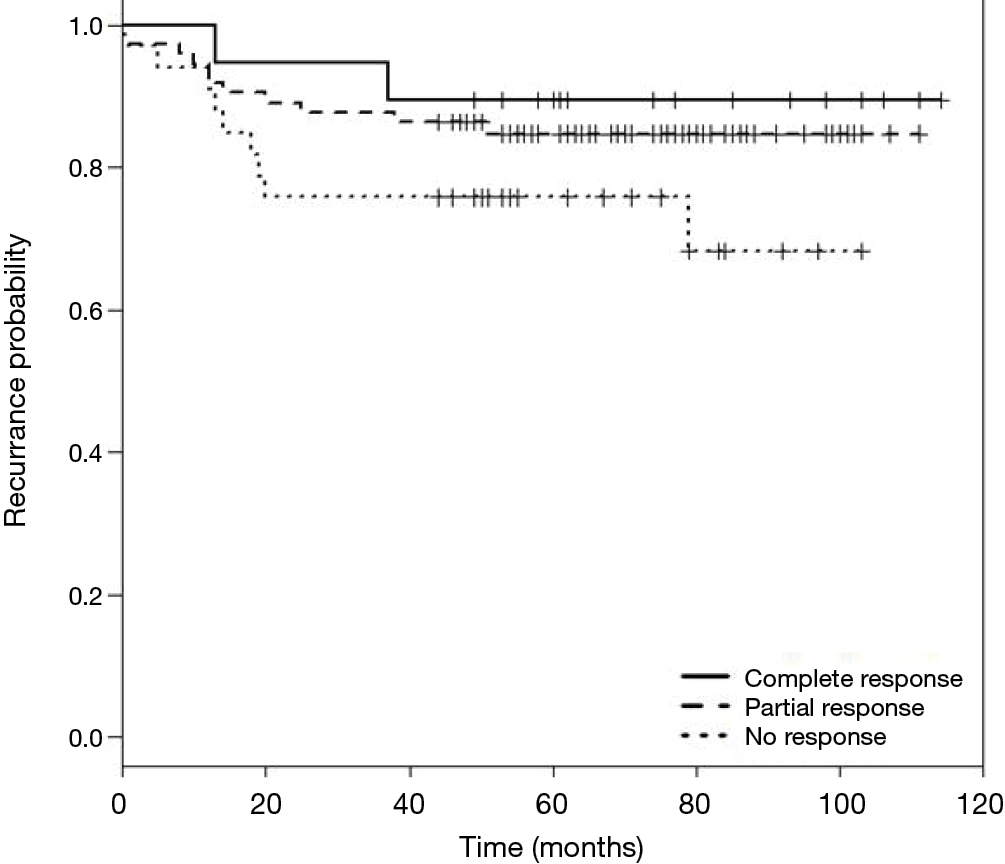 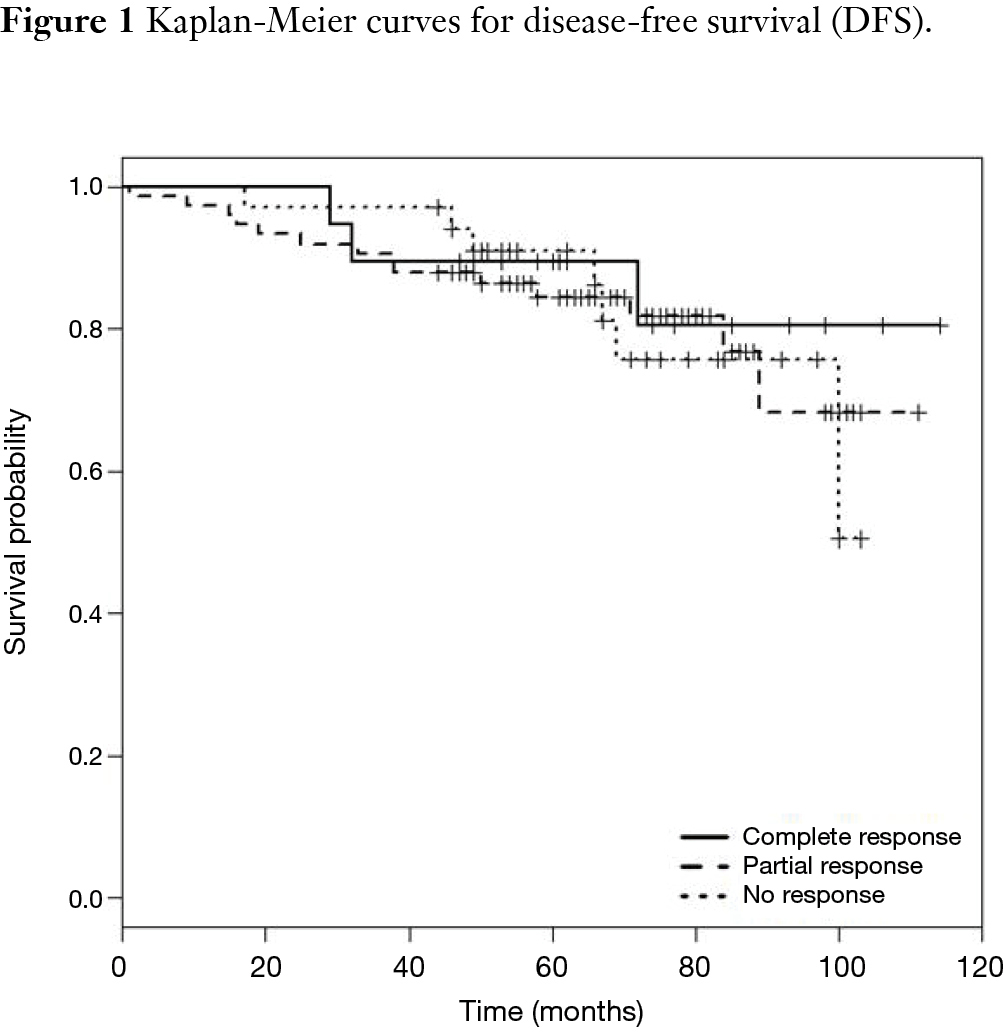 To our knowledge, the data presented in this study is one of the largest single-institution reports in the Australian literature looking at response rates and long-term outcomes of patients with locally advanced, rectal adenocarcinoma.

In our study, 58.26% of the patients showed some response to preoperative treatment. pCR was found in 14.96% of patients, which is comparable to European studies which reported rates of 11–16% (1,2,16). None of our patients with complete response to neoadjuvant treatment showed local recurrence. A lower rate of distant failure was observed in the pCR group compared with the other two groups and partial responders had less recurrence than non-responders.

In partial responders, DFS and OS were 85.1% and 90.5% and in non-responders were 73.5% and 82.3% respectively. Table 4 demonstrates recurrence and cancer-related death of the three groups of responders.

This study revealed that preoperative chemoradiation for locally advanced adenocarcinoma of the rectum resulted in a pathologic response of the primary tumour and lymph nodes in the majority of patients studied. Our results indicate pCR is achievable in a proportion of patients and that response to pre-operative CRT can be used as a predictor of tumour recurrence rate and long-term outcome.

Ethical Statement: The study was approved by institutional ethics board (No. 218/12).