Colorectal cancer (CRC) is one of the most common malignant tumors of the digestive system, and its increasing rates of morbidity and mortality have attracted greater attention in recent decades (1). Approximately 20 percent of CRC cases have reportedly already metastasized at the time of diagnosis, and the 5-year survival rate of metastatic CRC from 1975 to 2009 is only 5.5–12.5% (2). The incidence rate of CRC has increased by 22% from 2000 to 2013 among adults below the age of 50 years. Similarly, the mortality rates increased by 13% in patients under the age of 50 years between 2000 and 2014 (3). However, the invasion and metastasis mechanisms of CRC are poorly understood, which presents a significant problem for clinicians.

MicroRNA (miRNA) is an endogenous small non-coding RNA with a length of about 22 nucleotides, which play crucial roles in important biological processes by regulating multiple proteins expression. Acting at the post-transcriptional level (4-6), miRNA can modulate the expression of as much as 30% of all mammalian protein-encoding genes (7). In some cases, miRNAs are encoded by multiple loci, some of which are organized in tandemly co-transcribed clusters. With the in-depth research on miRNA in recent years, an increasing number of miRNAs have been found to play a key regulatory role in human cancers (8-10), including breast (11), bladder (12), lung (13), and gastric (14) cancers.

MiR-125 is a highly conserved miRNA transcribed from three different clusters in humans, namely, miR-125a on chromosome 19, miR-125b-1 on chromosome 11, and miR-125b-2 on chromosome 21. MiR-125b-1 and miR-125b-2 code for the same mature sequence, and their miRNAs (located in the introns of protein-coding genes) contain putative promoters that regulate transcription independently of their host gene, which differs from most miRNA mechanisms. In addition to paralogs that code for the same mature sequence, there are homologs (e.g., miR-125a) that code for different mature sequences, which contain the same seed region, and therefore, might have similar functions (15). According to previous investigations that employed a next-generation sequencing (NGS)-based profiling study of miRNAs (miRNome), miRNA-125 is present in metastatic CRC, which indicates that there is a close relationship between miR-125 and metastatic CRC (16,17). Additionally, miRNA-125 is positively correlated with hematopoietic malignancy (18). Based on the above findings, we speculate that miRNA-125 might participate in the regulation of CRC metastasis.

In recent decades, numerous studies have demonstrated that the invasion of cancer cells could be induced by several physicochemical factors (19-21); however, their relationship with tumor metastasis is still unknown. Tumor metastasis is a key process of cancer development and occurs via a series of steps, and is the main reason for treatment failure (22). Most CRC patients are only found after metastasis, and the prognosis is poor. Before invasion, cancer cells need to pass through the epithelial-to-mesenchymal transition (EMT) process to obtain migration and invasive properties (23). The essential steps in this process include the loss of cell polarity and achieving a mesenchymal phenotype, which are accompanied by decreased expression of the epithelial marker, E-cadherin, and increased expression of mesenchymal markers, such as N-cadherin and Vimentin (24). However, the potential function and underlying metastasis mechanism of CRC remain unclear, and thus, further investigation is needed (25).

In this study, we aimed to reveal the potential function and mechanism of the miR-125 family in CRC cell lines. We found that miR-125a-5p and miR-125b-1-5p could not only reduce the expression of their targeted gene [damage specific DNA binding protein 2 (DDB2)] but also inhibited the expression of epithelial markers and increased those of mesenchymal cell markers in cancer cells, which was mediated by DDB2. This study might provide helpful information in understanding the function and mechanism of miR-125 family-regulated CRC migration. We present the following article in accordance with the MDAR reporting checklist (available at https://jgo.amegroups.com/article/view/10.21037/jgo-22-1222/rc).

The SW480 cells were seeded into 96-well plates at a density of 4,000 cells per well and incubated overnight. Forty-eight hours after transfection, the cells were then treated with 20 µL of 3-(4,5-dimethylthiazol-2-yl)-2,5-diphenyltetrazoliumbromide (MTT, Sigma Aldrich, USA) solution [5 mg/mL in phosphate-buffered saline (PBS)] and incubated for 4 h at 37 ℃. Next, the medium was rapidly removed and the MTT crystals were solubilized in 100 µL dimethyl sulfoxide (DMSO). The optical density (OD) volume was determined at 490 nm for each well using a microplate spectrophotometer (BioTek, USA). The data represented the mean ± standard deviation (SD) of at least three independent experiments.

Briefly, the upper surface of the Transwell filter (8.0 µm in pore size) was coated with 40 µg extracellular matrix (ECM) gel before being air-dried overnight at room temperature. Approximately 4×104 cells were added into the upper chamber and cultured overnight. The cells were then transfected with the miRNA mimics/sponge for 6 h, respectively. After 72 h of incubation at 5% CO2 and 37 ℃, the cells invaded the opposite surface of the filter. The filters were fixed with 4% paraformaldehyde and stained with crystal violet, and the cells on the upper surface were then removed completely with a cotton swab. Cell migration was observed under light microscopy (ZEISS, German) at a magnification of ×100. The cells were then lysed using an extraction buffer (Millipore, ECM210, USA) and collected for the detection of OD at 570 nm; the OD value of the treated cells was normalized to the control. Tumor cell invasiveness was defined as the average OD of the cells.

The SW480 cells were seeded into 48-well plates at a density of 10,000 cells per well and incubated overnight, then co-transfected with pTA-8×Luc, pRL-TK, and synthetic DDB2 including wild type (WT) or mutant type (MUT). After 48 h, the cells were rinsed with PBS and lysed using a 100 µL passive lysis buffer (PLB). The luciferase activity was assayed using the Dual-Luciferase Reporter Assay System (Promega, USA) and a luminometer. The luciferase activity of each lysate was normalized to the activity of Renilla luciferase driven by the constitutively expressing promoter in the pRL-TK vector.

The differences in the invasion rate and protein expression levels between the treated cells and the controls were assessed by one-way analysis of variance (ANOVA) method followed by the standard student t-test analysis. A P value of less than 0.05 was considered statistically significant (P value <0.05). Each experiment was performed at least three times. Computer-based calculations were conducted using SPSS version 20 (SPSS Inc., Chicago, Illinois, USA). 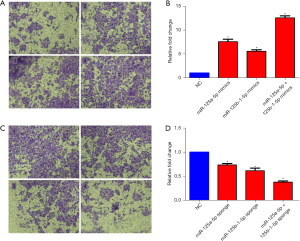 To investigate the potential mechanism of miRNA-125 in regulating colorectal invasion, we primarily predicted DDB2 as the miRNA-125 downstream via crossover analysis in the miRBase, miRDB, and TargetScan databases (Figure 3A). The results showed miR-125a-5p and miR-125b-1-5p bind to the 3'UTR region of DDB2 at positions 221–228 through the “GAGUCCCU” motif. 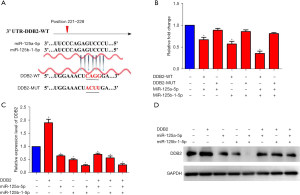 We applied a Dual-Luciferase Reporter Assay to verify the binding sites. We constructed the WT and MUT (CAGG mutated to ACUU) luciferase reporter plasmids of the DDB2 3'UTR region (Figure 3A), then and co-transfected these with miR-125a-5p and miR-125b-1-5p into SW480 cells, respectively. The results showed that compared to the MUT-DDB2 groups, both miR-125a-5p and miR-125b-1-5p could reduce the expression of WT DDB2 with a synergistic effect (Figure 3B), which is consistent with the invasion assay.

We then explored the influence of miR-125a-5p and miR-125b-1-5p on DDB2 expression levels in-depth. A DDB2 expression vector plasmid was constructed for RT-PCR and the Western blotting assay. The qPCR results confirmed DDB2 overexpression and verified that miR-125a-5p and miR-125b-1-5p could reduce the expression of DDB2 in a synergistic manner (Figure 3C), which was confirmed by protein detection (Figure 3D). The gray value of Western binds was also calculated (Figure S1).

DDB2 was reported to inhibit CRC invasion, and we also detected the DDB2 expression level in primary and metastatic tissues by qRT-PCR. The results showed that DDB2 was significantly down-regulated in the metastatic niches (Figure S2), which is consistent with previously reported findings.

To evaluate the role of DDB2 in miR-125-induced colorectal cell invasion, we transfected the cells with miR-125a-5p and miR-125b-1-5p mimics, respectively, based on DDB2 overexpression. The results revealed that since miR-125a-5p and miR-125b-1-5p increased cell invasion (Figure 4A) by 1.76 and 1.72 folds, respectively (Figure 4B), DDB2 still suppressed miR-125-induced cell invasion compared to the miR-125-overexpressed colorectal cells (Figure 2A). 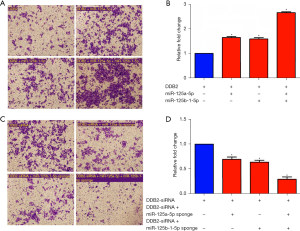 Additionally, we transfected cells with miR-125a-5p and the miR-125b-1-5p sponge, respectively, based on DDB2 depression by small interfering RNA (siRNAs). The results showed that DDB2 suppression covered miR-125 sponge-reduced cell invasion (Figure 4C), which is consistent with Figure 4D. These results indicate that miRNA-125a-5p and miR-125b-1-5p induce CRC cell invasion by inhibiting DDB2. 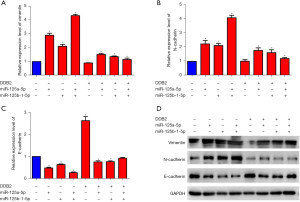 CRC is the second most common tumor in the gastrointestinal system. It is associated with high rates of morbidity and mortality, and the incidence of morbidity in young adults is increasing every year, which is a great threat to human health. Unfortunately, the cause of CRC occurrence is still not clear. It is generally believed to be associated with eating habits, with the high consumption of animal fats and proteins as well as low-fiber diets being more likely to cause CRC. Meanwhile, other factors, including genetic susceptibility and pre-cancerous lesions associated with the intestinal tract, are also correlated with CRC (26,27).

The majority of early-stage patients have no obvious symptoms, and most patients are discovered after tumor metastasis. At present, the major prognostic method for CRC involves the TNM staging system (defined by the Tumor, Node, and Metastasis), which determines the treatment decisions and outcomes of patients with CRC. The purpose of staging is to understand the progression of the tumor, guide the proposed treatment plan, and estimate the prognosis of patients (26,28). The liver is the main target of CRC metastasis, and occurs via miRNA regulation; however, the detailed mechanism has not yet been elucidated (29-31).

Moreover, DDB2 is a master suppressor of EMT in CRC. EMT is the process by which epithelial-derived tumor cells transform into stromal cells and acquire the ability to invade and migrate. It exists in multiple physiological and pathological processes in the human body and plays important roles in tissue remodeling and cancer metastasis. Colorectal epithelial cancer cells lose their polarity through EMT and obtain high interstitial phenotypes, such as migration and invasion. To comprehensively elucidate the mechanism of miR-125a-5p and miR-125b-1-5p-induced colorectal invasion, we detected the effect of miR-125a-5p and miR-125b-1-5p on EMT. The results in Figure 5 revealed that miR-125a-5p and miR-125b-1-5p activate the EMT process in CRC cells by inhibiting DDB2. EMT of malignancy cells increased cancer metastatic ability and chemoresistance (34). Increased EMT is also correlated with the formation of cancer stem cells (CSC) (35). Additionally, accumulating evidence indicates that EMT increased CSC population, hence resulting CSC-mediated clinical relapse (36). In our study, we found miRNA125a-5p and miRNA125b-1-5p induced epithelial-mesenchymal transition of CRC, so we proposed miRNA125a-5p and miRNA125b-1-5p could increase CSC properties, including chemoresistance and recurrence. The EMT process contributes to increased CSC population through intra-cellular crosstalk, suggesting it may be reasonable to attenuate EMT process for treatment of malignant CRC (36). It seems a promising strategy of blocking miRNA125a-5p and miRNA125b-1-5p expression to inhibit colorectal EMT and CSC for drug development.

Our results indicated that miR-125a-5p and miR-125b-1-5p could activate the EMT process by down-regulating DDB2, and thus, enhance the metastatic ability of CRC cells. Our findings preliminarily explored the mechanism of CRC metastasis, which may provide helpful information for future treatment.

Reporting Checklist: The authors have completed the MDAR reporting checklist. Available at https://jgo.amegroups.com/article/view/10.21037/jgo-22-1222/rc

Conflicts of Interest: All authors have completed the ICMJE uniform disclosure form (available at https://jgo.amegroups.com/article/view/10.21037/jgo-22-1222/coif). The authors have no conflicts of interest to declare.

Ethical Statement: The authors are accountable for all aspects of the work in ensuring that questions related to the accuracy or integrity of any part of the work are appropriately investigated and resolved. The study was conducted in accordance with the Declaration of Helsinki (as revised in 2013). The methods were performed in accordance with the approved guidelines by the Ethics Committee of The First Affiliated Hospital of Nanjing Medical University (No. 2010-SR-091). Informed consent was obtained from all subjects.