While significant progress has been made in recent years for the treatment of pancreatic cancer, its pathogenesis remains to be fully elucidated (1). An in-depth understanding of the characteristics of various cancers will help the development of novel therapeutic targets and strategies, and provide clues for individualized treatment (2-4). Beclin1 was originally identified as a protein that interacts with anti-apoptotic members of the B-cell lymphoma 2 (BCL2) family and acts as an apoptosis inducer and transcriptional repressor. Beclin1 regulates gene transcription and post-transcriptional processing (5,6). Tumor cells adapt to the hypoxic condition by using glycolysis instead of oxidative phosphorylation for adenosine triphosphate (ATP) generation, with the former metabolic pathway being oxygen-independent. Hypoxia inducible factor-1α (HIF-1α) is an important transcription factor that is highly upregulated under hypoxia (7).

Cellular response to hypoxia involves upregulating the expression of key glycolytic enzymes, including hexokinase 2 (HK2), glucose transporter 1 (GLUT1), lactate dehydrogenase A (LDHA), and pyruvate dehydrogenase kinase 1 (PDK1), and regulating the transcription of key enzyme target genes. Curcumin is a chemical component extracted from the rhizome of the Zingiberaceae and Araceae plants. Curcumin is a diketone compound derived from the rare pigment found in these plants (8-10). It has a wide range of antioxidant and anti-inflammatory activities, as well as inhibition of the mitochondrial cascade. Additionally, it has shown significant antitumor activity. Therefore, this current study investigated whether curcumin could inhibit the growth of pancreatic cancer cells by blocking the HIF-1α-mediated glycolytic pathway. We present the following article in accordance with the MDAR reporting checklist (available at https://jgo.amegroups.com/article/view/10.21037/jgo-22-802/rc).

Cell proliferation was detected using the CCK-8 assay. Cells in the logarithmic growth phase were digested and resuspended in culture medium. Approximately 8×104 cells/mL were seeded in 96-well plates overnight. The cells were treated with different concentrations of curcumin (20, 40, and 60 mM) and 0.1% dimethyl sulfoxide was used as the control. At three time points of 24, 48, and 72 hours, 90 mL of fresh medium was added to the 96-well plate together with 10 µL CCK-8 solution.

Cells were washed twice with pre-cooled phosphate buffered saline (PBS) and the cell apoptosis assay was performed according to manufacturer’s instructions. Briefly, added 100 µL 1× binding buffer to each tube and then fully suspended the tumor cells. The dye was added and the cells were incubated for 15 minutes at room temperature in the dark, followed by addition of 300 µL 1× binding buffer suspension cells. The cell suspension was then transferred to a 5-mL flow cytometer tube protected from light and flow cytometry was performed within 1 hour.

A total of 1×105 cells were seeded in six-well plates and incubated overnight under hypoxic conditions before being treated with different concentrations of curcumin (20, 40, and 60 mM) and 5-FU for 48 hours. PANC-1 and SW1990 cells were blocked with 3% hydrogen peroxide for 15 minutes followed by incubation with primary antibody against Beclin1 (1:1,000) overnight at 4 ℃. The light staining was quantitatively assessed using the Image ProPlu digital Image Analysis System.

The total protein was extracted with radio-immunoprecipitation assay (RIPA) lysis buffer. Proteins were separated by SDS-PAGE and transferred to polyvinylidene fluoride membranes. Subsequently, the membranes were blocked with 5% skim milk and incubated with primary antibodies (both diluted 1:1,000) overnight at 4 ℃. The membranes were then incubated with anti-rabbit secondary antibody (diluted 1:5,000) for 2 hours at room temperature. The ECL kit was used to detect the protein bands, and the relative expression of each protein was quantified using the bioradiometric imaging system.

Cells in the logarithmic growth phase were digested and resuspended into a cell suspension. Approximately 1×104 cells/mL were seeded in 96-well plates overnight. Subsequently, 0.1 mL ATP releasing factor was added to each well, and the reaction was carried out for 5 minutes at room temperature. Another 96-well cell culture plate was taken and 0.1 mL of cytolysis was aspirated from each well of the first plate to the corresponding well of the second plate. The second plate was placed in an automatic porous fluorescence detector and 20 mL ATP reaction solution was added to each well with an automatic sampler. The fluorescence intensity for 10 times was detected immediately. The glycolytic capacity of the cells was analyzed and measured.

The SPSS version 19.0 and GraphPad Prism 5.0 software were used to analyze and plot the data. All experiments were repeated three times. Measurement data were expressed as mean ± standard deviation and analyzed using the t test. A P value <0.05 was considered statistically significant. 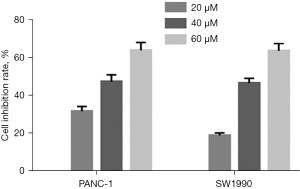 The effects of curcumin on cell clone formation ability, apoptosis, and cell cycle

The clone formation experiments showed that treatment with 30 µM curcumin significantly reduced the number of colonies compared to control cells, and the volume of cell colonies was smaller than that in the control group. Cell cycle analysis by flow cytometry revealed that the number of cells in the G0/G1 phase was significantly increased, while the number of cells in the G2/M phase was decreased after treatment with curcumin. These results suggested that curcumin inhibited pancreatic cell carcinoma cell proliferation in a dose-dependent manner (Figure 2). 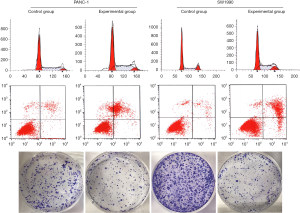 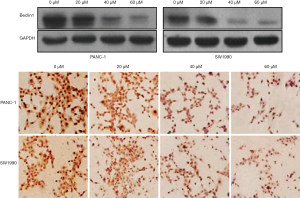 Curcumin inhibits the interaction between Beclin1 and hypoxia-inducible factor-1α

These results suggested that curcumin inhibited the expression of Beclin1, thereby reducing the binding between Beclin1 and HIF-1α in hypoxic pancreatic cancer cells (P<0.05) (Figure 4).

Figure 4 Co-immunoprecipitation analysis of the effect of curcumin on the interaction between Beclin1 and HIF-1α. HIF-1α, hypoxia-inducible factor-1α; GAPDH, glyceraldehyde 3-phosphate dehydrogenase.

To investigate whether curcumin affects the glycolysis of hypoxic pancreatic cancer cells by regulating the ubiquitination of HIF-1α, pancreatic cancer cell lines PANC-1 and SW1990 were treated with different concentrations of curcumin (20, 40, and 60 µM). The protein expression of HIF-1α was significantly decreased after treatment with 40 and 60 µM curcumin. The expression levels of KSP70, KSP90, and von Hippel-Lindau protein (pVHL) were significantly decreased after treatment with different concentrations of curcumin, while the expression levels of PHD and RACK1 were significantly elevated (P<0.05) (Figure 5). 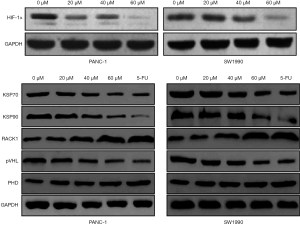 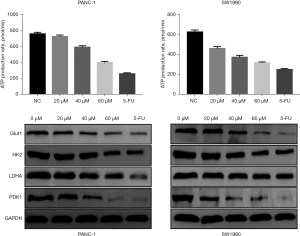 The “Warburg effect” refers to the preference of tumor cells for glucose metabolism by glycolysis, even under aerobic conditions (11). A large number of studies have confirmed that the enhanced glycolytic effect is closely related to the occurrence and development of tumors and plays an important role in the malignant progression of tumors (12-14). In this study, curcumin was found to inhibit the proliferation and glycolysis of human pancreatic cancer cells under hypoxic conditions. Similarly, CCK8 assays showed that curcumin inhibited the viability of pancreatic cancer cells under hypoxic conditions, and the cell cycle was arrested in the G0/G1 phase (15). Pancreatic cancer has been shown to be closely related to glycolysis. In this study, gene set enrichment analysis was performed to analyze the gene sets related to glycolysis, which revealed genes related to biological processes. Univariate and multivariate Cox proportional regression models were used to screen genes associated with prognosis. Mrnas significantly associated with overall survival were identified in Cox proportional regression models for pancreatic cancer. Based on this genetic profile, patients were divided into high-risk and low-risk subgroups. In this study, a gene marker associated with glycolysis was developed to predict survival in patients with pancreatic cancer. This finding provides novel insights into the mechanism of glycolysis and is of great application value for the identification of pancreatic cancer patients with poor prognosis.

In vitro and in vivo studies on hepatocellular carcinoma and pancreatic cancer cell lines and nude mouse models of liver orthotopic tumor revealed the inhibitory effect of salinomycin on the growth of liver and pancreas tumors. The relevant results were recently published in the International Journal. The research is considered a breakthrough in the fight against liver cancer and pancreatic cancer (16). Ginsenoside PPD has significant anti-pancreatic cancer effect and is expected to become a new therapeutic drug for pancreatic cancer, other drugs used to treat pancreatic cancer include gemcitabine, 5-fluorouracil, capecitabine, oxaliplatin, paclitaxel and erlotinib (17).

Reporting Checklist: The authors have completed the MDAR reporting checklist. Available at https://jgo.amegroups.com/article/view/10.21037/jgo-22-802/rc

Conflicts of Interest: All authors have completed the ICMJE uniform disclosure form (available at https://jgo.amegroups.com/article/view/10.21037/jgo-22-802/coif). The authors have no conflicts of interest to declare.