Does chemotherapy regimen matter in the neoadjuvant treatment of esophageal cancer?

Esophageal cancer is a global disease, impacting 604,000 new patients in 2020 and was responsible for one out of 18 cancer deaths in the same year (1). In America, the incidence of esophageal cancer is roughly 4 per 100,000 people with a 5-year survival rate of approximately 20% according to SEER data (2). Between 2010 to 2014, there were 11,360 esophagectomies performed in the United States according to research utilizing data from the NCDB database, the majority of whom had neoadjuvant therapy prior to surgery (3). Chemoradiotherapy was initially evaluated as definitive treatment of patients. It has since evolved into a method of treatment in the neoadjuvant, primary, and adjuvant setting and changed the landscape of cancer care (4). The first published trial regarding trimodality treatment utilized a combination of 50 Gy, fluorouracil, and cisplatin which conferred 3.6 months greater in terms of median survival when compared to radiation alone (5). Subsequent studies compared trimodality therapy to surgery alone, but many did not find a significant survival benefit. In 2008, the CALGB 9781 trial was published comparing trimodality therapy consisting of 50.5 Gy, cisplatin, and 5-flourouracil (5-Fu). 56 patients enrolled in the trial with 30 randomized to neoadjuvant chemoradiation prior to surgery vs. 26 randomized to surgery alone. A nearly 3-year increase in median overall survival (OS) was observed in the neoadjuvant chemoradiation prior to surgery group (6). The CROSS trial was published in 2012 and randomized patients to receive 41.4 Gy, carboplatin, and paclitaxel vs. surgery alone. Median OS in the neoadjuvant chemoradiotherapy group was more than double that of the surgery alone group (49.4 vs. 24 months) (7).

These studies have established neoadjuvant chemoradiation as the preferred treatment regimen for locally advanced tumors- those tumors which are either larger in size or with high-risk features or clinically node positive (8). Currently, the National Comprehensive Cancer Network (NCCN) guidelines recommend paclitaxel and carboplatin (carbotaxol) a preferred pre-operative chemotherapy regimen with fluorouracil and cisplatin as a recommended therapy regimen (8). While each of these therapies was formally evaluated against surgery alone in patients, the results of comparing the two therapies against each other has not been conclusive in determining a superior therapy. We sought to compare the degree of pathologic response after surgery in patients that received these therapies. We present the following article in accordance with the STROBE reporting checklist (available at https://jgo.amegroups.com/article/view/10.21037/jgo-22-70/rc).

The study was conducted in accordance with the Declaration of Helsinki (as revised in 2013). The study was approved by the Methodist Health System IRB (No. 037.HPB.2018.R). Informed consent was waived due to the retrospective nature of this study. We conducted a retrospective analysis of an identified previously treated patient cohort. Electronic medical record (EMR) from a single surgical group was searched using current procedural terminology (CPT) codes (codes 43107, 43108, 43286, 43287, 43288, and 43289) as performed to identify all esophagectomies performed between 2012–2020. Patient charts were then accessed to assess whether they had received esophagectomy for cancer and furthermore whether they had received neoadjuvant therapy was assessed. Meticulous effort was made to avoid misclassification bias. Amongst those who had neoadjuvant chemoradiotherapy, those who had received radiation with chemotherapy regimens that included either cisplatin and 5-Fu or carbotaxol were identified and included in analysis. Patients were excluded from final analysis if they did not undergo these interventions or final pathology was unavailable. Demographic information, comorbidities, tumor staging, neoadjuvant treatment, surgical approach, and pathologic response were the major focus of our data collection. All patients were staged using American Joint Committee on Cancer (AJCC) 8th edition classifications. Pathologic response to neoadjuvant therapy was determined using the modified Ryan score.

Groups were stratified by chemotherapy regimens and variables were subjected to both univariate analysis and independent samples t-test to identify significant differing factors. Statistical analysis was conducted using JASP (version 0.15, 2021).

A total of 163 patients were identified, 145 of whom had esophagectomy performed for malignancy. Amongst those who had esophageal cancer, 100 patients received neoadjuvant therapy and 82 patients received triple therapy consisting of either radiation with cisplatin and 5-Fu or carbotaxol. Search strategy outlined in Figure 1. Of the 82 patients included for analysis, 74 (90.2%) received carbotaxol for their preoperative therapy and 8 (9.8%) received cisplatin/5-Fu as their preoperative chemotherapy. Median age for each group was 63 years for the carbotaxol group and 69 years for the cisplatin and 5-Fu group. There was no significant difference in gender (P=0.673) and presence of comorbidities including diabetes (P=0.242), hypertension (P=0.833), tabacco use (P=0.827), dyslipidemia (P=0.711), congestive heart failure (CHF) (P=0.403), and chronic obstructive pulmonary disease (COPD) (P=0.680) between patients who had received each chemotherapy regimen (Table 1). 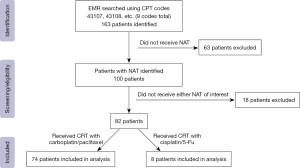 In terms of tumor characteristics. In the patient group treated with carbotaxol, 67/74 patients (90.5%) had adenocarcinoma and 7/74 patients (9.5%) had squamous cell carcinoma (SCC) of the esophagus. In the patient group treated with cisplatin and 5-Fu, 4/8 patients (50%) had adenocarcinoma and 4/8 (50%) had SCC (P=0.001). Patients in both groups had a median duration of neoadjuvant chemotherapy of 5.7 weeks (P=0.972) and were treated with neoadjuvant radiation for a median duration of 6 weeks in the carbotaxol group and 5.5 weeks in the cisplatin and 5-Fu group (P=0.610) prior to surgery. Both type of surgery (open, laparoscopic, or robotic) (P=0.484) and margin status (P=0.857) were not significant between the two groups. There was also no significant difference pathologic staging (P=0.433) and tumor features such as the presence of Barrett’s esophagus (P=0.519) and signet cell features (P=0.363) (Tables 2,3). Of note, there were 9% of the group that received carbo/taxol that had signet cell features. These were clearly staged as esophageal cancer and this pathologic finding demonstrates that signet cell features are not limited to gastric cancer only.

This study provides one of the first findings of no significant difference in pathologic response relative to two utilized neoadjuvant chemoradiotherapy regimens for esophageal cancer. Our data suggests that either regimen of chemotherapy, combined with radiation therapy, results in equivalent pathologic response. Therefore, we recommend that the regimen that has the least toxicity be considered for neoadjuvant therapy (NAT).

Prior studies have evaluated the rate of complete pathologic responses after specific TMT regimens but none have evaluated the degree of pathologic response between these regimens (9-11). Blum Murphy et al. demonstrated that a complete response has shown a significant effect on OS and disease-free survival (DFS) with a large retrospective patient cohort (12). The different degrees of response do however seem to hold significance in terms of patient prognosis and their evaluation. Takeda et al. used the Ryan and modified Ryan score applied to pathologic specimens for 134 patients treated with radiation, taxane, and platinum based neoadjuvant therapy to predict patient outcomes (13). They were able to find that the scores were a significant predictor of survival as well as both systemic and lymphatic recurrence. The results of prior retrospective studies have also showed differing results with regard to outcomes for patients after neoadjuvant chemotherapy. Sanford et al. utilized cisplatin and 5-Fu as a reference regimen and found that carbotaxol significantly improved OS (11). Conversely, Jiang et al. when comparing the two regimens found no significant therapy when comparing the two regimens as trimodality therapy in the neoadjuvant setting but did find cisplatin and 5-Fu superior to carbotaxol as definitive therapy in 3-year OS (10). From our data using the Ryan score as a predictor of long-term patient outcomes, it would appear that both regimens would offer patients comparable DFS and OS.

With regards to toxicity, in the original phase 3 CALGB 973 trial 57% of those who received pre-operative therapy had a reported Grade 3 toxicities or higher (6). In the phase 2 results from the CROSS trial, 48% of those receiving therapy had grade 3 toxicities or higher (14). Subsequent retrospective studies have also compared the toxicity between the two regimens. Steber et al. evaluated both regimens in a retrospective cohort of patients treated both with both tri-modality therapies and found a significant increase in weight loss in the cisplatin and 5-Fu group as compared to the carbotaxol group (9). Furthermore, they found a significant difference between responses after receiving regimens which was not repeated by our data. Münch et al. retrospectively examined both regimens in the neoadjuvant setting for SCC. They found grade 3 toxicities in the cisplatin and 5-Fu group to be at a higher rate than carbotaxol (41% vs. 25%) (15). These results would suggest the preferred regimen for trimodality treatment as carbotaxol given the higher propensity for observed toxicities seen with cisplatin and 5-Fu.

There are limitations to this study. The cohorts receiving each therapy are skewed towards patients who received carbotaxol. This is due to our EMR only being able to access patient data starting in 2012 when the preferred neoadjuvant treatment changed after the CROSS trial in favor of carbotaxol. Another limitation is the length of time in which patient data was collected, a more contemporary analysis with a shorter time interval might have yielded differing results. Additionally, patients with differing types of esophageal cancers (SCC and adenocarcinoma) were combined in treatment although this is how current national guidelines group treatments. Other limitations include the single institution where patients were seen, which could have impacted outcomes as well as reduced our sample size compared to a multi-institutional study, and retrospective nature of the study.

This study examined and compared the degree and presence of pathologic response after trimodality treatment using either cisplatin and 5-Fu or carbotaxol. Our results add further evidence that there is no significant difference between these two regimens in terms of degree of pathologic response which is a significant predictor of long-term patient outcomes. Further efforts regarding the comparison of these chemotherapy regimens should incorporate the modified Ryan score.

Material from this paper was presented in abstract form at the 2022 Scientific Session of the Society of American Gastrointestinal and Endoscopic Surgeons (SAGES), Denver, Colorado, 16–19 March 2022.

Reporting Checklist: The authors have completed the STROBE reporting checklist. Available at https://jgo.amegroups.com/article/view/10.21037/jgo-22-70/rc

Conflicts of Interest: All authors have completed the ICMJE uniform disclosure form (available at https://jgo.amegroups.com/article/view/10.21037/jgo-22-70/coif). The authors have no conflicts of interest to declare.

Ethical Statement: The authors are accountable for all aspects of the work in ensuring that questions related to the accuracy or integrity of any part of the work are appropriately investigated and resolved. The study was conducted in accordance with the Declaration of Helsinki (as revised in 2013). The study was approved by the Methodist Health System IRB (Number 037.HPB.2018.R). Informed consent was waived due to the retrospective nature of this study.