Colorectal cancer (CRC) is the second leading cause of cancer-related mortality in the United States with an estimate of 45,230 new cases diagnosed in 2021 (1). The incidence and mortality rates of CRC have gradually declined due to improvements in screening and treatment (2). However, CRC mortality rates continue to be higher in Black compared to White patients. The driving mechanisms of this disparity are complex involving demographic and socioeconomic factors, which influence access to prevention, screening, and treatment (2-8). However, while screening disparities contribute to the increased stage at diagnosis in Black patients, differences in mortality rates between Black and White patients continue to exist in CRC even when matched for tumor characteristics (2,3,5).

In the United States, standard treatment modalities for locally advanced rectal cancer consist of surgical excision combined with either neoadjuvant chemoradiation, adjuvant chemoradiation, or short course radiation and chemotherapy, and most recently the addition of total neoadjuvant therapy (TNT) for advanced disease (9-11). Although these treatment regimens have been shown to improve local and distant control, the use of standard treatment is low in practice (12). The effect of various treatments on racial disparities in colon cancer has been previously shown in a Surveillance, Epidemiology, and End Results (SEER) study evaluating survival outcomes between Black and White patients when using a sequential matching process for tumor presentation and treatment (3). In this study, racial survival differences between White and Black patients with stage III disease lowered from 5.1% to 4.3% when matched for tumor characteristics. This difference was further reduced to 2.8% when matched by treatment type, suggesting treatment had an impact on the racial disparity (3). A National Cancer Database (NCDB) study evaluating patients with CRC also showed improved survival differences in Black compared to White patients when matched for treatment (5). Thus, ensuring equitable access to standard treatment is an important modifiable intervention that can ameliorate racial disparities and further supports investigation of the use of standard treatment in rectal cancer.

There are limited studies looking at factors affecting standard treatment in rectal cancer. We hypothesized standard treatment would be received less often in Black compared to White patients, with an associated detriment in survival. To elucidate possible trends and obstacles promoting racial disparities, we evaluated locally advanced rectal adenocarcinoma treatment patterns in the NCDB and sought to determine racial disparities in standard treatment and outcomes based on the receipt of standard treatment. We present the following article in accordance with the STROBE reporting checklist (available at https://jgo.amegroups.com/article/view/10.21037/jgo-22-542/rc).

The study was conducted in accordance with the Declaration of Helsinki (as revised in 2013). The study was determined to be exempt by the University of Southern California institutional review board and individual consent for this retrospective national database analysis was waived. We queried the NCDB, a clinical oncology database sourced from more than 1,500 Commission on Cancer (CoC)-accredited facilities throughout the United States, utilizing user files from 2004 to 2014, for patients ≥18 years old with clinical and pathologic stage II–III rectal adenocarcinoma. We excluded patients with stage 0 and stage I disease as surgical management is the mainstay of treatment, and also excluded patients with stage IV disease as standard treatment varies widely in this population. Patients who received no treatment or were missing follow up data were also excluded. A Consolidated Standards of Reporting Trials (CONSORT) diagram depicting our inclusion and exclusion criteria is shown in Figure 1. 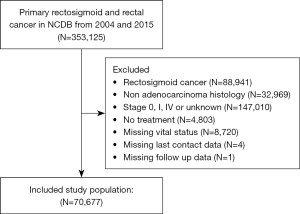 Our main analysis evaluated whether standard treatment was associated with race, and whether survival was associated with standard treatment. In our survival analyses, we censored patients for loss to follow-up. We controlled for demographic (age, sex, race, ethnicity, and insurance status), biologic [grade and Charlson-Deyo Comorbidity Index (CCI)], treatment facility (academic vs. community or integrated network and facility location), geographic (income, education, and population density associated with zip code, and distance from treatment facility), and temporal (year of diagnosis) characteristics. These covariates are detailed in Table 1.

Patient and facility characteristics for standard vs. nonstandard treatment

In an unadjusted analysis, we compared the distribution of patient characteristics by receipt of standard vs. nonstandard treatment and tested for statistical significance with a Pearson chi-squared test. We plotted survival curves using the Kaplan-Meier estimator, stratifying by standard vs. nonstandard treatment and by race and stage. We used a log-rank test to test for statistical significance.

We adjusted for confounders using multivariable logistic regression to examine whether race was associated with receipt of standard treatment. We used a Cox proportional hazards model to estimate survival differences between standard and nonstandard treatment. To examine whether survival differences were heterogeneous by race and stage of disease, we conducted subgroup analyses by incorporating a full set of interaction terms among receipt of standard treatment, race, and stage of disease. We estimated subgroup-specific hazard ratios (HRs) by recombining coefficients, with 95% confidence intervals (CIs) computed using the delta method.

A total of 70,677 patients with stage II (35,079) or stage III (35,598) rectal adenocarcinoma met our inclusion criteria. Median follow up was 44 months with an interquartile range of 25–73 months. In the patients who received radiation, the median dose was 4,500 cGy with an interquartile range of 4,500–4,860 cGy. Only 303 (0.4%) patients underwent 2,500 cGy in 5 fractions and an additional 123 (0.2%) received other doses in the range of 2,000–2,999 cGy. Patients who received standard treatment were more likely to be younger, male, White, Asian/Pacific Islander, and non-Hispanic. They were also more likely to have a lower CCI, have private or Medicaid insurance, live in a nonmetropolitan area, reside in a zip code with a higher median income and proportion of high school graduates, and have a more recent diagnosis, as shown in Table 1. Further patient and demographic characteristics by race are shown in Table S1.

*, standard treatment was defined as complete surgical excision with either neoadjuvant or adjuvant concurrent chemoradiation. We defined all other treatments listed as nonstandard.

Subgroup multivariate analysis—standard treatment as a function of race 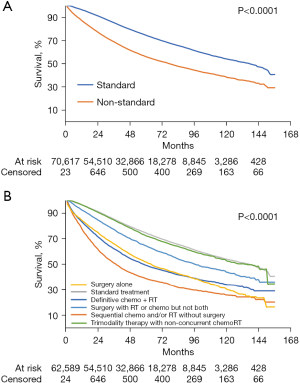 On multivariable Cox regression, after adjusting for confounders, nonstandard treatment was significantly associated with worse survival (HR: 1.69; 95% CI: 1.65–1.73; P<0.001) compared to standard treatment. Other independent predictors of lower survival included being Black, older, male, having treatment at a community or integrated network (vs. academic center), higher CCI, non-private insurance, and residing in a zip code with a lower median income or a lower proportion without a high school diploma (Table 5).

Subgroup multivariable analysis—survival in standard vs. nonstandard treatment by race

All findings were robust to complete case analysis.

Our study showed Black patients had lower rates of standard treatment irrespective of cancer stage and demographic characteristics, and is the first to include strict criteria for standard treatment utilizing concurrent chemoradiation. Although other demographic and socioeconomic factors were also independently associated with lower odds of receiving standard treatment, including age ≥80 years (0.241; 95% CI: 0.223–0.260), a CCI of 3 (0.697; 95% CI: 0.603–0.805), and unknown insurance (0.327; 95% CI: 0.293–0.365), we chose to focus our study on the disparity for Black patients as poor survival is known in this population and the OR was clinically significant at 0.75 (95% CI: 0.71–0.79). The unwarranted disparity in receipt of standard treatment showed increasingly worse outcomes for Black patients, and is supported by prior observational studies (3,5). In a matched NCDB study, the 5-year survival differences between Black and White patients with stage I–IV CRC decreased from a 9.2% absolute difference to 2.3% when matched for insurance and tumor characteristics. This absolute difference was not further reduced when matching by treatment in the whole cohort. However, there was improvement for those with stage II and III disease when stratified by stage, revealing differences in treatment may contribute to the overall racial survival disparity in select patients (5). Another recent NCDB analysis evaluated racial disparities in treatment for stage II and III rectal cancer at minority-serving hospitals. On multivariable analysis, treatment at minority-serving hospitals as well as Black race had lower odds of receiving standard treatment. After adjusting for covariates including standard treatment, patient characteristics, and disease specific variables, Black individuals continued to have a higher risk of mortality compared to White patients (15). This study presented similar findings to ours, however the definition of standard treatment was surgical resection (APR or LAR) as well as neoadjuvant and/or adjuvant systemic chemotherapy and any radiation therapy. It did not clearly define the importance of concurrent chemoradiation (as short course radiation was found to be used in a very small subset of patients). Furthermore, while consistent with our study in showing Black patients continued to have worse survival even when evaluated by subgroups who underwent standard treatment, there was no further evaluation of survival outcomes based on stage of disease.

Limitations of our study include the retrospective nature of the NCDB and potential coding and clerical errors. Data collection is only from CoC-accredited institutions which may not accurately reflect practices in all facilities nationwide. As with other retrospective studies, our results may be biased by additional confounding and unobserved patient and facility characteristics not encompassed within the NCDB. Additionally, while overall survival metrics are available, rectal cancer specific survival is not a collected datapoint and could not be assessed. Another limitation is our study was unable to examine short course radiation due to the small cohort represented within the NCDB. Furthermore, the complex and structurally integrated nature of racial disparities may involve intricate socioeconomic factors and predispositions beyond those stated here. However, while residual confounding factors may still exist, providing equal access to standard treatment should be a top priority and is not excused by unequal racial distributions by socioeconomic status. Our study demonstrates unequal rates of standard treatment in locally advanced rectal cancer between White and Black patients, as well as a widening of survival outcomes with nonstandard treatment. Establishing awareness of modifiable factors contributing to racial disparities is essential to ameliorate the differences in survival outcomes subjected to Black patients and to provide equal access to standard treatment.

The NCDB is a joint project between the CoC of the American College of Surgeons and the American Cancer Society. The database was established in 1989 and is a nationwide, facility-based, comprehensive clinical surveillance resource oncology data set that currently captures 72% of all newly diagnosed malignancies in the US annually. The data used in this study is derived from de-identified NCDB files. The CoC has not verified and are not responsible for the analytic or statistical methodology employed or the conclusions derived in this study. The American College of Surgeons has executed a Business Associate Agreement that includes a data use agreement with each of its CoC-accredited hospitals.

Reporting Checklist: The authors have completed the STROBE reporting checklist. Available at https://jgo.amegroups.com/article/view/10.21037/jgo-22-542/rc

Conflicts of Interest: All authors have completed the ICMJE uniform disclosure form (available at https://jgo.amegroups.com/article/view/10.21037/jgo-22-542/coif). EL receives salary support from the National Institute of Diabetes and Digestive and Kidney Disease through a K08 award. The other authors have no conflicts of interest to declare.

Ethical Statement: The authors are accountable for all aspects of the work in ensuring that questions related to the accuracy or integrity of any part of the work are appropriately investigated and resolved. The study was conducted in accordance with the Declaration of Helsinki (as revised in 2013). The study was determined to be exempt by the University of Southern California institutional review board and individual consent for this retrospective national database analysis was waived.