Apparent diffusion coefficient is a good marker in predicting the prognosis in colorectal cancer liver metastases: a diagnostic study

Colorectal cancer (CRC) is a common cancer that is estimated to have more than 1 million new cases a year globally (1). Most CRC cases are sporadic with no family history or significant genetic predisposition, and people >50 years are at the highest risk (2). A study has shown that the cumulative incidence of liver metastasis in patients with CRC in 5 years is up to 15% (3), and another study has shown that the incidence of liver metastasis within 5 years after diagnosis of CRC is up to 26.5% (4). Among them, left colon cancer is the most prone to liver metastasis (4). About 10% of CRC patients can have liver metastases at the first diagnosis, and it is important to determine whether there is liver metastasis before operation for the treatment and the prognosis of patients. Therefore, it is of great significance to accurately identify liver metastatic cancer before surgery. Pathological biopsy is the gold standard for diagnosing liver metastatic cancer, but there are some difficulties in preoperative biopsy. At present, clinical diagnosis of CRC liver metastasis (CRCLM) is mostly based on imaging, and there is a certain false-positive rate and false-negative rate. For example, ultrasound is the preferred imaging method for CRCLM. However, ultrasound is not ideal for liver tumors with deep location, small volume or lack of blood supply. Improving the diagnostic accuracy of imaging for CRCLM is highly significant. Due to its high sensitivity and specificity, magnetic resonance diffusion weighted imaging has been widely used to distinguish the benign and malignant characteristics of liver nodules (5-9). However, there are few studies that focus on the diagnostic value of apparent diffusion coefficient on CRCLM. The aim of the present study was to explore the diagnostic value of apparent diffusion coefficients based on magnetic resonance diffusion weighted imaging for CRCLM. We present the following article in accordance with the STARD reporting checklist (available at https://jgo.amegroups.com/article/view/10.21037/jgo-22-861/rc).

The data of 50 patients with CRCLM admitted to Hebei Yanda Hospital from January 2018 to December 2018 were retrospectively collected (a retrospectively diagnostic study), and the data of 50 patients with benign liver nodules were collected at the same time. Inclusion criteria of the CRCLM group were as follows: (I) primary lesion pathologically diagnosed with CRC, and isolated liver nodule postoperative pathological diagnosis as liver metastatic cancer (derived from CRC); (II) aged 18−65 years; (III) magnetic resonance diffusion weighted imaging examination performed at Hebei Yanda Hospital with apparent diffusion coefficient and so on before surgery; (IV) no lung, bone, or brain metastases; and (V) complete clinicopathological data. Exclusion criteria for the CRCLM group were as follows: (I) recurrent CRC; (II) primary liver cancer; (III) concomitant with other malignant tumors; (IV) abnormal portal vein and mesenteric arteriovenous structure; (V) hepatic insufficiency; (VI) special treatments, such as radiotherapy, chemotherapy, immunotherapy, and targeted therapy had been performed before surgery; and (VII) other serious diseases. The benign liver nodule group included patients aged 18−65 years with isolated benign nodules without the above diseases and no other serious diseases. The types of liver nodules in the benign liver nodule group were as follows: focal nodular hyperplasia, hepatic hemangioma, liver cyst, hepatic hamartoma, and mesenchymal tumors with 10 cases for each type. The study was conducted in accordance with the Declaration of Helsinki (as revised in 2013). This study was approved by the Ethics Committee of Hebei Yanda Hospital (No. 20220040) and individual consent for this retrospective analysis was waived.

Liver MAGNETIC RESONANCE DIFFUSION WEIGHTED IMAGING examination was performed by Siemens 3.0T magnetic resonance imaging (MRI) (Siemens, 3.0T, Shenzhen), and contrast medium (gadolinium spray glucosamine, 0.2 mmol/kg) was administered through the forearm intravenously at a rate of 2.5 mL/s. Dynamic scan was performed once with contrast agent group injection and saline flushing tube. Images were acquired for 6 consecutive times before and after enhancement, and liver MRI diffusion weighted imaging was obtained with apparent diffusion coefficient of the central part of the liver nodule.

The study variables were as follows: (I) general information, including age, sex, body mass index, smoking history, and drinking history; (II) apparent diffusion coefficient and diameter of liver nodules; (III) whether there was a combination of portal vein tumor thrombus; (IV) pathological characteristics of primary lesions, including number of metastatic regional lymph nodes, tumor T stage, primary lesion site, and differentiation degree of primary tumor cells; and (V) long-term prognosis: all patients underwent surgical treatment after diagnosis, and primary lesions and liver metastatic cancer were removed at the same time. Three-year follow up after surgery was conducted in clinic or via phone, and the 3-year survival rate of patients after surgery was observed.

Comparison of clinical data of patients in the 2 groups

There was no statistical difference in age, sex, body mass index, smoking history, drinking history, and liver nodule diameter between the 2 groups (P>0.05). Compared with the benign liver nodule group, the apparent diffusion coefficients of patients in the CRCLM group were significantly decreased [(1.14±0.26 vs. 2.06±0.57) ×10−3 mm2/s, P<0.001] (Table 1).

Comparison of clinical data of patients in the 2 groups 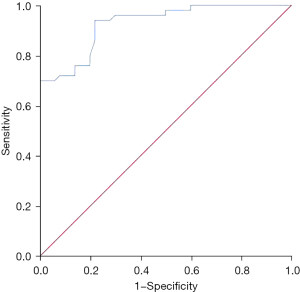 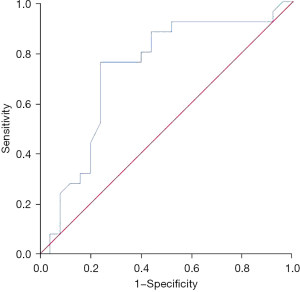 CRC is a common malignant tumor of the digestive tract. Preoperative treatment, surgery, and postoperative adjuvant therapy are important treatment strategies for a variety of malignant tumors (10-12). Individualized treatment of CRC needs to be based on detailed preoperative assessment. Currently MRI is a useful means to distinguish between CRCLM and benign liver nodules, and the apparent diffusion coefficient is a quantitative parameter in magnetic resonance diffusion weighted imaging. The findings of the present study indicated that the apparent diffusion coefficient had high value for distinguishing between CRCLM and benign liver nodules, and it had certain value for predicting the 3-year survival of patients after surgery. It was confirmed that the apparent diffusion coefficient was also related to the differentiation degree of tumor cells.

This study was a retrospective clinical study, and there were some limitations. Only about 10% of CRCLM occurred at the first diagnosis of CRC, and some patients chose preoperative treatment, so the number of cases was relatively insufficient. Moreover, due to the limited number of patients suffered with death in our study, we failed to study the risk factors of death using multiple Cox regression analysis. Further large sample size multicenter studies are needed.

The apparent diffusion coefficient decreased in patients with CRCLM, which was of high value for the diagnosis of CRCLM and was related to the clinicopathological features and prognosis of patients.

Reporting Checklist: The authors have completed the STARD reporting checklist. Available at https://jgo.amegroups.com/article/view/10.21037/jgo-22-861/rc

Conflicts of Interest: All authors have completed the ICMJE uniform disclosure form (available at https://jgo.amegroups.com/article/view/10.21037/jgo-22-861/coif). The authors have no conflicts of interest to declare.

Ethical Statement: The authors are accountable for all aspects of the work in ensuring that questions related to the accuracy or integrity of any part of the work are appropriately investigated and resolved. The study was conducted in accordance with the Declaration of Helsinki (as revised in 2013). This study was approved by the Ethics Committee of Hebei Yanda Hospital (No. 20220040) and individual consent for this retrospective analysis was waived.