Pancreatic cancer is the fourth leading cause of cancer death in the United States (1). Approximately 85–90% of pancreatic cancer is ductal adenocarcinomas (PDAC) (2). Far rarer is pancreatic adenosquamous carcinoma (PASC), which is an aggressive subtype accounting for 0.05–4.0% of cases (2-4). PASC is defined by the presence of at least 30% malignant squamous cell carcinoma mixed with PDAC (2,5). Squamous epithelial cells are not ordinarily present in pancreatic tissue and the mechanism by which PASC arises is unknown. It is believed that PASC may develop from squamous metaplasia of ductal cells secondary to inflammation (6) or, alternatively, that PASC is the result of two independent and simultaneously occurring masses that combine to form one cancer (7).

Compared to pure PDAC, PASC tend to be larger in gross tumor size and to have a higher histologic grade (5). They also more frequently present with metastatic disease and are associated with a worse prognosis (5,8) Data on treatment is limited and depends on stage. When tumors are localized, resection is the treatment of choice: several retrospective studies have found improved survival with surgical resection (5,9,10). Adjuvant platinum-based chemotherapy also appears to have survival benefit (4).

While palliative chemotherapy has demonstrated an improvement in survival for patients with stage IV pancreatic adenocarcinoma, there is a paucity of literature supporting its use in patients with adenosquamous histology (11,12). Unfortunately, surgical resection is an option in the minority of cases (11), and there is no data beyond case reports to guide the treatment of inoperable tumors (12,13). Physicians must decide whether to offer palliative chemotherapy to guide their practice. Given the paucity of literature on PASC, this study aimed to assess the role of chemotherapy for unresectable stage IV PASC. We present the following article in accordance with the STROBE reporting checklist (available at https://jgo.amegroups.com/article/view/10.21037/jgo-22-434/rc).

In this cross-sectional study, patients with International Classification of Diseases for Oncology, 3rd Edition (ICD-O-3) topography code C25 (malignant neoplasm of the pancreas) between 2006 and 2016 were abstracted from the National Cancer Data Base (NCDB). The NCDB is a joint program of the American College of Surgeons and American Cancer Society. Approximately 70% of incident cancer cases in the United States are reported to the NCDB from >1,500 national commission-accredited cancer programs.

Cases were filtered for adenosquamous carcinoma histology [8560]. These cases were further restricted to those with Stage IV disease who did not undergo surgery. Patients were then categorized according to receipt of chemotherapy; as soon as a patient received a single dose of chemotherapy, they were considered to have received chemotherapy. Cases with missing data on chemotherapy were excluded. We abstracted patient data including demographics, Charlson Deyo Comorbidity Score, income, insurance type; tumor grade, and academic versus nonacademic designation of the reporting hospitals. These variables were evaluated at the time of diagnosis. The study was conducted in accordance with the Declaration of Helsinki (as revised in 2013).

Patient, tumor, and hospital information were reported separately for patients who received chemotherapy and those who did not. Chi-Square tests were used to compare categorical variable and t-tests for continuous variables. To determine the association of patient, tumor and facility characteristics with receipt of chemotherapy, we performed multivariable logistic regression.

Characteristics of the study population

Characteristics of patients who did and did not receive chemotherapy

Compared to patients who did not receive chemotherapy, patients who did receive chemotherapy were younger (mean 62.6 vs. 70.1 years old; P<0.001) and more likely to have no comorbidities (72.0% vs. 58.7%; P<0.001). They were also more likely to be in a higher income bracket (P=0.013) and to have private insurance (P<0.001) (Table 1). Sex, Hispanic ethnicity, diagnosis year, treatment at an academic-affiliated hospital, and tumor differentiation were not significantly associated with receiving chemotherapy.

In a multivariable logistic regression model, younger age, absence of any comorbidities, and higher median income were identified as predictors of receiving chemotherapy (Table 2). 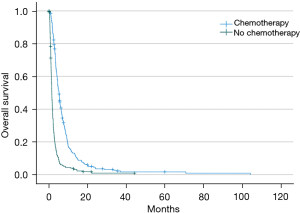 In this study, we used a national database to assess the role of chemotherapy in metastatic PASC. After controlling for confounding variables, we found that chemotherapy was independently associated with improved survival. However, this benefit was modest and overall survival in the cohort was poor. To the best of our knowledge, this is the largest population-based study on PASC outcomes.

The role of chemotherapy in PASC has been analyzed in several smaller papers, the largest of which was performed by Katz and colleagues using the California Cancer Registry (15). Among 95 patients with PASC, 46 presented with metastatic disease and 22 (52%) received palliative chemotherapy. The authors did not perform multivariate analysis due to the small numbers of these subgroups but reported that median survival was 4.5 months among patients who received palliative chemotherapy and 2 months for those who did not (15). Other analyses were limited to studying the impact of chemotherapy in the neoadjuvant or adjuvant setting. Wild and colleagues analyzed 62 patients who underwent surgical resection, 39 of whom received adjuvant chemotherapy (4). Receiving chemotherapy was associated with improved survival; however, this finding was not significant on multivariate analysis. In a similar, smaller analysis including 38 patients who underwent surgical treatment, Voong and colleagues (16) found improved outcomes in 19 patients who received adjuvant chemoradiation compared to the 19 patients who did not (13.6 vs. 8.6 months, P=0.005). A larger retrospective review of 838 non-metastatic PASC patients in NCDB demonstrated that survival was similar if patients received pancreatectomy or chemotherapy alone (7.2 vs. 9.2 months, P=0.504), but that the combination of neoadjuvant (19.6 months) or adjuvant therapy (19.4 months) with pancreatectomy significantly prolonged survival, again suggesting the benefit of multimodal therapy in the treatment of this aggressive malignancy (17).

There is no standard chemotherapy regimen for patients with advanced PASC, and knowledge of current practice is limited to case reports and institutional series. Thus, care for patients with PASC histology is guided by the pancreatic adenocarcinoma literature. In the adjuvant setting, published regimens include gemcitabine monotherapy, gemcitabine in combination with a platinum-based agent, or gemcitabine in combination with 5-fluorouracil, or capecitabine (4,6,18). There are two case reports of patients with metastatic PASC who survived at least 20 months. In one case, published in 2008, a 51-year-old woman was treated with 5-fluorouracil (FU) and cisplatin followed by S-1 and cisplatin (19). In the other, published in 2011, a patient survived for 29 months after being treated with gemcitabine and oxaliplatin followed by maintenance gemcitabine (20). The authors in both cases chose to use platinum agents because they are often effective against squamous cell carcinomas. The efficacy of platinum-agents and gemcitabine for squamous cell cancers has been theorized to be the result of a synergistic effect in which gemcitabine inhibits repair of DNA breaks caused by the platinum agent (12,13,21).

In 2015, the efficacy of platinum-agent combination chemotherapy for resectable PASC was investigated in the single-institution study performed by Wild and colleagues (4). They reported that 14 patients who had received platinum-containing adjuvant chemotherapy for at least two cycles had longer survival compared with the 25 patients who received chemotherapy without a platinum agent (median 19.1 vs. 10.7 months, P=0.015). Unfortunately, we did not have access to the chemotherapy regimens used in this NCDB analysis. However, we support further research to assess the optimal choice of chemotherapeutics in the metastatic setting.

Our study had several other limitations. First, because of its retrospective nature, it is difficult to imply causation. We adjusted for patients’ clinical variables in the multivariable cox proportional hazards regression model, but this may not account for all the potential confounders. Second, the generalization of results from NCDB analysis is limited, given that it is hospital-based data, missing outpatient clinic information. Third, we did not adjust for the immortal time bias. Patients who were slated to start chemotherapy but died before chemotherapy could be initiated were counted as having not received chemotherapy, thus creating a source of bias. Lastly, other important pieces of information, such as patient performance status and specific pathological information, were also missing. Quality of life metrics were also unavailable and would have also been useful to help characterize the impact of chemotherapy. Any potential survival advantage associated with treatment should ideally also be associated with a reasonable risk: benefit value on the quality of that time gained. Prospective studies involving patients with metastatic PASC are needed to delineate optimal treatment. However, given that prognosis is likely dismal even with the best currently available treatments, the discovery of novel targets or agents is paramount to achieving improved outcomes.

The prognosis of patients with metastatic PASC is uniformly poor and treatment is typically guided by pancreatic adenocarcinoma guidelines and algorithms. Multicenter prospective randomized trials are needed to determine the optimal treatment strategy for patients with PASC. This large retrospective study from a high-quality national database contributes important data to clinicians and patients, strengthens the case to pursue additional trials and supports the consideration to offer chemotherapy to patient with metastatic PASC.

Reporting Checklist: The authors have completed the STROBE reporting checklist. Available at https://jgo.amegroups.com/article/view/10.21037/jgo-22-434/rc

Conflicts of Interest: All authors have completed the ICMJE uniform disclosure form (available at https://jgo.amegroups.com/article/view/10.21037/jgo-22-434/coif). ANR reports grant funding from National Human Genome Research Institute (No. T32 HG008958) and National Cancer Institute (No. CA233444-03S1), as well as support from the Collaborative Alliance of Pancreas Education and Research. TJG reports consulting fees from Pfizer and data safety monitoring board member for ACI-Agenus. SCR reports a Career Development Grant from Bristol Myers Squibb Foundation/National Medical Fellowships. SJH reports grant funding from the National Institute of Diabetes and Digestive and Kidney Diseases (No. 1UO1DK108320-06). JCF reports grants/contracts from Ipsen, Novartis and Natera as well as receipt of equipment, materials, drugs, medical writing, gifts or other services from Ipsen. The other authors have no conflicts of interest to declare.

Ethical Statement: The authors are accountable for all aspects of the work in ensuring that questions related to the accuracy or integrity of any part of the work are appropriately investigated and resolved. The study was conducted in accordance with the Declaration of Helsinki (as revised in 2013). This study was exempt from institutional review board approval and individual consent for this retrospective analysis was waived.