Gastric cancer (GC) is the fifth most common cancer and the third most common cause of cancer-related death worldwide (1,2). In particular, GC patients with peritoneal metastasis (PM) are known to have a very short survival period.

We have demonstrated the efficacy of paclitaxel (PTX) in i.p. chemotherapy for PM (6). Following this result, we designed a new regimen combining i.p. PTX and S-1 and intravenous (i.v.) PTX for GC patients with PM and demonstrated its feasibility in a preliminary study (7). However, no patients underwent surgery in our preliminary study, and the most common progression onset region was the primary tumor, not malignant ascites. These patients had obstructed stomachs owing to the increased size of the primary lesions (7). Based on these results, we considered that gastrectomy might improve the prognosis of the patients for whom our new regimen was effective. Therefore, in our next phase II trial, gastrectomy called conversion surgery (CS) (8), was performed in patients who responded to chemotherapy. The result showed a promising MST of 21.3 months for GC patients with PM (9).

Prospective randomized controlled trials are needed to verify the efficacy of CS in patients who respond to chemotherapy. However, undertaking such a randomized study to evaluate the efficacy of CS might be difficult in this patient population, and so we conducted a retrospective study making use of updated our preliminary and phase II trial data (7,9). We present the following article in accordance with the STROBE reporting checklist (13) (available at https://jgo.amegroups.com/article/view/10.21037/jgo-21-431/rc).

This retrospective study included 50 GC patients with PM who underwent i.p. and systemic chemotherapy at Kindai University Hospital between May 2003 and October 2008. Patients were followed up in the outpatient or inpatient department or through telephone calls every 3 months for the first 2 years, every 6 months for 3–5 years, and annually thereafter by May 2020. In this study, the median follow-up time was 22.27 (4.40–160.2) months.

Inclusion criteria were diagnosis with histologically proven adenocarcinoma of the stomach; the presence of PM confirmed by staging laparoscopy; absence of non-curative factors except for PM. Eastern Cooperative Oncology Group (ECOG) performance status of 0 or 1. The TNM categories were based on the Japanese Classification of Gastric Carcinoma (3rd English edition) (14).

This study was approved by the institutional review board of Kindai University Hospital (No. 31-085) and was conducted according to the principles of the Declaration of Helsinki (as revised in 2013). Informed consent or an alternative was obtained from all patients.

Disease assessment and indication for CS

In the CSI group, second-look laparoscopy was performed if the response to chemotherapy was complete response, partial response or improvement in wall thickness of 30% or more. CS was performed if the results confirmed negative PM and negative peritoneal cytology findings and curative resection was deemed possible. Intraoperative and postoperative complications were reported according to the Clavien-Dindo classification (17). Complications were defined and recorded according to the National Cancer Institute Common Toxicity Criteria version 4.0 (18).

Post-operative adjuvant chemotherapy using with one course of weekly i.v. PTX (19) and S-1 monotherapy (20) was administered for at least 1 week after CS. Treatment after recurrence was at the discretion of the attending physician.

Differences between the two groups were analyzed by using Fisher’s exact, chi-square or Mann-Whitney U tests. The overall survival (OS) rates were estimated by the Kaplan-Meier method and compared the survival curves with the log-rank test. Prognostic factors were determined using by univariate and multivariable analyses (Cox proportional-hazards regression modeling).

Clinical outcomes of 50 GC patients with PM (32 men and 18 women) treated with chemotherapy (7,9) were analyzed and updated. Patients were classified into either CTx (n=15) (7) or CSI (n=35) groups (9). There were no significant differences in age, sex, ECOG performance status, histological subtype or chemo cycle between the two groups (Table 1). Regarding tumor response, in the CTx group, three patients with a measurable target lesion showed a partial response, and six patients without a measurable target lesion demonstrated a 30% decrease in wall thickness. Thus, in the assessment of antitumor efficacy, 9 of 15 patients (60%) were diagnosed as responders.

Conversely, in the CSI group, there was one complete response and seven partial responses. And a further 15 patients showed a 30% decrease in wall thickness. Thus, 23 of 35 patients (65.7%) were diagnosed as responders (Table 1). Therefore, second-look laparoscopy was performed in the 23 patients in the CSI group. Unfortunately, however, one patient was found to have residual PM. Therefore, CS was performed in 22 patients with resolved PM (Figure 1). 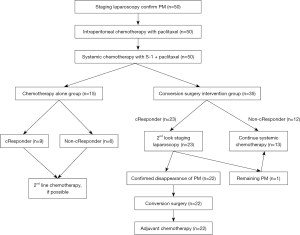 CS was performed 4–6 weeks (median, 5 weeks) after the last administration of S-1. All CS were performed by laparotomy. Curative total gastrectomy was performed in 19 patients, while curative distal gastrectomy and pancreaticoduodenectomy were performed in two and one patient, respectively. Four patients underwent splenectomy and one underwent transverse colon resection. Postoperative complications were observed in only two patients (9%), one with anastomotic leakage and one with pancreatic fistula. Both of these patients recovered with conservative treatment. Further details of surgical findings are presented in Table 2. The pathological effects of chemotherapy were grade 0 in 3 (13.6%) patients, grade 1a in 12 (54.5%), grade 1b in 2 (9.0%), grade 2 in 4 (18.2%), and grade 3 in 1 (4.5%) patients (Table 2).

Surgical and pathological findings in patients who underwent CS

Adjuvant chemotherapy was initiated in all 22 CS patients. And there were no treatment-related deaths during the treatment period. 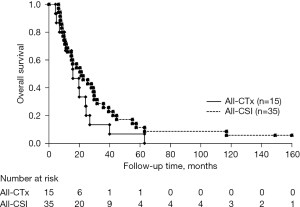 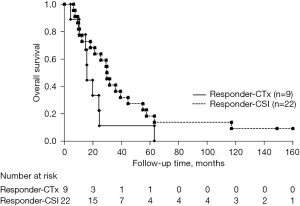 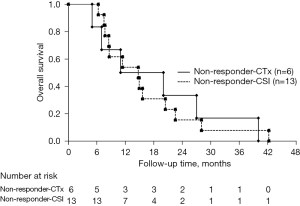 The survival rates did not differ significantly between grade 1b over response group (n=7) and grade 0 or grade 1a response group (n=15) among those who have undergone CS in the CSI group, (log-rank test, P=0.653) (Figure 5). 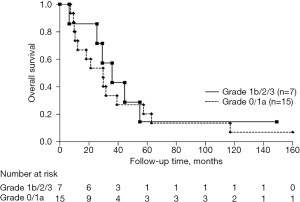 Prognostic analysis in the responder group

Recently, CS for GC patients has attracted considerable attention as a novel treatment strategy (12). However, evidence on whether CS provides a considerable survival benefit for GC patients with PM is lacking. Therefore, in the present study, we attempted to clarify the significance of CS for GC patients with only PM. The OS rate of chemotherapy-responsive patients in the CSI group was not significantly different to responders in the CTx group (P=0.059; 95% CI, 0.1473–1.039). However, in the multivariable analysis indicated lymph node metastasis and CS as independent prognostic factors. Furthermore, only in the CSI group, four patients were alive for more than 5 years. Additionally, two patients were alive for more than 12 years after CS. We thus concluded that the advantage of CS was evident in some patients in the chemotherapy-responder group.

In contrast, only one patient in the CTx group survived for more than 5 years. Based on this case, we might need a better way to distinguish the chemotherapeutic response. Therefore, the development of chemosensitivity and biological maker is awaited in clinical practice.

In this study, most of the resected primary gastric tumors were classified as histological grade 1a. This suggests that the chemotherapy performed at our institution had little effect on the primary tumor. Kurokawa et al. reported that histological response seemed to be a better surrogate endpoint of OS (24). While, our subclass analysis indicates the histological response did not affect the OS of CS patients, four patients who have survived for more than 5 years were ypN0 cases and one patient obtained pathological CR in the primary tumor.

Furthermore, in unresectable metastatic GC, some reports indicate that R0 provides long-term survival and that microscopic residual tumor (R1) and macroscopic residual tumor (R2) are strong prognostic factors for surgery (25,26). Therefore, CS should be performed for R0 resection to achieve long-term survival if the disappearance of PM is observed.

There were no surgical-related deaths in the present study. Our operative time, blood loss and operative morbidity were acceptable compared with previous studies (27,28). These results indicated that CS after our combination chemotherapy was safe and well tolerated.

The low number of surgical complications allowed the resumption of adjuvant chemotherapy early in the postoperative period. This may have contributed to the better prognosis of patients who underwent CS (29).

There are still some limitations to our study. First, this was a retrospective single-arm study. Second, the number of cases is relatively small. Third, the 2nd line chemotherapy regimens for chemotherapy non-responders were different and novel modalities (such as trastuzumab) were not used in this study period. These limitations might have affected the tumor-response to chemotherapy, negative conversion rate of PM and eventually the OS of the patients. Therefore, our conclusions need to be verified by more clinical trials.

We thank Gillian Campbell, PhD, from Edanz Group (https://www.edanzediting.com/ac) for editing a draft of this manuscript.

Reporting Checklist: The authors have completed the STOBE reporting checklist. Available at https://jgo.amegroups.com/article/view/10.21037/jgo-21-431/rc

Conflicts of Interest: Both authors have completed the ICMJE uniform disclosure form (available at https://jgo.amegroups.com/article/view/10.21037/jgo-21-431/coif). The series was sponsored by the Peritoneal Surface Oncology Group International (PSOGI). The authors have no other conflicts of interest to declare.

Ethical Statement: The authors are accountable for all aspects of the work in ensuring the questions related to the accuracy or integrity of any part of the work are appropriately investigated and resolved. This study was approved by the institutional review board of Kindai University Hospital (No. 31-085) and was conducted according to the principles of the Declaration of Helsinki (as revised in 2013). Informed consent or an alternative was obtained from all patients.