In 1990, Burke et al. first reported on Epstein-Barr virus (EBV)-associated gastric carcinoma (EBVaGC), as determined by polymerase chain reaction (1). EBV, a gamma herpesvirus consisting of 170 kilobase pairs of double-stranded DNA, is considered a cause of infectious mononucleosis, nasopharyngeal cancer, and Burkitt lymphoma. It believed that cancer may arise from latent EBV infection. Since 2000, EBV has been reported to be associated with various malignancies, including cancers of the skin, lung, and ureter (2,3). Gastric carcinoma with lymphoid stroma (GCLS) was first reported by MacCarty et al. in 1921 and further characterized by Watanabe et al. in 1976, at which time GCLS composed approximately 4% of gastric cancers (4,5). More recent data indicate that 80% to 90% of GCLS tumors are associated with EBV infection (6,7).

We diagnosed multiple gastric cancers that occurred in the same patient at different times over 15 years. GCLS was identified in resected specimens obtained from the third and total resection of the patient’s remnant stomach. Immunohistochemistry assays using EBV-encoded RNA in situ hybridization (EBER-ISH) performed initially on the total resection specimen and retrospectively on resected specimens from the 2 prior surgeries confirmed the diagnosis of EBVaGC in all gastric lesions from this patient. Additionally, we evaluated the combined positive score (CPS), which represents the ratio of the number of programmed death ligand 1 (PD-L1)-positive cells to the total number of all tumor cells (8).

Because comparable cases with clinical courses as long as this patient experienced are rare, we present this unique case and a literature review. Histopathological diagnoses in this case were based on definitions provided in the 15th edition of the Japanese Classification of Gastric Carcinoma from the Japan Gastric Cancer Association (9). We present the following case in accordance with the CARE reporting checklist (available at https://jgo.amegroups.com/article/view/10.21037/jgo-22-469/rc).

At initial presentation, the patient was a 67-year-old male with no subjective symptoms. His family history included a father who had died from esophageal cancer and a mother who died due to breast cancer. The patient’s medical history included undergoing laparoscopy-assisted distal gastrectomy with Billroth I reconstruction in 2004 to treat stage 0-IIc gastric cancer on the anterior wall of the corpus, as detected by upper gastrointestinal (GI) endoscopy. Histopathology results indicated a moderately differentiated adenocarcinoma, pT1b, N0, no lymphatic and venous invasion, stage IA, and severe chronic gastritis and Helicobacter pylori infection amidst a background of intestinal metaplasia.

In 2009, endoscopic submucosal dissection (ESD) was performed on reoccurring stage 0-IIc gastric cancer in the posterior wall of the greater curvature. Histopathologic findings revealed a well-differentiated adenocarcinoma, pT1b, no lymphatic and venous invasion, and a negative resection margin. Although total resection of the remnant stomach was recommended, the patient declined the procedure and opted to receive only follow-up evaluation.

Approximately 15 years later, in 2018, upper GI endoscopy revealed a hemorrhagic type 0-I lesion on the remnant gastric fundus (Figure 1). Biopsy detected a poorly differentiated adenocarcinoma with a depth of invasion described as cT1b. Upper GI fluoroscopy of the gastric fundus confirmed these findings (Figure 2). A carcinoembryonic antigen test showed a mildly increased value of 6.0 ng/mL. Contrast-enhanced computed tomography and ultrasound examination of the abdomen did not reveal metastasis or relapse. Based on the diagnosis, total resection of the remnant stomach and Roux-en-Y anastomosis was performed in September 2018. A tumor sized 15 mm × 15 mm was observed. The histopathological diagnosis of the remnant gastric cancer was poorly differentiated adenocarcinoma, type 0-I, pT1b, N0 with lymphatic invasion, no venous invasion, stage IA (Figure 3A,3B). Immunohistochemistry examination using EBER-ISH demonstrated diffuse positive reactions in nearly all tumor cells, resulting in diagnosis of EBVaGC with GCLS (Figure 3C). Moreover, immunohistochemistry using anti-PD-L1 antibody indicated a CPS of 60 (Figure 3D). 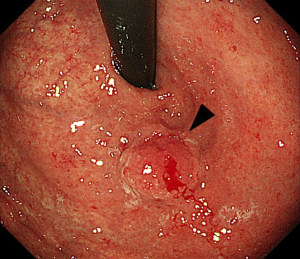 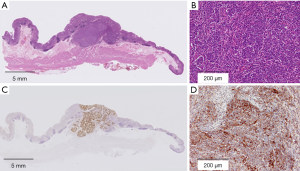 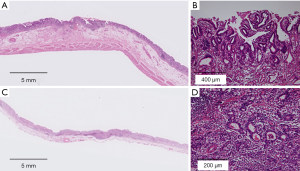 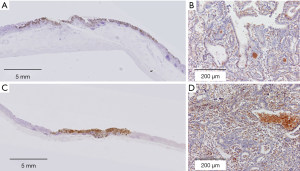 Immunohistochemistry using anti-PD-L1 antibody initially showed a CPS of 10 to 20 (Figure 5C). On a second hematoxylin and eosin staining, the CPS for some areas of lymphocyte infiltration increased to 40 (Figure 5D). These findings demonstrate that lymphocyte infiltration increased and detection of PD-L1 became stronger as the patient experienced metachronous multiple onsets of gastric cancer.

At 3 years since the most recent surgery, no indications of metastasis or relapse have been observed during periodic follow-up evaluation of the patient at an outpatient clinic.

All procedures performed in this case were in accordance with the national research committee(s) and with the Helsinki Declaration (as revised in 2013). Written informed consent was obtained from the patient for publication of this case report and accompanying images. A copy of the written consent is available for review by the editorial office of this journal.

This report describes a patient with metachronous, multiple gastric cancer that required 3 treatments over 15 years. Histopathology results on a specimen obtained from the third and total gastrectomy indicated a finding of GCLS; immunohistochemistry using EBER-ISH and anti-PD-L1 antibody resulted in diagnosis of EBVaGC, which was considered to have responded to immune checkpoint inhibitor therapy. The same immunostaining was performed retrospectively on 2 resected specimens obtained from the prior surgeries, yielding similar positive results for EBV infection and PD-L1 staining. Additionally, the CPS was calculated for these prior specimens to determine the effectiveness of the immune checkpoint inhibitor. We conducted a literature search for reports of similar cases but found none. Therefore, we report this case here together with a literature review.

Generally, EBV is rapidly eliminated by cytotoxic CD8 T cells. While the mechanism by which EBV induces carcinogenesis is not fully known, interactions between EBV and several gene products are thought to be involved in this process. First, the p53 gene destabilizes the nuclear antigen protein EBNA1, resulting in suppression of p53-mediated apoptosis. Second, EBER is considered to serve as a growth factor in EBV-infected cells through autocrine action stimulated by the expression of insulin-like growth factor in gastric cancer cells (10,11). Furthermore, recent studies of chronic active EBV infection haver reported that the virus is no longer transmissible from these cases due to the deletion of infection-related genes that activate the virus abnormally and become neoplastic in infected cells (12).

EBVaGC accounts for approximately 10% of cases of gastric cancers. In these cases, chronic gastric inflammation with intestinal metaplasia and H. pylori infection often are present simultaneously and/or at various times (13,14). In cases of metachronous gastric cancer, the interval from initial treatment and/or surgery to diagnosis of reoccurring gastric cancer differs widely, ranging from 3.5±2.4 years in patients with EBV infection to 6.9±4.7 years among EBV-negative patients (15). Gastric cancer occurs most commonly in the upper stomach or corpus and less commonly in the antrum. The disease typically manifests as type 0-llc dent lesions. Submucosal tumor-like formation with unclear margins is frequently seen (16,17). Histopathologically, moderately differentiated or poorly differentiated adenocarcinoma is often observed. Irregular, small, tube-like, proliferative structures (also called a “lace pattern”) often appear in lesions restricted to the mucosa (18). Compared with common gastric cancer, the incidence of vessel invasion or lymphogenous metastasis is lower and the prognosis is more favorable in metachronous gastric cancer (6).

In GCLS, which constitutes 1.1% to 4.0% of all gastric cancers, the prevalence of EBV infection is 80% to 90% (13,19). Among males with GCLS, the mean age is 50 to 60 years (7). Once submucosal infiltration occurs, marked immune reactions are triggered and infiltration of lymphocytes is seen. At that stage, lymphoid follicles with germinal centers develop; cancer cells grow in the form of vesicles with unclear acinar, solid, or glandular cavity formation; and manifestation of GCLS becomes prominent and clarified (5).

In the case reported here, upper GI endoscopy showed only redness consistent with chronic inflammation of the surrounding mucosa without findings indicative of an apparent lesion. A year later, however, a type 0-I elevated lesion was identified. Accordingly, we concluded that tumor cells infiltrated the submucosal layer, triggered an immune reaction, and resulted in the lesions becoming prominent. The type 0-IIc lesions in the past 2 cases were found above the lesser curvature of the anterior wall and in the posterior wall of the greater curvature of the gastric corpus. Thus, although these tumor types and locations were typical of gastric cancer, their histological types were atypical in their characterizations as moderately differentiated and well-differentiated adenocarcinomas. Both tumors had negative margins, and their depth of invasion was pT1b. The infiltration of cancer cells into the submucosal layer was in a narrow range of only 1 to 2 ducts at the first occurrence, and the lesion in the remnant stomach showed relatively mild infiltration of approximately 500 µm. Hence, GCLS had not yet became prominent.

Given the presence of latent EBV infection and the associated possibility of EBVaGC, we proposed that a treatment plan such as total gastrectomy should be considered. Moreover, if tumor localization or metachronous multiple gastric cancer is observed, despite an uncharacteristic lymphoid stroma or histological type, immunohistochemistry using EBER-ISH should be performed and latent EBV infection should be considered.

Recently, it has been reported that treatment with an immune checkpoint inhibitor, anti-programmed death 1 antibody, is effective in patients with high expression of PD-L1 and programmed death ligand 2 (PD-L2) and with lymphocyte infiltration into the tumor stroma (20). In the case reported here, PD-L1 was positive on the tumor cell membrane at the time of the first treatment, and both CPS and lymphocyte infiltration had increased by the second and third treatments. We conducted PDL-1 immunohistochemical staining to verify recent reports and to investigate the possible usefulness of exploring anti-PD-1 antibody therapy in patients with metastases or relapse. Accordingly, we determined that assessing the patient for EBVaGC would be useful for selecting an appropriate treatment such as gastric cancer chemotherapy (including an immune checkpoint inhibitor), noncurative resection of ESD, or treatment at the time of metastasis or recurrence.

This patient, who received follow-up evaluation for an unusually long period of 15 years, represents a rare case of EBVaGC. We have reported the case, along with a literature review, to further clinical understanding of the manifestation and diagnosis of metachronous, multiple, early EBVaGC. It aims to increase awareness among clinicians and pathologists of the necessity of considering EBVaGC when deciding on the treatment strategy after reoccurrence of gastric cancer.

Reporting Checklist: The authors have completed the CARE reporting checklist. Available at https://jgo.amegroups.com/article/view/10.21037/jgo-22-469/rc

Conflicts of Interest: All authors have completed the ICMJE uniform disclosure form (available at https://jgo.amegroups.com/article/view/10.21037/jgo-22-469/coif). The authors have no conflicts of interest to declare.

Ethical Statement: The authors are accountable for all aspects of the work in ensuring that questions related to the accuracy or integrity of any part of the work are appropriately investigated and resolved. All procedures performed in the case were in accordance with the national research committee(s) and with the Helsinki Declaration (as revised in 2013). Written informed consent was obtained from the patient for publication of this case report and accompanying images. A copy of the written consent is available for review by the editorial office of this journal.