Colorectal cancer (CRC) is the third most prevalent cancer in the world (1). More than 1.8 million new cases of CRCs still occur each year (2). Colorectal adenoma (CRA) is a recognized precursor lesion for CRC (3). Therefore, early detection and resection of CRA are essential to reduce the incidence rate of CRC effectively. Endoscopic removal of CRAs is the key to reducing CRC incidence and mortality (4,5). However, although endoscopic treatment has the advantages of simple operations, less trauma and complete resection, there is still a high recurrence rate (6). Therefore, the analysis of risk factors for recurrence after endoscopic removal of CRAs is important clinical guidance for the prevention of recurrence and reduction of canceration rate.

A number of factors associated with CRA recurrence have been identified, including age, sex, lifestyle and adenoma characteristics (7-9). It has been shown that inflammation plays a significant role in the occurrence and development of tumors (10). Peripheral blood count coefficient is a relatively new index of inflammation, including platelet-to-lymphocyte ratio (PLR) and neutrophil-to-lymphocyte ratio (NLR). These indexes can better reflect the systemic inflammatory response, with readily available and low-cost, and have been reported to correlate with the prognosis of CRC (11,12). Fibrinogen has a certain correlation with malignant tumors, which plays a significant role in evaluating the prognosis of tumors (13). Lymphocytes are important antineoplastic factors, which play a significant role in cancer-specific immune response (14). Recently, a novel prognosticator fibrinogen-to-lymphocyte ratio (FLR) has been proposed, which has been proved to evaluate the prognosis in gastric cancer (15), esophageal cancer (16), non-small cell lung cancer (17) and head and neck adenoid-cystic carcinoma (18). However, there is no study on the predictive performance of NLR and FLR in CRA recurrence. The purpose of this research was to explore the predictive performance of NLR and FLR on the CRA recurrence and to develop a new nomogram for a more accurate assessment of recurrence to provide basis for follow-up of patients with CRA. We present the following article in accordance with the TRIPOD reporting checklist (available at https://jgo.amegroups.com/article/view/10.21037/jgo-22-410/rc).

This research included patients who underwent colonoscopy and CRA resection for the first time in the General Hospital of Tianjin Medical University from October 2017 to October 2019. They were followed up for 2 years to evaluate their recurrence of adenomas by colonoscopy. The inclusion criteria were pathological diagnosis of CRA, at least one follow-up colonoscopy performed at more than 6 months later after CRA resection, with enough data. Patients with one of the following characteristics were excluded: (I) history of CRC or CRA; (II) history of colorectal surgery or colonoscopy with removal of adenomas; (III) history of familial adenomatous polyposis, inflammatory bowel disease or intestinal tuberculosis; (IV) poor bowel preparation resulting in unclear colonoscopic views; (V) incomplete data; (VI) acute infections, blood disorders, autoimmune diseases and other diseases that may cause inflammation. A total of 421 patients were included in the study. The study was conducted in accordance with the Declaration of Helsinki (as revised in 2013). The study was approved by the Ethical Committee of Tianjin Medical University General Hospital (No. IRB2022-WZ-014) and individual consent for this retrospective analysis was waived.

Statistical analysis of data was performed using IBM SPSS Statistics 23.0 and R version 4.0.4. A t-test for independent samples was carried out on continuous variables with a normal distribution, which were expressed as mean ± standard deviation (SD). Continuous variables with non-normal distribution were expressed by median (interquartile range) and analyzed by Mann-Whitney U tets. Categorical variables were expressed as count and percent and were analyzed by χ2 test. The Youden index was used to determine the cut-off points of the continuous variable. In the training cohort, an analysis of multivariate logistic regression was conducted to determine the independent risk factors for recurrence of CRA. Using R software “rms” package and independent risk factors, a nomogram model for predicting the risk of CRA recurrence was established. A calibration plot with bootstrap sampling (n=1,000) was used to calibrate the nomogram internally. By calculating the area under the curve (AUC) of the receiver operating characteristics (ROC) curve and decision curve analysis (DCA), we assessed the discriminative power and clinical utility of the nomogram model. All tests were two-sided, and a P value of <0.05 was considered to be statistically significant.

Clinical characteristics of patients with CRA

The study ultimately included 421 patients with CRA who were divided into a training cohort (n=301) and a validation cohort (n=120) by random sampling. A significant difference in clinicopathological features between two cohorts was not found (all P>0.05), which meant baseline for the two cohorts was balanced. The percentage of recurrence in the two cohorts were 53.2% (n=160) and 51.7% (n=62). The clinicopathological features of CRA patients in two cohort were shown in Table 1. 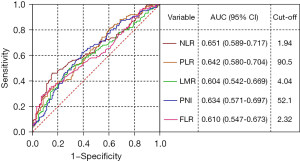 Six independent risk factors associated with risk of recurrence after colonoscopy resection of CRA were identified based on multivariate regression analysis. These six factors were used to create a predictive model for recurrence in CRA patients (Figure 2). The total points of patients were calculated by adding up all individual scores of the six predictors. Different total points corresponded to different risks of recurrence. The nomogram score was 39 for smoking, 61 for diabetes, 100 for adenoma number, 56 for adenoma size, 60 for NLR and 55 for FLR, respectively. The AUCs of the nomogram for predicting the risk of CRA recurrence in two cohorts were 0.846 (95% CI: 0.803–0.890) and 0.841 (95% CI: 0.770–0.913) (Figure 3A,3B). 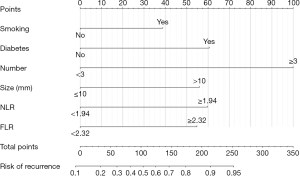 The calibration curves showed that the probability predicted by the model is basically consistent with the actual probability, and had good accuracy (Figure 4A,4B). DCA was a new method to evaluate alternative prognostic strategies with significant advantages over AUC (Figure 5A,5B). The results demonstrated that the line graph model showed a good clinical application value over a wide range of the risks of recurrence of the two cohorts, which indicating that it had a good clinical utility.

Studies have shown that more than 95% of CRC develops from adenomatous polyps (21). In recent years, endoscopic resection has become increasingly popular as a method of removing CRAs, thereby reducing CRC incidence and mortality (22). There is a significant clinical issue with the high recurrence rate after resection. Clinical studies showed that 20–50% of CRA patients recurred within 2–5 years after resection (23), or even higher (24), and about 0.3–0.9% of patients could develop CRC (25). Therefore, identifying high-risk factors for recurrence after CRAs removed by colonoscopy can provide a theoretical basis for regular review of colorectal microscopy in patients.

Among 421 patients, CRA recurrence were observed in 222 patients (52.7%). The recurrence rate was high, likely related to the fact that high average age of the population included in the study. Many studies have shown that the pathologic features of adenoma are highly correlated with its recurrence, which are the most commonly used predictors of recurrence (26-28). Our study showed that the size and number of adenomas were significant independent risk factors for recurrence, which was consistent with previous research (29,30). Smoking is a well-known carcinogenic risk factor, which has been proved to be related to the occurrence and progression of CRC (31). Our study found a significant correlation between smoking and CRA recurrence, considering that smoking can promote adenoma development through oxidative DNA damage (32). A foreign study showed a significant increase in the incidence of CRA in people with poor glycemic control (33). The association of hyperglycemia with CRA has been demonstrated in studies (34), which is thought to be related to insulin resistance. Insulin resistance and subsequent hyperinsulinemia lead to increased insulin-like growth factor 1 (IGF1) signaling, both of which are risk factors for CRA (35). Our study also found that the diabetes was an independent risk factor for recurrence (36). Previous researches have found that the family history of CRA or CRC may be a risk factor for adenoma recurrence (19,27,37), which may be associated with autosomal dominant inheritance. However, some studies have found the opposite results (38,39). Our study showed that family history of CRC was not significantly associated with recurrence of CRA, and the sample size needs to be expanded for further studies.

Inflammatory reaction is involved in tumor progression through a series of inflammatory cells, such as neutrophils, lymphocytes, platelets and monocytes (40). Neutrophils are known to regulate the tumor microenvironment and produce cytokines that may promote angiogenesis as well as tumor cell proliferation and migration (41). Lymphocytes play a vital role in antitumor immunity by promoting the apoptosis of tumor cells, thus inhibiting the progression of tumor cells (42). Studies have shown that high NLR is associated with an increase in colorectal adenomatous polyps, which is considered to be related to the continuous inflammatory state in the body (43). Chronic inflammation damages normal colorectal epithelial cells by releasing multiple inflammatory mediators that damage endothelial cells and enhance vascular permeability (44). As a marker of systemic inflammatory response, NLR is of great significance in predicting the prognosis of various cancers (45,46). In patients with progressive CRC, the increase of NLR was associated with a high risk of progression, and the normalization of NLR after chemotherapy improved the progression-free survival of some patients (47). Studies have shown that non-steroidal anti-inflammatory drugs (NSAIDs) can reduce systemic inflammation and the risk of CRC (48). In this study, high NLR was found to be a risk factor for adenoma recurrence, which accorded closely with the above theory.

As well as providing a stable framework for the extracellular matrix of tumors, fibrinogen facilitates tumor angiogenesis, and enhances tumor migration and invasion (49,50). Fibrinogen can facilitate tumor cells evading natural killer cells (51). Many types of cancer have poor prognosis when their fibrinogen levels are high, as shown by recent studies (52-54). Elevated fibrinogen levels are related to an increased risk of CRC (55,56). The increase level of plasma fibrinogen in CRC patients before operation is related to distant metastasis and poor outcomes after radical operation (57). The FLR represents a combination of fibrinogen and lymphocyte that synergistically enhances its individual prognostic value. Moreover, it may reflect the interaction between inflammation and clotting in cancer (16). FLR has been shown to assess tumor prognosis in carcinoma of stomach (15), esophagus cancer (16), non-small cell lung cancer (17) and head and neck adenoid-cystic carcinoma (18). In particular, higher FLR values were associated with poorer outcomes. However, no study has evaluated the relationship between FLR and risk of CRA or CRC. This study suggested that FLR was served as an independent risk factor for adenoma recurrence and had a potential prognostic value.

As mentioned earlier, six independent risk factors contributed to the development of the risk prediction model. The nomogram could shift the complex regression equation to simple and visual graphs, which made the results of the prediction model easier to read. Calibration curve and ROC curve verified that the nomogram had good predictive ability. DCA also confirmed the clinical practicability of this nomogram model.

Funding: This work was supported by funding from Tianjin Science and Technology Bureau Major Disease Prevention and Control Technology Major Special Project (No. 19ZXDBSY00020), the National Natural Science Foundation of China (No. 81900487) and the National Key R&D Program of China (No. 2019YFC0119505).

Reporting Checklist: The authors have completed the TRIPOD reporting checklist. Available at https://jgo.amegroups.com/article/view/10.21037/jgo-22-410/rc

Conflicts of Interest: All authors have completed the ICMJE uniform disclosure form (available at https://jgo.amegroups.com/article/view/10.21037/jgo-22-410/coif). The authors have no conflicts of interest to declare.

Ethical Statement: The authors are accountable for all aspects of the work in ensuring that questions related to the accuracy or integrity of any part of the work are appropriately investigated and resolved. The study was conducted in accordance with the Declaration of Helsinki (as revised in 2013). The study was approved by the Ethical Committee of Tianjin Medical University General Hospital (No. IRB2022-WZ-014) and individual consent for this retrospective analysis was waived.