We conducted a retrospective analysis of patients with metastatic anal SCCa using the National Cancer Database (NCDB). The NCDB is hospital-based cancer registry that collects and reports prospective data on over 70% of cancer incidents diagnosed at more than 1500 Commission on Cancer (CoC)-accredited centers in the United States. The NCDB was established in 1989 as a nationwide, facility-based, comprehensive clinical surveillance resource oncology data in the US. The staging system used was in accordance with the AJCC Staging Manual 6th edition for data between 2004 and 2009, and the 7th edition from 2010 and 2015. Since NCDB contains fully de-identified data, this study was conducted under waiver of consent guidelines of Emory University institutional review board (IRB). The study was conducted in accordance with the Declaration of Helsinki (as revised in 2013).

Patient demographic, disease, and treatment characteristics were compared between patient who received local therapy and those who did not. ANOVA tests and Chi-square tests were used for numeric and categorical variables. Univariate (UVA) and multivariate analyses (MVA) with Cox proportional hazards models were used to assess the associations between tumor/patient characteristics and overall survival (OS). Kaplan-Meier analysis with log-rank tests were generated to depict and compare OS between interested patient characteristic categories.

Between 2004 and 2015, a total of 1,160 patients with primary diagnosis of metastatic SCCa were identified from the database, included and analyzed in this study. Patients who have recurrent metastatic disease were not included in this study. Patient and treatment characteristics are summarized in Table 1. Median age at diagnosis was 57 years. Majority of the patients were female (65%), younger than 60 years (59%) and had Charlson-Deyo Score of 0 (83.6%). Non-Hispanic Whites were 79% of the patients, followed by non-Hispanic Blacks at approximately 12%. Nine hundred forty-eight (82%) patients received local therapy: 827 (71%) received radiation only, 95 (8%) patients underwent local resection, and 26 (2%) patients underwent abdominoperineal (radical) resection (APR). Most patients received local therapy concurrently with chemotherapy (35%), while others were before (18%) or after chemotherapy (23%). Only 212 (18%) patients did not receive any local therapy. Almost all the patients, including those who did (96%) or did not (98%) receive local therapy, had a documented clinical cM1 disease at diagnosis and received systemic therapy for their metastatic disease. The most common metastatic sites were liver (25.9%), lung (11.6%) and bone (8.5%). Only a minority of patients (5%) had multiple metastatic disease sites at diagnosis.

*, The parametric P value is calculated by ANOVA for numerical covariates and chi-square test for categorical covariates. Col %, percentages by column; NOS, not otherwise specified; ANOVA, analysis of variance. 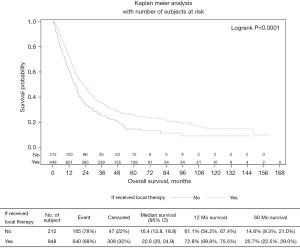 Figure 1 Local therapy vs. no local therapy/systemic chemotherapy only. 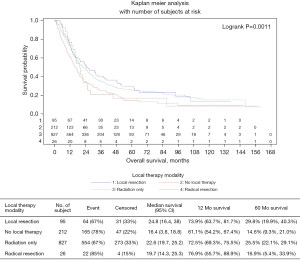 Figure 2 Modality of local therapy vs. systemic chemotherapy only.

*, The parametric P value is calculated by ANOVA for numerical covariates and chi-square test for categorical covariates. Col %, percentages by column; NOS, not otherwise specified; ANOVA, analysis of variance.

Number of observations in the original data set =1,160. Number of observations used =1,160. Backward selection with an alpha level of removal of .20 was used. The following variables were removed from the model: Histology, Median Income Quartiles 2000, TUMOR_SIZE_AllYear, Urban/Rural 2003, Race, and Surgical Margins. 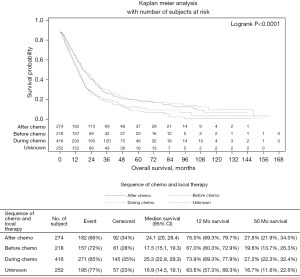 Local therapy before, during or after chemotherapy 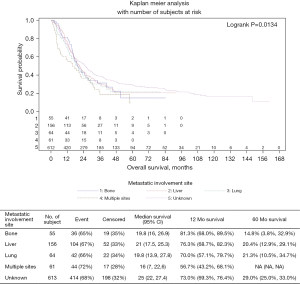 The role of immunotherapy is emerging: NCT04444921 is a randomized phase 3 trial comparing chemotherapy alone (carboplatin + paclitaxel) to chemotherapy plus nivolumab for treatment-naïve metastatic anal cancer (15). A recent randomized phase II study CARACAS addressed the safety and efficacy of dual EGFR and PD-L1 blockade in who had progressed after at least one line of treatment (16). Sixty patients were randomized to avelumab alone or in combination with cetuximab: The primary endpoint ORR was 17% in the combination arm vs. 10% in the avelumab alone arm. With a median follow-up of 11 months, the PFS was 3.88 vs. 2.05 months, respectively. A favorable safety profile was observed in both arms.

This is the largest series of metastatic anal SCCa patients and the first to report potential benefits of local therapy on survival. This study specifically addressed the impact of local therapy on survival, the benefit of palliative RT compared to local or radical surgical resection, as well as the sequence of therapies. More than 79% of the patients received radiation to the primary site, and 10.4% underwent surgical resection for local control. Use of local therapy correlated closely with OS on MVA (HR 0.66; 0.55–0.79; P<0.001), with a 12-month and 5-year OS rates of 72.8% and 25.7% respectively, compared with 61.1% and 14.6% for patients treated with chemotherapy only. This supports the use of local control of the primary symptomatic/bulky tumor.

When comparing local therapy modality, local resection had the best 5-year OS survival outcome (29.8%) followed by palliative radiation (25.5%) and radical resection/APR (16.9%) as opposed to no local therapy (14.6%) (P=0.0011). Interestingly, patients who underwent radical surgical resection/APR derived a short-term benefit and had the best short-term outcome with 1-year OS 76.9%. However, these patients quickly lost the benefit thereafter (Figure 2) possibly due to long term complications of radical resections/APR surgery in addition to permanent colostomy complications, infections and fistulas. Moreover, there was no survival benefit on multivariate analysis for patients who underwent APR (mOS =19.7 months; HR 1.05; 0.48–2.29; P=0.909).

A previous study showed a survival benefit for a subset of patients (n=33) who underwent multidisciplinary management of their metastatic disease with potentially curative intent (19). The median PFS was significantly longer at 16 months (95% CI: 9.2–22.8; P<0.001) compared to those patients treated with only palliative systemic chemotherapy (5 months; 95% CI: 3.5–6.5; P<0.001). The difference in OS was also longer with a median OS of 53 months (95% CI: 28.3–77.6) compared to only palliative systemic chemotherapy (17 months; 95% CI: 13.9–20.1; P<0.001). Furthermore, the role of palliative surgical intervention or RT in patients with metastatic disease who previously received radiation treatment is unclear.

There are several limitations to our study, including the retrospective nature and possible treatment bias. Palliative radiation modality was more commonly used overall, but the database does not allow direct comparison between radiation therapy, local surgical intervention or radical resection/APR. The database does not include HIV status, and positive patients generally tend to have inferior outcomes (20). Unfortunately, the NCDB does not contain details regarding radiation or chemotherapy (e.g., dosage, length of treatment, etc.). Nonetheless, there are several strengths to our analysis. Our large number of patients bolsters outcomes evaluation compared to previously reported small case series. Most importantly, the statistically significant OS benefit for patients who underwent local resection of the primary should prompt a review of current treatment strategies for patients with metastatic anal SCCa.

Reporting Checklist: The authors have completed the STROBE reporting checklist. Available at https://jgo.amegroups.com/article/view/10.21037/jgo-22-125/rc

Ethical Statement: The authors are accountable for all aspects of the work in ensuring that questions related to the accuracy or integrity of any part of the work are appropriately investigated and resolved. Ethical approval was based on Emory University IRB waiver policy, since patient information in the database is completely de-identified and the database is legally accessible to the public. The study was conducted in accordance with the Declaration of Helsinki (as revised in 2013).