Survival comparison of stage IIA rectal cancer with or without neoadjuvant therapy: a SEER database analysis with propensity score matching

Colorectal cancer is one of the most common malignancies in the world, with the third-highest incidence and death rate among all malignancies (1,2). Rectal cancer accounts for approximately 30% of all colorectal cancer cases (1). The treatment has evolved with the introduction of neoadjuvant radiotherapy and chemotherapy before total mesorectal resection (TME) surgery (3). Currently, neoadjuvant chemoradiotherapy (CRT), TME, and adjuvant chemotherapy are the primary recommended treatments for patients with locally advanced rectal cancer (LARC) (4). Among them, neoadjuvant CRT has been widely accepted as a therapeutic method to reduce tumor stage, increase resectability, and reduce the local recurrence rate of patients with LARC (5). However, this success in improving survival comes at the cost of a significant reduction in quality of life (6). The National Comprehensive Cancer Network (NCCN) Guidelines recommend neoadjuvant and adjuvant therapy for patients at high risk of local recurrence, including stage II (T3–4, N0, tumor invasion of the myenteric layer or further) and stage III (N+, no distant metastases) (7). The European Society of Medical Oncology (ESMO) guidelines first recommended in 2013 that the treatment of rectal cancer should be stratified according to the risk of recurrence. For patients with low-risk rectal cancer, including early T3N0, and no significant invasion of the vasculature or rectal mesentery, surgical treatment can be considered directly (8). In addition, some studies have indicated that neoadjuvant CRT only reduces the risk of local recurrence but not distant metastasis (9), and fails to improve long-term survival and retention of the anal sphincter (10). Therefore, the need to complete neoadjuvant CRT for patients with different stages of LARC, such as stage IIA (T3N0M0), has generated some new controversies in different guidelines and literature.

Hence, our primary objective was to investigate the impact of neoadjuvant CRT on the prognosis of patients with stage IIA rectal cancer and to explore whether neoadjuvant CRT is necessary for these patients. Here, we performed an analysis comparing survival and clinicopathological differences between patients with stage IIA rectal cancer who underwent surgery alone and those who completed neoadjuvant CRT, applying a propensity score matching (PSM) method based on the information in the U.S. Surveillance, Epidemiology, and End Results (SEER) database. We present the following article in accordance with the STROBE reporting checklist (available at https://jgo.amegroups.com/article/view/10.21037/jgo-22-166/rc).

The SEER database comprises 18 cancer registries covering 27.8% of the U.S. population and collects and provides data on cancer clinicopathology, morbidity, and survival data. We extracted demographic and clinicopathological data of patients diagnosed with rectal cancer between January 2010 and December 2015 from the SEER database [database name: Incidence-SEER Research (Plus) Data, 18 Registries, Nov 2020 Sub (2000–2018)]. Patients who met the following criteria were included: (I) clear pathological diagnosis of rectal malignant tumors; (II) diagnosis time was from January 2010 to December 2015; (III) the American Joint Committee on Cancer (AJCC) stage was IIA; (IV) surgery has been completed definitely; (V) neoadjuvant therapy has been specified in the CRT database; and (VI) known time of survival and cause of death. Patients with the following criteria were excluded: (I) borderline tumors of the rectum; (II) local tumor resection only; (III) neoadjuvant therapy is not clear in the CRT database; (IV) colorectal cancer diagnosed by death certificate or autopsy; (V) other concurrent or multiple malignant tumors.

The study was conducted in accordance with the Declaration of Helsinki (as revised in 2013). Since the data of this project were all extracted from the SEER database and did not involve patient safety, privacy, and postoperative follow-up, no informed consent and no ethics committee approval were required.

Information on the following clinicopathological variables was extracted from the SEER database: sex, age, year of diagnosis, race, site of lesion, type of pathology, histological grade, TNM stage according to AJCC, number of lymph nodes harvested intraoperatively (LNH), whether radiotherapy or chemotherapy was administered and in sequence with surgery, carcinoembryonic antigen (CEA), tumor deposits (TD), perineural invasion (PNI), tumor size, follow-up time, tumor-specific deaths, and deaths from other causes. The primary outcomes were overall survival (OS) and cancer-specific survival (CSS). OS was defined as the time from diagnosis to death from any cause. CSS was defined as the time from diagnosis to cancer-specific death, with the data on death from other causes or survival at the end of follow-up being censored.

A logistic regression model was applied for PSM (3:1 matching), with a matching tolerance of 0.02 and without replacement. Survival curves were plotted using the Kaplan-Meier method, survival differences were assessed using the log-rank test, and multivariate analysis was performed using the Cox proportional risk model to generate adjusted hazard ratios (HRs) and 95% confidence intervals (CIs). Statistical significance was set at P<0.05 for a two-tailed test. All statistical analyses were performed using IBM SPSS Statistics 26.0 and R 4.1.0. All survival curves were plotted using GraphPad Prisms 8.2.1.

The univariate and multivariate Cox proportional risk regression were used to identify the preoperative independent risk factors for patients with stage IIA rectal cancer. And we performed a subgroup analysis for OS between the surgery group and the neoadjuvant CRT + surgery + chemotherapy group according to preoperative risk factors. 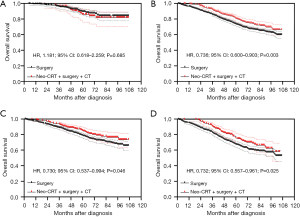 In the last two decades, multimodal treatment including neoadjuvant CRT has been widely used for LARCs (11). However, this treatment strategy has an important disadvantage, namely the high risk of intraoperative or postoperative complications. The adverse reactions of neoadjuvant CRT may lead to a ﬁnancial burden and a decline in quality of life, and delay follow-up treatment (12). Therefore, for some LARCs in earlier stages, such as stage IIA, whether neoadjuvant therapies should be completed is controversial in different studies and literature. Some studies have suggested that patients with T3N0 and T1-3N1-2 rectal cancer judged by imaging should receive neoadjuvant CRT (7). Benson et al. pointed out that in patients with cT3/T4 or lymph node-positive rectal cancer, preoperative therapy reduces local recurrence and improves tumor prognosis according to the NCCN guidelines (13). There is growing evidence that patients with LARC benefit more from neoadjuvant CRT than surgery alone or postoperative CRT in terms of local control rates and sphincter protection (14). However, some studies have indicated that T3N0 rectal cancer patients can control local recurrence at a relatively low level with surgery alone, suggesting that these patients may not need neoadjuvant CRT (15). Although neoadjuvant CRT significantly reduced the risk of local recurrence in LARCs, the benefit of local control did not translate into a survival benefit (9). Therefore, it remains controversial whether neoadjuvant CRT provides sufficient benefit to outweigh the side effects and inconvenience of treatment for patients with stage IIA rectal cancer (15).

However, do all patients with stage IIA rectal cancer need neoadjuvant and adjuvant treatment? What patients could be exempt from perioperative therapy? As we know, the severe toxicity associated with neoadjuvant CRT, including complications such as structural fractures of the lumbar spine, sexual and urinary dysfunction, proctitis, significant increases in defecation times, and incontinence (16), presents a significant obstacle and distress to the patient’s subsequent recovery and quality of survival.

The ESMO guidelines for the treatment of rectal cancer recommend a neoadjuvant treatment strategy based on multiple factors such as tumor location, circumferential resection margin (CRM), and clinical stage (17). This is specifically indicated for patients with low-risk rectal cancer who meet the following criteria: early T3N0, tumor invasion <5 mm, no significant invasion of the mesorectal fascia (MRF), no neurovascular invasion, and other factors; direct surgical treatment can be considered, and adjuvant treatment such as chemotherapy could be considered if postoperative pathology suggests including high-risk factors (8). Lin et al. also stated that the risk of colorectal cancer depends on the lymph node metastasis, positive CRM and distal resection margin (18). Skancke et al. noted that the short distal margin, lymph node metastasis, and positive CRM were significant predictors of local recurrence, distant metastasis, and OS (19). The prognosis of T3 patients with infiltration of more than 5 mm is significantly worse than that of patients with infiltration of less than 5 mm, and neoadjuvant CRT is usually required (7). Studies have shown that CRM is an important independent prognostic factor for local recurrence and long-term survival (20,21). Neoadjuvant radiotherapy should be considered if the distance between the tumor and rectal mesenteric fascia is predicted to be <1 mm on preoperative magnetic resonance imaging (MRI) (22). Studies have shown that in early, favorable cases (e.g., some early cT3N0), TME surgery alone is appropriate (15). For middle and lower stage II and III rectal cancer, preoperative radiotherapy or CRT can reduce the local recurrence rate without improving OS (23). Lavryk et al. showed that the distance between the tumor and anal verge was an independent prognostic parameter (24). Therefore, these factors could be considered when assessing the need for neoadjuvant therapy in stage IIA patients. Unconditional application of neoadjuvant CRT in low-risk patients was likely to result in overtreatment (18). Our study also performed a subgroup analysis to explore the effects of neoadjuvant and adjuvant therapy in different risk groups. The results showed that neoadjuvant CRT + surgery + chemotherapy did not significantly improve OS in the low-risk subgroup, but significantly improved OS in the high-risk subgroup regardless of the number of preoperative risk factors. Because we need to judge whether to use neoadjuvant treatment preoperatively, we chose risk factors among the preoperative independent factors, rather than postoperative ones.

The strength of this study is the large sample size available from the SEER database, which contains a wide range of information on neoadjuvant and adjuvant therapy for analysis and comparison, and increases the persuasiveness of this study. However, this study has some limitations. First, the SEER database only covers 27.8% of the US population, and many patients migrated in and out of SEER registry areas. So, there may be some bias in the inclusion and selection of data. Second, some key data that may affect the outcome of prognosis cannot be obtained from the SEER database, like underreported and incomplete data regarding adjuvant therapy and unrecorded variables, for example, (I) CRM. Although we did not have access to CRM data, its role as an independent postoperative risk factor did not provide guidance on whether to perform neoadjuvant therapy. (II) Depth of tumor invasion into the MRF. MRF, which obtained by pelvic MRI, may provide some guidance on neoadjuvant treatment for rectal cancer. (III) Where the tumor is located. Third, SEER database only includes the final pathologic stage, which may include patients who had a higher clinical stage, received neoadjuvant treatment, and then were downstaged at the time of resection. However, patients with higher stage usually have a poorer prognosis. If the results containing these patients were still significantly different, this would indicate the robustness of the results. Forth, patients with insufficient information were excluded, and it is unclear whether the results apply to them. Finally, this was a retrospective cohort study with a lower level of evidence than the randomized controlled trials. However, the application of PSM to reduce the influence of confounding factors can also increase the persuasiveness of the study.

Reporting Checklist: The authors have completed the STROBE reporting checklist. Available at https://jgo.amegroups.com/article/view/10.21037/jgo-22-166/rc

Conflicts of Interest: All authors have completed the ICMJE uniform disclosure form (available at https://jgo.amegroups.com/article/view/10.21037/jgo-22-166/coif). The authors have no conflicts of interest to declare.

Ethical Statement: The authors are accountable for all aspects of the work in ensuing that questions related to the accuracy or integrity of any part of the work are appropriately investigated and resolved. The study was conducted in accordance with the Declaration of Helsinki (as revised in 2013). Since the data of this project were all extracted from the SEER database and did not involve patient safety, privacy, and postoperative follow-up, no informed consent and no ethics committee approval were required.