Comparison of the safety and prognosis of sequential regorafenib after sorafenib and lenvatinib treatment failure in patients with unresectable hepatocellular carcinoma: a retrospective cohort study

Primary liver cancer is the seventh most commonly occurring malignant tumor worldwide, and ranks fourth in terms of cancer-related mortality worldwide. There are about 841,080 new cases and 781,631 deaths per year (1). China is a country with a high incidence rate of liver cancer, and the number of new cases and deaths accounts for about 50% of the worldwide cases (2). Hepatocellular carcinoma (HCC) is the most common type of liver cancer. HCC patients are mostly at the advanced stage when they are diagnosed (3), and the prognosis of these patients is poor.

A total of 73 patients with unresectable HCC who accepted regorafenib in our hospital from April 2020 to August 2021 were selected. After screening by the inclusion and exclusion criteria, 50 patients were finally included in this study. This study was conducted in accordance with the Declaration of Helsinki (as revised in 2013). The retrospective study protocol was reviewed and approved by The Ethics Committee of Eastern Hepatobiliary Surgery Hospital. All patients provided informed consent before treatment.

The inclusion criteria of this study were as follows: (I) Eligible patients were adults with HCC confirmed by pathological assessment or non-invasive assessment according to the American Association for the Study of Liver Diseases criteria for patients with confirmed cirrhosis (9); (II) ≥18 years old, ≤75 years old; (III) Eastern Cooperative Oncology Group (ECOG) performance status score 0–2; (IV) not suitable for radical surgical resection; (V) at least 1 measurable lesion by the modified Response Evaluation Criteria in Solid Tumors for HCC (mRECIST) and RECIST version 1.1 (10); (VI) Child-Pugh grade A or B; (VII) no history of other tumors; (VIII) in the course of treatment, targeted therapy only used first-line drugs sorafenib and lenvatinib and the second-line drug regorafenib; (IX) the clinical data of the included patients were complete; (X) the patient signed an informed consent form.

According to the use of first-line targeted drugs, 50 patients were divided into the sorafenib group (n=22) and lenvatinib group (n=28). If the patient’s disease progressed after receiving sorafenib or lenvatinib, sequential regorafenib was administered. Regorafenib was administered orally at 160 mg once daily during weeks 1–3 of each 4-week cycle. Regorafenib was received until the disease progressed according to the criteria in RECIST version 1.1 or mRECIST, the patient died, or had intolerable adverse events.

The records of adverse events included skin reactions, weight, sleep quality, fatigue, vital signs, blood biochemical indicators, urine and stool routine tests, and cardiopulmonary function. Adverse events were graded according to the National Cancer Institute Common Terminology Criteria for Adverse Events version 4.0 (11). The evaluation of intrahepatic lesions was performed using liver magnetic resonance imaging (MRI), which was evaluated every 2 months until the patient stopped receiving regorafenib or died. According to the size of the lesion on the liver MRI and the extent of the lesion enhancement, the RECIST version 1.1 or mRECIST standard was used to evaluate the therapeutic effect (10,12). At the same time, the therapeutic effect was evaluated according to the changes in alpha fetoprotein (AFP) level (13,14).

Patients were followed up every 2 months after receiving regorafenib. The tests of blood biochemistry, tumor markers [AFP, carcinoembryonic antigen (CEA), carbohydrate antigen 199 (CA 199)], urine and stool routine tests, heart and lung function examination, abdominal B-ultrasound, and liver MRI were performed at each of the follow-up visits. At the same time, a detailed record was obtained of the patient’s adverse events after receiving regorafenib, such as hypertension, rash, fatigue, and weight loss, among others. According to the patient’s adverse events, the attending physician decided whether to continue the original regimen of regorafenib or reduce the dose or stop regorafenib.

Measurement data are described by median (range), and the independent sample t-test or Mann-Whitney U test was performed to compare differences between groups. Count data are described by number (percentage), and differences were compared by the chi-square test or Fisher’s exact test. The Kaplan-Meier method was used to draw survival and PFS curves. 95% CI represent relative risk. P<0.05 was considered to indicate statistical significance. All data were analyzed by IBM SPSS Statistics for Windows software, version 26.0 (IBM Corp., Armonk, NY, USA). 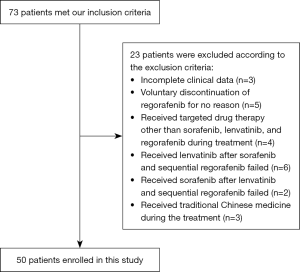 Figure 1 The flow chart of this study.

Other treatments before and after receiving regorafenib

Summary of other treatments before or after regorafenib

Complications of patients who accepted regorafenib

The efficacy of regorafenib

Evaluation according to RECIST 1.1 and mRECIST standards

However, research on second-line targeted drugs for HCC is not clear, and there is a lack of research on sequential second-line targeted treatments after different first-line targeted drugs. Especially, there is a lack of studies on sequential regorafenib after sorafenib and lenvatinib treatment failure in HCC patients. This study is a real-world study of regorafenib used for unresectable HCC patients. It is also the first study reporting the adverse reactions, clinical efficacy, and long-term prognosis of sequential regorafenib after sorafenib and lenvatinib treatment failure in HCC patients in detail. Besides, our study first reported that there is a difference in the long-term prognosis of patients on sequential regorafenib after sorafenib and lenvatinib treatment failure. There are great significance for the treatment of HCC, especially for the treatment of targeted drugs for HCC. Our results show that regorafenib is safe for HCC patients. The overall incidence of adverse events was 68%, most of which were grade I/II adverse events. The incidence of grade III/IV adverse events was 24%, which is basically consistent with the reports of previous study (7). A previous study reported that the ORR of regorafenib was 7.7% and the DCR was 53.4% (16). Another study also reported that the ORR of regorafenib combined with TACE was 35.3% and the DCR was 76.5% (17). In this study, as a second-line targeted drug, regorafenib had an ORR of 14.0–22.0% and a DCR of 62.0–60.0%. The median TOS of the 50 HCC patients was 24.2 months (95% CI: 21.1–27.3), which was basically consistent with the results of the phase III RESORCE trial (18). A real-world study in South Korea showed that the median ROS was 12.1 months and the median RPFS was 3.2 months (16). In our study, the median ROS was 11.7 months (95% CI: 9.4–14.0) and the median RPFS was 6.7 months (95% CI: 4.5–9.0). The median RPFS reported in our study is better than that reported in previous studies. This may be due to the fact that 50% of the patients included in our study were treated with TACE while receiving regorafenib. A study reported that the combination of regorafenib and TACE can improve the RPFS of HCC patients. In patients treated with regorafenib combined with TACE, the median RPFS can reach 9.1 months, and the median ROS can reach 14.3 months (19). In addition, a previous study has reported that regorafenib results in an anti-tumor immune response for other cancers (20). In this study, 82.0% of patients received programmed cell death protein 1 (PD-1) treatment while receiving regorafenib. Whether receiving regorafenib combined with PD-1 treatment can improve the efficacy for HCC patients is still unclear, making it worthy of further thought and attention. Further analysis found that the median TOS and ROS of the lenvatinib group were longer than those of the sorafenib group. However, the results showed that the RPFS of the lenvatinib group was not significantly different from that of the sorafenib group. The curve trend showed that the RPFS of the lenvatinib group was better than that of the sorafenib group. The lack of significant differences may be due to the small sample size of our study. Regarding the different prognoses of different first-line targeted drugs followed by regorafenib, we suspect that the reason may be related to the different targets of the first-line targeted drugs. Although sorafenib and lenvatinib are both multikinase inhibitors (21,22), the specific targets and pathways of the 2 targeted drugs are different. Sorafenib mainly acts on c-CRAF, BRAF, mutant BRAF, KIT, FLT-3, RET, and VEGFR 1-3, while lenvatinib mainly acts on VEGFR 1-3, FGFR 1-4, PDGFα, KIT, and RET (23,24). Compared with sorafenib, lenvatinib can act on FGFR. One study reported that after inhibiting FGFR in HCC cells, epidermal growth factor receptor (EGFR) can feedback activation of its downstream PAK2-ERK5 signaling pathway and its common downstream MEK1/2-ERK1/2 signaling pathway with FGFR, resulting in HCC cells having a strong ability to survive and proliferate under the condition of continuous use of targeted drugs (25). Therefore, the 2 targets of EGFR and FGFR play an important role in the efficacy of targeted drugs. Lenvatinib can act on FGFR 1-4. However, EGFR would be upregulated when lenvatinib inhibits FGFR, and results in the resistance of HCC cells to lenvatinib (25). Regorafenib can act on EGFR. However, sorafenib cannot have an effect on these 2 targets. This may be the reason why the efficacy of lenvatinib followed by regorafenib is better than that of sorafenib followed by regorafenib. Regarding the specific reasons for the different prognoses of different first-line targeted drugs followed by regorafenib, we are conducting further exploration and verification using cytology.

It should be noted that this study is a single-center, small-sample, real-world study. Thus, the results need to be further validated in large-sample prospective studies.

Funding: This study was funded in full by the WuMengchao talent plan fund.

Reporting Checklist: The authors have completed the STROBE reporting checklist. Available at https://jgo.amegroups.com/article/view/10.21037/jgo-22-404/rc

Conflicts of Interest: All authors have completed the ICMJE uniform disclosure form (available at https://jgo.amegroups.com/article/view/10.21037/jgo-22-404/coif). The authors have no conflicts of interest to declare.

Ethical Statement: The authors are accountable for all aspects of the work in ensuring that questions related to the accuracy or integrity of any part of the work are appropriately investigated and resolved. This study was conducted in accordance with the Declaration of Helsinki (as revised in 2013). The retrospective study protocol was reviewed and approved by The Ethics Committee of Eastern Hepatobiliary Surgery Hospital. All patients provided informed consent before treatment.