Survival and prognostic factors for postoperative primary appendiceal cancer: a retrospective cohort study based on the Surveillance, Epidemiology, and End Results database

Primary appendiceal cancer is a rare malignant tumor of the digestive system, the incidence of which has been increasing in recent years (1). Between 2000 and 2016, the incidence of malignant appendiceal cancer increased by 232% and 292% in the United States and Canada, respectively (2). Primary appendiceal cancer shares a common embryonic origin with colon cancer (3). Owing to the abundance of enteroendocrine cells in the appendix wall, carcinoids are the most common histological type of appendiceal cancer, accounting for more than half of all such malignancies, and are discovered in 7 out of every 1,000 appendectomy specimens (3,4). Primary appendiceal cancer is rarely diagnosed before surgery (5), and it is usually discovered accidentally, in specimens resected for acute appendicitis (6). Due to its lack of characteristic clinical features, primary appendiceal cancer may be misdiagnosed as ovarian cancer in the absence of pathological testing (7). Surgery remains the best curative treatment for cancers of the appendix and allows for the most accurate diagnosis (8). Most studies on appendiceal tumors are isolated case reports (9-12), and there is a lack of clinical trials or meta-analyses with large samples. In 2018, Li et al. conducted a retrospective study of 50 cases of low-grade appendiceal mucinous neoplasms (LAMN) and found when LAMN was treated surgically with resection of the primary site in early stage disease or with pushing invasion, there was an excellent prognosis and expanded surgical procedures were unnecessary (13). Another study showed that for patients with appendiceal mucinous neoplasm misdiagnosed as ovarian cancer, the median peritoneal cancer index (PCI) and lactate dehydrogenase (LDH) levels were identified as independent predictors of poor overall survival (OS) (14). These studies focused on a single pathogenic kind of appendiceal tumor, and neither explored the prognostic influence of chemotherapy. In previous studies based on data from the Surveillance, Epidemiology, and End Results (SEER) database, they focused on the incidence of appendiceal cancer and the impact of different pathological types on survival, rather than on the impact of treatment on survival (1,15). The influence of many factors, such as age, tumor size, and grade, on the survival of postoperative patients remains largely undetermined, and whether adjuvant treatment can prolong patient survival after appendectomy is also controversial. Therefore, in this study, we aimed to analyze data from the SEER database to identify the prognostic factors of patients with primary appendix cancer after surgery and provide more guidance for clinical practice. We present the following article in accordance with the STROBE reporting checklist (available at https://jgo.amegroups.com/article/view/10.21037/jgo-22-454/rc).

This study is a retrospective cohort analysis of freely accessible data retrieved from the Incidence-SEER Research Plus Data, Nov 2020 Sub (1975–2018) (https://seer.cancer.gov/). Patients from between 2004 and 2015 were selected to obtain survival information. The follow-up deadline is November 2020. Patients who met the following criteria were included in the study: (I) a diagnosis of primary appendiceal cancer; (II) an International Classification of Diseases for Oncology (ICD-O)-3 behavior code of malignant; and (III) a history of appendix surgery. Patients with incomplete survival information were excluded. Figure 1 shows patient selection flow chart. 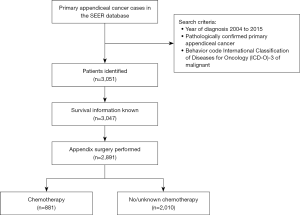 OS was defined as the time from surgery to the date of death or the last follow-up. Cancer-specific survival (CSS) was defined as the time from surgery to the date of cancer-related death. Survival curves, according to different factors, were obtained by Kaplan-Meier method. Median survival time and 5-year OS rate were estimated with the Kaplan-Meier method. Independent prognostic factors were determined by univariate and multivariate analyses using the Cox proportional-hazards regression model. All factors acquired from SEER database are included in the Cox multifactor analysis. Patients were divided into two categories, those who received chemotherapy and those who did not receive chemotherapy or did not know whether to receive chemotherapy. The chi-square test was used to compare differences between the two groups. The annual percentage change (APC) was calculated using the weighted least squares method (https://seer.cancer.gov/). The SPSS 26.0 statistical package (IBM Corporation, Armonk, NY, USA) and GraphPad Prism 6 (GraphPad Software Inc., San Diego, CA, USA) were used for all statistical analyses. Statistical significance was set at two-sided P<0.05.

The age-adjusted incidence of appendiceal cancer

Figure 2 Age-adjusted incidence rate of appendiceal cancer between 2004 to 2015. 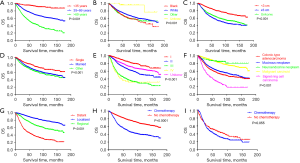 Figure 3 Kaplan-Meier survival analysis. Age (A), race (B), tumor size (C), marital status (D), grade (E), histologic type (F), stage (G), and use of chemotherapy (H) were related to OS. Chemotherapy use (I) was not associated with OS in patients with distant metastases. OS, overall survival.

OS and CSS were analyzed using univariate and multivariable Cox proportional-hazards models. Cox regression univariate analysis showed that age, race, marital status, tumor size, histologic type, grade, and stage were all significant risk factors for OS (P≤0.001). Remarkably, treatment with chemotherapy was associated with a worse prognosis. The univariate analysis of CSS produced the same results. In multivariate OS analysis, age, race, histologic type, grade, stage, and chemotherapy status were all independent prognostic indicators. Moreover, these factors were also found to be independent predictors of CSS. Compared with that for Black patients, the risk of death for White patients was decreased by 31.8% (HR =0.682; 95% CI: 0.532–0.874). Also, chemotherapy (HR =1.321; 95% CI: 1.111–1.570) was revealed to be an independent indicator of poor prognosis. More detailed results from the univariate and multivariable analyses are shown in Tables 3,4.

Univariate and multivariate analysis of prognostic factors associated with OS

Univariate and multivariate analysis of prognostic factors associated with CSS

One earlier study that used data from 2000 to 2009 reported that the incidence of primary appendiceal cancer was increasing annually, with the most common histologic type being mucinous adenocarcinoma (1). The present work similarly found that the incidence of primary appendiceal cancer continued to increase in the period under study, with the overall age-adjusted incidence rate per 100,000 population steadily increasing from 0.58 to 1.63 between 2004 and 2015. However, unlike the earlier study, we found that malignant carcinoid was the most common histologic type. Research has shown that the incidence of primary appendiceal cancer is higher in older people than in younger people (19). Consistent with this, our study found that patients aged 69 and over had the highest risk of death among all the age groups in the analysis. We also found that the risk of death was higher for Black patients than for White patients. In a previous study, McCusker et al. reported that the OS rate was significantly worse in patients with SRCC than in patients with other tumor types (15). Lowly differentiated adenocarcinoma and SRCC histopathology are negative prognostic indicators (20-23). In line with this, in our analysis, patients with low-grade tumors (grade 1 or 2), who accounted for 80.3% of patients whose histological grade was known, had a favorable prognosis.

In our study, the death risk was highest in patients with SRCC (HR =1.976; 95% CI: 1.599–2.443). Among patients who undergo colon cancer surgery, those with SRCC have a roughly 50% increased risk of death compared to those with classical adenocarcinoma (24).

For surgically resectable appendiceal cancer, cytoreductive surgery and hyperthermic intraperitoneal chemotherapy are widely accepted treatments (25). In terms of 5-year recurrence-free survival and 5-year OS, laparoscopic surgery is comparable to open surgery and can be considered as a treatment option for primary appendiceal cancer (26). Appendectomy alone offers a survival advantage over colectomy for patients with carcinoid tumors (27). Anti-vascular endothelial growth factor (anti-VEGF) agents should be seriously considered in the treatment of individuals with higher-grade appendiceal tumors who are not potential candidates for curative surgical resection (28). Previous studies have shown that chemotherapy benefits patients with appendiceal cancer who have high-grade or poorly differentiated tumors (29,30). However, there was no significant benefit from chemotherapy in analysis of all the patients included in this study. Furthermore, chemotherapy did not have a prolonged survival effect for patients with distant metastases. This observation was likely due to patients with “no chemotherapy” and “unknown” chemotherapy status being grouped together in the SEER database, which might have led to some deviation.

The inherent limitations of using data obtained from the SEER database were also limitations of this study. The SEER database does not provide detailed chemotherapy information such as drugs, dose, and duration; therefore, it is unclear whether the chemotherapy received by patients was given before, during, or after their surgery. Moreover, information regarding underlying diseases, genomics, postoperative complications and chemotherapy side effects is not available from the database.

Many clinical trials related to immunotherapy and targeted therapy in gastric and colorectal cancers have been conducted, and significant progress has been made in these areas. For example, the phase III ToGA (Trastuzumab for Gastric Cancer) trial found that the median OS of patients with HER2-positive locally advanced, recurrent, or metastatic gastric or gastroesophageal junction adenocarcinoma is improved by the addition of trastuzumab to first-line chemotherapy (31). At the 2020 ASCO Gastrointestinal Cancers Symposium, Boku et al. reported that the 3-year OS rate was higher in the nivolumab group than in the placebo group (5.6% vs. 1.9%) (32). As a result, nivolumab was approved in Japan as a third-line treatment for gastric cancer. As early as 2004, the United States Food and Drug Administration approved cetuximab, a monoclonal antibody targeted to epidermal growth factor receptor (EGFR), and bevacizumab, a humanized IgG monoclonal antibody targeted to VEGF-A, for the treatment of metastatic colorectal cancer (33,34). However, at present, the efficacy of these targeted agents against appendiceal tumors is unknown, and there is a lack of evidence from large clinical trials. Therefore, large-scale clinical trials for appendiceal cancer are required immediately.

Funding: This study was supported by the National Natural Science Foundation of China (Grant No. 82002479).

Reporting Checklist: The authors have completed the STROBE reporting checklist. Available at https://jgo.amegroups.com/article/view/10.21037/jgo-22-454/rc

Conflicts of Interest: All authors have completed the ICMJE uniform disclosure form (available at https://jgo.amegroups.com/article/view/10.21037/jgo-22-454/coif). The authors have no conflicts of interest to declare.