Prognosis of patients with esophageal squamous cell carcinoma undergoing surgery versus no surgery after neoadjuvant chemoradiotherapy: a retrospective cohort study

Esophageal cancer (EC) is the sixth most common cancer and the fourth leading cause of cancer death in China (1). Cases originating in China account for about 53% of new cases of EC worldwide (2). At present, the clinical treatment of EC is mainly surgical resection, radiotherapy and chemotherapy. EC can be divided into two subtypes: esophageal squamous cell carcinoma (ESCC) and esophageal adenocarcinoma (EAC). EAC is dominant in the western population, but in China, more than 90% of EC is ESCC (2). ESCC has the characteristics of easy metastasis and recurrence. It’s reported that 60–70% of Chinese patients are diagnosed with locally advanced EC that cannot be cured by surgery alone (1). Recent studies have confirmed that Neo-CRT combined with surgery is the standard treatment for locally advanced ESCC (3,4). It has been reported that the pathological complete response (pCR) rate may be up to 49% after ESCC (5). The relatively high rate of pCR, combined with the high invasive and risk of esophageal surgery, make some clinicians prefer a wait-and-see approach with close follow-up. Therefore, for patients with ESCC after Neo-CRT, whether to continue surgery has become a clinical problem. We believe that it is necessary to study the prognosis of patients undergoing surgery and non-operation after Neo-CRT. We present the following article in accordance with the STROBE reporting checklist (available at https://jgo.amegroups.com/article/view/10.21037/jgo-22-296/rc).

This was a retrospective cohort study. We retrospectively studied patients with locally advanced ESCC who were treated in Taizhou Hospital of Zhejiang Province Affiliated to Wenzhou Medical University from June 2007 to December 2014. Strict control of inclusion and exclusion criteria was required due to possible research selection bias. The inclusion criteria were as follows: Clinical stage T1-4N1M0/T4N0M0 (second stage B or third stage) according to American Joint Committee on Cancer (AJCC) cancer staging manual 8th edition; age 18–70 years; hematology, kidney, and liver function were normal; and the Karnofsky performance score of ≥90. We excluded patients with a history of other malignant tumors; those who were not suitable for surgery due to comorbidities. We collected data on 451 patients with locally advanced ESCC. A total of 227 patients who underwent surgery alone were excluded. In addition, 1 patient who received neither Neo-CRT nor surgery was excluded from the study. A total of 223 patients (189 males and 34 females) were enrolled (Figure 1). At the same time, 38 of these patients did not undergo surgery after Neo-CRT (non-operation group) and 185 patients underwent surgery after Neo-CRT (operation group). 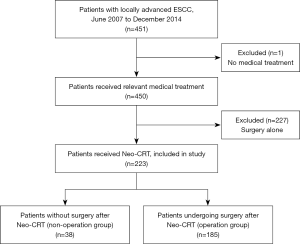 The study was conducted in accordance with the Declaration Helsinki (as revised in 2013). This study was approved by Medical Ethics Committee of Taizhou Hospital of Zhejiang Province Affiliated to Wenzhou Medical University (No. K20220423). Individual consent for this retrospective analysis was waived.

All cases were administered intravenous infusion of vinorelbine 25 mg/m2 on days 1 and 8, cisplatin 75 mg/m2 within 3 hours on day 1 or cisplatin 25 mg/m2 within 2 hours on days 1 to 4, every 3 weeks for 2 cycles. At the same time, radiation therapy was given at 2.0 Gy once, 5 times a week, with a total dose of 40.0 Gy. All cases received external irradiation using three-dimensional (3D) conformal radiotherapy.

Patients in non-operation group did not undergo surgery for various reasons, and those in operation group underwent surgery 4–6 weeks after the end of radiotherapy and chemotherapy. Esophagectomy was performed on the right transthoracic (McKeown or Ivor Lewis), including thoraco and abdominal lymph node dissection.

The primary outcome of this study was overall survival (OS), defined as the time from the date of enrollment to the date of death or last follow-up. Adverse reactions to Neo-CRT were assessed according to The National Cancer Institute Common Terminology Criteria for Adverse Events (CTCAE) version 3.0 (https://ctep.cancer.gov). All patients were followed up regularly through outpatient appointments or telephone calls. Clinical follow-up is performed every 3 months for the first year and every 6 months thereafter until the patient dies or the deadline. Information on the first postoperative recurrence was used for this study. The data cutoff for the analysis presented here was 31 December, 2019.

The software SPSS 24.0 (IBM Corp., Armonk, NY, USA) was used for statistical analysis. We collected the clinical characteristics, adverse reactions of Neo-CRT, recurrence and survival, and evaluated the prognosis of the two groups. The baseline characteristics of the patients were compared with Student’s t-test and Mann-Whitney U test. Clinical stages and adverse reactions were compared by chi-squared test. The OS was calculated by Kaplan-Meier method and compared by log-rank test. Cox proportional hazards model was used for univariate and multivariate analysis to evaluate the impact of different factors on survival, expressed as hazard ratios (HRs). Covariates included age, gender, tumor location, clinical T stage, N stage, surgery, and recurrence. All tests were set at 2-tailed P<0.05.

Baseline characteristics of both patient groups

Among 223 patients with Neo-CRT, 38 cases did not undergo surgery, with a non-operative rate of 17.0%. There were many reasons for not undergoing surgery, including 29 patients who refused surgery, 2 patients with disease progression, 2 patients with poor general condition who could not tolerate surgery, 1 patient with cerebral infarction, and 4 patients who died of pneumonia, esophageal bleeding (n=2), and a car accident, respectively (Table 2).

Causes of patients without surgery

Comparison of incidence of adverse reactions between the two groups

Distribution of adverse reactions in the two groups 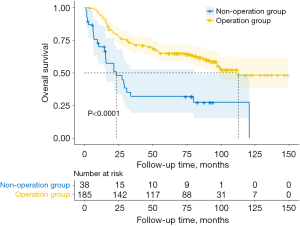 Follow-up results of both patient groups 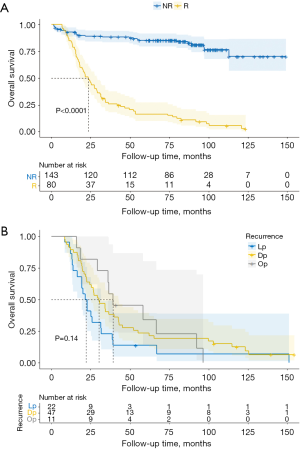 Adverse events are adverse medical events that occur after patients or subjects in clinical trials receive a drug, but they do not necessarily have a causal relationship with treatment. Over the years, platinum-based therapies have been widely used in Neo-CRT for patients with ESCC and have achieved satisfactory results (4,6-9). However, the adverse reactions caused by chemotherapy have also attracted much attention. In this retrospective analysis, the most common adverse reaction after Neo-CRT was leukopenia, which is consistent with previous clinical trials of Neo-CRT for ESCC (10-12). In this data, we can clearly see that the infection rate of the 2 patient groups was significantly different, the infection rate of non-operation group was significantly higher than that of operation group. Whether the infection factor is the influencing factor of patients without surgery remains to be further studied.

According to the current data, for patients with locally advanced ESCC, the OS of patients treated with Neo-CRT combined with surgery was significantly better than that of those treated with Neo-CRT alone (without surgery), which was inconsistent with the previous literature (13). Advances in surgical techniques may be part of the reasons.

There were some limitations to this paper. Due to the retrospective analysis, the data were not sufficiently detailed for our purposes. In addition, this study did not include patients with poor general condition and those over 70 years old. Further study is required to investigate the applicability of our finding to these patients. Some patients were followed up for too short a time and their ideal outcomes may have thus been overlooked. Additionally, the two groups patients are not completely comparable and need further study.

To sum up, no matter in terms of recurrence rate or OS rate, the prognosis of patients in operation group was better than that in non-operation group. Therefore, Neo-CRT combined with esophagectomy is recommended for locally advanced ESCC with acceptable surgical risk.

Reporting Checklist: The authors have completed the STROBE reporting checklist. Available at Available at https://jgo.amegroups.com/article/view/10.21037/jgo-22-296/rc

Conflicts of Interest: All authors have completed the ICMJE uniform disclosure form (available at https://jgo.amegroups.com/article/view/10.21037/jgo-22-296/coif). The authors have no conflicts of interest to declare.

Ethical Statement: The authors are accountable for all aspects of the work in ensuring that questions related to the accuracy or integrity of any part of the work are appropriately investigated and resolved. The study was conducted in accordance with the Declaration Helsinki (as revised in 2013). This study was approved by Medical Ethics Committee of Taizhou Hospital of Zhejiang Province Affiliated to Wenzhou Medical University (No. K20220423). Individual consent for this retrospective analysis was waived.