Esophageal cancer (EC) is one of the most common cancers worldwide (1). In 2020, 604,100 new cases of EC were reported, and EC was ranked as the 6th leading cause of death from cancer (1). Esophageal squamous cell carcinoma (ESCC) and esophageal adenocarcinoma (EAC) are the two major histological types of EC (2). During the last few decades, the incidence of EAC has been rising rapidly, and it has become the most common esophageal malignancy in Western countries (3,4). According to a previous study, liver metastasis occurs in approximately 20% of EAC cases, and the liver is the most common organ of metastasis (5). With a median overall survival (OS) of 8–10 months and a 5-year OS rate <5%, the prognosis of EC patients is extremely poor (6).

Patients with esophageal adenocarcinoma with liver metastasis (EACLM) are classified as stage IVB under the tumor, node, metastasis (TNM) classification system, and are considered suitable for palliative therapy, such as chemotherapy (CT), palliative radiation therapy (RT), and salvage surgery (7-9). Systemic therapy can provide palliation of symptoms, improved survival, and enhanced quality of life in patients with locally advanced or metastatic esophageal or esophagogastric junction (EGJ) cancers (10-12). Radiation alone rarely cures EC, the combination of radiotherapy and concurrent CT has led to long-term survival approximately 25% of patients (13). Despite the increase in perioperative risks, the estimated 5-year survival of 25% has been reported in selected patients for salvage esophagectomy (2). However, the prognostic value of different treatment modalities for EACLM patients is not clear, with only a small number of retrospective case series have been described in the worldwide literature (7,14,15). Further, there is also a relative lack of knowledge about the prognostic factors for EACLM. Thus, the effects of optional treatment modalities on patients’ survival based on a large-scale cohort study urgently needed to be investigated.

This study sought to compare the OS and DSS of EACLM patients who were divided into the following groups: local therapy (surgery/radiation), systemic therapy (CT), combination therapy (surgery/radiation + CT), and no treatment using the Surveillance, Epidemiology and End Results (SEER) database. PSM analyses were performed to minimize the differences between the groups at baseline. We present the following article in accordance with the STROBE reporting checklist (available at https://jgo.amegroups.com/article/view/10.21037/jgo-22-420/rc).

The current study was a retrospective cohort study, and data about all the patients and their relevant information were obtained from the SEER database from 2010 to 2015. Follow-up data are obtained through active and passive methods. Data fields concerning patient vital status, date of last contact, treatment, and recurrence are updated to maintain accurate surveillance information. Patients were followed through the death date or the last follow-up date (December 31, 2018). The SEER database is an authoritative, public source of information on cancer incidence, mortality, prevalence, lifetime risk statistics, and survival in the United States (US) (16). We used SEER-Stat software (version 8.3.9) to access the database in this study. The study was conducted in accordance with the Declaration of Helsinki (as revised in 2013). All data were extracted from the public database and did not involve personally identifiable information, so informed consent was not required.

According to the SEER database coding manual, all patients with histologic type, 8140/3, as coded by the International Classification of Diseases for Oncology (ICD-O-3), were included in the study. Patients were excluded from the study if they met any of the following exclusion criteria: (I) were not diagnosed at the first screening; (II) did not have liver-only metastases; (III) had missing treatment information; and (IV) had <1 month of follow-up (these patients were excluded to limit the immortal time bias) (17).

The baseline demographic and clinical characteristics are described as the medians with interquartile ranges (IQRs) for the continuous variables, and as the percentages for the categorical variables. The different groups (alive vs. dead) were compared using logistic regression models for all variables.

For the univariate and multivariate regression analysis, the Cox regression model was used to assess the hazard ratios (HRs) and 95% confidence intervals (CIs). The proportional hazards assumption was met. OS was used as the primary endpoint and defined as the time from diagnosis of EACLM to death from any cause. DSS was used as the secondary endpoint and referred to the period between diagnosis of EACLM and death due to EACLM. All the variables were included in the multivariate analysis to predict the independent prognosis factors, and the OS and DSS curves were examined using the Kaplan-Meier (K-M) method and compared using the log-rank test.

PSM analyses were performed for sensitivity analysis. We used a PSM method to minimize the differences between the groups at baseline. A logistic regression model was conducted to evaluate the propensity score based on the following variables: age, gender, race, marital status, primary tumor site, T stage, N stage, and histological grade. A 1:1 PSM was implemented between patients with systemic therapy or no therapy, and their prognoses were also compared. We then further compared patients who underwent combination therapy and systemic therapy using a matching ratio of 1:2 to compare their prognoses. We used the nearest-neighbor matching algorithm based on the R package MatchIt and chose the caliper value at 10% of the standard deviation of the propensity score value as converted by the logit model. The standardized mean differences (SMD) before and after matching are illuminated in Figures S1,S2. The balance between datum line covariates in both the matched and unmatched cohorts was scanned by standardized differences, and <10% was adequately credible (19). After matching, the balance of variables between two groups was evaluated by the χ2 test and love-plot; a P value >0.05 for the χ2 tests or plots within two dashed vertical lines in the love-plot were considered balanced. R (version 4.0.5; https://www.r-project.org/) was used for the statistical analysis. A two-sided P<0.05 was considered statistically significant. 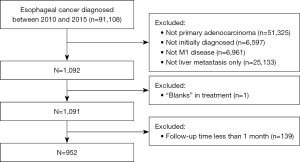 Clinical characteristics of patients with EACLM 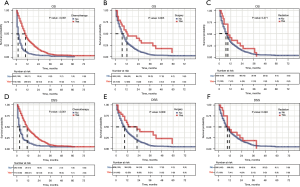 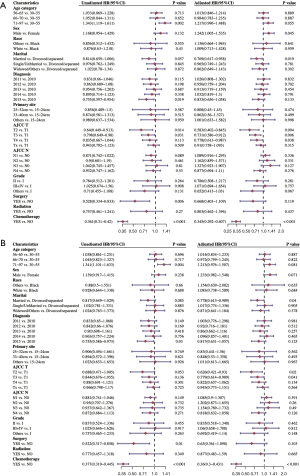 To better balance the patients in the systemic treatment group and the no therapy group, we performed a 1:1 PSM analysis for variables to decrease the selection bias and further compared their OS and DSS using the Cox regression model. The PSM analysis generated 224 matched pairs with similar baseline characteristics (see Table 2 and Figure S1). The results showed that patients who received systemic treatment demonstrated a better OS and DSS than those who did not received any therapy (9 vs. 2 months, P<0.001 and 9 vs. 3 months, P<0.001; see Figure 5).

The liver is the most common metastatic organ in patients with EAC, and such patients have very poor outcomes (20). In this large cohort study, we explored the therapeutic modalities and survival outcomes of patients with EACLM. We found that while the use of systemic therapy was the highest, the use of local and combination therapy was very low. Additionally, we also found that a substantial proportion of the patients did not receive any treatment, which was most likely due to their nutritional insufficiency and performance status. Based on our findings, CT remains the main treatment modality for patients with EACLM. Regardless of whether the patients received surgery or radiotherapy, patients treated with CT had a better OS and DSS. Our findings are consistent with the current National Comprehensive Cancer Network guidelines that recommend systemic therapy for patients with metastatic EAC to palliate symptoms, improve survival, and enhance patients’ quality of life (21).

Local therapy, including surgery or RT after effective systemic therapy, could reduce the tumor burden but their potential value in metastatic EC (mEC) remains controversial (9). Wu et al. analysed the OS of patients with mEC who were treated with local therapy, and found that patients who received preoperative RT had significantly better OS than patients who underwent primary surgery alone and postoperative RT (P<0.001) (9). In another study, Tanaka et al., found that there was no difference in survival between patients who underwent surgery and those who did not undego surgery (P=0.1291) (6). In our study, the multivariate survival analysis indicated that either surgery or RT was associated with a survival benefit. Thus, we are of the view that simple local therapy is ineffective and should not be recommended to patients with EACLM.

In the era of personalized treatment, a comprehensive multidisciplinary approach is widely applied to determine the optimal treatment for patients with locally advanced primary EC; however, its role is not well defined for patients with mEC (22). Previous research has shown that the survival of stage IVB EC patients with distant metastasis treated with multimodality therapy was signiﬁcantly better than that of patients treated with single-modality therapy or best supportive care alone (P<0.0001) (6). Shao et al. reported that there was no statistically significant difference between the CT group and chemoradiotherapy (CRT) group in terms of OS and cancer-specific survival (CSS) in mEC patients. Further, their subgroup analyses revealed that EAC patients who underwent CT had a favorable prognosis (8). In another study, Qiu et al. examined elderly stage IVB EAC patients with distant metastasis, and reported that compared to untreated patients, patients treated with surgery, RT, and CT had a better prognosis (OS and CSS: P<0.001) (20). Our PSM analyses showed that patients treated with systemic therapy had a much better prognosis in terms of OS and DSS than those who were untreated. Additionally, there was no significant difference in terms of OS between the patients who received combination therapy and systemic therapy. However, combination therapy had survival advantages in terms of the DSS of patients with EACLM. As local therapy (either surgery or RT) is inevitably accompanied by some treatment-associated complications (22,23), we suggest that combination therapy be considered for patients with EACLM after a comprehensive assessment by a multidisciplinary team (24).

Our study revealed that age is not an independent prognostic factor for EACLM patients. Previous studies have drawn inconsistent conclusions about the relationship between age and prognostic risk in mEC patients (5,25). However, one such study did not distinguish between the histology types of EAC and ESCC, while another study did not indicate which type of organ metastasis was more likely to occur in younger patients. The identification of the prognostic factors associated with the patients would help in the prognostication and management of EACLM.

We undertook a comprehensive analysis of the treatment patterns and the survival outcomes of EACLM patients; however, this study still had some limitations. First, the data obtained from the SEER database lacked some important information, including information about the radiation dose, quality of life, and CT drug regimens, which may have led to an immortal time bias. Second, all the patients examined in this study were from the US; thus, the results do not represent the global population. Finally, as immune checkpoint inhibitors, such as programmed cell death protein 1, and programmed death-ligand 1, are currently being developed and examined, the prognosis of patients will certainly improve. Thus, it is necessary to provide updated information using such data.

This is a large-scale report on the treatment patterns and prognosis of patients with EACLM. CT-based combination therapy may be the most effective treatment strategy for such patients. The findings need to be externally validated in the future, but they may be useful in guiding clinical decision making, directing individualized treatment strategies, designing clinical trials, and ultimately improving patient prognosis.

Funding: This work was supported by the Nature Science Foundation of Ningbo (No. 2021J261).

Reporting Checklist: The authors have completed the STROBE reporting checklist. Available at https://jgo.amegroups.com/article/view/10.21037/jgo-22-420/rc

Conflicts of Interest: All authors have completed the ICMJE uniform disclosure form (available at https://jgo.amegroups.com/article/view/10.21037/jgo-22-420/coif). The authors have no conflicts of interest to declare.