Hepatocellular carcinoma (HCC) is the sixth most common malignant tumor worldwide and the third leading cause of tumor-related deaths (1,2). Approximately 700,000 new cases of HCC are diagnosed every year, and more than half of them are Chinese patients (3,4). Currently, chronic hepatitis B virus infection is still considered as the main cause of HCC. In addition, chronic hepatitis C virus infection, eating food containing aflatoxin, alcoholism, and smoking are also important factors. In recent years, the incidence of diabetes and obesity has gradually increased, which are also high-risk factors for HCC that cannot be ignored (5,6). With the improvement of economic level and health awareness, as well as the expansion of the scope and intensity of hepatitis B screening, some HCC patients can be cured due to early detection and early treatment. However, due to the lack of obvious clinical manifestations in the early and middle stages of HCC, many patients are in the advanced stage when they are first diagnosed, losing the best time for treatment and contributing to poor prognosis. Therefore, elucidating the mechanism of the occurrence and development of HCC and developing clinical drugs for HCC have important clinical significance for improving the prognosis of advanced-stage HCC patients.

Zinc finger of the cerebellum (ZIC) family genes were first discovered in the cerebellum of adult mice and named after their abundant zinc finger protein expression (7). The ZIC gene family contains 5 members, namely ZIC1-5 genes (8). Prior studies have pointed out that ZIC genes are closely related to the occurrence and development of various tumors such as nervous system tumors, small cell lung cancer, endometrial tumors, gastrointestinal cancer, and liver cancer (9-12). ZIC5, as a member of the ZIC gene family, encodes a member of the C2H2-type zinc finger proteins which act as transcriptional repressors. ZIC5 is highly expressed in various types of tumors, resulting in rapid tumor progression and poor prognosis (13-19).

In this study, by analyzing ZIC5 expression in 33 types of tumors from The Cancer Genome Atlas (TCGA) database, we determined that ZIC5 is significantly upregulated in tumor tissues compared to normal tissues, including HCC. High ZIC5 expression in HCC was positively correlated with MKI67 and indicated poor prognosis. Our findings revealed that ZIC5 overexpression promoted the proliferation of HCC cells in vitro and significantly increased collagen type I alpha 1 (COL1A1) expression. We present the following article in accordance with the MDAR reporting checklist (available at https://jgo.amegroups.com/article/view/10.21037/jgo-22-335/rc).

ZIC5 mRNA expression levels and the correlation between ZIC5 and MKI67 in pan-cancer (including 33 types of cancers) were analyzed by UCSCXenaShiny, an R package for interactive analysis of UCSC Xena Data. Kaplan-Meier survival curves for the effect of ZIC5 mRNA expression level on HCC patient survival and COL1A1 mRNA levels in human HCC tissues (n=369) and normal liver tissues (n=160) were both obtained from Gene Expression Profiling Analysis (GEPIA) based on TCGA dataset (https://tcga-data.nci.nih.gov/tcga/). The study was conducted in accordance with the Declaration of Helsinki (as revised in 2013).

The complete coding sequence (CDS) of the human ZIC5 gene was amplified and inserted into the coding region of the pcDNA3.1-3xflag vector (YouBio, Changsha, China). ZIC5 overexpression was prepared by transient transfection of the plasmid via Lipofectamine 2000 (Invitrogen, Waltham, MA, USA).

Colony formation assays were performed to investigate the effect of ZIC5 on cell proliferation. Huh1 and HepG2 cells were seeded in 6-well plates at a density of 500 cells per well with 2 mL medium after transient transfection for 6–8 hours, and cultured for another 10 days with continuous replacement of fresh medium. Then, cells in 6-well plates were fixed in 4% paraformaldehyde (Solarbio, Beijing, China) for 20 minutes and stained with 1% crystal violet staining solution for 30 minutes. Cell colonies with more than 50 cells were counted and scanned.

Total RNA was extracted from Huh1 cells after transient transfection for 48 hours using a Spin Column Animal Total RNA Purification kit (Sangon Biotech, Shanghai, China). RNA concentrations were detected by a Nano-Photometer spectrophotometer (Implen, CA, USA). RNA was sequenced on an Illumina Novaseq platform (Novogene, Beijing, China). Given that there were no biological replicates, the edgeR program package was used to adjust the read counts through a scaling normalized factor before differential gene expression analysis. Then, differential gene expression analysis between the two conditions of Huh1 cells were executed by the edgeR R package (3.22.5). P values were adjusted using the Benjamini and Hochberg method. Fold change (FC) ≥2 and adjusted P value ≤0.05 were set as the thresholds for significantly differentially expressed genes (DEGs).

Statistical analyses were conducted using Student’s t-test. Each experiment was repeated 3 times, and the quantitative data were presented as mean ± SEM. P values less than 0.05 were considered statistically significant.

High ZIC5 expression was associated with poor prognosis of HCC

To further understand the role of ZIC5 in cancers, we analyzed its mRNA expression from pan-cancer datasets compiled using UCSC Xena. The analysis results showed that ZIC5 was abnormally expressed in a variety of cancers. ZIC5 expression had no significant difference in cancer vs. normal tissues only in a few cancers, including glioblastoma multiforme (GBM), kidney renal papillary cell carcinoma (KIRP), pheochromocytoma and paraganglioma (PCPG), sarcoma (SARC), skin cutaneous melanoma (SKCM), and thymoma (THYM) (Figure 1A). To emphasize the correlation between ZIC5 expression and cell proliferation, the relationship between the mRNA levels of ZIC5 and MKI67 were analyzed in the pan-cancer database. Pearson’s correlation analysis showed that the mRNA levels of ZIC5 were positively correlated with the mRNA levels of MKI67 in HCC, with r=0.57 and P<0.001 (Figure 1B, Table 1). Survival analysis of 90 cases with high ZIC5 expression and 275 cases with low/medium ZIC5 expression from TCGA dataset demonstrated that the group with high ZIC5 expression had a shorter overall survival time than the low/medium ZIC5 expression group, with P=0.00058 (Figure 1C). These data reveal the important clinical value of ZIC5 in HCC. 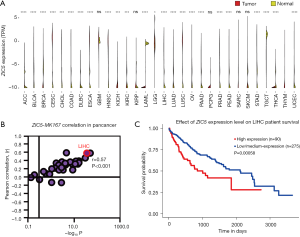 Correlation between ZIC5 and MKI67 in pan-cancer datasets

Upregulation of ZIC5 promoted the proliferation of HCC cells 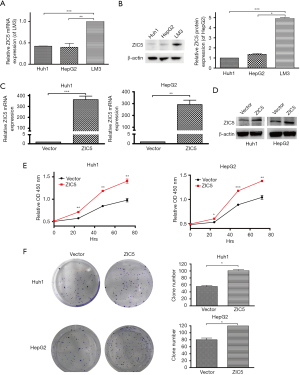 The proliferation of Huh1 and HepG2 cells was markedly increased by ZIC5 overexpression, especially at 48 and 72 hours (Figure 2E). Indeed, the colony formation ability of Huh1 and HepG2 cells was also increased after ZIC5 upregulation (Figure 2F). These findings suggest that ZIC5 upregulation can promote the proliferation of HCC cells.

To explore the possible downstream target genes related to ZIC5 in the regulation of HCC cell proliferation, RNA sequencing was conducted in Huh1 cells with vector and ZIC5 overexpression. According to the screening conditions of DEGs described in the methods (FC ≥2 and adjusted P value ≤0.05), a total of 1,025 DEGs were obtained in Huh1 cells after ZIC5 overexpression, including 861 upregulated genes and 164 downregulated genes (Figure 3A). Among these DEGs, a regulator of hepatic fibrosis, COL1A1, which was significantly increased by ZIC5 overexpression in Huh1 cells, attracted our attention. COL1A1, as the major component of type I collagen, has been reported to be a potential prognostic biomarker for multiple malignant tumors. A series of recent studies indicated that downregulation of COL1A1 could inhibit the proliferation, migration, invasion, and promote the apoptosis of HCC cells (21-23). Moreover, the mRNA expression levels of COL1A1 were increased in Huh1 and HepG2 cells with ZIC5 overexpression as detected by real time PCR (Figure 3B). Then, we analyzed relative COL1A1 mRNA levels in TCGA LIHC dataset including 369 HCC tissues and 160 normal tissues and found that COL1A1 mRNA was significantly higher in HCC tissues than in normal tissues (Figure 3C). 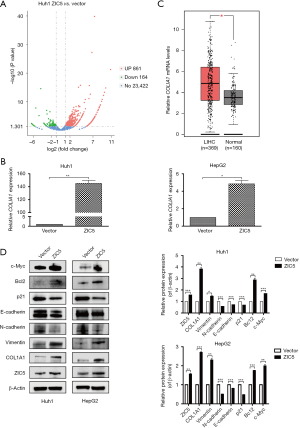 To further explore the underlying mechanism of ZIC5 in cell proliferation, we performed RNA sequencing of Huh1 cells overexpressing ZIC5. Analysis of the RNA sequencing results revealed that the expression of COL1A1, closely related to the occurrence and development of HCC, was increased after ZIC5 overexpression. The extracellular matrix (ECM) is a complex network structure of macromolecular substances that provides support and connections between tissues and cells (29). As an important part of the tumor microenvironment, the ECM plays critical roles in the development and metastasis of tumors (30,31). Collagen, as the major structural protein of the ECM, is involved in the formation of microfibrillar and fibrillar networks of basement membranes and ECM (32). COL1A1, as a common type of collagen, has been reported to be involved in the proliferation, migration, invasion, and prognosis of various tumors, such as HCC, breast cancer, ovarian cancer, astrocytoma, lung cancer, gastric cancer, mesothelioma, and colorectal cancer (21,33-38). In the present study, we found that upregulating ZIC5 levels could increase the expression of COL1A1, and the expression of COL1A1 in HCC tissues was significantly higher than that in normal tissues. Western blot analysis revealed that COL1A1 upregulation altered the expression levels of proteins related to proliferation, migration, invasion, cell cycle, and apoptosis, including decreased expression of E-cadherin, N-cadherin, and p21, and increased expression of c-Myc, vimentin, Bcl2, and p21 (Figure 3).

In summary, our study reveals a novel mechanism of ZIC5 in promoting HCC cell proliferation. ZIC5 promotes HCC cell proliferation, migration, and invasion by increasing COL1A1 expression. This indicates that ZIC5 may be a potential therapeutic target for HCC. Although we have not conducted in-depth research on its underlying mechanism, the current findings suggest a correlation between ZIC5 and COL1A1, which provides a new perspective for follow-up studies.

Our research confirmed that, compared with adjacent normal tissues, the expression of ZIC5 was significantly higher in HCC tissues. Patients with high ZIC5 expression had a shorter overall survival time. ZIC5 overexpression promoted the proliferation, migration, and invasion of HCC cells by upregulating COL1A1. These results reveal the role of ZIC5 in HCC and propose a relationship between ZIC5 and COL1A1 expression for the first time.

Reporting Checklist: The authors have completed the MDAR reporting checklist. Available at https://jgo.amegroups.com/article/view/10.21037/jgo-22-335/rc

Conflicts of Interest: All authors have completed the ICMJE uniform disclosure form (available at https://jgo.amegroups.com/article/view/10.21037/jgo-22-335/coif). The authors have no conflicts of interest to declare.