Recently, the incidence of malignant tumors has been increasing. The latest report from the National Cancer Center states that colorectal cancer (CRC) ranked second in cancer incidence and fifth in cancer mortality in China in 2019 (1). Relevant data from the United States show that the incidence of CRC in men has decreased at a rate of 3% per year over the past 5 years, with no significant change in the incidence rate in women (2). As a cancer with high morbidity and mortality, the mechanism underlying the development of CRC remains unclear and requires further exploration.

The tripartite motif protein (TRIM) family has been found to widely exist in humans (with more than 70 species having been identified) and some multicellular animals. The TRIM protein family is a group of proteins with highly conserved RING, B-box, double helix, and C-terminus (RBCC) structures in order from N-terminal to C-terminal (3). In addition, TRIM proteins are divided into 11 subgroups according to the C-terminal sequence (4,5), among which the PRY/SPRY sequence, also known as the B30.2 sequence, is the most common sequence (5).

A significant portion of the TRIM protein family comprises ubiquitin ligase (E3) activity (6,7), which plays a considerable role in mediating post-translational modifications of the protein by binding to ubiquitin-binding enzymes (E2). E3 activity is closely related to its RING structure. Ubiquitination is a post-translational modification of proteins that is very important in tumorigenesis. Previous studies on the TRIM protein family have shown that TRIM proteins play diverse roles in tumorigenesis. Most of them play a role in promoting tumor progression and metastasis, while others play a tumor-suppressive role (8-10). Certain TRIM family members have been shown to be potential molecular biomarkers for cancer diagnosis and prognosis, and potential therapeutic targets (11).

In mammals, partial gene sequences of Tripartite motif 52 (TRIM52) are duplicated from partial genes of TRIM41, mainly in the RING and B-box structural domains, and have been present in primate mammals for a long time, implying that TRIM52 plays an essential role in certain human biological processes. It has been found that TRIM52 is differentially expressed in different tumor cells. It has been reported that TRIM52 promotes tumorigenesis in ovarian cancer by activating the nuclear factor (NF)-κB signaling pathway. Knocking-down of TRIM52 in ovarian cancer cells suppresses cell invasion, cell migration and cell proliferation, while inducing apoptosis (12). Overexpression of TRIM52 promoted the biological activity of hepatocellular carcinoma. Downregulation of TRIM52 significantly upregulated p21 and PPM1A expression but suppressed the expression of MMP2, which induced dephosphorylation of Smad2/3 in hepatocellular carcinoma cells. In addition, down-regulation of TRIM52 inhibited the ubiquitination of PPM1A. Upregulation of PPM1A in hepatocellular carcinoma cells significantly suppressed the TRIM52-mediated cell biological activity. It can be seen that TRIM52 interacted with PPM1A (13). Downregulation of TRIM52 has been shown to inhibit kidney cancer progression (14). Non-coding (lnc)RNA TRIM52-AS1 knockdown inhibited the proliferation and metastasis of hepatocellular carcinoma cells. It has been shown to promote the growth and metastasis of hepatocellular carcinoma via miR-218-5p/ROBO1 (15). It was reported that TRIM52 upregulation promotes proliferation and invasiveness through activation of the Wnt/βcatenin pathway in lung cancer cells (16). The role that TRIM52 plays in colon cancer (CC) cells remains unknown. CRC is one of the most common cancers around the world as mentioned above. It has been reported that the possible mechanisms by which NF-κB can contribute to colon carcinogenesis include the activator of antiapoptotic gene expression, enhanced cell survival, and proliferation, regulation of angiogenesis, and promotion of metastasis of cancer cells (17). This study aimed to determine the different expression levels of TRIM52 in normal colon epithelial cells and CC cells, explore its effect on CC cells, and identify the underlying mechanisms associated with the NF-κB signaling pathway. We present the following article in accordance with the MDAR reporting checklist (available at https://jgo.amegroups.com/article/view/10.21037/jgo-22-317/rc).

Transwell experiments were employed for the cell migration and invasion assays. The upper chamber of the Transwell (Corning, Corning, NY, USA) was coated with Matrigel (Becton, Dickinson, and Co. Biosciences, Franklin Lakes, NJ, USA) at 37 ℃ in a 5% CO2 incubator for 30 minutes for the cell invasion assay. Indicated cells were trypsinized, resuspended in DMEM without serum, and placed in the upper chamber (5×104 cells/well). After that, DMEM with 10% FBS was added to the lower chamber. After 24 hours, a cotton swab was used to remove the cells in the upper chamber. Cells migrating into the lower chamber were washed by the phosphate-buffered saline (PBS), fixed in the 4% paraformaldehyde, and stained by the 0.5% crystal violet. Eventually, the cells were counted under a microscope in 4 random fields. The conditions for the cell migration assay were the same as the cell invasion assay, except for the Matrigel.

After the transfection for 48 hours, cells were harvested and washed with PBS. Then, the cells were stained with both Annexin V-fluorescein isothiocyanate (FITC) and propidium iodide (PI) in sequence at 4 ℃ for 30 minutes in a light-proof environment. Flow cytometry data were collected on the FACScan instrument (Becton Dickinson and Co., Mountain View, CA, USA).

Lipopolysaccharide (LPS; an activator of NF-κB P65), and pyrrolidine dithiocarbamate (PDTC; an inhibitor of NF-κB P65) were employed. The LPS (Sigma Aldrich, USA) was co-incubated with the knocked-down TRIM52 HCT116. The PDTC (MedChemExpress, Princeton, NJ, USA) was added to the overexpressed TRIM52 SW620. Protein expressions of nuclear P65 and plasmin P65 were detected to verify the activation of the NF-κB signaling pathway.

Knock down and overexpression of TRIM52 in CC cells

The small interfering (si)RNA (RiboBio, Guangzhou, China) (position 756–774, AGAAATACTGGAAGCATAC, Si-TRIM52 002; position 975–993, GGGCATGTGCTTTAAACAC, Si-TRIM52 003) was added to the HCT116 in the logarithmic growth phase according to the manufacturer’s instructions for 24 hours. The knocking down effect was verified by WB. The coding sequence of TRIM52 was amplified by reverse transcription polymerase chain reaction (RT-PCR) with the following primers: (forward 5'-CGGAATTCATGGCTGGTTATGCCACTACTC-3' and reverse 5'-CGGGATCCTTACTGATTATAGGCCTTGCTG-3'), and constructed into pCDH-CMV-MCS-EF1-CopGFP-T2A-puro (Sygenta Biotechnology Inc., Durham, NC, USA). Lentiviral empty vector was used as a control group. The TRIM52 overexpression lentivirus and control (Vector) lentiviruses were transfected by Lipofectamine 2000 (Invitrogen, Carlsbad, CA, USA).

The study was conducted in accordance with the Declaration of Helsinki (as revised in 2013). 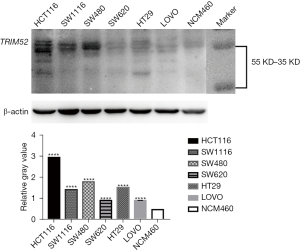 TRIM52 is upregulated in tumor tissues analyzed by TCGA database

The University of Alabama Cancer Database (UALCAN; http://ualcan.path.uab.edu/index.html) was used to find relevant data on TRIM52 expression in CC, and data analysis was performed to speculate on the possible role of TRIM52 in CC. By summarizing TCGA and UALCAN data, it was found that TRIM52 was highly expressed in tumor tissues compared with normal tissues (Figure 2A), and TRIM52 was significantly highly expressed in stage IV tumor tissues, which was statistically different compared with other stages (Figure 2B). This indicated that TRIM52 might be a marker of poorer prognosis. It was also found that the expression of TRIM52 correlated with the survival of tumor patients, and by comparing the survival curves, there was a statistical difference between the high expression TRIM52 group and the low expression group, indicating that TRIM52 may be related to the development of CC and is an indicator of poorer prognosis (Figure 2C). 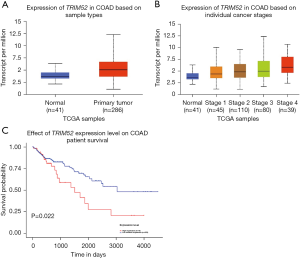 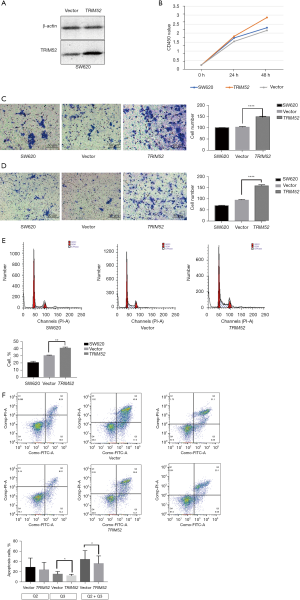 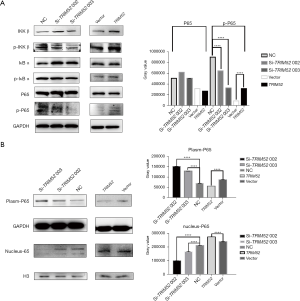 It has been reported that LPS binding to Toll-like receptor 4 (TLR4) causes activation of NF-κB (18). LPS was known as an activator of the NF-κB signaling pathway by promoting the phosphorylation of IKB. After LPS treatment with HCT116, p-IKB was found to be reduced and p-IKB ubiquitination hydrolysis was stimulated, which promoted activation of the NF-κB signaling pathway. The knockdown of TRIM52 expression in the HCT116 cell line still significantly reduced the expression of p-P65 (the gray value of P-P65: NC =2.89×105±95.4, SiR-TRIM52 =1.69×105±51.49, n=3, P<0.0001) and slightly reduced the expression of p-IKB (the gray value of p-IKB: LPS+NC =4.40×105±87.55, LPS+SiR-TRIM52 =2.79×105±89.27, n=3, P<0.0001), indicating that TRIM52 still had an inhibitory effect on the NF-κB signaling pathway after LPS activation, and the site where TRIM52 inhibited the NF-κB signaling pathway acted upstream of the phosphorylation of IKB. In contrast, after inhibition of NF-κB complex activity by PDTC, overexpression of TRIM52 in the SW620 cell line had little effect on the rise of p-P65 expression, and p-P65 was significantly reduced and almost none was expressed (Figure 6A,6B). 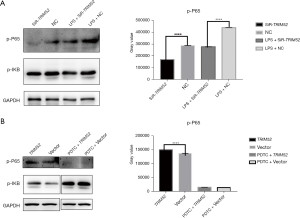 The TRIM52 protein belongs to the C-V isoform of the TRIM protein family, with 1 RING structure at a time from the N-terminal to the C-terminal, a B-Box2 structural domain, and lacking a distinct double helix structural domain and C-terminus. It has been shown as a promoter in ovarian cancer (12), hepatocellular carcinoma (13,15), and renal cancer (14), while its role in the development of CC had not been clarified

Our study demonstrated that TRIM52 is significantly highly expressed in CC cell lines. Cell proliferation and cell cycle showed a statistically significant decrease of approximately 20.83% in the proportion of S-phase cells in HCT116 cells following knockdown of TRIM52. In contrast, when TRIM52 was overexpressed in SW620, its G2M phase cells increased by about 29.03%. This result fully illustrated that TRIM52 plays a role in the cell cycle to promote cellular DNA replication, and most cells start DNA replication and enter the cell division process after DNA formation of 4-ploidy. The cell cycle results showed that there was a slight increase in the ratio of cells in the G2M phase (the second peak), with no significant statistical difference, which may be related to factors such as the inactivation of key proteins associated with cell division.

The results of apoptosis showed that expression of TRIM52 significantly changed (about 20–30%) in the proportion of apoptotic cells in CC cell lines HCT116 and SW620 in the middle and late stages, and exerted an inhibitory role on the cells. It was also confirmed that the presence of TRIM52 served as a promoting factor of tumor development in CC cell lines HCT116 and SW620. It was shown that TRIM52 promoted cell proliferation by facilitating the DNA replication process in CC cells and promoting cell progression from pre-division to the division phase. Apoptosis experiments demonstrated that TRIM52 acts as an inhibitor of apoptosis in CC cells.

In vivo experiments can be employed in the future to further explore the role of TRIM52 in colon carcinogenesis. In addition, the specific binding sites of TRIM52 require verification by further experiments.

Our study demonstrated that TRIM52 was significantly overexpressed, promoting proliferation, migration, and invasion while inhibiting apoptosis in CC cells. Our study also revealed that the regulation effect of TRIM52 on CC cells is closely related to the NF-κB signaling pathway, and TRIM52 serves as an upstream factor stimulating the transfer of P65 into the nucleus to activate the NF-κB signaling pathway, which provides a potential target for prognosis prediction or treatment of CC.

The authors would like to thank Professor Jiang Jianhai’s team from the Biochemistry Laboratory of Fudan Medical College for their guidance and support.

Reporting Checklist: The authors have completed the MDAR reporting checklist. Available at https://jgo.amegroups.com/article/view/10.21037/jgo-22-317/rc

Conflicts of Interest: All authors have completed the ICMJE uniform disclosure form (available at https://jgo.amegroups.com/article/view/10.21037/jgo-22-317/coif). The authors have no conflicts of interest to declare.