The Genomics of Drug Sensitivity in Cancer (GDSC) database is a collection of data from 75,000 experiments describing the response of approximately 200 anticancer drugs in more than 1,000 tumor cells. The GDSC database can be used to analyze the sensitivity and response of tumor cells to drugs. Variations in the cancer genome can affect the efficacy of clinical treatments, and different targets respond to drugs differently. GDSC data are important for discovering potential tumor therapeutic targets. A study (6) used GDSC database analysis to determine the characteristic gene sets of advanced gastric cancer and the correlation between these gene sets and fluorouracil, which can provide clues for determining the best combination of chemotherapy drugs for gastric cancer patients. Another study (7) constructed a risk score based on gene expression, which was used to predict the survival of gastric cancer patients and the sensitivity to chemotherapy drugs.

In this study, the differentially expressed transcription factors in gastric cancer and normal gastric tissues were screened using the RNA sequencing (RNA-seq) data of gastric cancer in the Cancer Genome Atlas (TCGA) database. Kyoto Encyclopedia of Genes and Genomes (KEGG) pathway enrichment analysis, interaction network construction, and prognostic correlation analysis were used to analyze the differentially expressed transcription factors. The interaction network and prognostic correlation analysis determined FOXM1 as a critical gene. We used GDSC to explore the correlation between FOXM1 gene expression and gene mutation and chemosensitivity. We present the following article in accordance with the STREGA reporting checklist (available at https://jgo.amegroups.com/article/view/10.21037/jgo-22-274/rc).

RNA-seq data of gastric cancer were downloaded from TCGA, which is public data (normal tissue =32 cases, gastric cancer tissue =375 cases). The downloaded RNA-seq data were combined into a gene expression matrix, and the matrix was normalized and logarithmically transformed. Tumor-related transcription factors were obtained according to Cistrome Project, and their expression was extracted from the data matrix to obtain a new matrix. The row name of the matrix was set as the sample serial number, and the column name was set as the expression of transcription factors. Single nucleotide polymorphism (SNP) data were downloaded from the TCGA database to obtain the mutation status of transcription factors in each sample. The corresponding clinical data of gastric cancer patients were downloaded from the TCGA database, including patient age, gender, survival status, and survival time. The study was conducted in accordance with the Declaration of Helsinki (as revised in 2013).

The KEGG database was used to analyze the pathway enrichment of differentially expressed transcription factors. FDR <0.05 was used as the screening standard to screen the pathways with significant differences.

Correlation between mutation and expression

Spearman test was used to explore the correlation between transcription factor mutation and gene expression.

Correlation between expression of transcription factors and chemosensitivity

All data were statistically analyzed by R software (MathSoft, USA) and related R package in this study. P<0.05 indicates that it is statistically significant. 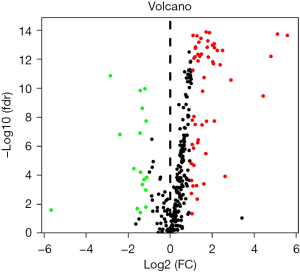 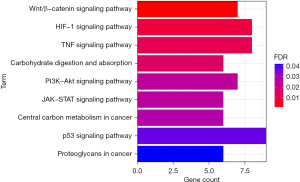 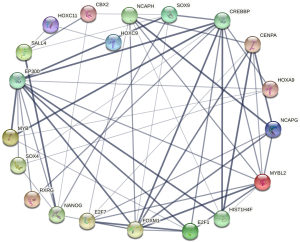 Since the above results indicated that FOXM1 was the most widely interacting transcription factor, it was considered as a potential biomarker for gastric cancer, and the relationship between its mutation and expression was further investigated. FOXM1 gene mutation was positively correlated with mRNA expression (R =0.22; P<0.05), as shown in Figure 4. 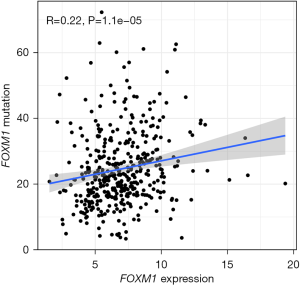 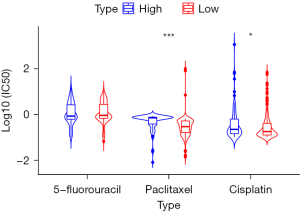 FOXM1 was the key transcription factor of gastric cancer identified in this study. We found that FOXM1 was highly expressed in gastric cancer, and its gene expression was positively correlated with gene mutation. We also found that FOXM1 was a risk factor for the prognosis of patients with gastric cancer. These results suggest that FOXM1 may promote the occurrence and progression of gastric cancer. A study pointed out that FOXM1 is overexpressed in Pan-cancer, which is related to the occurrence and progression of most malignant tumors (15). The study showed that the expression of FOXM1 was significantly increased at mRNA and protein levels in tumors with FOXM1 mutation, p53 inactivation and Rb-E2F abnormality (15). The results also illustrated that E2F and cyclin E1 regulate FOXM1 (15). It is important to point out that Barger et al. (15) found a mutation in FOXM1 in a pan-cancer study, resulting in a significant increase in FOXM1 expression, which is consistent with our conclusion. Furthermore, Wierstra (16) suggested that transcription factor FOXM1 is overexpressed in many human cancers, including liver cancer, gastric cancer, prostate cancer, brain cancer, breast cancer, lung cancer, colon cancer, pancreatic cancer, cervical cancer, ovarian cancer, and nervous system cancer. FOXM1 was involved in cell initiation, progression, metastasis, and the response to anti-cancer drugs.

We found that the IC50 of paclitaxel and cisplatin in the FOXM1 high expression group was higher than that in the FOXM1 low expression group. The results indicated that the higher the expression of FOXM1, the less sensitive the patients were to paclitaxel and cisplatin. There was no significant difference in the IC50 of FOXM1 high expression group and low expression group to 5-fluorouracil. Our analysis suggested that FOXM1 may not be involved in the induction of gastric cancer sensitivity to all chemotherapeutic drugs. Some existing studies also showed the relationship between FOXM1 and chemoresistance, which is consistent with our results (17-20). For example, Okada et al. (17) identified 53 gastric cancer patients whose immunohistochemistry was FOXM1 positive. Okada et al. (17) also found that FOXM1 expression was an important independent prognostic risk factor for overall survival and disease-free survival in gastric cancer patients through multivariate analysis. The results of Okada et al. (17) also showed that FOXM1 overexpression was significantly correlated with the drug resistance of docetaxel + 5-fluorouracil + cisplatin chemotherapy. In contrast, the 5-fluorouracil + cisplatin chemotherapy drug resistance was not significant in patients with advanced gastric cancer. Inhibiting overexpression of FOXM1 was a promising strategy for the treatment of advanced gastric cancer. Li et al. (18) considered that FOXM1 overexpression mediates the resistance of gastric cancer to docetaxel. They showed that FOXM1 acts with the downstream target tubulin unstable protein stathmin to change microtubule dynamics to protect tumor cells from docetaxel-induced apoptosis. Their immunohistochemical analysis showed a correlation between the expression levels of FOXM1 and stathmin in 103 postoperative specimens of gastric cancer. Li et al. (18) also found that, when FOXM1 inhibitor sulfur chain protein was used to reduce the expression of FOXM1, the resistance of gastric cancer to docetaxel was reversed, and FOXM1 and stathmin were downregulated. Therefore, FOXM1 can be used as a useful marker for predicting and monitoring docetaxel response. Furthermore, docetaxel resistance can be reversed by inhibiting FOXM1. FOXM1 may become a new therapeutic target for docetaxel-resistant gastric cancer. In other cancers, high expression of FOXM1 also leads to increased resistance to chemotherapeutic drugs. Wang et al. (19) found that FOXM1 expression was significantly correlated with cisplatin-based chemotherapy resistance and poor prognosis in patients with advanced non-small cell lung cancer. Lin et al. (20) indicated that FOXM1 participates in docetaxel resistance in castration-resistant prostate cancer by inducing AMPK/mTOR mediated autophagy. These findings support our findings. FOXM1 plays an oncogenic role in most cancers and is associated with chemoresistance. However, our study is limited to data analysis from public repositories and requires validation of experimental data in vivo and in vitro.

Reporting Checklist: The authors have completed the STREGA reporting checklist. Available at https://jgo.amegroups.com/article/view/10.21037/jgo-22-274/rc

Conflicts of Interest: All authors have completed the ICMJE uniform disclosure form (available at https://jgo.amegroups.com/article/view/10.21037/jgo-22-274/coif). The authors have no conflicts of interest to declare.