Dose modification and efficacy of nab-paclitaxel plus gemcitabine vs. gemcitabine for patients with metastatic pancreatic cancer: phase III MPACT trial

Pancreatic cancer is the fourth leading cause of cancer-related deaths in the United States and Europe (1,2). Surgical resection is the only curative approach for pancreatic cancer (3), but because symptoms are subtle or absent in early stages, the large majority of patients present with advanced nonresectable disease (1). Historically, the prognosis for patients with metastatic disease has been particularly poor (1). For example, treatment with the long-time standard of care, gemcitabine (Gem) monotherapy, led to median overall survival (OS) values of approximately 5 to 7 months in multiple phase III trials of patients with metastatic pancreatic cancer (4-16). However, two phase III trials have demonstrated clinically meaningful survival advantages for an experimental regimen over Gem monotherapy: the PRODIGE ACCORD 11 trial of 5-fluorouracil, leucovorin, irinotecan, and oxaliplatin (FOLFIRINOX) and the MPACT trial of nab-paclitaxel (nab-P) + Gem (17,18). To avoid toxicity with the per protocol FOLFIRINOX regimen, investigators have experimented with modification of starting components and doses; studies of modified FOLFIRINOX have demonstrated inconsistent efficacy results (19,20). The tolerability profile of nab-P + Gem allowed most doses of nab-P (71%) to be delivered at the per protocol level in the MPACT trial (18). However, little is known about how dose modifications may have affected treatment outcomes.

Dose reductions and delays are standard methods to reduce the toxic effects of chemotherapy, particularly myelosuppressive chemotherapy. A correlation has been noted between dose intensity and efficacy in some clinical trials (22,23). However, in ovarian cancer and non-small cell lung cancer, dose modifications of specific treatments had no impact on clinical outcomes (24,25). A post hoc analysis of a phase II trial of nab-P monotherapy in metastatic breast cancer also revealed no association of dose reduction with OS (26). Management of adverse events (AEs) by dose modification is suspected to increase the likelihood that a patient with pancreatic cancer can remain on treatment and consequently experience greater treatment exposure. However, there are few data to support this directly. Despite higher rates of dose reductions in the nab-P + Gem arm vs. the Gem arm in the MPACT trial, patients receiving nab-P + Gem had a longer treatment duration than those in the Gem-alone arm (median, 3.9 vs. 2.8 months). The goal of this exploratory analysis was to fully characterize the use of dose reduction or delay to manage toxicities and the effect of that dose modification on efficacy in the MPACT trial.

Patients and methods of the MPACT trial have been described previously, including a previous publication of a CONSORT diagram (18).

Patients were randomized 1:1 to receive a 30- to 40-minute intravenous infusion of nab-P 125 mg/m2, followed by an infusion of Gem 1,000 mg/m2 on days 1, 8, 15, 29, 36, and 43, or Gem alone 1,000 mg/m2 weekly for 7 of 8 weeks (cycle 1). Patients were treated on days 1, 8, and 15 every 28 days in subsequent cycles. Patient randomization was stratified by Karnofsky performance status, geographic region, and the presence of liver metastases. Treatment continued until either disease progression by RECIST or unacceptable toxicity.

Tumor response was assessed every 8 weeks, and scans were evaluated by an independent radiology laboratory and by investigators using RECIST version 1.0.

Treatment-related AEs were graded by the National Cancer Institute Common Terminology Criteria for Adverse Events version 3.0 (28). Hematologic AEs were assessed by central laboratory testing. All patients were evaluated on days 1, 8, and 15 of each 28-day cycle for AEs that would require dose modification. Per protocol, doses could be reduced up to 2 times per therapeutic agent (to 100 or 75 mg/m2 for nab-P and to 800 or 600 mg/m2 for Gem; dose reductions may or may not have been concomitant) in the event of unacceptable toxicity (Table 1, Table S1). Dose re-escalation was not allowed between cycles. Toxicities that required a delay of either drug for >21 days resulted in permanent discontinuation. 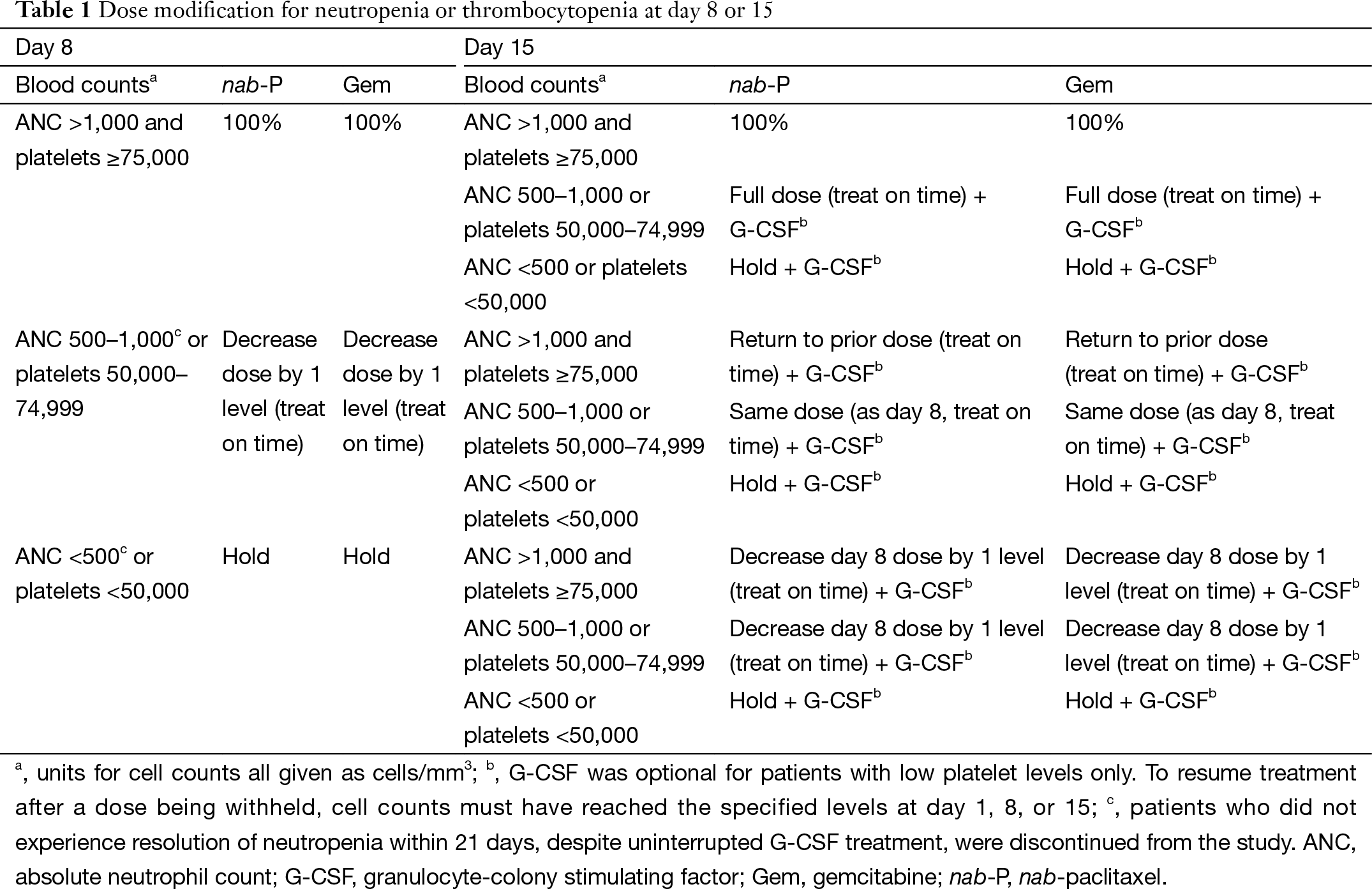 In all analyses, patients in the nab-P + Gem arm were designated as having had a dose reduction or delay based on modification of nab-P only. Doses not given within 2 days of the scheduled administration were considered dose delays. Reinitiation of treatment after a missed dose was required to be considered a delay.

All efficacy analyses were performed on the intent-to-treat (ITT) population, which was composed of all enrolled patients. The primary efficacy endpoint was OS, and the secondary endpoints were PFS and ORR. A multivariate analysis of OS was conducted that included the following covariates at baseline: age (<65 vs. ≥65 years), sex, KPS (70–80 vs. 90–100), geographic region (North America vs Eastern Europe, Western Europe, or Australia), pancreatic cancer primary location (head vs. other), presence of biliary stent, previous Whipple procedure, presence of liver metastases, presence of pulmonary metastases, peritoneal carcinomatosis, stage of diagnosis (IV vs. other), number of metastatic sites (1 vs. 2 vs. 3 vs. 4 vs. 5 vs. 6), and level of CA19-9 [< upper limit of normal (ULN) vs. ULN to 59× ULN vs. >59× ULN]. To assess the specific effect of each on OS, dose reduction (yes vs. no) and dose delay (yes vs. no) were added to the list of covariates, as was treatment group for the ITT analysis separately. Similar analyses were carried out within each treatment arm to account for the finding that more dose modifications were required in the nab-P + Gem arm vs. the Gem arm. Otherwise, the effect of each factor (treatment arm and dose modification) could have been canceled by the other since they were related.

The AEs that led to dose reduction of nab-P by treatment cycle are represented in Figure 1A. Neutropenia was the AE that led to the highest rate of dose reduction throughout treatment. The percentages of dose reductions of nab-P due to neutropenia and thrombocytopenia were 25% and 10%, respectively, in cycle 1 and 27% and 10%, respectively, over cycles 1 to 5. The rates of dose reductions of nab-P due to peripheral neuropathy increased from 4% in cycle 1 to 14% over cycles 1 to 5. As expected, the percentages of patients in each treatment arm who received full doses of each drug decreased with increasing numbers of cycles (Figure 1B). 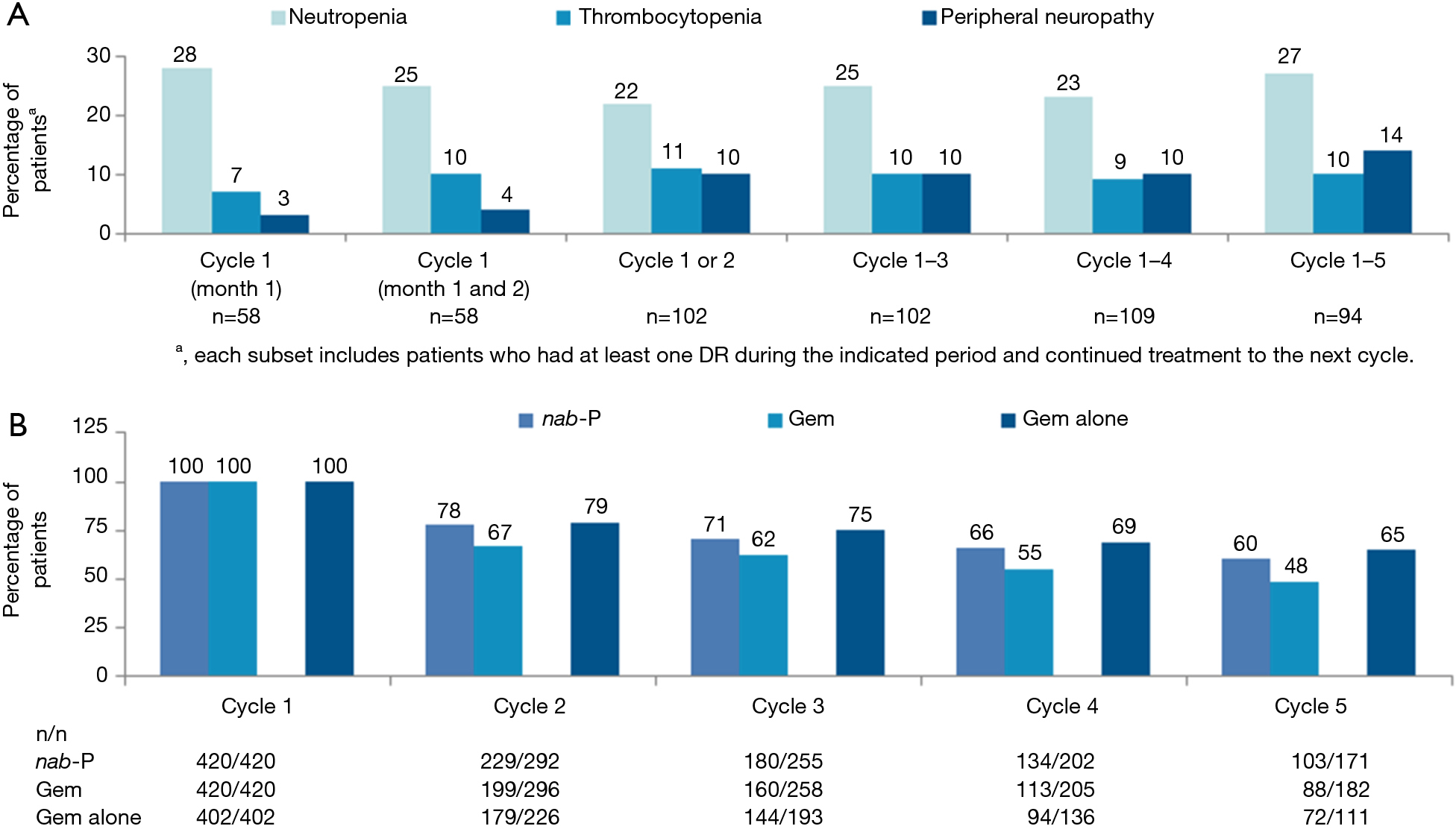 Treatment exposure based on dose modifications

To determine whether potential markers of frailty might associate with treatment exposure in this trial, the rates of dose reduction were examined in subsets of patients categorized by age and performance status. Neither of these factors appeared to influence the rate of dose reduction in either treatment arm (Table 3). In addition, the baseline characteristics for each treatment arm appeared similar between the ITT population and the patients who underwent dose reductions or delays (Table S2). 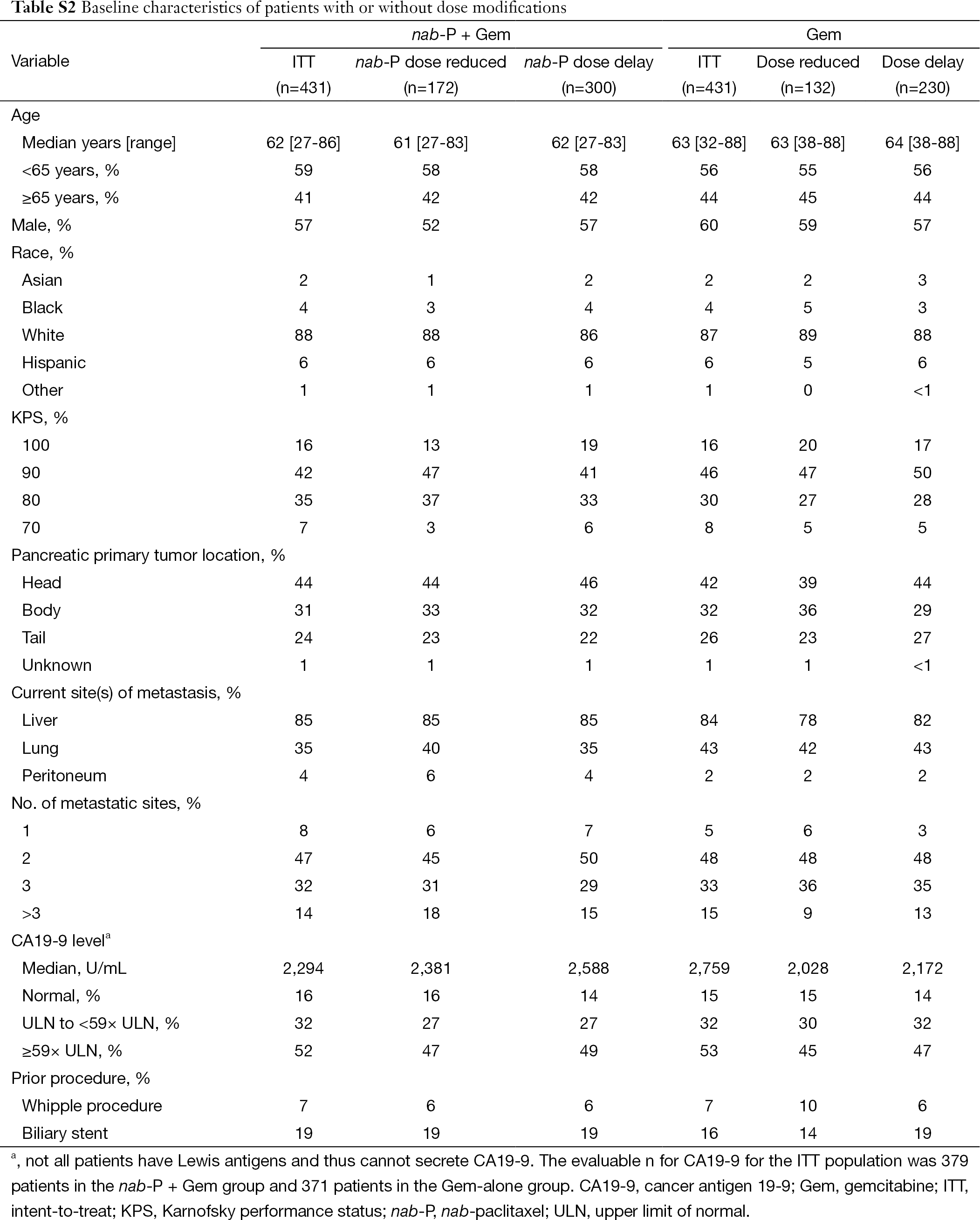 In the nab-P + Gem arm, patients who underwent dose reductions or delays of nab-P had a greater extent of treatment exposure than those who did not in terms of treatment duration, number of cycles administered, and cumulative dose of nab-P delivered (Table 4). Similar trends were observed for Gem in the Gem-alone arm. Rates of subsequent therapies appeared to be similar for patients who did or did not undergo a dose modification (Table 4).

Effect of dose modification on efficacy 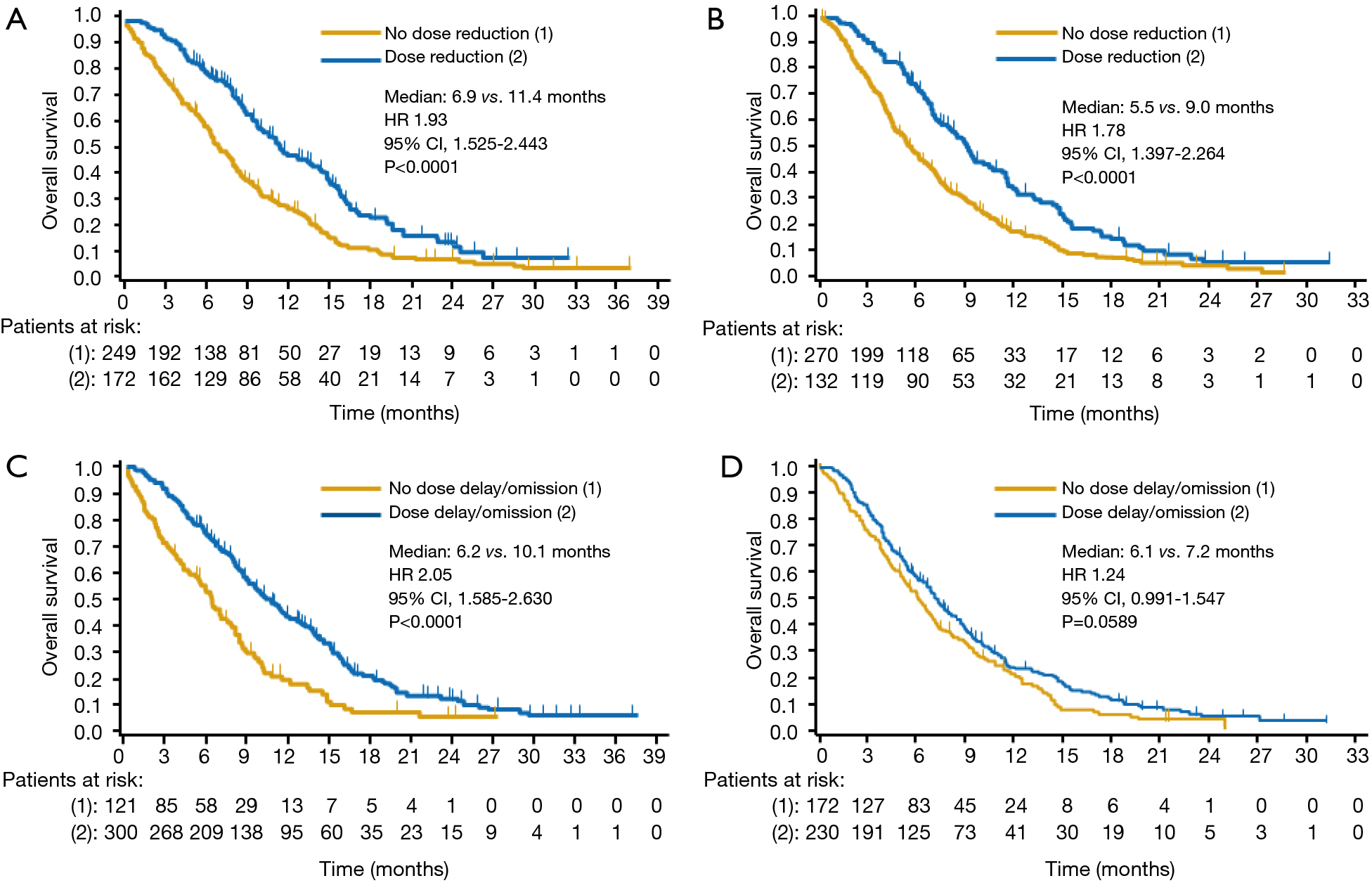 A stepwise multivariate analysis of OS was performed, which included a number of baseline factors as well as treatment group, dose reduction, and dose delay. Both dose reduction (HR, 0.61; P<0.001) and dose delay (HR, 0.77; P=0.007) were significantly associated with longer OS (Table S3). Treatment group, KPS, and presence of liver metastases were also significant predictors, as shown in a prior analysis (29), as was number of metastatic sites. Separate multivariate analyses were performed within each treatment arm to account for the statistical issue of higher rates of dose modifications in the nab-P + Gem arm (Table S3); dose reduction remained significantly associated with longer OS in each treatment arm, whereas dose delay was only significant in the nab-P + Gem arm (P=0.055 for the Gem arm). 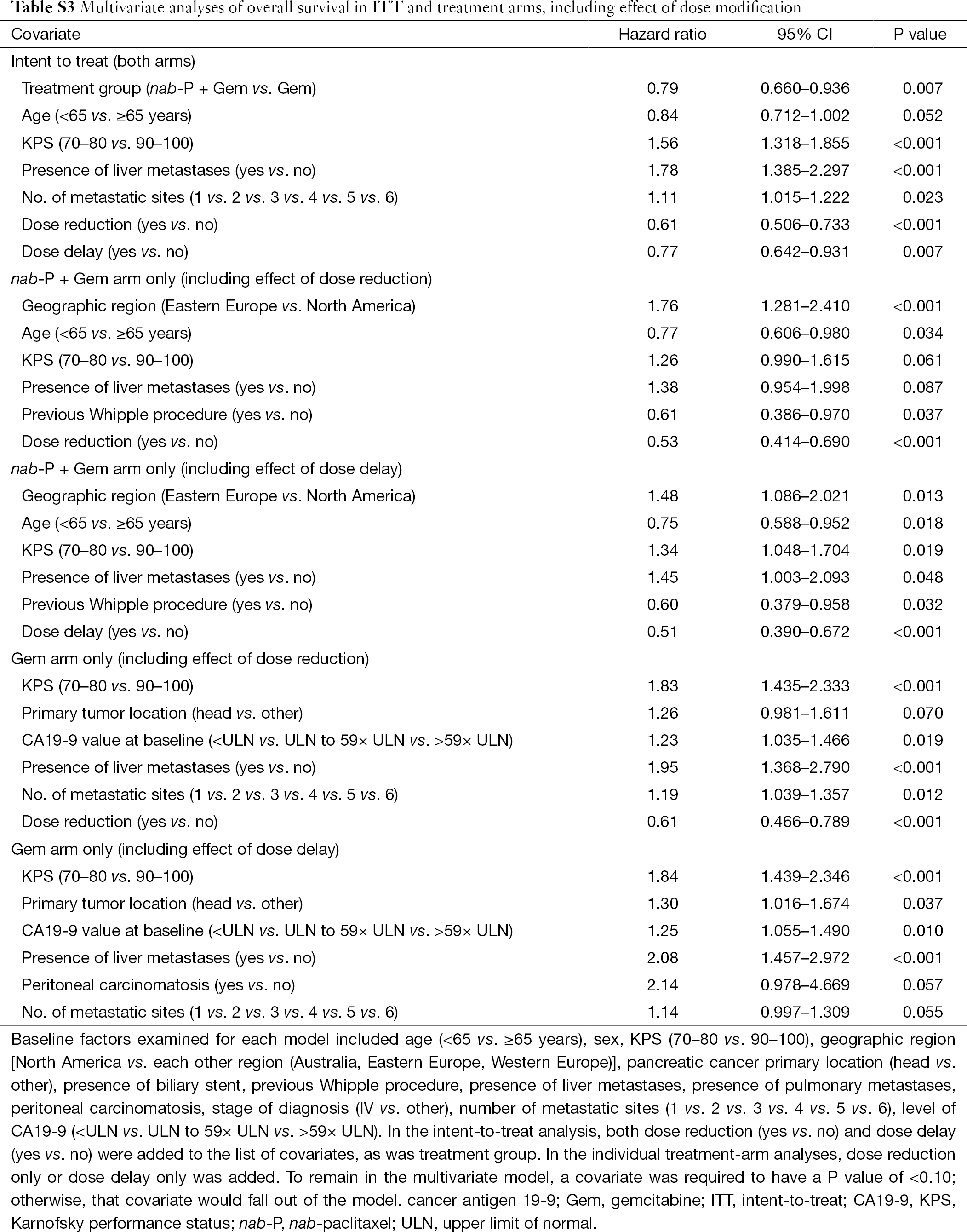 The MPACT trial established nab-P 125 mg/m2 + Gem 1,000 mg/m2 as a new standard therapy for advanced pancreatic cancer (3,18), but very little published information is available on the efficacy of the regimen after dose modification. In the nab-P + Gem arm, at least 1 nab-P dose modification was associated with longer OS and most dose modifications occurred after the second cycle (i.e., 3 months of treatment). Together, this suggests that the regimen with the starting dose of nab-P 125 mg/m2 + Gem 1,000 mg/m2 was feasible and dose modifications to alleviate toxicities were not detrimental. Most patients (60%) with a nab-P dose reduction had only 1 dose reduction, and 54% of patients with a nab-P dose delay had 1 or 2 dose delays during treatment. The longer median duration of treatment in the nab-P + Gem vs. Gem arm (3.9 vs. 2.8 months) (18) likely reflects the improved efficacy of the combination and resulted in a higher proportion of patients in the nab-P + Gem arm requiring dose modification compared with the Gem-alone arm.

The AEs that led to the majority of dose modifications in the nab-P + Gem arm were neutropenia, thrombocytopenia, peripheral neuropathy, and fatigue. Although neutropenia and thrombocytopenia led to reductions of both drugs, peripheral neuropathy was responsible for nab-P reduction in 6% of patients and dose delay in 8% of patients in that arm but no dose reductions in the Gem-alone arm.

The reasons for the apparent link between efficacy and dose modification are not immediately clear. One possible explanation is that some patients may be inherently more sensitive to the drugs than others, potentially leading to increased efficacy, more prolonged exposure, and increased chance of experiencing a toxicity requiring dose modification. An alternative possibility is that dose modification in response to a toxicity may have allowed patients to receive greater treatment exposure (more cycles and higher cumulative dose) and that this greater exposure resulted in better clinical outcomes. Although the available data do not allow a definitive explanation for the association of dose modification with efficacy, a number of analyses presented here minimize the likelihood that the link is an artifact attributable to the presumed lower rate of dose modification among patients with early disease progression or death.

Although we are not aware of any studies in pancreatic cancer that have demonstrated a link between dose modification and better efficacy, associations have been observed between efficacy and the development of rash in patients treated with erlotinib for pancreatic cancer or non-small cell lung cancer (30). In pancreatic cancer, the presence of grade ≥2 rash was significantly associated with longer OS (HR, 0.47; 95% CI, 0.34–0.64; P<0.001) and PFS (HR, 0.46; 95% CI, 0.33–0.65; P<0.001). Also, in the adjuvant treatment of stage III colon cancer, an association was reported between a capecitabine-specific adverse reaction and long-term efficacy (31). A post hoc analysis of data from the X-ACT trial demonstrated that capecitabine-treated patients who developed hand-foot syndrome had higher 5-year disease-free and OS rates compared with patients who did not develop the syndrome (61.3% vs. 55.5% and 73.8% vs. 66.3%, respectively).

The MPACT trial has firmly established nab-P 125 mg/m2 + Gem 1,000 mg/m2 the first 3 of 4 weeks as a novel, effective, and fairly well tolerated treatment option in patients with metastatic pancreatic cancer. Based on the present data investigating the use of dose reduction and/or delay of chemotherapeutic drugs to manage toxicities, as well as the effect of dose modification on efficacy, the following conclusions can be drawn: (I) there is a need to carefully monitor patients for neutropenia, thrombocytopenia, peripheral neuropathy, and fatigue; (II) the methods of dose modification outlined in the trial protocol were effective and should be followed in routine clinical practice; (III) these dose adjustments can be carried out with the knowledge that they do not reduce the efficacy of the established 125 mg/m2 starting nab-P dose. Our data highlight the importance of titrating the dose of chemotherapeutic drugs to the individual patient, a strategy that, according to this exploratory analysis, seems to result in an optimal therapeutic outcome.

Disclaimer: The authors were fully responsible for all content and editorial decisions for this manuscript.