In recent years, 28.7% of the Japanese population has reached over 65 years old, and the average life expectancy of male has increased to 81.4 years old and that of female to 87.5 years old (1). Of note, the number of cases of colorectal cancer surgery in older adults over 80 years old, which ranked the second for both men and women, has steadily been increasing for both men and women. In terms of the surgical procedure used, according to a survey of the nationally registered facilities of the Japanese Society of Endoscopic Surgery, the ratio of laparoscopic colorectal cancer surgery at registered hospitals exceeds about 70%, while elective laparotomy is about 30% (2). However, these results do not include non-registered facilities, and it is estimated that 50–60% of all surgical cases nationwide are laparoscopic, including surgery in older adults. However, to the best of our knowledge, no detailed data are available. In general, laparoscopic surgery (LAP) using multi-ports has low invasiveness. In addition, the amount of blood loss is smaller, and the duration of hospital stay is shorter. Despite these significant advantages, there are several disadvantages such as longer duration of surgery, longer portal-to-portal time of anesthesiologists and surgical staff, and higher medical expenses. In addition, in surgery for older adults with colorectal cancer who have increased cardiopulmonary comorbidities, it is still unknown whether minimally invasive surgery by multi-ports is the best option. To date, reports of older adults with colon cancer who underwent LAP demonstrate the following advantages versus conventional laparotomy (CL): less bleeding, decreased incidence of surgical wound infection and intestinal obstruction, fewer postoperative complications, shorter hospital stay, and early oral intake. However, there are some disadvantages including perioperative complications due to longer operation times, which also burden the cardiopulmonary system. Therefore, conducting LAP should be considered carefully. (3-7) Considering the above, we conducted a study to compare various clinical outcomes of older adult patients over 80 years old with colorectal cancer at our hospital, focusing on surgical outcomes. We present the following article in accordance with the STROBE reporting checklist (available at https://jgo.amegroups.com/article/view/10.21037/jgo-21-838/rc).

From 2004 to 2014, 821 patients with colorectal cancer underwent resection of the primary lesion at the department of surgery, Tokai University Hachioji hospital. Of these, 102 patients (12.4%) were older adults over 80 years old. We conducted a retrospective review of these 102 patients’ data in the electronic medical records. We classified the two groups into CL group (72 patients) and hand-assisted laparoscopic surgery (HALS) group (30 patients) according to the surgical technique, and compared between the two groups. The primary endpoint was overall survival, and the secondary endpoints were recurrence-free survival, blood loss, postoperative hospital stay, and postoperative complications.

Regarding preoperative risk, we evaluated low ejection of cardiac function risk as < ejection fraction of 55% (EF55%), obstructive of lung function risk as forced expiratory volume % in 1 second (FEV1.0) <70%, restrictive as % vital capacity (%VC) <80%, and mixed as FEV1.0 <70% and %VC <80%. Performance status (PS) was evaluated using the Common Toxicity Criteria, Version 2.0 [Japan Clinical Oncology Group (JCOG)]. The diagnosis of primary colorectal cancer was made by histopathological examination of resected specimens at the time of surgery. Pathological classification stage (pStage) was determined according to the criteria of the 8th edition of the Japanese classification of colorectal carcinoma (8), and metastasis to the liver or lung was diagnosed by ultrasound (US), computed tomography (CT), or magnetic resonance imaging (MRI) imaging. The follow-up period was 5 years from the time after surgery, and the presence of recurrence or progression was evaluated by US or CT images every 3 to 4 months. Relapse-free survival was defined as the time after surgery until the appearance of the first recurrence of cancer, or death from any cause, and overall survival was defined as the time after surgery until death from any cause. Delirium was diagnosed using the American Psychiatric Association’s Diagnostic Criteria [Diagnostic and Statistical Manual of Mental Disorders, Fifth Edition (DSM-5)] (9), and cases requiring medication or severe trunk suppression were considered severe. The cause of death was determined by the International Classification of Diseases, 10th revision (ICD-10) (10).

A comparison was made between the two groups using the survival curve estimated by the Kaplan-Meier method. The differences in survival, and hazard ration and the 95% confidence interval were evaluated with the Cox proportional hazards regression model. For patient demography of the CL group and the HALS group, age, operation time, amount of blood loss, and hospital stay period after surgery were tested by the Mann-Whitney’s U test with non-parametric assumption. Gender, tumor location, pStage, pre-operative cardiac function risk, pre-operative lung function risk, PS, presence or absence of treated with postoperative chemotherapy, postoperative complications, and delirium were analyzed by χ2 test or Fisher’s exact probability test. In all tests, P<0.05 was considered statistically significant.

This study was conducted in accordance with the Declaration of Helsinki (as revised in 2013). This study was approved by the research and study program of Tokai University Educational System General Research Organization (approval No. 19R-216) and written informed consent for publication of the present study was obtained from the patients and/or family members. 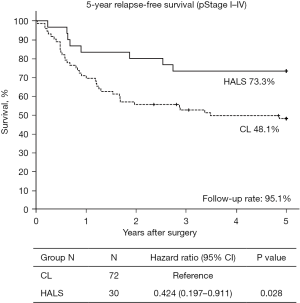 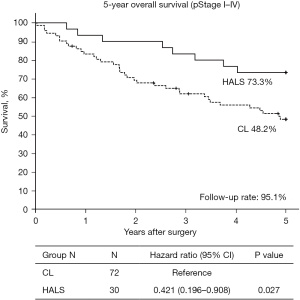 With an increase of the older adult population and an enhancement of longevity in Japan, an increasing number of studies report the treatment of older adult patients with colorectal cancer (11). In the past, chemotherapy and surgical intervention were not actively recommended for older adult patients in Japan. However, with advancements in the perioperative surgical management, limiting treatment options based solely on age is no longer considered (12). Furthermore, mental age may not correspond to physical organ age, and variations between patients exist. As such, the treatment decision now considers the PS, patient’s wishes and expectations, and the family value system (11,12). However, patients with postoperative complications are reported to have poor prognosis and a lower survival rate. Therefore, it is apparent that perioperative management should carefully be evaluated for each patient to ensure surgical safety. Complete resection (endoscopic, laparotomy) remains the treatment of choice for colorectal cancer. Even for older adult patients over 80 years old, a surgical resection option should be explored as much as possible. Several studies report outcomes of LAP for older adult patients with colorectal cancer, such as decreased surgical invasion and surgical field infection, with advantages in older adult patients comparable to those observed in younger patients (3-7). However, there is no study that demonstrates significant differences in long-term outcomes and mortality rates between LAP and laparotomy. Although, shorter duration of hospital stay and time to oral intake have been reported (7). Although LAP has become popular in recent years, its application and outcomes warrant additional consideration, including various risks that may arise from longer operation times and increased medical costs. Hence, studies including a larger number of patients are needed, and the best operative approach or technique should be determined for older adult patients with colorectal cancer.

We have serially reported the usefulness of HALS, a hybrid procedure of CL and LAP, since 2006. The results of our multiple studies showed that both short-term and long-term outcomes were comparable between HALS and CL (13,14). In addition, we reported other advantages of HALS, including minimum surgical invasiveness due to small incision, decreased incidence of operative site infection, shorter postoperative hospital stay period, and surgical technique with 2–3 ports, as well as medical costs (13-17). This time, we also investigate the causes of death. Although death due to other diseases appears to be more frequent in the CL group, death due to the primary disease was comparable between the CL group and the HALS group. However, only a very limited number of studies compared HALS versus LAP, and it is reported that operation duration is shorter in cancer surgery. Hagiwara et al. compared hand-assisted laparoscopic distal gastrectomy (HALDG) versus laparoscopic-assisted distal gastrectomy (LADG) in patients with stage I gastric cancer and reported that although operation time was significantly shorter in HALDG, the amount of blood loss was larger in HALDG (18). However, because the reconstruction method is similar to that of laparotomy, the time to acquire surgical technique is shorter, and the surgeon’s stress is expected to be decreased. Considering the short-term prognosis, it is reported to be comparable to that of LADG. Thus, as with this study, their study also indicated its usefulness in older adult and high-risk patients. There are also reports that HALS can provide short- and long-term prognosis comparable to LAP in colorectal cancer, and is expected to provide short proficiency and easy education (19).

Compared to LAP, HALS has the advantages of fewer human resources, shorter operation time, and a smaller learning curve. Moreover, it also is considered suitable for patients with intestinal obstruction and emergency or sub-emergency colorectal cancer surgery. This study compared HALS (the standard LAP at our hospital) versus CL, and, as with previous reports (13,14,19), HALS demonstrated sizable significant advantages in terms of blood loss, hospital stay period, and wound infection. A longer operation time is often suggested for LAP, but this was not observed HALS in this study. Additionally, concerning long-term outcome, the 5Y-RFS/5Y-OS (the CL group/the HALS group) was 48.1%/73.3% (P=0.028) and 48.2%/73.3% (P=0.027), respectively; and the HALS group was significantly better. The JCOG0404 study (20) did not prove the non-inferiority of laparoscopy to open surgery, but it did show a decrease in complications, length of hospital stay, and blood loss. There is a report that less postoperative complications affect the difference in survival rate (21), and in this study, age and postoperative complications may have affected the survival rate. HALS may be a surgical technique that incorporates the advantages of both CL and LAP, and although a comparative study of the three surgical techniques is needed in the future, HALS is considered to be useful for patients over 80 years old.

If the operation time is comparable to the CL, cardiovascular stress is considered within the permitted range. In the HALS group, fluctuations of circulatory dynamics due to excessive head-down during the operation were observed in 30 patients (10%). Once notified by the anesthesiologist, head-down was corrected, and such fluctuations were improved during operation (data not shown). Furthermore, postoperative delirium/transitional syndrome occurred in 25/72 patients (34.7%) in the CL group and 7/30 patients (23.3%) in the HALS group; however, no significant difference was observed between groups (P=0.508). Severe cases occurred in 6/72 patients (8.3%) in the CL group, while in only 1/30 patients (3.3%) in the HALS group. All cases were temporary or transient reversible phenomena, and were improved by conservative management. Accordingly, as postoperative PS was relatively favorable, HALS as a low invasive intervention could proactively be considered to patients whose cardiac and lung function risk is low.

Approximately 70% of surgical treatment for patients over 80 years old with colorectal cancer was performed by CL from 2004 to 2014. However, HALS had significant advantages with less blood loss, shorter hospital stays, and fewer wound infections. HALS could proactively be considered to older adult patients whose cardiac and lung function risk is low.

The authors are grateful to Kyoko Kishima for the statistical analysis.

Reporting Checklist: The authors have completed the STROBE reporting checklist. Available at https://jgo.amegroups.com/article/view/10.21037/jgo-21-838/rc

Conflicts of Interest: All authors have completed the ICMJE uniform disclosure form (available at https://jgo.amegroups.com/article/view/10.21037/jgo-21-838/coif). The authors have no conflicts of interest to declare.

Ethical Statement: The authors are accountable for all aspects of the work in ensuring that questions related to the accuracy or integrity of any part of the work are appropriately investigated and resolved. This study was conducted in accordance with the Declaration of Helsinki (as revised in 2013). This study was approved by the research and study program of Tokai University Educational System General Research Organization (approval No. 19R-216) and written informed consent for publication of the present study was obtained from the patients and/or family members.