Pancreatic cancer remains a highly lethal malignancy despite advances in treatment. In 2009 there were 42,470 new cases of pancreatic cancer and 35,240 deaths from the disease (1). At initial diagnosis, 50% of patients present with metastatic disease, 30% present with a locally advanced tumor, and only 20% are resectable. Surgical resection remains the only potentially curative therapy. The large number of recurrences and/or distant failures following resection suggest that microscopic metastases continue to be an obstacle to better outcomes. Patterns of spread include direct extension, lymphatic spread to regional lymph nodes, and hematogenous spread to distant sites. For all stages, the 1- and 5-year survival rates are 25% and 6%, respectively. Even for patients diagnosed with localized disease, the 5-year survival rate is only 22% (2).

Treatment of locally advanced unresectable pancreatic cancer (LAPC) has evolved to consist of chemotherapy alone or in combination with radiation, in hopes of achieving better survival. Although the reported benefits of chemoradiation (CRT) are controversial, it remains a management option for patients with LAPC. The survival advantage to a chemoradiation approach has not been consistently demonstrated (3) and there are few randomized phase III studies evaluating the role of combined modality therapy in recent years (4-10). There is thus a need to further examine the role of chemoradiation in LAPC.

In this study, we retrospectively analyzed the results of patients with LAPC treated with either CRT or chemotherapy alone over the past decade.

Between December 1998 and October 2009, 253 patients with pancreatic adenocarcinoma were identified. Of these, 159 underwent treatment with CRT or chemotherapy alone. Patients with metastatic disease at presentation and those that underwent surgery for definitive resection were excluded from analysis, as were patients with islet-cell tumors and mucinous cystadenocarcinoma. The remaining 116 patients formed the study population for this Institutional Review Board-approved retrospective analysis. Baseline patient and tumor characteristics were reviewed, including age, gender, race, weight loss >10%, Eastern Cooperative Oncology Group performance status, tumor diameter (mm), tumor location, T stage, nodal status, histologic grade, and non-obstructive pre-treatment CA 19-9 levels when available. Stage was determined according to the American Joint Committee on Cancer staging system, 6th edition (11). Patient data were obtained through the tumor registry and review of medical records.

Referral for chemoradiation was done at the discretion of the attending surgeon and/or medical oncologist after multidisciplinary discussion. Chemoradiation was offered primarily to patients with T3 or higher disease and/or with nodal involvement. These patients were deemed unresectable based on radiographic imaging, surgical consultation, and multidisciplinary consensus. 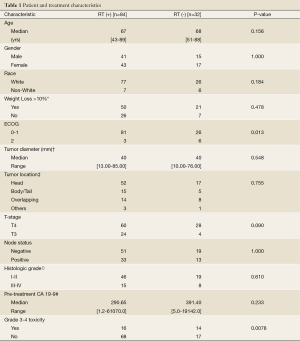 With a median follow-up of 11 months (range, 1.6-59.4 months), local recurrences and/or distant metastasis were observed in 53% of patients. The majority (92%) had distant metastatic disease. The most frequent site of distant metastasis was the liver (47%). Detailed patterns of failure by treatment modality are shown in Table 2.

Table 2 Patterns of failure according to treatment modality
Full table

Univariate analysis showed that grade 3-4 toxicity was an adverse prognostic factor affecting PFS and OS. Other patient and treatment factors including age, tumor size, T stage, nodal status, histologic grade, pre-treatment CA 19-9, chemotherapy regimen, and the use of RT were also analyzed and are summarized in Table 3. 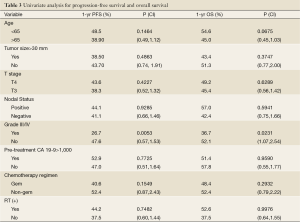 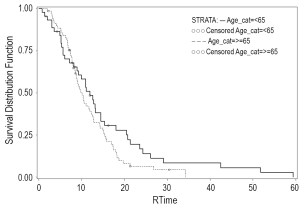 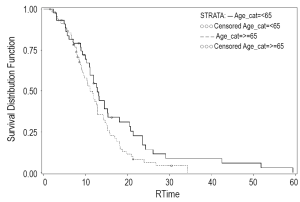 The role of combined therapy for LAPC continues to evolve. The goals of radiotherapy in LAPC include improvement in local control and palliation of pain and/or obstructive symptoms. Trials of chemoradiation versus chemotherapy alone in LAPC have reported mixed findings regarding survival and are summarized in Table 4 (4-6,9,10). In a trial conducted by the Gastrointestinal Tumor Study Group (5), the effect of concurrent chemoradiotherapy versus chemotherapy alone in LAPC was evaluated and a benefit in survival from combined modality therapy was noted. The chemoradiation arm consisted of radiation combined with 5-fluorouracil to a total dose of 54 Gy in 1.8 Gy fractions followed by maintenance streptozocin, mitomycin and 5-fluorouracil (SMF). The chemotherapy-only arm was SMF combination chemotherapy for two years or until progression. In this trial, the one-year OS was 41% in the chemoradiation arm compared to 19% in the chemotherapy-alone arm (P<0.02). 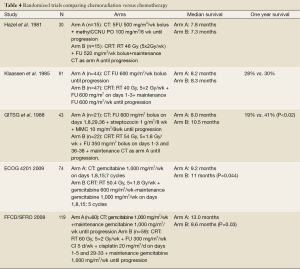 In a second recent study by Chauffert et al. reported in 2008 (10), chemoradiation was delivered to a total dose of 60 Gy concurrently with cisplatin (20 mg/m2/day, days 1-5 during weeks 1 and 5) and 5-fluorouracil (300 mg/m2/day, days 1-5 for 6 weeks). The chemotherapy-alone arm consisted of gemcitabine (1,000 mg/m2 weekly for 7 weeks). Maintenance gemcitabine (1,000 mg/m2 weekly, 3/4 weeks) was given in both arms until disease progression or toxicity. Overall survival in this trial was shorter in the chemoradiotherapy arm (13.0 vs. 8.6 months, P=0.044) and these patients experienced a higher rate of grade 3-4 toxicity compared with the chemotherapy arm (66% vs. 40% respectively; P=0.0008). A potential explanation for increased toxicity is the combination of aggressive chemotherapy delivered with concurrent radiation (60 Gy concurrent with cisplatin followed by high-dose weekly maintenance gemcitabine). Due to inferior survival in the chemoradiation arm, this study was stopped prior to planned enrollment. However, it adds to the growing body of opinion that the benefit of chemoradiation for LAPC is likely confined to a carefully selected group of patients.

We observed prolonged median survival, from 9 to 12 months, in the RT (+) group. Although not statistically significant, our limited sample size precluded our ability to detect such a difference. Retrospective power analysis revealed that it would require more than 500 patients to detect the difference between the 9 and 12 month median survival observed in the RT (-) and RT (+) groups respectively with 80% power. Excluding the study of Chauffert et al., phase II and III multi-institutional data have reported similar survival results for patients with LAPC treated with chemotherapy (range, 9.1-9.0 months) (4,14,15) and chemoradiation (range, 11.0-11.9 months) (4,16,17).

Comparison of patient characteristics between each treatment modality group [RT (+) and RT (-) groups] using the Fisher’s exact test revealed that some of the potential prognostic factors were not evenly distributed between the groups. Patients in the RT (-) group were more likely to have co-morbidities and poor performance status than those in the RT (+) group. Therefore, these patients were less likely to be selected for chemoradiation. We observed that the patients in the RT (+) experienced fewer grade 3/4 toxicities from treatment than did historical controls. Univariate analysis of patient characteristics showed that a reduced frequency of grade 3/4 toxicity predicted for improved PFS and one-year OS.

Our data suggest that chemoradiation can be delivered safely and that acceptable toxicity is achievable with strict quality assurance, multidisciplinary management, and appropriate patient selection. It also highlights the need for a consistent approach to modern radiotherapy in an anatomic region with unique planning considerations, to avoid overdosing the neighboring radiosensitive organs reported by our group previously (18-21). CT simulation and three-dimensional conformal treatment planning was used in our study. Radiotherapy up to 54 Gy was delivered over a period of 5-7 weeks using standard fractionation. No planned treatment break or altered fractionation schemes were used. Potential detrimental effects of treatment interruptions and lack of effective systemic effect during a protracted radiation course on tumor control has led to the investigation of altered fractionation schemes, including shorter courses of high-dose radiotherapy using image guidance, as well as more conformal techniques (22-27). This is an area under active investigation and needs to be tested in a randomized setting (23,24,28,29).

Although local control rates have been improved by innovations in radiation therapy, systemic failure remains a major obstacle in improving survival. In our patterns of failure analysis, we found that the majority of treatment failures in both groups occurred at distant sites. The proportion of patients with a component of distant metastasis in the RT (+) group was 92% (46 of 50) and it was 91% (10 of 11) in the RT (-) group. The need for more effective chemotherapy is suggested by the high rate of distant metastasis in the RT (+) and RT (-) groups as shown in Table 2.

Over the last 10 years, gemcitabine alone and in combination has evolved as a standard of chemotherapy in LAPC (30,31). In more recent phase I/II studies, concurrent gemcitabine with radiation has shown promise in the treatment of locally advanced unresectable disease with manageable toxicity (32-40). In some of these trials, radiation targets included elective coverage of draining lymphatics, resulting in large treatment volumes that may have contributed to the increased toxicity that was described. Conformal radiation fields combined with newer systemic agents may help to reduce toxicity of treatment. More recently, biologic agents such as erlotinib have been tested in combination with gemcitabine, with varying success (7,14,41). There is a need for clinical trials using newer systemic agents and molecular targets to evaluate their efficacy in reducing the incidence of distant metastases.

Our study is limited by its retrospective nature, small sample size, and lack of data regarding quality of life. Many of the cited studies in this patient population have not incorporated assessments of quality of life, improvement in performance status, and palliation of symptoms (4-6,9,10). These endpoints are important to consider in patients with limited survival and marginal performance status who are at increased risk for toxicity from chemoradiation. In 2002, a study in Japan looked at combined-modality therapy versus best supportive care and found that locally advanced patients who underwent treatment derived benefit in quality of life as measured by a maintained performance status (42).

An attractive strategy to facilitate patient selection for CRT is through a trial of upfront systemic therapy followed by re-assessment. Radiotherapy may offer a survival benefit in patients with disease that proves to be localized after a period of time. Many patients will progress during induction chemotherapy and may be spared the added toxicity of combined-modality therapy.

In addition to appropriate patient selection, a more effective surrogate marker is needed to identify those patients most likely to benefit from additional therapy. CA19-9 is the most commonly used tumor marker in patients with pancreatic cancer. Occult metastatic disease may be suggested by rising tumor markers such as CA 19-9 during the induction period. Perioperative CA 19-9 levels have been shown to be prognostic in patients with resectable disease (44); CA 19-9 is a useful marker to incorporate into decisions regarding adjuvant therapy. Similarly, recent studies have shown that the peri-chemoradiation serum CA 19-9 level is an independent predictor of recurrence and survival after chemoradiation in LAPC (45,46).

The authors would like to thank William Preston, Ed.D for his assistance with manuscript preparation.