In the United States, colorectal cancer (CRC) is the third most common incident cancer and the third highest cause of cancer death for both men and women (1). When CRC is diagnosed at an early stage, the 5-year relative survival is 90.4%, but for patients with metastatic disease, 5-year survival is only 11.6% (2). Factors associated with stage at presentation and survival include race (3), gender (3), socioeconomic status (SES) (4,5), and molecular abnormalities, such as abnormal expression of p53 (6). Although SES has emerged as an important factor relating to CRC, the mechanism through which it affects survival has not been elucidated. There is a need to identify genetic factors that contribute to SES differences and to progression of CRCs.

Genetic alterations, including those in the p53 gene, occur during the development of CRCs (7). Patients whose CRCs exhibit nuclear accumulation of p53 (p53nac) have decreased survival after resection, and p53nac may be a useful prognostic factor (8,9). Although patient race/ethnicity and SES are related, they do not measure the same construct (10). Therefore, it is important to determine if SES and race are associated with p53nac. Environmental factors associated with SES may be related to the genetic alterations in carcinogenesis. For women with breast cancer, p53 mutations were associated with SES and may have an association with the poorer prognosis of women of low SES (11). Thus, there is a need to identify the genetic factors that contribute to SES differences and progression of CRCs. This study aimed to evaluate the association between measures of SES, including health insurance and employment status, and p53nac among a cohort of patients with CRC.

An existing database for a cohort of patients (N=1,135) who received curative or palliative resection for sporadic CRC at the University of Alabama at Birmingham from 1981 to 2002 was utilized for this study. This investigation, which was approved by the Institutional Review Board at the University of Alabama at Birmingham, did not require informed consent. The data were obtained from medical records, physician charts, and surgical pathology and radiology reports. For a subset of patients, archival tissues were obtained and evaluated for p53nac status (N=590). Only patients with data on both SES and p53nac status were included for this analysis (N=249).

Measures of SES (employment status; and Medicaid, Medicare and/or private insurance coverage) were abstracted from physician charts and medical records. Patients who were specified as “none” for employment were categorized as unemployed and those who gave any other response (including “unknown”) as employed. Because people under the age of 65 typically receive Medicare benefits only if they have a disability or end-stage disease, a dichotomous variable for Medicare status was created as a proxy for disability for such patients. Medicare coverage was not included among all age groups; it is typically available irrespective of SES after the age of 65. Information on insurance coverage was categorized as ‘yes’ or ‘no’ for Medicaid, Medicare due to disability, and private insurance.

Evaluation of nuclear accumulation of p53

For a series of consecutive CRC patients, the phenotypic expression of p53 (p53nac) in CRCs was determined by immunohistochemistry (IHC). As described previously (8,9), only tumor cells with distinct nuclear immunostaining for p53nac were considered positive, and the tumor was considered positive only if p53nac was identified in 10% or more of all malignant cells in a tissue section. The cut-off value of 10% positivity was chosen because it showed the highest concordance between p53nac and point mutations of the p53 gene, as detected by single-strand conformational polymorphism analysis (95% of point mutations) (12).

Other covariates of interest

Due to the small number of patients, only major prognostic factors (age, sex, race, and tumor stage) were included. Age at the time of surgery was included as a continuous variable (range, 26-93 years). Patients were categorized as white (non-Hispanic Caucasian) or black (non-Hispanic African-American) based on the race listed in the medical record. Tumor stage was categorized using the TNM system as Stages I, II, III, or IV according to the criteria of the American Joint Committee on Cancer (13).

Descriptive statistics were presented according to p53 status. Chi-square tests for categorical variables and t-tests for continuous variables were used to compare demographic and clinical characteristics. Logistic regression was used to calculate odds ratios (OR) along with 95% confidence intervals (CI) for the association between measures of SES and p53 status. Unadjusted models and models adjusted for all covariates of interest were developed. A two-sided probability of 0.05 was considered statistically significant. 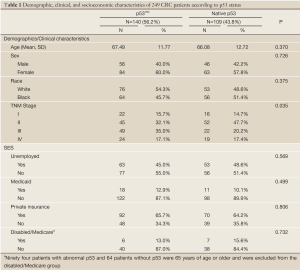 Although the unadjusted and adjusted estimates for the association between the measures of SES with p53nac were not statistically significant, a weak association was detected among Medicaid recipients. Patients of low SES may experience different exposures (e.g., diet, infections, air quality, and other environmental exposures) that lead to abnormal p53. Patients with Medicaid coverage may be most representative of low SES patients since Medicaid is typically provided only to low income individuals and families. For patients with Medicaid coverage, the odds of having p53nac were 1.28 times greater than for patients without Medicaid. This positive association supports our hypothesis that low SES patients have higher odds of p53 abnormalities. The finding, however, was not statistically significant.

The other potential measures of SES did not support our hypothesis, but this may be due to limitations in obtaining SES information from medical records. Information on employment was available only in the medical records of individuals, and, since a higher proportion of patients considered unemployed were females and older, these patients may have either had an employed spouse or have been retired and receiving retirement benefits. Therefore, unemployment as measured in this study may not have been a reliable indicator of low SES. For private insurance, actual rates of coverage vary substantially across plans, with variations in both employer and employee premium contributions and in cost-sharing amounts (14). Therefore, having private health insurance coverage may not directly correlate with SES, as patients could be underinsured or unable to pay the cost-sharing for some procedures. Similarly, patients who receive Medicare prior to retirement were likely previously employed, so it is possible that this group was not of low SES prior to the disability and therefore did not experience the same past exposures as did other low SES patients.

Most of the alterations in the p53 gene are point (missense) mutations, which lead to altered forms of the p53 protein. These mutant forms generally have a longer half-life than native (wild-type, wt) p53 and can be detected by routine IHC. p53 nuclear accumulation (p53nac) is not necessarily due to p53 gene mutations, it may also be due to formation of complexes between wt-p53 and other nuclear proteins (e.g., the large T antigen), viral proteins (e.g., SV40), or the major heat shock proteins (hsc-70, 72, and 73) (15). Such complexes could be the basis for the existence of nonfunctional p53 (16). In our earlier studies (12,17), without use of an antigen recovery (AR) procedure (boiling the tissues in microwave), we demonstrated that, for CRCs (n=107), the IHC technique identified 95% of missense point mutations in p53, using a 10% staining cutoff for p53nac. When this cut-off value was used, <10% of CRCs exhibited p53nac without a point mutation in the p53 gene (12). Furthermore, p53nac was used to assess the prognoses for CRC patients (8,9,18). Since the data presented in current study were generated following the above described conditions, p53nac is likely to represent underlying p53 gene mutations and suggests a nonfunctional status of p53. Moreover, detection of abnormal p53 by IHC is a simple and cheap technique to use in clinical settings.

Limitations of this pilot study include that there was not sufficient statistical power to detect modest associations between SES and p53nac. Further, although health insurance information was available from medical records, information on other commonly used measures of SES, such as education and income, was not available. Employment status may not accurately represent a patient’s SES, since information on household income or spouse’s employment was not included in the medical record. Finally, both race and SES have effects on incidence and mortality from CRC (4,19), but, due to our small sample size, we were unable to assess an interaction or effect of race on the association between SES and p53nac.

Despite these limitations, this study is, to our knowledge, the first to investigate the association between SES and p53 status among CRC patients. The possible association found between low SES and p53nac in CRC patients was not as strong as was found for breast cancer patients (11). Future studies should focus on the association between income and education as markers of SES with p53nac and should investigate possible interaction between race and SES. It may be important to determine what exposures related to SES cause abnormalities in p53. Although a small fraction of low SES patients had a higher proportion of p53nac, our findings suggest that it is important to identify the factors that cause molecular abnormalities (like p53nac) in relation to SES factors and to evaluate their role in CRC development and progression. Furthermore, similar studies will aid in understanding the molecular pathobiology of malignancies and in identifying susceptible individuals within high-risk populations.

In 2011, the results were presented as a poster at the 102nd Annual Meeting of the American Association for Cancer Research in Orlando, Florida. Also, we thank Dr. Donald Hill for his critical review of this manuscript.