Underlying mechanism of sorafenib resistance in hepatocellular carcinoma: a bioinformatics study based on validated resistance-related genes

The multi-targeted tyrosine kinase inhibitors (TKIs) including sorafenib, lenvatinib and donafenib showed important roles in the first-line treatment of patients with unresectable hepatocellular carcinoma (HCC). In 2007, sorafenib became the first small-molecule TKI approved for first-line treatment of advanced hepatocellular carcinoma (HCC) (1). Sorafenib is a multi-kinase inhibitor with anti-angiogenic, pro-apoptotic, and anti-proliferative effects that targets vascular endothelial growth factor receptor (VEGFR)-1, VEGFR-2, VEGFR-3, platelet-derived growth factor receptor (PDGFR)-b, c-KIT, FMS-like tyrosine kinase 3 (FLT-3), and RET (1). However, the effects of sorafenib can be compromised (1-4); it has been shown to significantly extend the median survival time of treated patients, but only by 3–5 months. This has largely been attributed to the development of resistance within 6 months (3-6). Combination of sorafenib and cytotoxic chemotherapeutic agents, or molecular targeted agents, or immunotherapeutic drugs were studied to overcome sorafenib resistance in HCC (7).

Bioinformatics analyses have generally been conducted based on hundreds and thousands of DEGs identified from microarrays or RNA sequencing (12). The power of the bioinformatics analysis was determined by the quality and quantity of DEGs involved in the analysis. However, the expression levels of the identified DEGs generally need to be validated by quantitative real-time polymerase chain reaction (qPCR) (14,15), and their role in promoting or inhibiting resistance must be investigated using in vitro or in vivo studies. Due to the limitations of practical capacity, it is difficult to validate the massive number of DEGs identified. Therefore, bioinformatics analysis based on validated resistance driver genes should be conducted. A bioinformatic analysis-based validation of DEGs has not yet been reported. Thus, in the present study, we collected experimentally determined sorafenib-related resistance genes (SRRGs) from publications and performed a SRRG-based bioinformatics analysis to investigate their participation in sorafenib resistance in HCC. We present the following article in accordance with the STREGA reporting checklist (available at https://dx.doi.org/10.21037/jgo-21-377).

Data from Medline and Embase were retrieved using an advanced strategy combining keywords of hepatocellular (hepatic, hepatocellular, or liver), sorafenib, and resistance (resistance or resistant). The search was conducted on 19 November 2018. Studies that focused on resistance-related molecules, both in vivo and in vitro, were eligible. All publications were independently reviewed and evaluated by 2 investigators (LW Zhang and L Fang) according to the abstracts and full texts, if necessary. Genes were investigated with respect to their ability to promote or inhibit the behavior of resistance to sorafenib, and were identified as SRRGs upon validation by genetic or pharmacologic interventions to alter expression levels of genes or proteins in cell lines or animal models of HCC. Disagreements between the investigators were resolved by consensus.

Interactive relationships among SRRGs were evaluated by PPI analysis. The SRRGs were mapped to the Search Tool for the Retrieval of Interacting Genes (STRING) database to construct interactions among genes, and only experimentally validated interactions with a combined score >0.4 were deemed significant. Then, PPI networks were built using the Cytoscape software package (version 3.6.1, National Institute of General Medical Sciences, Bethesda, MD, USA) according to the Molecular Complex Detection (MCODE) (16) and in terms of the function and localization similarity of proteins within predicted complexes with the 2 of degree cutoff, 2 of K-core, 0.2 of node score cutoff, and 100 of maximum depth from seed.

A P value less than 0.05 is statistically significant. 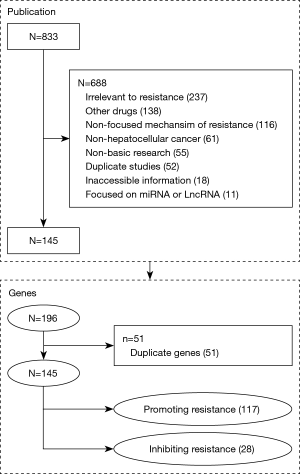 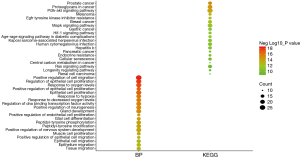 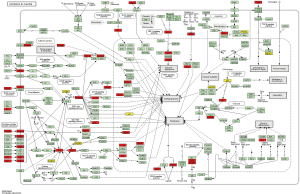 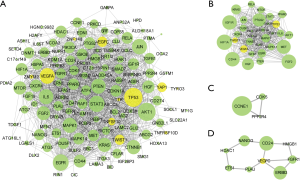 The underlying mechanism of sorafenib resistance has been proposed using bioinformatics analysis based on hundreds, or even thousands of DEGs, from high-throughput methods, such as microarray and RNA sequencing (12,13). However, most of the DEGs were not validated in terms of expression levels or their actual role in resistance. Therefore, in the present study, a comprehensive bioinformatics analysis was conducted based on a collection of experimentally validated resistance-related genes in HCC.

Biological functions including cell proliferation, cell migration, development, response to oxygen levels, EMT, cell skeleton, protein function, and autophagy were proposed as crucial functions related to resistance in this study. This is consistent with the findings of previous studies. Sorafenib acts as an anti-angiogenic agent by reducing microvessel density, promoting intra-tumoral hypoxia, and upregulating hypoxia-inducible factors (HIFs). A hypoxic microenvironment favors resistant cells (8). In addition to anti-angiogenesis, anti-clonogenesis and cytotoxic effects are crucial in the antitumor effects elicited by sorafenib (21). Autophagy has been reported as a controversial role of sorafenib in HCC treatment, where it has been shown to improve the power of sorafenib against HCC cells, or conversely, serve as a protective factor against HCC cells from sorafenib (22). The EMT caused drug resistance across various solid tumors, and was also found to be the main source of sorafenib resistance by reprogramming cancer cells and generating CSCs after sorafenib treatment (23,24).

Pathways related to cell proliferation, apoptosis, immune function, endocrine metabolism, stem cell function, and differentiation were enriched, based on SRRGs. Most recently, many studies have focused on the role of immunosuppression in sorafenib resistance. Immunosuppression-related resistance to sorafenib has been attributed to hypoxia, demonstrated by the upregulated expression of immune checkpoint inhibitor programmed death ligand-1 (PD-L1) (25) and increased infiltration of Gr1+ myeloid-derived suppressive cells, regulatory T cells, M2 macrophages (26), and tumor-associated neutrophils (27), which may be associated with increased SDF1α, CXCR4, CCL2/CCR2, and CCL17 expression levels in tumors (25-29). Modulation of immune responses by combining a CCR2 antagonist with a CXCR4 inhibitor and an anti-PD-1 antibody synergized sorafenib effects through elevated intratumoral infiltration of CD8+ T cells, and increased expression levels of IL-2, TNF-α, and interferon gamma (IFN-γ) (25,26,28,30).

A total of 81 hub genes were identified, among which 2, 12, and 25 were involved in more than 80, 50, and 30 degrees, respectively. The top 3 hub genes, TP53, AKT1, and EGFR, contributed 87, 82, and 69 edges, respectively. Although TP53, a coded tumor-suppressor protein p53, was validated as an SRRG in only 1 study, the sensitivity of sorafenib can be abrogated by p53 knockdown in HepG2 cells and recovered by p53 overexpression in Hep3 B cells (31), and it was identified as the top hub gene. As a transcription factor, p53 is a master regulator of cell cycle arrest, DNA repair, apoptosis, senescence, angiogenesis, autophagy, metabolism, development, stem cell function, and chemoresistance in HCC (32-34). The other 2 top hub genes, EGFR and AKT, have frequently been reported as key molecules causing sorafenib resistance (10). The PI3K/AKT signaling pathway (35,36) and HGF/c-Met/AKT signaling (37,38) are 2 well-known tumor survival mechanisms that play crucial roles in the development and progression of HCC by overcoming sorafenib-induced cell apoptosis and autophagic death (37,38). Blocking AKT increases the sensitivity of HCC cells to sorafenib.

The findings described herein are consistent with previously published reviews (8-10,21-23,39,40), but inconsistent with the bioinformatics analysis based on DEGs conducted by Huang et al. (12). In a previous study, the function of DNA damage and repair, the extracellular matrix, and others (negative regulation of endopeptidase activity, cholesterol homeostasis, fibrinolysis, and platelet degranulation) were addressed (12). The pathways related to complement, lysosome, insulin resistance, metabolic pathways, fat digestion and absorption, ribosome biogenesis in eukaryotes, RNA transport, fanconi anemia pathway, taste transduction, and cell cycle were proposed to be crucial in sorafenib resistance (12). In addition, 8 hub genes (KNG1, VCAM1, APOC3, AHSG, ERBB2, SPARC, VTN, and VIM) were selected in Huang et al.’s study using the same cutoff criterion (>10) (12), and no genes were shared between the two collections of hub genes identified. Compared with our study, a narrow mechanism contributed to sorafenib resistance in Huang’s paper was reported. The clear reasons contributing to this inconsistency are not clear, and may be due in part to individual characteristics of HuH-7 cell.

A comprehensive bioinformatics analysis, based on validated genes, has not yet been published. It was interesting to test a validated molecule-based analysis. As a preliminary result, it seems to have higher statistical power in comparison to an analysis based on DEGs. Some limitations of this study should be addressed. First, the genes were collected from individual studies, which had been validated by different methods, such as genetic or pharmaceutical intervention, based on various cell lines or animal models. The heterogeneity of each study was considered. Moreover, the reported genes tended to focus on ‘popular’ molecules, which had been frequently investigated and reported. Although a comprehensive analysis of the mechanism was provided, this approach does not provide an efficient method to explore novel mechanisms of resistance, as it only includes experimentally validated SRRGs.

In conclusion, the present study identified experimentally validated SRRGs from publications and illustrated the underlying mechanism of sorafenib resistance using bioinformatics analysis based on the SRRGs. Our findings further revealed the mechanisms of sorafenib resistance in HCC and provided potential biomarkers for outcome prediction and novel treatment targets.

Reporting Checklist: The authors have completed the STREGA reporting checklist. Available at https://dx.doi.org/10.21037/jgo-21-377

Conflicts of Interest: All authors have completed the ICMJE uniform disclosure form (available at https://dx.doi.org/10.21037/jgo-21-377). The authors have no conflicts of interest to declare.