Esophageal cancer is the sixth leading cause of cancer-related deaths worldwide due to its high malignant potential and poor prognosis (1). Biologically, the malignancy has evolved from predominantly squamous cell carcinoma (SCC) to adenocarcinoma. Surgery remains the mainstay of treatment for esophageal cancer, and its efficacy has dramatically improved in recent years with advances in surgical procedures and perioperative management. Based on the frequency and extent of lymph node (LN) metastasis and its significance to survival, controlling LN metastasis is a reasonable treatment strategy. Therefore, an extended LN dissection such as three-field LN dissection (3FD) is often mandatory. Numerous reports have demonstrated the superiority of 3FD over two-field dissection. However, the need for 3FD remains controversial due to its large surgical extent, challenging maneuvers, and frequent postoperative complications (especially hoarseness and aspiration pneumonia following dissection of left and right laryngeal recurrent nerve (LRN) LNs (2).

Stage T1a esophageal cancer is confined to the mucosal layer and stage T1b lesions are confined to the submucosal layer. Currently, most guidelines recommend endoscopic treatment for stage Ia esophageal cancer, whereas surgery is the main treatment for stage Ib lesions. Since stage T1b esophageal cancer is an early localized lesion, whether patients should undergo 3FD or which LN groups should be removed have become popular research topics. In this study, we retrospectively analyzed the clinicopathological data of 254 patients with stage T1b mid-thoracic esophageal squamous cell carcinoma (ESCC) who underwent the McKeown procedure (“tri-incisional esophagectomy”) and 3FD at Fujian Cancer Hospital from January 2010 to December 2015, with the aim of identifying the LN metastasis of stage T1b ESCC and the clinical value of LN dissection. We present the following article in accordance with the STROBE reporting checklist (available at https://dx.doi.org/10.21037/jgo-21-339).

The study was conducted in accordance with the Declaration of Helsinki (as revised in 2013). The present study was approved by the Fujian Cancer Hospital Ethics Committee (YKT2021-011-01), and the informed consent was signed by all patients before undergoing surgery. The clinicopathological data of 254 patients with stage T1b mid-thoracic ESCC who underwent the McKeown procedure and 3FD at Fujian Cancer Hospital from January 2010 to December 2015 were retrospectively collected. Of these, 192 were men and 62 were women, aged 51.0–63.0 years (median: 58.0 years) (Table 1). Preoperative barium esophagogram, chest CT, abdominal ultrasound, and gastroscopic pathological biopsy were routinely performed to confirm the diagnosis. All patients were naive to neoadjuvant radiochemotherapy. 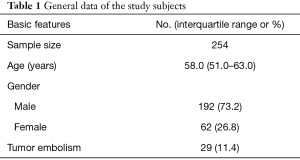 All patients underwent the McKeown procedure (subtotal transthoracic esophagectomy, laparotomy, and cervical esophagogastrostomy) and cervico-thoraco-abdominal (three-field) LN dissection (3FD). The extent of LN dissection included: mediastinal LNs [including the right recurrent laryngeal nerve (RLN), left RLN, subcarinal, right and left hilar, and upper/middle/lower esophageal segments]; abdominal LNs (mainly LNs near the gastric cardia, lesser curvature of stomach, and left gastric artery); cervical LNs (mainly the right and left supraclavicular LNs and cervical paratracheoesophageal LNs). Since the cervical paratracheoesophageal LNs were distributed along the left and right RLN and most of them could be removed during chest surgery, the right and left cervical paratracheoesophageal LNs were classified as left and right RLN LNs, respectively. In addition, no metastasis to the right or left hilar LNs was noted in our current study. R0 resection was achieved in all patients, and all cases were followed up for more than 5 years.

Statistical analyses were performed using the SPSS 25.0 software package. The clinical value of LN dissection was evaluated using the efficacy index (EI), which was proposed by Sasako et al. (3). The EI was calculated by multiplying the frequency (%) of metastases to a station and the 5-year survival rate (%) of patients with metastases to that station, and then dividing by 100. A P value of <0.05 was considered statistically significant.

Despite improved treatment outcomes owing to advances in multidisciplinary therapies, the overall prognosis for esophageal cancer remains poor. Given that the esophagus has abundant lymphatic channels in the submucosa, cancer cells can spread rapidly, and therefore, esophageal cancer can spread easily in early stages (4). 3FD was developed by Japanese surgeons in the 1980s, and is now accepted worldwide as one of the standard surgical approaches for expanded LN dissection (5). However, 3FD may increase postoperative complications. In particular, dissection of the bilateral LRNs and supraclavicular LNs may impair the swallowing and cough reflexes. Also, Yasuda et al. found that laryngeal elevation was significantly impaired after 3FD (6). Nakamura et al. retrospectively compared postoperative dysfunction after two-field versus three-field LN dissection in patients undergoing esophageal cancer surgery, and found that 3FD was associated with greater postoperative gastrointestinal dysfunction (e.g., decreased physical activity, symptoms of reflux, and passage dysfunction) compared to two-field LN dissection (7). Thus, evidence of the superiority of 3FD remains unconvincing.

Meanwhile, the McKeown procedure is becoming the dominant procedure in today’s esophageal cancer surgery with the adoption of minimally invasive esophagectomy (MIE) over the past two decades, demonstrating good performance in two-field LN dissection (8). However, for most operators, it is often a difficult decision to remove specific LN stations when performing MIE. Stage T1 esophageal cancer is still early localized lesions, and most stage T1a patients are treated by endoscopic submucosal dissection (ESD), while stage T1b patients are treated predominantly by surgery. Biologically, stage T1b esophageal cancer can be detected early, and the probability of LN metastasis is low. The esophagus has abundant lymphatic channels in the submucosa, and there remains a certain rate of LN metastasis. Our current study retrospectively analyzed the previous open surgeries performed in our center to investigate the LN metastasis of stage T1b mid-thoracic esophageal cancer and explore the value of LN dissection for different LN stations, so as to inform intraoperative LN dissection (or not).

During 3FD, the difficulty of LN dissection varies among different sites due to the differences in anatomical locations. For example, LNs that can be routinely dissected (e.g., upper, middle, and lower paraesophageal LNs, paracardiac LNs, subcarinal LNs, LNs near the lesser curvature of stomach, and LNs adjacent to the left gastric artery) are generally easy to remove. In contrast, dissection of LNs such as the right and left RLN LNs and supraclavicular LNs are more challenging and can be associated with a high incidence of complications. Therefore, in our current study, the levels of LN metastasis and the corresponding EI values were observed to determine the necessity and extent of dissection. It was found that stage T1b mid-thoracic ESCC had the highest rate of metastasis in the paracardiac LNs (4.3%), followed by the right RLN LNs (2.8%) and the left gastric artery LNs (2.8%). Therefore, dissection of abdominal LNs is valuable for patients with stage T1b ESCC. Also, metastasis to the right RLN LNs may be associated with abundant longitudinal lymphatic drain in the submucosa of the esophagus (9).

Reporting Checklist: The authors have completed the STROBE reporting checklist. Available at https://dx.doi.org/10.21037/jgo-21-339

Conflicts of Interest: All authors have completed the ICMJE uniform disclosure form (available at https://dx.doi.org/10.21037/jgo-21-339).The authors have no conflicts of interest to declare.

Ethical Statement: The authors are accountable for all aspects of the work in ensuring that questions related to the accuracy or integrity of any part of the work are appropriately investigated and resolved. The present study was approved by the Fujian Cancer Hospital Ethics Committee (YKT2021-011-01), and the informed consent was signed by all patients before undergoing surgery. The study was conducted in accordance with the Declaration of Helsinki (as revised in 2013).