Gastric cancer is one of the most common malignancies and is a major cause of cancer-related deaths worldwide (1). Early gastric cancer (EGC) is defined as cancer tissue confined to the gastric mucosa or submucosa, regardless of lymph node metastasis (LNM) (2). Recently, with the development of endoscopic techniques, endoscopic submucosal dissection (ESD) has been widely applied in EGC without LNM. Therefore, the LNM rate of EGC is the main factor determining whether ESD can be performed. ESD is developed from endoscopic mucosal resection (EMR). The lesions located in the mucosal layer are separated from the base layer and removed completely by means of electric knife and other separation tools. The use of ESD in EGC surgery can achieve the effect of radical resection of tumor and effectively reduce postoperative tumor residue and recurrence. On the basis of the Japanese Classification of Gastric Carcinoma (JCGC), gastric cancer can be divided into differentiated and undifferentiated types, and tumors with a mixture of the two types are classified in accordance with the major histological type (2). Recent studies have proven that the risk of LNM is negligible in differentiated and undifferentiated tumors that meet certain criteria. Thus, the ESD indications are expanding to EGC with larger sizes, with ulcers or superficial submucosal invasion (3-5). However, the risk of LNM in mixed EGC remains controversial, and no agreement has yet been reached on the ESD indications for mixed tumors. Some studies reported that the absolute or expanded indications of ESD for pure differentiated or undifferentiated EGC could be applicable to mixed predominantly differentiated- or undifferentiated-type EGC (6,7). Several recent studies have reported that histological mixed-type EGC has a greater risk of LNM than the undifferentiated type (8-10), and ESD might not be suitable for mixed-type tumors. In addition, mixed gastric cancer contains heterogeneous types of cells which may possess different biological behaviors. Although there have been some studies on the LNM of histologically mixed-type EGCs, the behavior of moderately-poorly differentiated adenocarcinoma, which is the most common mixed-type histology of EGC, has not been reported separately. Furthermore, no study has addressed the differences in LNM between mixed predominantly moderately differentiated (MMD) type and pure moderately differentiated (PMD) adenocarcinoma, as well as mixed predominantly poorly differentiated (MPD) type and pure poorly differentiated (PPD) adenocarcinomas. The objective of the present study is to explore the clinicopathological characteristics of mixed-type EGC, and to investigate the ESD indications for MMD and MPD in Chinese patients. The pathological types involved in this paper are relatively comprehensive, including PMD, MMD, MPD and PPD. The conclusions are convincing.

We present the following article in accordance with the STROBE reporting checklist (available at https://dx.doi.org/10.21037/jgo-21-462).

We identified 10,024 consecutive patients who underwent radical gastrectomy and were diagnosed with gastric cancer according to postoperative pathology between March 2012 and July 2020 at the First Affiliated Hospital of Wannan Medical College. A total of 812 (8.1%) patients who were diagnosed with EGC by postoperative pathological examination were retrospectively analyzed (Figure 1). 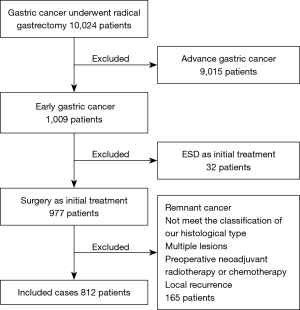 All procedures performed in this study involving human participants were in accordance with the Declaration of Helsinki (as revised in 2013). The study was approved by ethics board of First Affiliated Hospital of Wannan Medical College (No.: 2012-004). Individual consent for this retrospective analysis was waived.

Clinicopathological factors were analyzed, including gender, age, location, tumor size, depth of invasion, ulceration, macroscopic type, lymphovascular invasion (LVI), and LNM. On the basis of the treatment guidelines of the Japanese Gastric Cancer Association (JGCA) (2), the location of gastric cancer was separated into upper, middle, and lower thirds. Based on the Paris endoscopic classification of superficial tumor lesions, we defined the macroscopic types of tumors as elevated type (0-I and 0-IIa), flat type (0-IIb), and depressed type (0-IIc and 0-III) (11). We divided the depth of invasion into three different categories: M (mucosa), SM1 (submucosal <500 μm), SM2 (submucosal ≥500 μm). The submucosal invasion depth was measured from the lowest point of the muscularis mucosa to the deepest tumor invasion point. 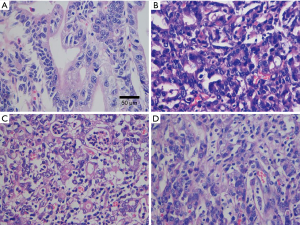 Statistical analyses were performed with the software SPSS 26.0 (SPSS, version 26.0, Chicago, IL, USA). The chi-squared test or Fisher’s exact test was used to compare the categorical variables. Student’s t-test was performed to compare the two groups of continuous variables. The multivariate logistic regression model was applied to analyze the independent risk factors for LNM in EGC. P<0.05 was considered statistically significant. 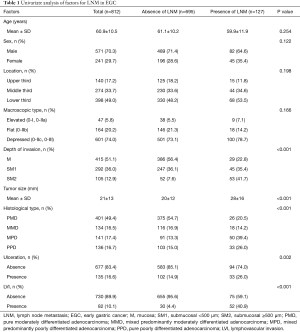 Univariate and multivariate analysis of LNM risk factors in EGC 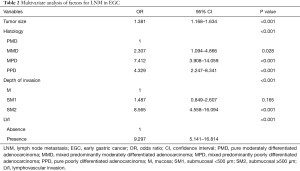 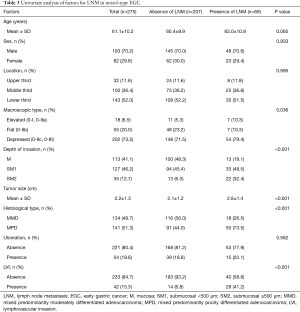 Comparison of LNM rates in EGC according to indications for ESD

LNM is a key factor in selecting the suitable treatment modality for EGC (4). Histological differentiation is an independent risk factor for LNM and probably assists in deciding the appropriate treatment strategy for EGC (12-14). ESD is widely used in the treatment of submucosal lesions of upper digestive tract. Endoscopic therapy can effectively treat EGC and has gradually become the first-line treatment of EGC with the increasing maturity of ESD technology. The ability of life and quality of life of patients with EGC have been significantly improved. However, gastric cancer tissues usually have a mixed-type histology with both undifferentiated and differentiated components. Studies have proven that mixed-type EGC is more aggressive than pure-type EGC (15,16), while some studies have shown that ESD under the expanded criteria could be applied to certain mixed-type EGCs (17,18). However, the studies did not distinguish the various components of differentiated or undifferentiated EGC, which may have individual biological behaviors. Our study analyzed the clinicopathological features and LNM risk factors of the most common mixed-type EGCs of moderately-poorly differentiated adenocarcinoma, and clarified the applicability of ESD for this mixed-type EGC in Chinese patients.

Our study demonstrated that the total LNM rate was 15.6% in EGC, and clinicopathological features submucosal invasion, tumor size, and LVI were independent risk factors for LNM, which was in accordance with several previous studies (19-21). As the multivariate analysis revealed that histological type was one of the independent predictors for LNM in EGC, we further performed a subgroup analysis of clinicopathological features and LNM risk factors in mixed-type EGC. Parallel with a recent study (22), we found that LNM occurred more often in mixed-type EGC (24.7%) than in EGC which included only the two pure types (11.0%).

Tumor size has been recognized as an independent risk factor for LNM in EGC in some studies (19,23,24), and we gained the same conclusion in mixed-type EGC. Our data showed that MPD had a higher LNM rate than MMD which was in accordance with a recent study (25). This indicated that the higher the proportion of poorly differentiated components, the higher the risk of LNM in mixed-type EGC. Chu et al. found that the deeper the tumor invasion, the higher the LNM rate (24). In line with this study, we also found that depth of invasion was an independent risk factor for LNM in mixed-type EGC, and patients with SM2 invasion tended to have a higher LNM rate compared to patients with mucosa or SM1 invasion (P=0.008). Regarding LVI, many studies have shown that LVI is an extremely important independent factor for LNM in EGC, and our research also proved that mixed-type EGC with LVI had more aggressive behavior than in patients without LVI (21).

Tumor size, histology, invasion depth, and LVI are independent risk factors for LNM in mixed-type EGC. The absolute indications for ESD are applicable to MMD, and the feasibility of the expanded indications for ESD in MMD and MPD requires further investigation in Chinese patients. The limitations of this study include its retrospective and single-center nature. Another limitation of the study was that the sections of the surgically resected specimens were prepared at 5-mm intervals for pathological diagnosis, while ESD specimens were prepared at 2-mm intervals. Prospective studies regarding the long-term prognosis of post-ESD patients with mixed-type EGC are necessary to establish the standard treatment. However, this study includes continuity of clinical cases treated in the third-class hospital of Wannan region of Anhui Province over a period of 10 years ensuring a meaningful investigation.

In conclusion, our results demonstrated that it was feasible to use the current absolute indications for ESD in cases of MMD, and the feasibility of the expanded indications for ESD in MMD and MPD requires further investigation in Chinese patients. We recommend quantitative evaluation and careful consideration when deciding whether mixed-type EGC patients need additional surgery after ESD.

Funding: This work was supported by the Anhui Province Key Research and Development Program Project (grant number: No. 201904a07020028).

Reporting Checklist: The authors have completed the STROBE reporting checklist. Available at https://dx.doi.org/10.21037/jgo-21-462

Conflicts of Interest: All authors have completed the ICMJE uniform disclosure form (available at https://dx.doi.org/10.21037/jgo-21-462). The authors have no conflicts of interest to declare.

Ethical Statement: The authors are accountable for all aspects of the work in ensuring that questions related to the accuracy or integrity of any part of the work are appropriately investigated and resolved. All procedures performed in this study involving human participants were in accordance with the Declaration of Helsinki (as revised in 2013). The study was approved by ethics board of First Affiliated Hospital of Wannan Medical College (No.: 2012-004). Individual consent for this retrospective analysis was waived.